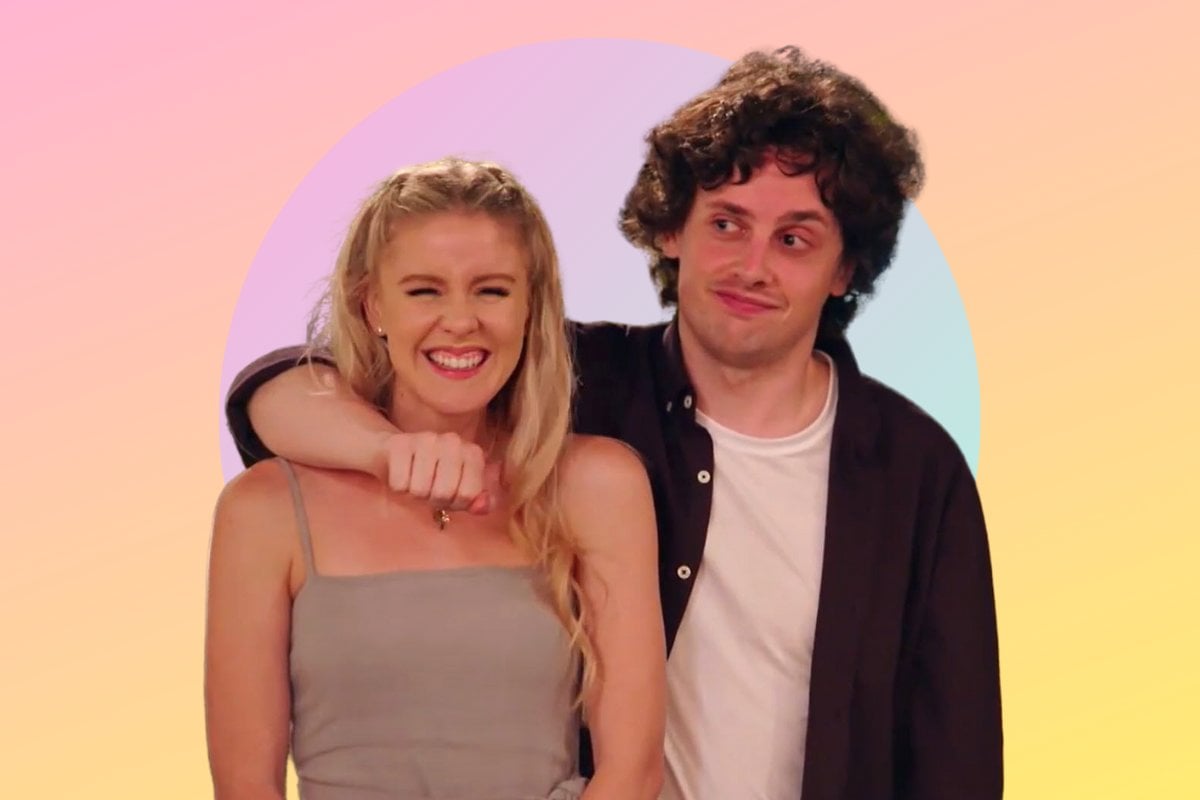 HECK. It's been seven years, but this semi-problematic yet highly entertaining show is back!

A man tells us that in the year 2021, there is a new brand of superhero. This sounds very exciting, and much needed. Does this superhero fly around the country dropping off vaccines? Are they COVID-resistant? Can they destroy a virus just by looking at it?

Ah, no. They're just this year's geeks. 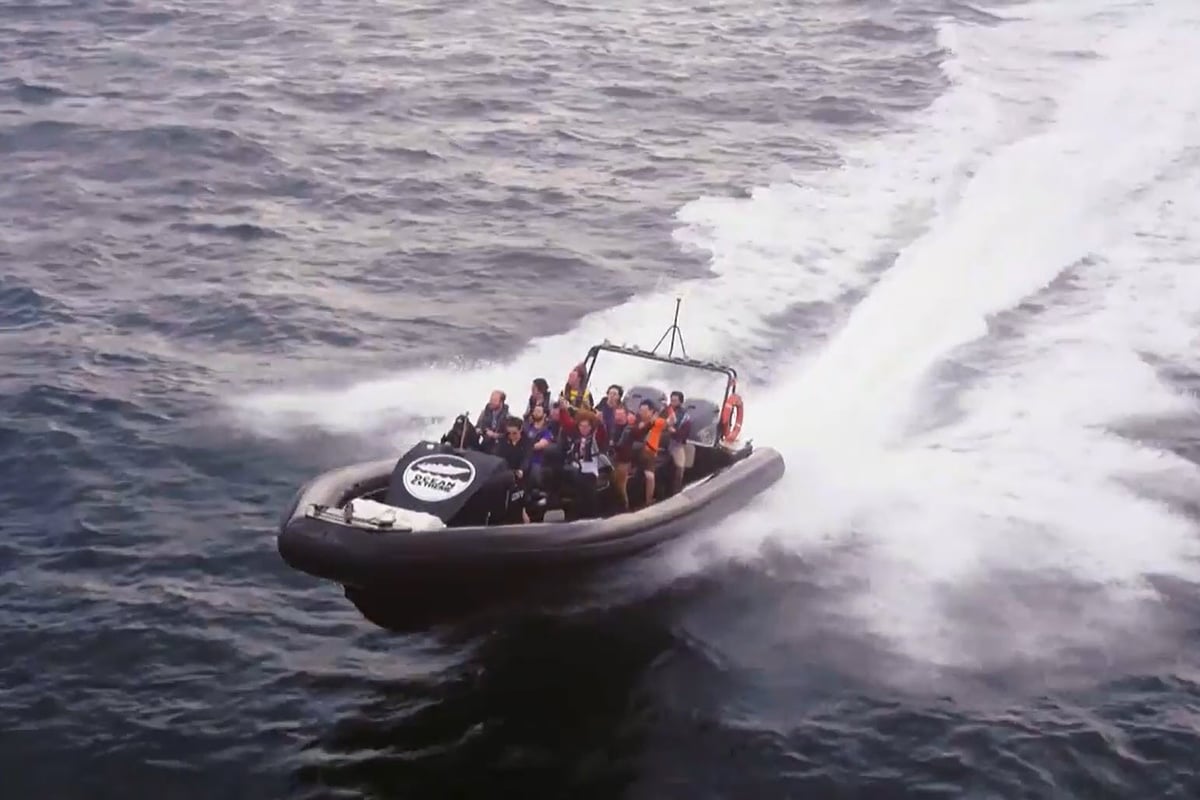 One of the geeks is complaining about how he shaved for this, and TRUST ME SIR EVERY WOMAN WHO HAS EVER BEEN ON A DATE UNDERSTANDS YOUR STRUGGLE.

On dry land, Sophie Monk meets the beauties and they are all seem nice. I'm not being sarcastic. They all seem genuinely really nice, AND THIS FEELS SO WEIRD FOR A REALITY TELEVISION SERIES.

We are only minutes into this show but it's already so wholesome?? I kind of love it?? Maybe we will make it through an episode of reality television without anyone uttering the words "here for the right reasons".

Sophie is trying to tell us about her fiance but she cannot get the words 'neurosurgical robotics consultant' out of her mouth, and seriously same. I just Googled the words, spelt very incorrectly, and copy and pasted my clever computer's correction because what in the actual hell is that?

The geeks dramatic Navy Seal entrance is somewhat ruined by a cameo from one of Sydney's ugly ferries, but YAY IT'S TIME FOR EVERYONE TO MEET.

Eliza tells us all about the tans she enjoys, and then waits 10 years for her geek, Alexander, to get off the boat.

He's a math teacher with a South African accent and interesting ties. He also says the word "bazinga"... in real life.

Next up is actual princess Ashleigh, who is paired with Mitchell, the guy who can't believe he shaved for this. He says he was bullied at school and video games provided him a safe space, so he really bloody loves them.

I love him unconditionally.

Ashleigh compliments him on wearing purple, her favourite colour and Mitchell simply says... nothing. 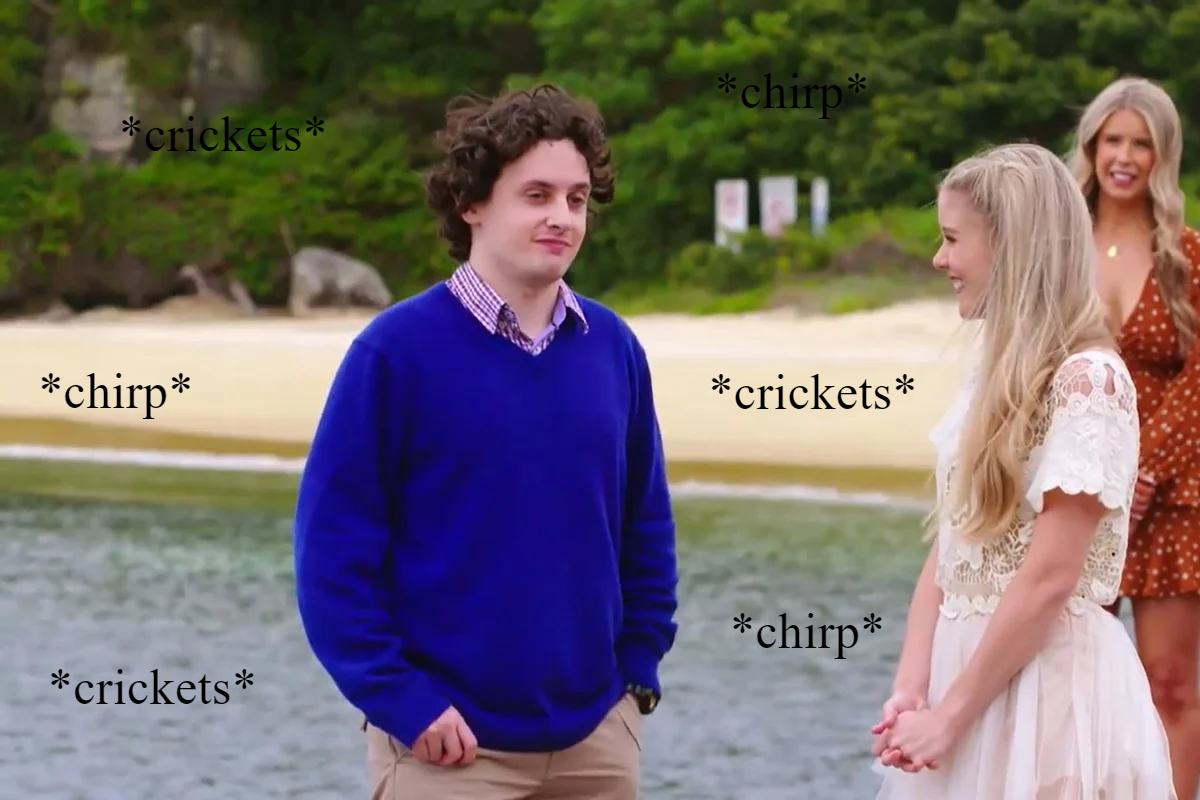 We then meet Kiera who 1. works in a courtroom and 2. once brought home a guy who her police officer father had once arrested. SWEETIE WHY DOES EVERYTHING IN YOUR LIFE CIRCLE BACK TO BREAKING THE LAW.

She is paired with Superman James and all the other beauties are jealous because honestly, he's a bit of a hottie.

The other miscellaneous beauties and geeks are quickly paired up and look... the Bachelor and Bachelorette red carpets should take some notes. I would like to see a man meet Osher while swinging nun chucks or screaming like a wrestler, please.

I feel a spiritual connection to Leticia who says she would probably just die in a zombie apocalypse, because this is a hill I have been willing to die on for YEARS.

WHY WOULD I WANT TO SURVIVE? IT JUST SOUNDS SO HARD WITH VERY LITTLE REWARD. 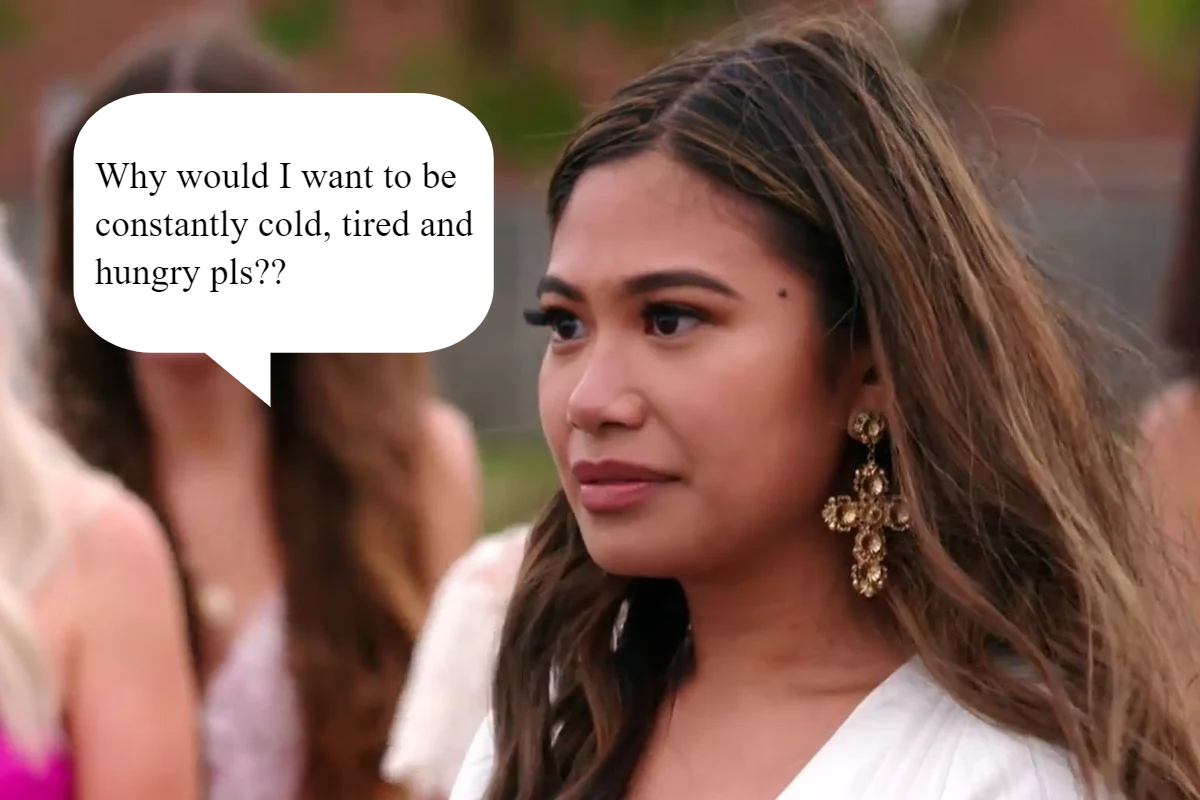 WHAT WOULD BE THE POINT?? Image: Nine.

Sophie tells us she's going to do some ol' switcheroos of the pairs if she wants, and then WOO THIS DATING SHOW/COMPETITION/SOCIAL EXPERIMENT IS UNDERWAY.

The first challenge involves... pretending they know lots of things about seals.

Alexander says it's good to be thrown in the deep end, except for when you're throwing children who cannot swim. So true.

As it turns out, most of them are very good at pretending they are experts on semi-aquatic mammals. The range!

Leticia and George are the first winners, because even though she wouldn't want to survive a zombie apocalypse, she took being picked on by a splashy seal really well: 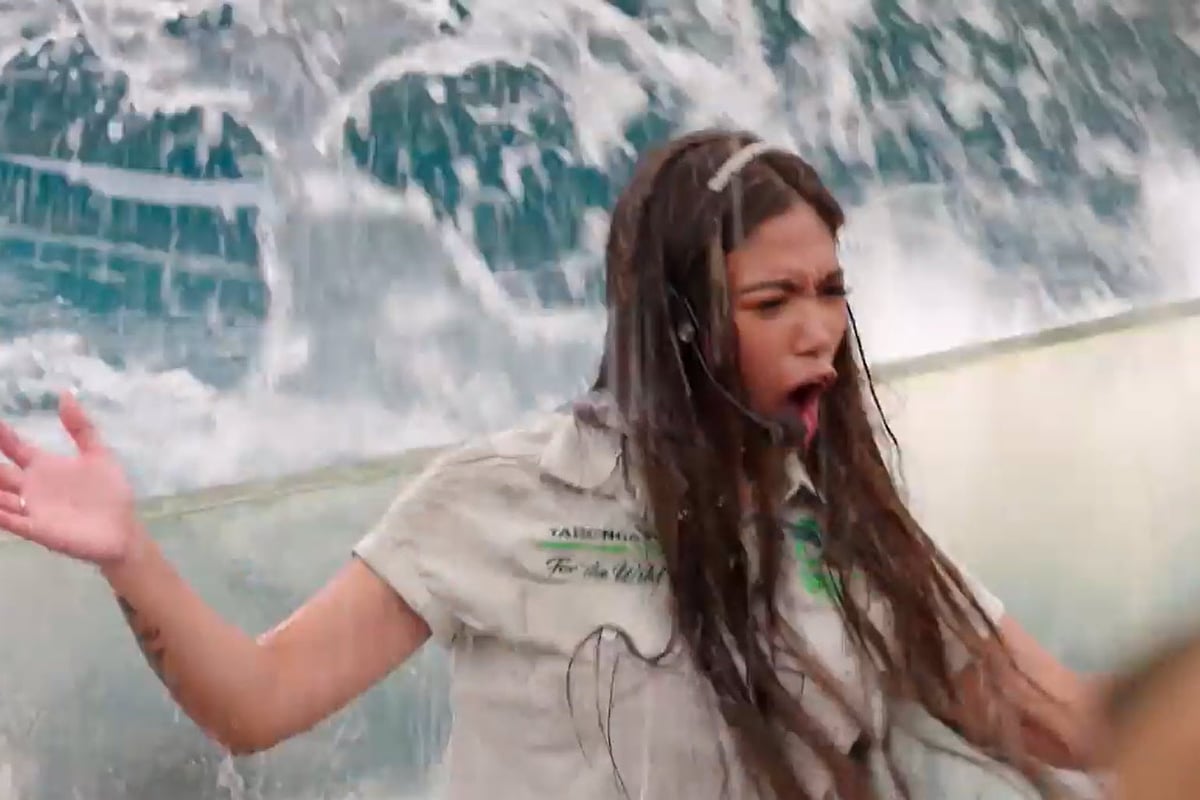 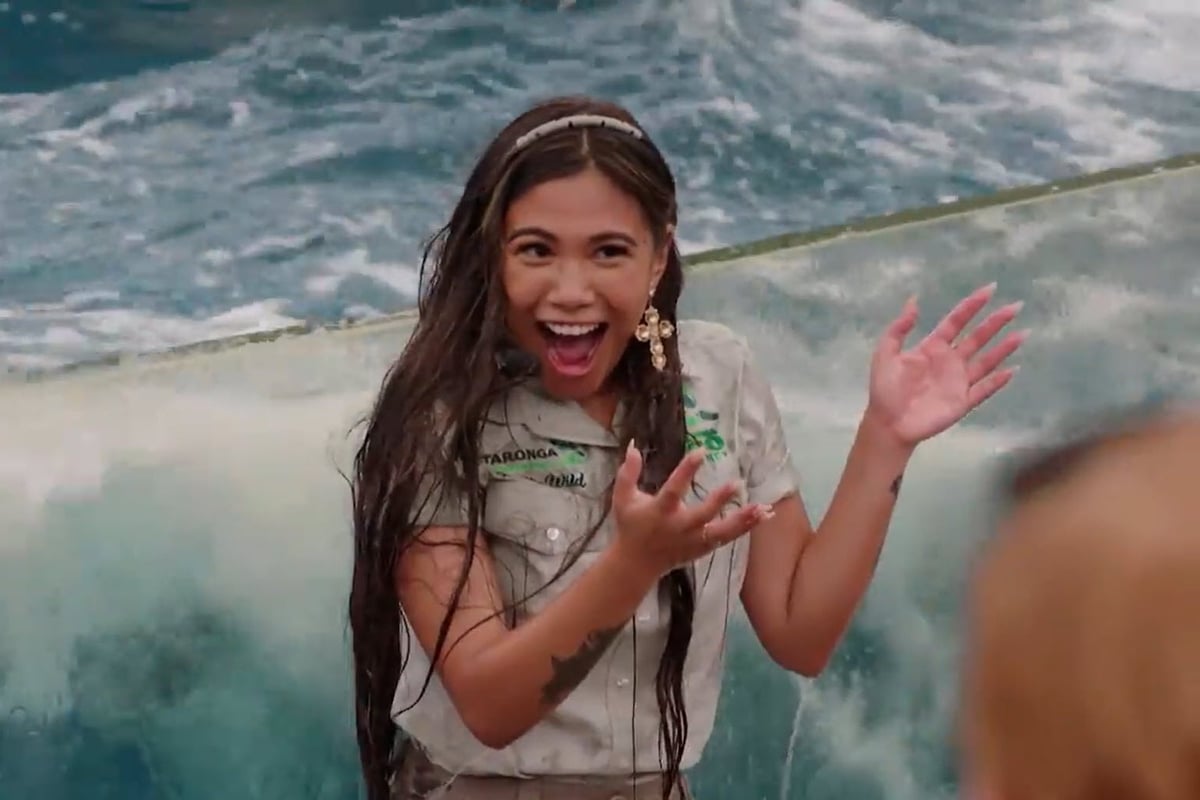 Ashleigh and Mitchell are also named winners, which I think is all down to how Mitchell took the role so seriously he decided to cosplay AS A SEAL. 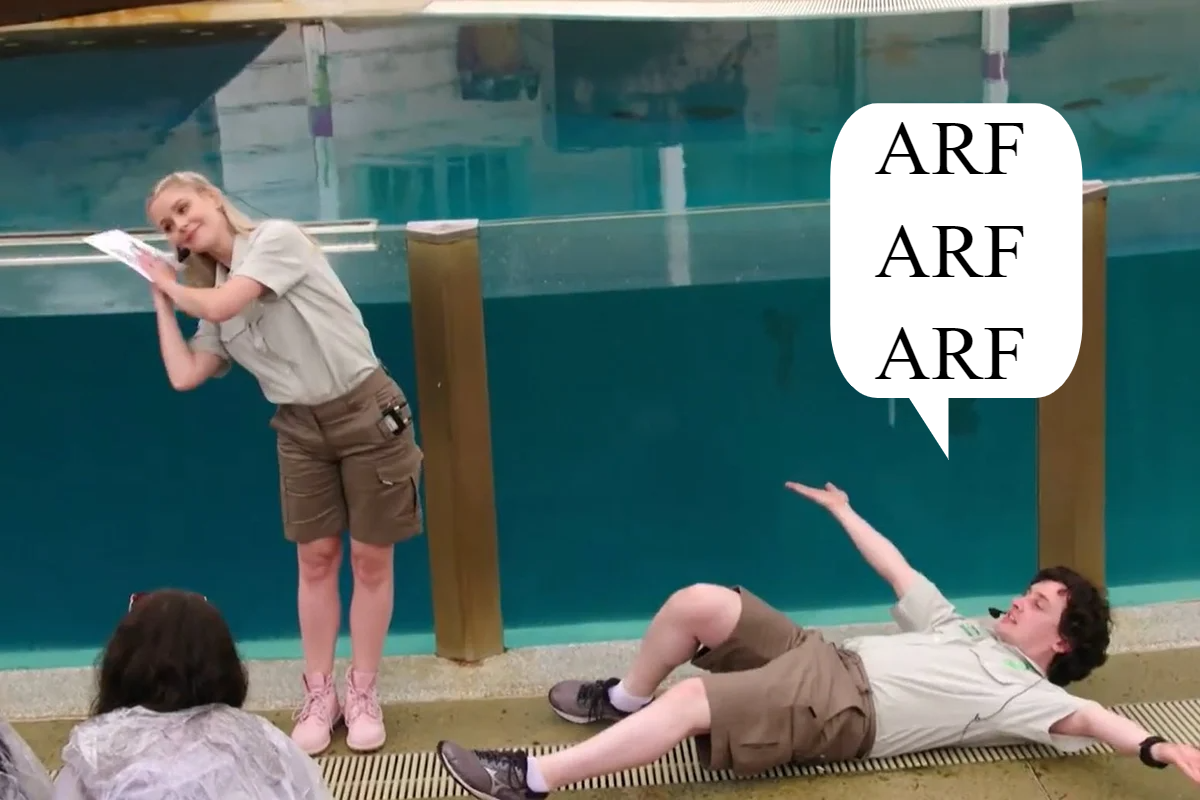 YOU'RE DOING SO WELL. Image: Nine.

The group then change out of their fish-smelling khakis and settle into their fancy apartments.

To get comfortable, they order more... coat hangers and PLAY WITH THEIR PET LIZARD WHO ABSOLUTELY DID NOT CONSENT TO BEING HERE?????????? 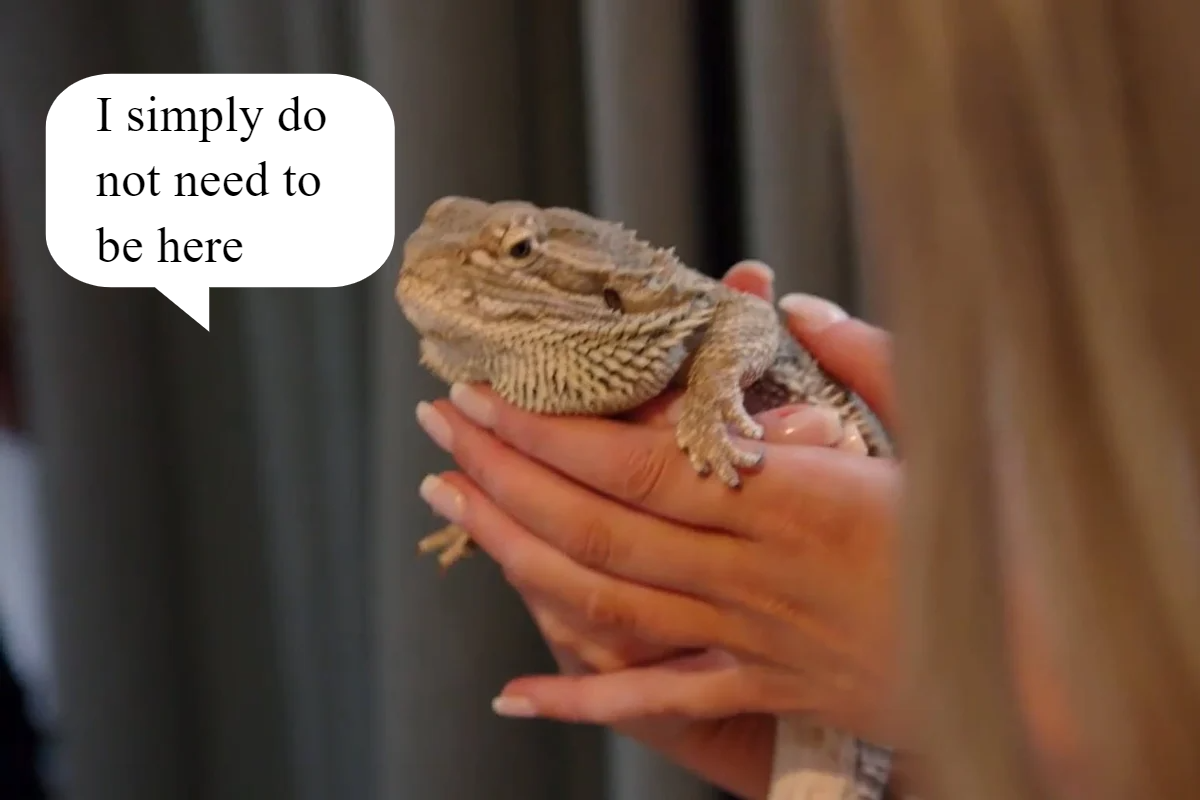 Leticia hurts her toe, proving once again her commitment to this show by providing a wonderful segue for us to formally meet loud wrestler but also qualified doctor, Frank.

Frank and his beauty, Aira, discuss the "wedding" between Leticia's toes and oh my GOD, PLEASE SOMEONE JUST TELL HER.

Okay this is all very interesting but come on pls, we want to see the dates.

OOOH. George and Leticia are doing martial arts on their date because George... likes... them.

Leticia enjoys George's front flips and muscles and it's all pretty wholesome, actually.

Meanwhile, Mitchell is about to go on his very first date ever!!!!

He and his sunnies meet Ashleigh at the arcade, and HE DOES A SUPER SMOOTH LEAN ON THE WALL WHEN SHE ARRIVES?? AND HE LOOKS LIKE HE'S IN GREASE?? KILLIN' IT MITCHIE. 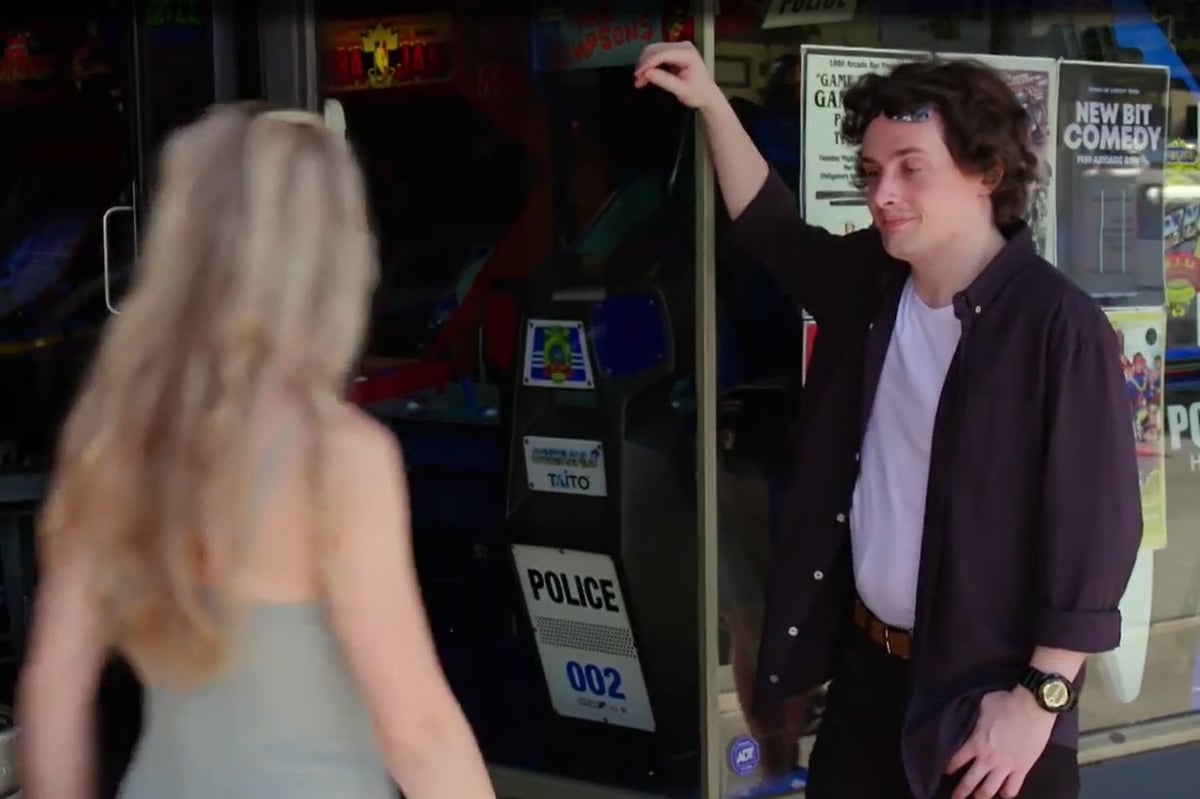 Ashleigh is human sunshine and gets Mitch to open up a bit, and SORRY BUT I REALLY DIDN'T EXPECT THIS TO BE SO WHOLESOME.

Goodness, it's 'mixer' time and all the beauties want to steal Superman James from Kiera.

Aira tells us her party trick is singing with her mouth closed and I swear, rebooting this show was worth it just for this. I will never forget it. Imagine doing that on national television.

Sophie tells them there will be re-pairings at the end of the night, and if she takes Ashleigh away from Mitchell WE RIOT.

Dr Frank toasts to various medical terms, and then IT'S MINGLING TIME.

Eliza makes a move on James and Kiera is concerned about it, but it's literally the most tame 'drama' I've ever seen on reality television.

NO ONE EVEN THREW A WINE GLASS OR A FRUIT BOWL.

And with that, it's re-pairing time!!

Sophie lines then up and then one by one, shuffles them about.

Angel Mitchell talks about how much he enjoyed his date with angel Ashleigh, and BLESS THEY GET TO STAY TOGETHER.

George and Leticia remain together too, and then a bunch of others we... don't know yet are shuffled. ¯\_(ツ)_/¯

OOOH BUT IT'S TIME TO SEE WHAT HAPPENS TO SUPERMAN JAMES.

He's staying with Kiera, leaving Eliza to stick with Alex.

Was that the most wholesome two hours of reality TV you've ever seen?

SEE YOU ALL BUT SPECIFICALLY MITCH TOMORROW NIGHT!