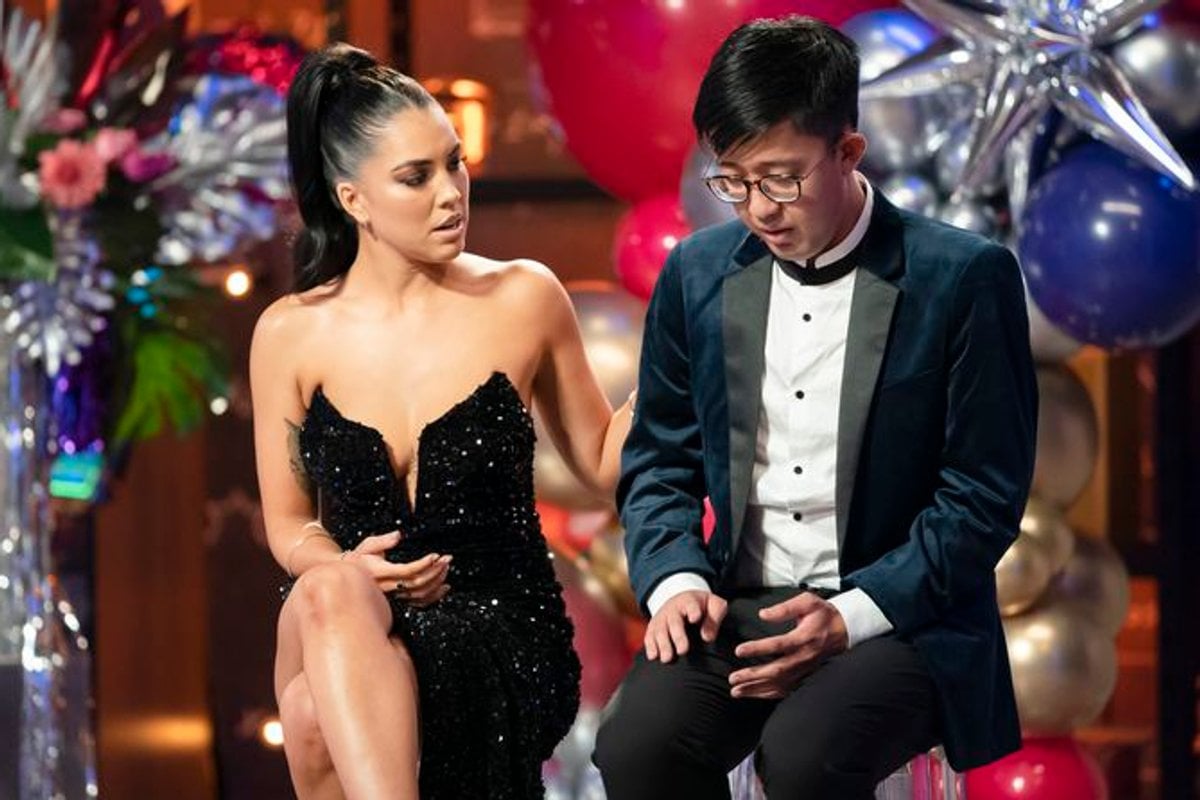 TV's most wholesome reality show has wrapped up for another year, and our cups are feeling full.

After weeks of heart-stopping moments and epic challenges, three final couples stood before us last evening as they eagerly waited to see who would be crowned the winner of Beauty and the Geek 2022.

As per usual, the show has given us plenty to discuss – from the major transformations that left jaws on the floor, to the devastating eliminations each week.

Watch the trailer for Beauty and the Geek. Post continues after video.

There have also been plenty of confessions, behind-the-scenes gossip and questions over which Beauty and Geek have stayed together.

Here's everything that has gone down since the final episode of Beauty and the Geek 2022.

ICYMI, Karly and Aaron took out the win this year.

The pair were up against Anthony and Tegan and Christopher and Bri, who all took part in the last challenge – which required them to make a heartfelt pitch about their growth on the show.

When it was announced which Beauty and Geek would be taking home the massive $100,000 prize, not even Sophie Monk had a dry eye. 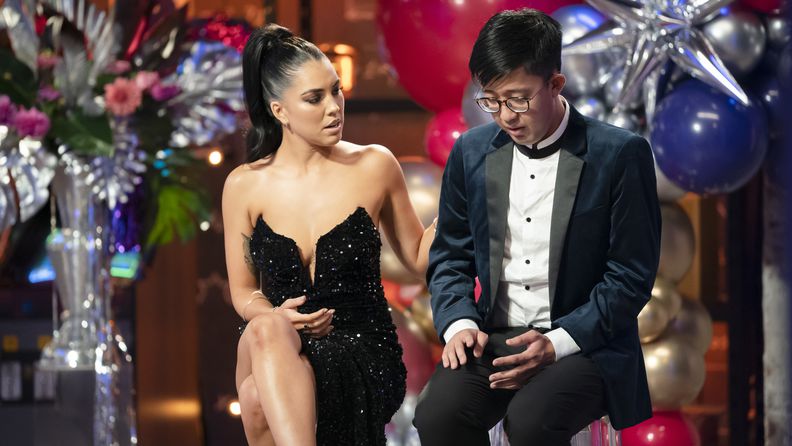 Aaron and Karly on Beauty and the Geek. Image: Channel 9.

"I wouldn't be where I am today without you, you've come into my life and impacted it in the most positive way possible," Aaron told Karly.

"I now know what it feels like to be loved and have people genuinely care about you. Now when I'm looking into that mirror, I no longer see average, I see awesomely amazing… with a touch of hotness and sexiness."

Karly then told her partner that he had helped her realise her true value after admitting she had never felt good enough.

"You have accepted me for exactly who I am. You've taught me it's OK to be strong and soft at the same time. I'm so grateful for you," she said.

And the winners of Beauty and the Geek 2022 are... 👑 #BATG pic.twitter.com/cMiGZZ2KZK

In one of the most surprising moments of the finale, Aaron then popped out the (fake) teeth in his mouth, admitting he had lost them during a sporting accident in high school.

"Originally I was afraid to show it but this experience has given me so much more confidence, and what I'm planning to do is use that money towards fixing everything and making myself feel better," he told the group.

Aaron and Karly reveal how they plan to spend their prize money.

The Geek said during the finale that he plans to spend his winnings from the prize money to get his teeth fixed.

"I'm planning to use the prize money to go towards dental work, so that's mostly what it's going to go to. I'm planning to get proper implants," he told 9Entertainment.

"Whatever is left over is going to be used to fly around to go and see everyone. Just because the show might be over doesn't mean the friendships are," Aaron added.

Karly said she also plans to use some of her money to travel and eventually put a deposit down for a home.

"I would love to be able to take my family on a little holiday, especially my mum," she explained.

Which couples from Beauty and the Geek 2022 are still together?

Are Tara and Michael still together? It looks like it.

After sparks flew from the get-go for Tara and Michael, they quickly became a favourite for viewers at home.

Wholesome bonding aside, the pair were booted from the show during the semi-finals.

In a joint Instagram post, Tara and Michael wrote: "We have had an absolutely incredible time, have been able to have once-in-a-lifetime experiences and have found connections that will carry us through the rest of our lives."

They added: "We can both walk away tonight saying it has been the best experience of our lives. We are grateful for every moment we had."

Michael's friend and contestant Jason also took to Instagram to share how the pair's romance had blossomed: "I still remember right after the first mixer, sitting next to Michael in his love-struck state. I was so incredibly happy for my new friend. I feel so lucky to have had front-row seats to this genuinely beautiful connection. Can't wait to see what the future holds for both of you," he wrote.

Are Mike and Heidi still together? No, they're not.

Heidi and Mike were one of the few couples who had romantic moments while they filmed the show together.

We watched them as they shared their first kiss and even when Heidi took Mike home to meet her family.

Sadly, Mike told 9Entertainment that they didn't continue their relationship outside of the show.

"Things pretty much ended as soon as things ended on the show. We went back and it kind of just ended from there," he said. "She just said she wasn't ready to keep things going."

He added that they still remain good friends, despite the breakup.

"I still love her, but not in the way that everyone wishes. We're still really good friends and that's all that matters... as long as I didn't lose her, I didn't care," he said.

Mike also revealed that they have kept a close bond, and he's travelled to see Heidi multiple times.

"I've been to Melbourne three times since the show ended and I've caught up with her every single time, so there's nothing bad between Heidi and I," he said.

Are Angelique and Sam still together? We don't think so.

While Angelique and Sam had an instant bond on Beauty and the Geek (and even shared the very first kiss of the season), reports say the pair did not continue dating outside of the show. 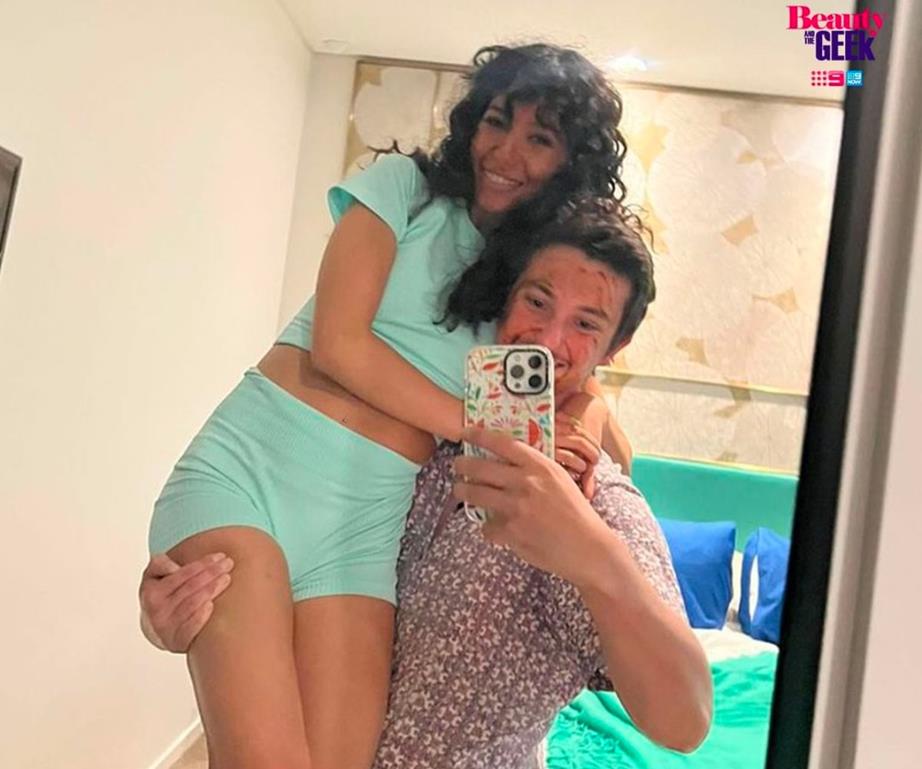 However, it looks like they have kept close, with Sam telling Now To Love that they still "talk a lot".

"I won't go into too much detail because I want everyone to see it when it comes out. Because it's very fun," he told the publication, before adding they didn't want to share any details before the final winners were announced.

"But we do still talk a lot. It's still very good."

Sam also spoke to TV Week where he said that she was "the best partner".

"Honestly, I couldn't have asked for anybody better," he said of the Beauty. "She was the best partner. I love her so much.

"I'm just very happy that we got spend time together because she really made me shine and I felt like I made her do the exact same thing. We just had so much fun together on the whole experience."

Emily says Beauty and the Geek helped her heal after being assaulted.

Emily had a tough experience before entering Beauty and the Geek, telling 9Entertainment she was a victim of sexual assault just months before the show began filming.

"When everything had happened, I was broken," she said. "Two of my friends had to pick me up off the floor."

She says the show helped her to heal, adding that she made lifelong pals with her partner Jason and the rest of the Beauties from the show.

"I feel like coming on to the show, it was like God sending me something to pick me back up off the floor and help me heal, and it honestly did," she explained. "It made me see my worth, it made me enjoy life again. It healed me more than anything else could."

Emily revealed she told the other Beauties about her experience within the first week.

"Coming onto the show... the first week that I met the [Beauties] it was crazy how quickly I got along with them," she said. "I told them about what happened maybe day two of meeting them, and it was really nice having that support throughout the entire show. Also, meeting the Geeks, I saw how boys should treat me rather than how I've been treated so terribly before.

"It's honestly just put all those pieces back together, as I walked in broken from what happened."

Emily also added that her fellow contestant, Jason, had been an "amazing" support.

"Jason was amazing. Off-screen, I did tell Jason the things that had happened to me and he was amazing. He was so supportive," she said. "He knew I had a lot of insecurities, and every time I saw him he would give me some sort of compliment and make sure I was feeling okay.

"He was a massive turning point in everything."

Reply
Upvote
My favourite Geek was Nate, the 1st guy to be eliminated... then he came back for the finals with all of his beautiful hair chopped off! He looked far more handsome with his lovely curls, that was a poor decision, even the make-over dude has long hair! Also what is with the short trousers he dressed all the Geeks in? Some of the guys looked even shorter, with that style of trousers.
Resources
Very Peri
Skin
News
General
Opinion
True Crime
Politics
Sport
Explainer
Entertainment
Celebrity
Reality TV
Movies
TV
Books
Rogue
Royal
Lifestyle
Beauty
Fashion
Weddings
Home
Wellness
Health
Fitness
Travel
Food
Family
Before The Bump
Pregnancy
Baby
Kids
Teens
School
Parent Opinion
Work & Money
Money
Finance
Career
Lady Startup