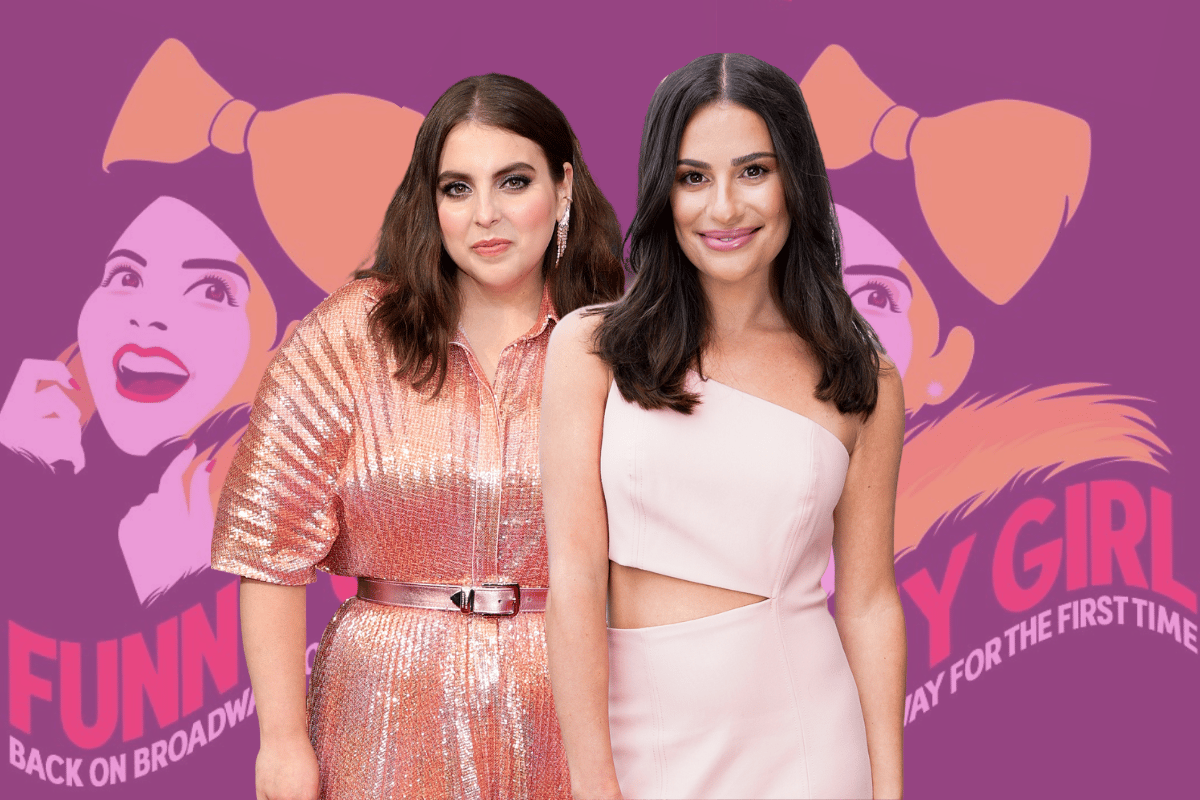 The musical theatre world, entertainment industry and Glee aficionados are all huddled together talking about one major news story this week – and it has everything to do with Beanie Feldstein, Lea Michele and the revival of Funny Girl.

Funny Girl is one of the most iconic musicals of all time, first opening on Broadway in 1964 and starring Barbra Streisand. The semi-biographical plot is based on the life and career of Broadway star, film actress and comedian Fanny Brice, with hit songs throughout, including most notably 'Don't Rain On My Parade'.

It was the musical that catapulted Streisand to fame, and she also played Fanny Brice in the 1968 film adaption, for which she won the Academy Award for Best Actress.

It's been considered the role of a lifetime for many triple threats.

So in 2021, when it was announced a revival of the musical was in the works, you can imagine the sheer excitement from not only musical theatre fans, but actors too.

Lea Michele's name was immediately brought up, given the American actor/singer has been incredibly vocal about her idolisation of Streisand and the role of Fanny Brice.

But with a few too many skeletons in her closet arguably shutting down that opportunity, the role instead went to Beanie Feldstein. So this week when it was announced Feldstein was leaving the show, only to be replaced by Michele, everybody started to talk.

Here's everything we know about the story.

Video via Funny Girl on Broadway.

In Glee, Michele starred as Rachel Berry – a dorky, arrogant yet incredibly talented student with dreams of making it to Broadway. There appears to be little difference between Michele herself and the character she played.

By season one of Glee, Michele had already belted out the biggest show tune from the musical, 'Don't Rain on My Parade', and from that point on her character too dreamt of starring in Funny Girl.

And to really drive home the point, on the show Rachel Berry ends up taking on the role of Fanny in a fictional Funny Girl revival.

How very meta. Michele herself has previously performed on Broadway, in Spring Awakening.

And in 2015, Glee creator Ryan Murphy obtained the rights to revive Funny Girl on Broadway. Murphy and Michele are considered very close, so the likelihood of Murphy choosing Michele for the role would be unsurprising. But soon after that announcement, Murphy lost the rights.

But there was one thing in particular stopping Michele from landing the real-life revival gig. And it had everything to do with her alleged behaviour in the workplace. 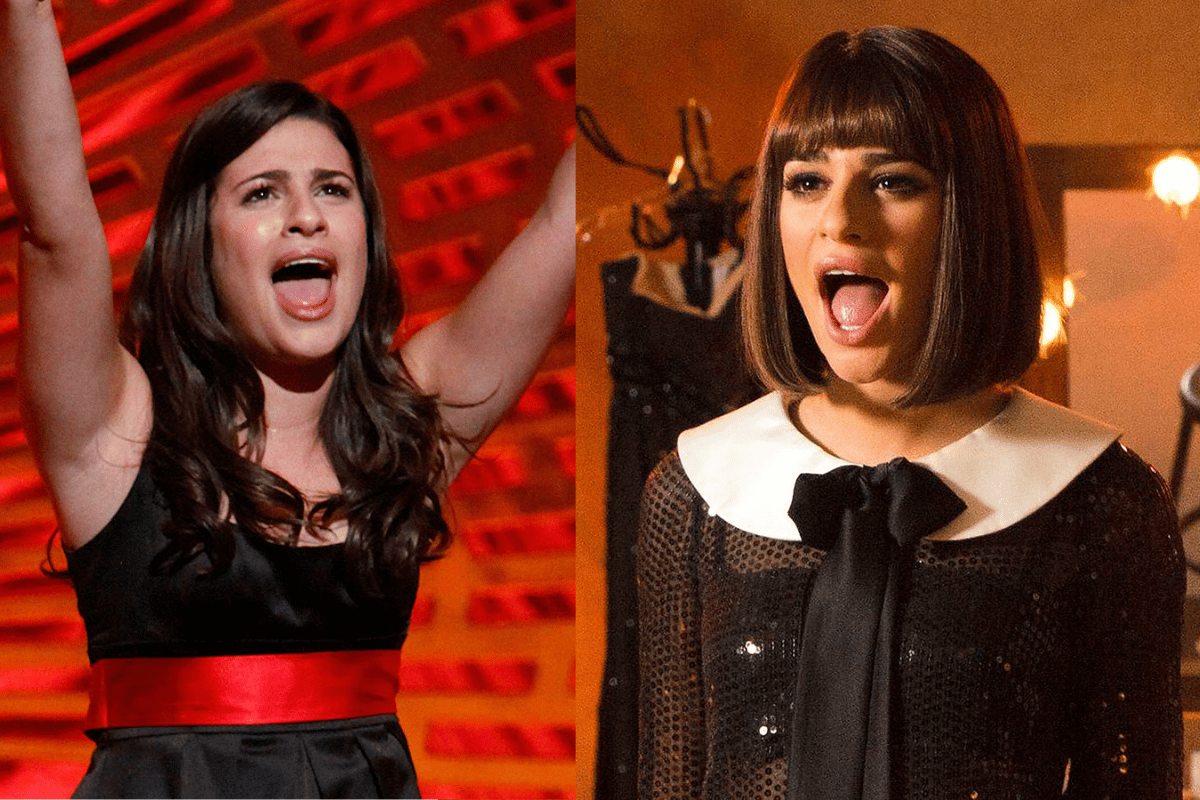 Soon after, Michele's former Glee co-star Samantha Ware – a woman of colour – came out with serious accusations against Michele. And it resulted in Michele's 'quasi-cancellation'.

"Remember when you made my first television gig a living hell?!?! Cause I'll never forget. I believe you told everyone that, if you had the opportunity, you would 's**t in my wig!' amongst other traumatic microaggressions that made me question a career in Hollywood."

Original Glee cast member Heather Morris then sent out a tweet: "Let me be very clear, hate is a disease in America that we are trying to cure, so I would never wish for hate to be spread on anyone else. With that said, was she unpleasant to work with? Very much so; for Lea to treat others with the disrespect that she did for as long as she did, I believe she SHOULD be called out."

And the allegations of racism, bullying and meanness continued to snowball, forcing Michele to issue a public apology.

When Beanie Feldstein – an actor and the sister of Jonah Hill – was announced as the lead in the 2022 Funny Girl revival, the response was widely positive.

As a queer, Jewish, plus-size woman, Feldstein's casting represented "the reinvigoration of a historically Jewish character by a proudly Jewish actress," as well as diversity and inclusion as a whole.

But once the show began in April, the reviews weren't fantastic – not completely terrible, but not kind either.

A post shared by Funny Girl on Broadway (@funnygirlbwy)

Feldstein can sing well, but some reviewers questioned whether her singing prowess was up to the standard that the role and Streisand's legacy required.

But many of the reviews arguably went too far.

"To rip the bandage off quickly, Feldstein is not stupendous. Still, you can't blame Feldstein for the show's problems; that would be like blaming the clown for the elephants," one New York Times critic wrote.

"Feldstein, for all her fourth-wall winks and bright enthusiasm, is fundamentally miscast. This girl needs a force majeure, not a light breeze, to make it sing," wrote another.

So in June, Funny Girl announced that Feldstein would be leaving the show on September 25. They did not provide a concrete reason for her departure, but many have assumed it was due to the ratings and reviews.

And of course to highlight just how incestuous the entertainment industry is, Feldstein's co-star Jane Lynch also announced she was leaving the production. Lynch previously starred alongside Michele in Glee as coach Sue Sylvester. By all accounts, Lynch's Funny Girl performance reviews had been stellar.

A few weeks later, Feldstein released a statement to say she would leave the show even earlier, now on July 31. From her statement, many have assumed she was essentially ousted.

"Playing Fanny Brice has been a lifelong dream of mine, and doing so for the last few months has been a great joy and true honour. Once the production decided to take the show in a different direction, I made the extremely difficult decision to step away sooner than anticipated."

Hours later, Michele – who is also of Jewish heritage – announced she would be the show's new replacement, starting from September, with an understudy filling in for the months in between.

Michele is undoubtedly qualified for the role – given she has already performed on Broadway and can sing phenomenally. Instead, the role recasting poses an ethical dilemma.

And it circles back to why Michele didn't originally get the role – because of her alleged behaviour. It wasn't simply 'diva antics'. The accusations were far more serious. When Michele publicly apologised, she said she "didn't remember" the things she allegedly said or did, and suggested she had simply been "perceived as insensitive and inappropriate at times".

Interestingly, when Feldstein was originally cast as Fanny Brice, Michele publicly congratulated her via Instagram, saying: "Yes! YOU are the greatest star! This is going to be epic!!!"

When Feldstein was on Andy Cohen's show around that time, she said of the hype surrounding Michele and Funny Girl: "I didn't know that any of this was happening, by the way. All of a sudden people started explaining it to me and I was like, 'What?' Like… 'I didn't understand'. She very sweetly wrote on my Instagram [but] I don't know the woman whatsoever."

Listen to The Spill unpack this story. Post continues after audio.

While many fans are likely excited to see Michele perform and sing as well as she does, others have pointed out that the recasting leaves a sour taste in the mouth. It's also interesting that Jane Lynch has left the production and won't be working with her former co-star.

Ware also retweeted the following: "This industry will reward bad behaviour time and time again. It's good to know that you all can only identify abusers when it's a cis-yt [white] female getting abused. This industry cares not about Black people and our experiences within it. Very sad."

There has also been disappointment over the fact Feldstein represented something fresh and more diverse, and that is being taken away.

As Mamamia's entertainment editor Laura Brodnik noted on The Spill: "There's very few plus size women in the entertainment industry and on Broadway, and Beanie was one of the few, and also one of the very few queer women who gets to perform in that space. And the fact she has been ousted for someone who is known to be very toxic, who bullies minorities, and whose problematic behaviour has not been addressed in any way – it doesn't feel right."