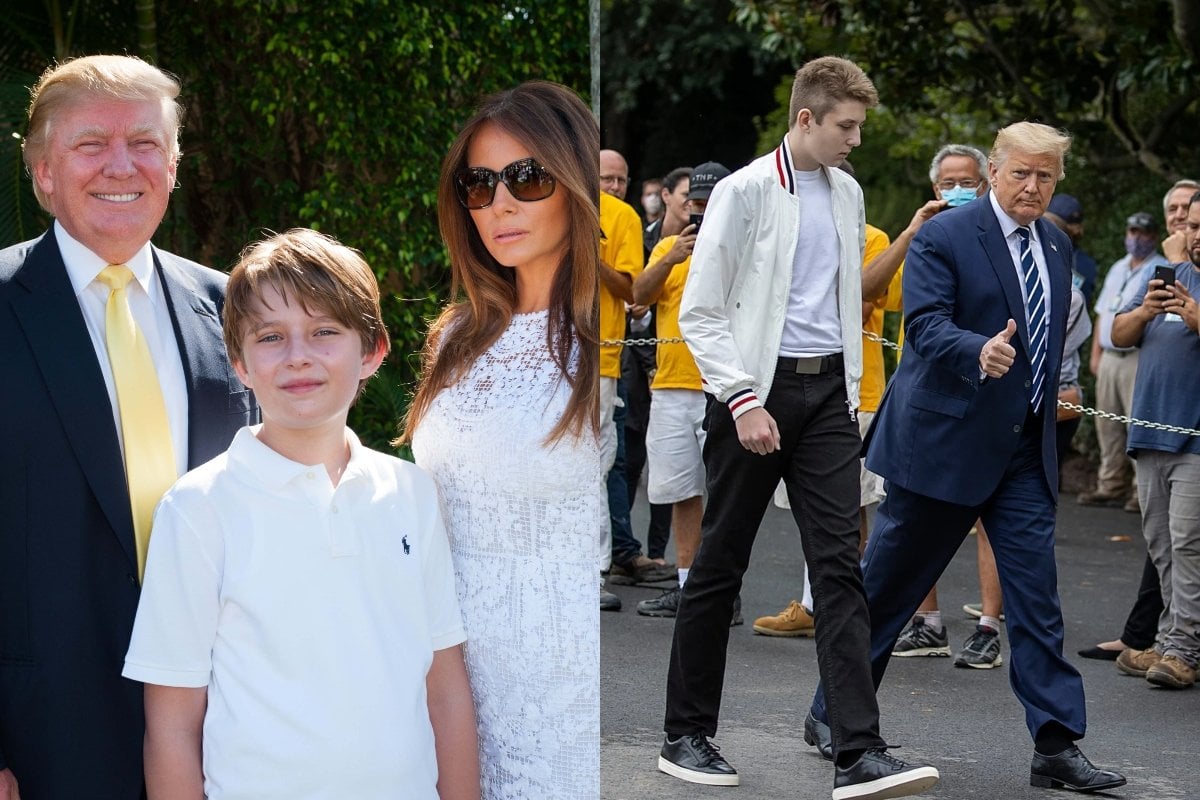 This week, Melania Trump announced her 14-year-old son with US President Donald Trump, Barron Trump, tested positive for coronavirus, but had no symptoms.

The White House initially said he had tested negative, after both his parents were confirmed as COVID-19 positive earlier in October, but on Wednesday the First Lady said subsequent testing showed Barron had the virus.

"It was two weeks ago when I received the diagnosis that so many Americans across our country and the world had already received—I tested positive for COVID-19. To make matters worse, my husband, and our nation’s Commander-in-Chief, received the same news," she said in a statement.

"Naturally my mind went immediately to our son. To our great relief he tested negative, but again, as so many parents have thought over the past several months, I couldn't help but think 'what about tomorrow or the next day?'. My fear came true when he was tested again and it came up positive. Luckily he is a strong teenager and exhibited no symptoms."

Asked about his son at the White House on Wednesday, Trump said "Barron's fine", before pivoting to talk about Amy Coney Barrett, his nominee for the Supreme Court.

Trump spent exactly one second answering a question about how his son Barron is doing after he tested positive for coronavirus pic.twitter.com/aiGXBSbHRZ

The youngest Trump child has since recovered from the virus, along with both his parents.

Barron was born on March 20, 2006 and found himself in the spotlight immediately thanks to his father's reality TV show and fame.

He made several television appearances including on The Apprentice and in an episode of The Oprah Winfrey Show when he was only two months old. 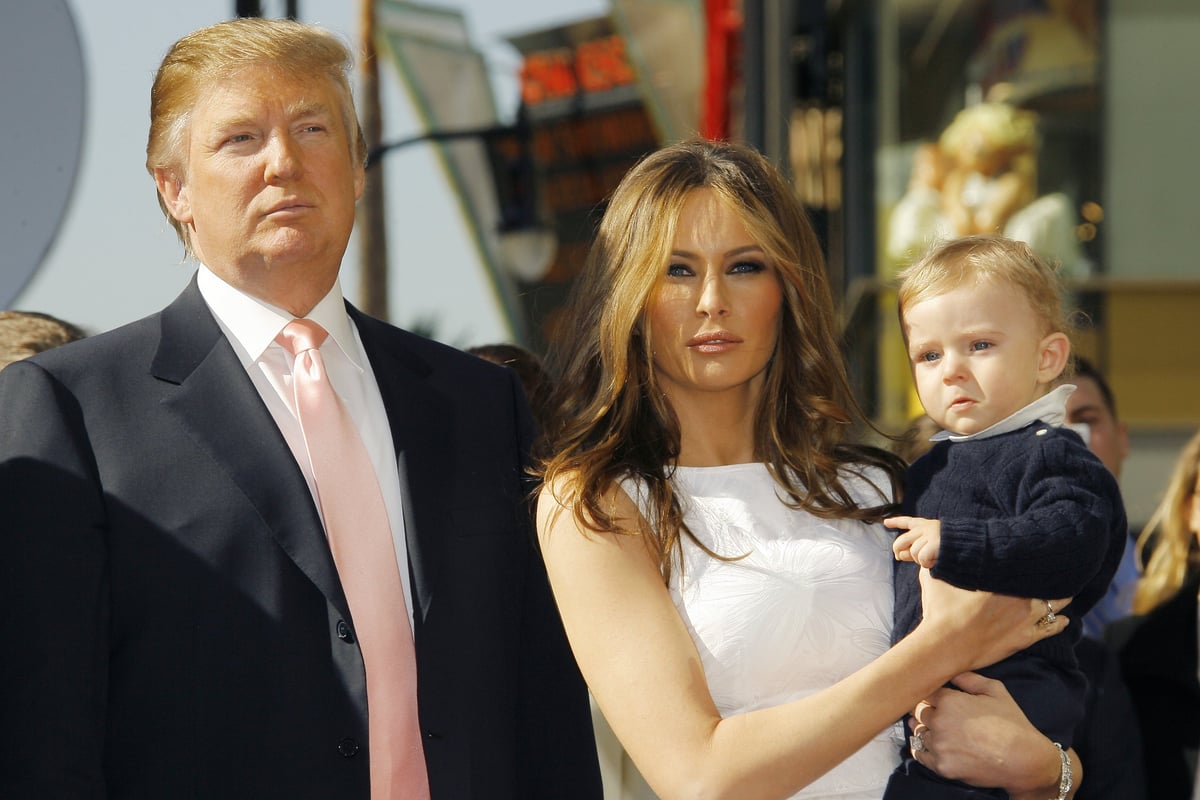 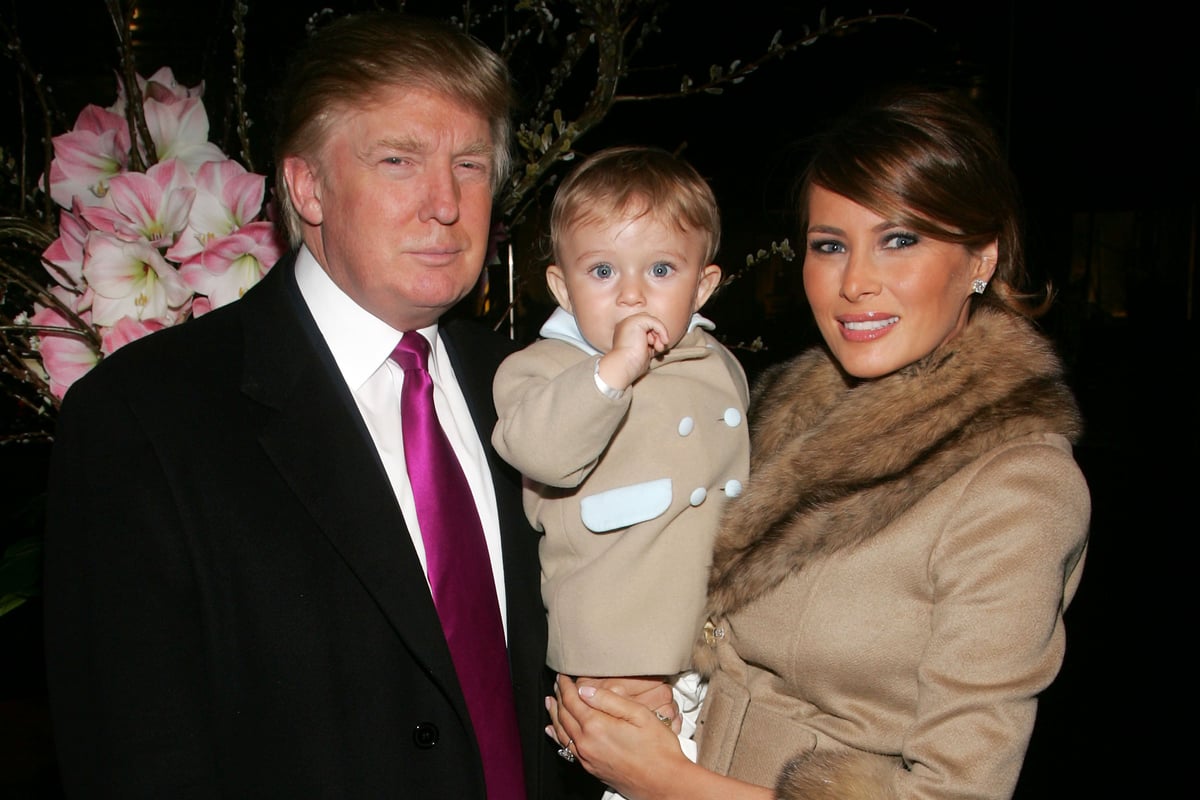 Barron himself has never spoken publicly, but his half-siblings have described growing up with Trump as a father.

He certainly wasn't a hands-on father, but all his children's accounts.

"My father is a very hardworking guy, and that’s his focus in life, so I got a lot of the paternal attention that a boy wants and needs from my grandfather," Donald Jr told New York Magazine.

But Ivanka told CNN in 2016 Trump always prioritised them.

"I was probably 10 years old and I'd call collect to the Trump Organisation," Ivanka recalled of calling her dad during her days at school.

He would put her on speakerphone with whoever was in his office.

"It was colleagues, it was titans of industry, it was heads of countries. He'd always tell everyone in the room how great a daughter I was and say cute things and ask me about a test I took," she said.

"He always made us his top priority. It doesn't mean he was home every night for dinner - he wasn't. He was working very hard. He was building an enormous business and he was in the early days of doing that when I was young and had a lot to prove to himself and to others, and he had big ambitions for himself.

"So, you know, he wasn't always physically present but he was always available."

When his dad became president after the 2016 election, Barron did not immediately move into the White House. Instead, he remained at Trump Tower in New York City with Melania until the end of the 2016-2017 school year.

He now lives in the White House and goes to school in nearby Maryland.

Growing up in Trump Tower.

Barron is the first boy to live in the White House since JFK Jr lived there during his father's 1961-63 presidency.

Other presidents have had sons, but they've all been adults who lived outside of the White House. The three most recent presidents - Obama, Bush and Clinton - all had only girls.

The first family’s White House living quarters consist of 16 rooms, one main corridor, six bathrooms, and one lavatory, according to the White House Museum website. That sounds immense, but for Barron, the move to Washington DC might have actually been a downgrade. 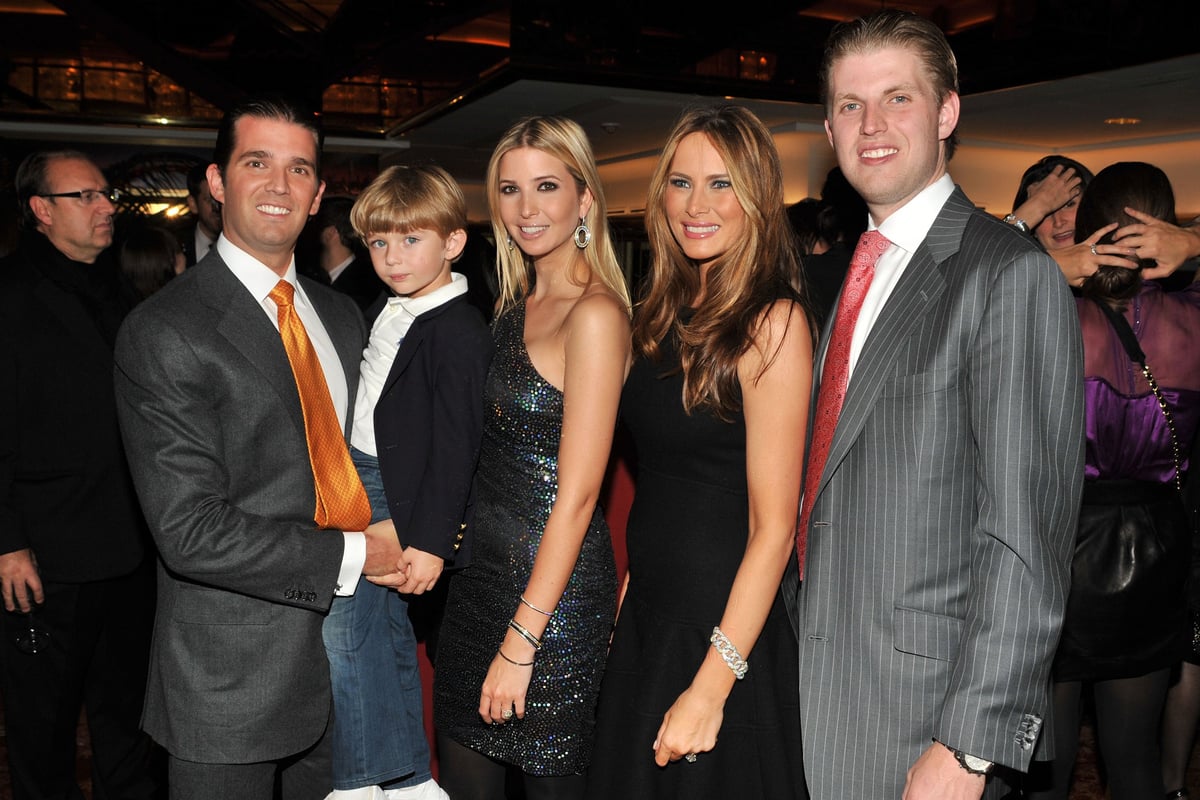 In Trump Tower, Barron had a whole floor to himself.

While speaking with Parenting shortly after his birth, Melania Trump said her son's floor had a fully functional living room, kitchen, maid's quarters and more.

Melania also told the publication she gave Barron the nickname "little Donald" based on his personality.

"He is a very strong-minded, very special, smart boy. He is independent and opinionated and knows exactly what he wants. Sometimes I call him 'Little Donald.'" 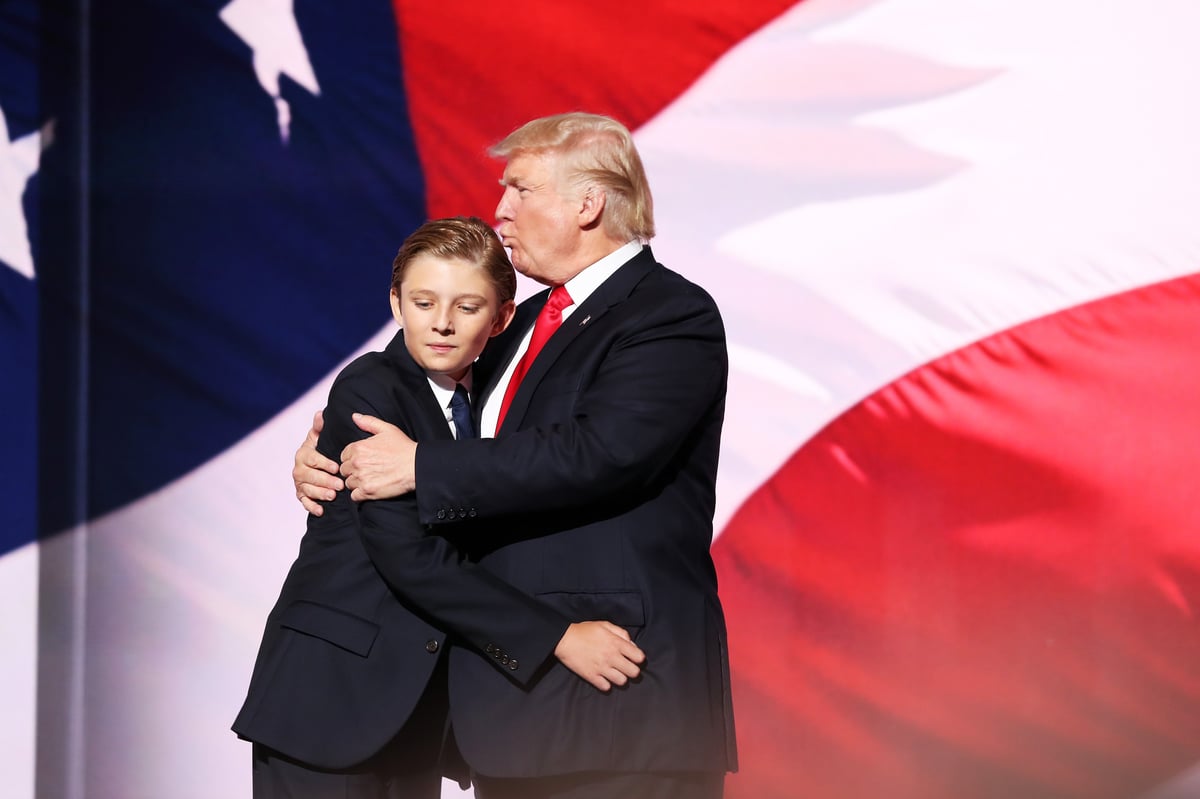 As People reports, Donald Trump responded to questions about whether Barron was excited about living in the White House by saying, "not so much".

"He does love New York and he loves his school. Not so much living in the White House."

Barron was 10 when his father became president and in the four years since, he's rarely been seen in public - only usually seen with his parents at events or during travel. 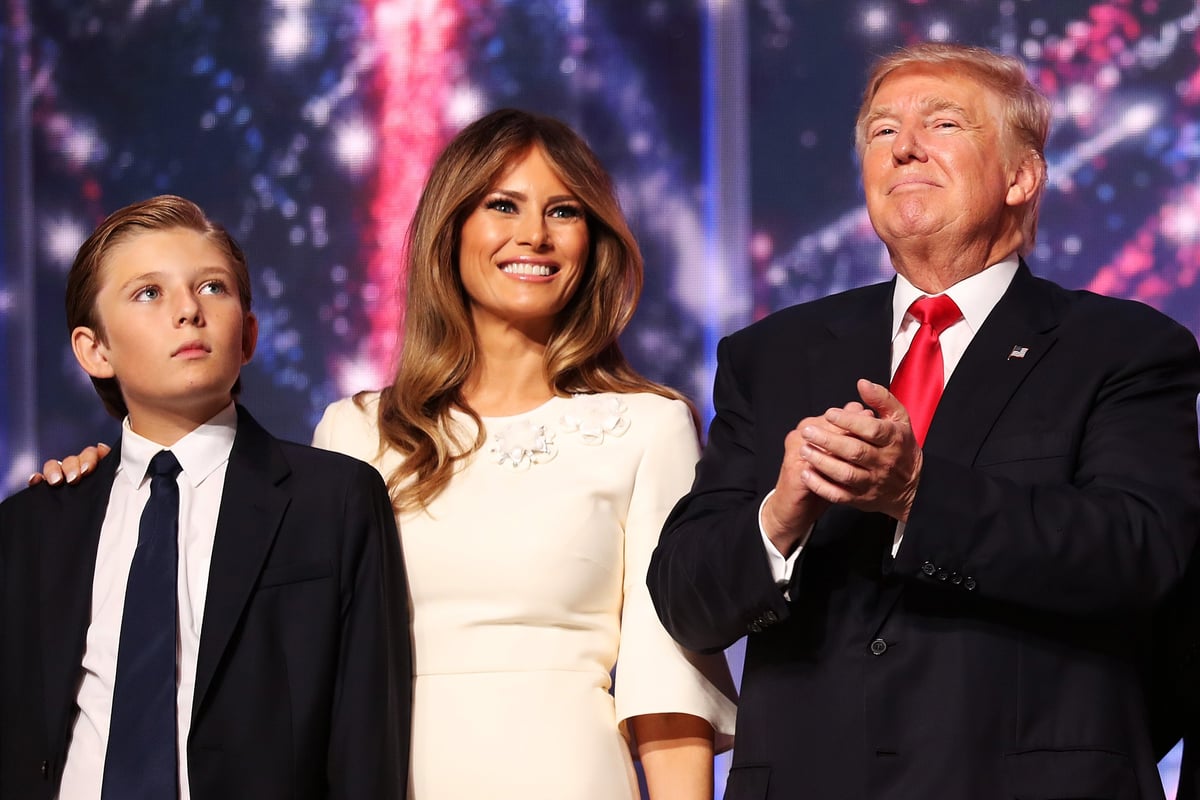 In 2016, Melania said she wanted to keep Barron's life private.

"I keep him balanced and - just have him a childhood as normal as possible. And he's enjoying his school and his sports. He's a great athlete. And I just want to have him - out of the spotlight for now."

Speaking with Fox News' Sean Hannity two years later, Melania said that even though Barron isn't living "a normal life" he was "enjoying" life in DC. She also said her efforts to "protect" him from public scrutiny are required to "give him the childhood he deserves."

In November 2018, the First Lady spoke at a forum at Liberty University as part of her "Be Best" initiative, and she shared rare details about her son's life in the White House.

Melania said Barron is not on social media and that he is "all into sports", but Trump would have "a hard time" letting his son play American football because of concussion and injury issues.

Instead, he plays soccer for Arlington Soccer Association and golf with his father.

In April, Trump said Barron was not enjoying being homebound and unable to be playing sports due to the COVID-19 pandemic.

Barron's height has been a major point of interest during his father's term because, if you haven't noticed, he's really tall.

At 14 years old, he is well and truly taller than Trump, who is six foot two (allegedly, although there is speculation he has... inflated that figure). 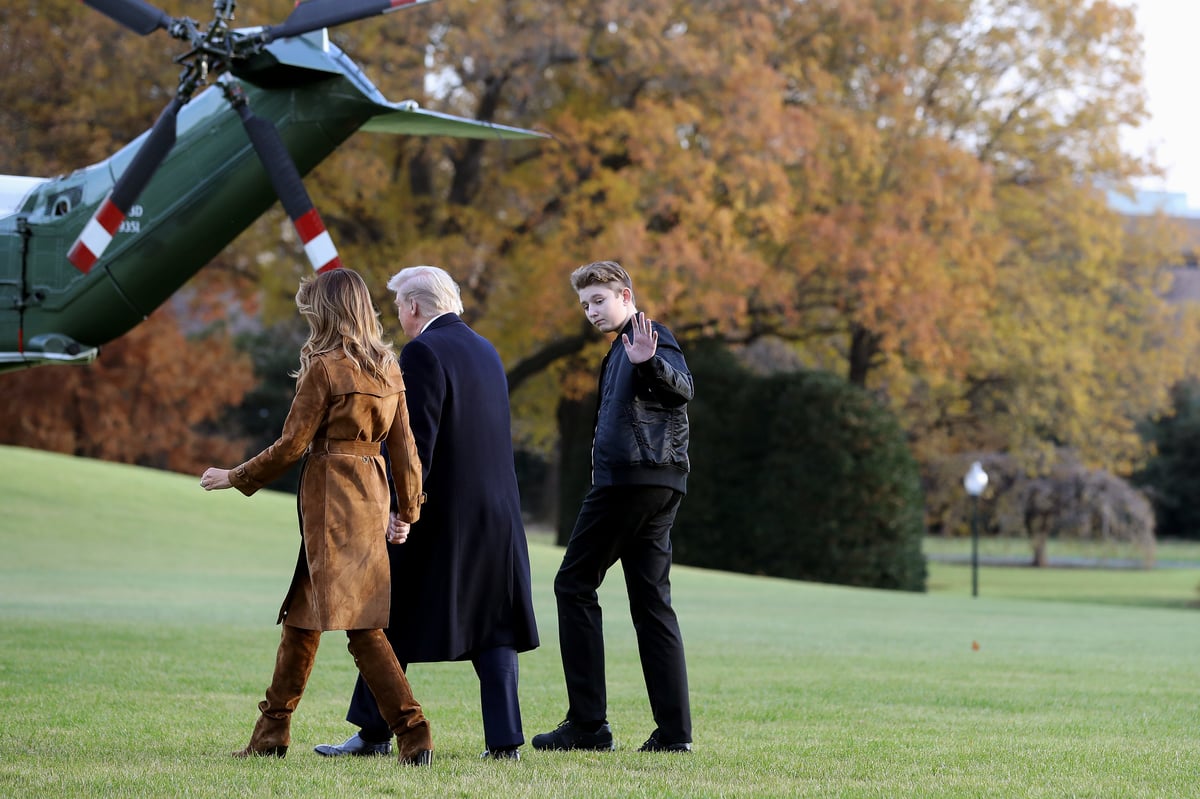 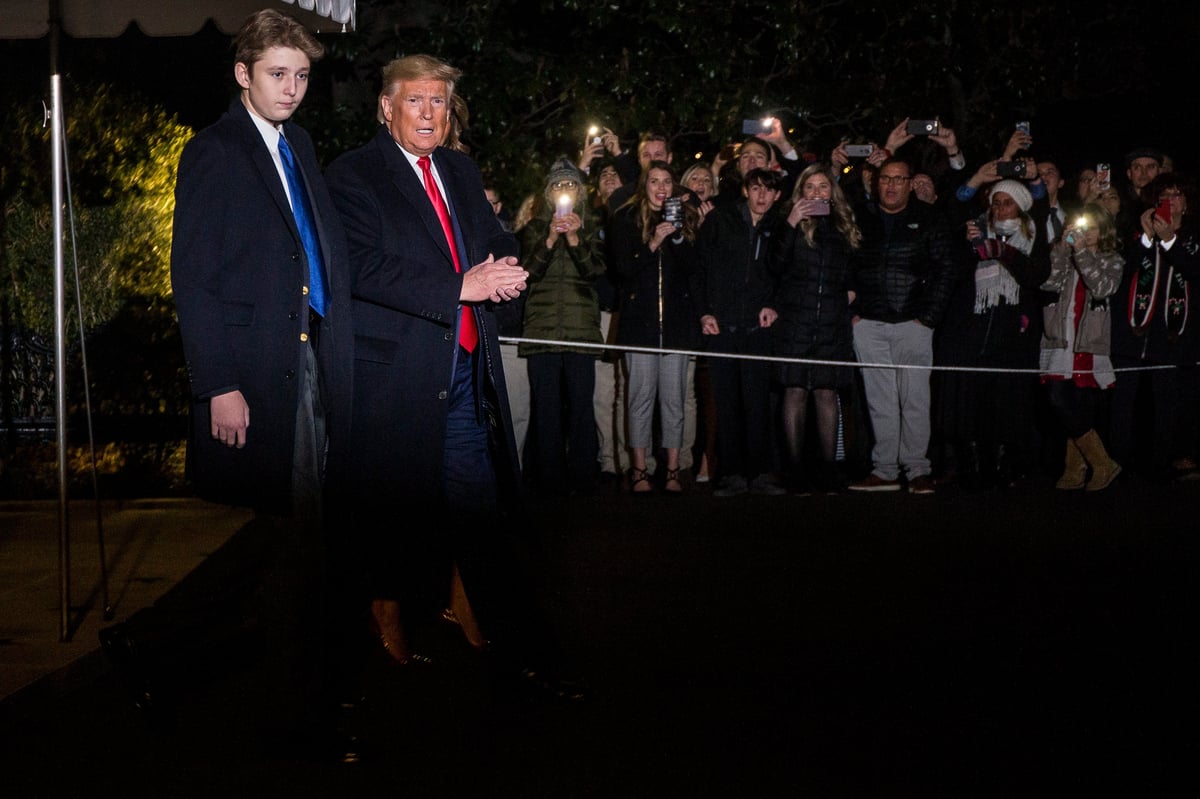 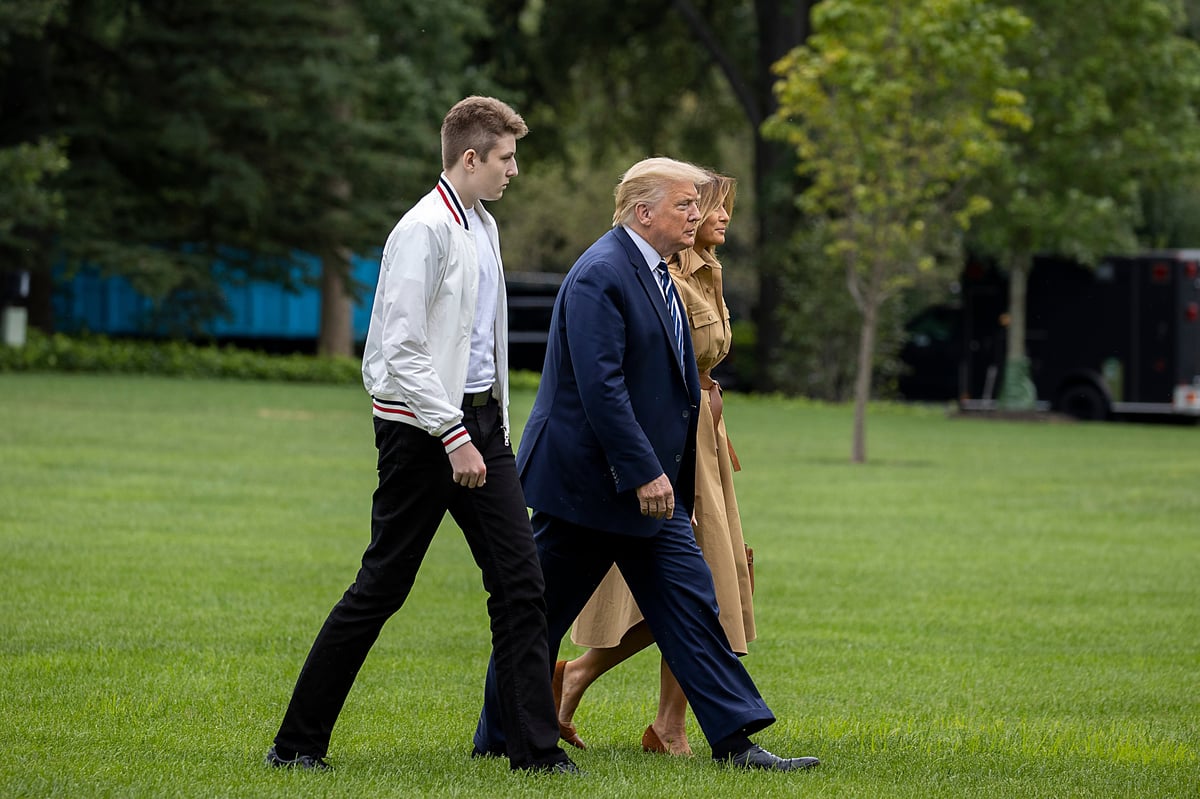 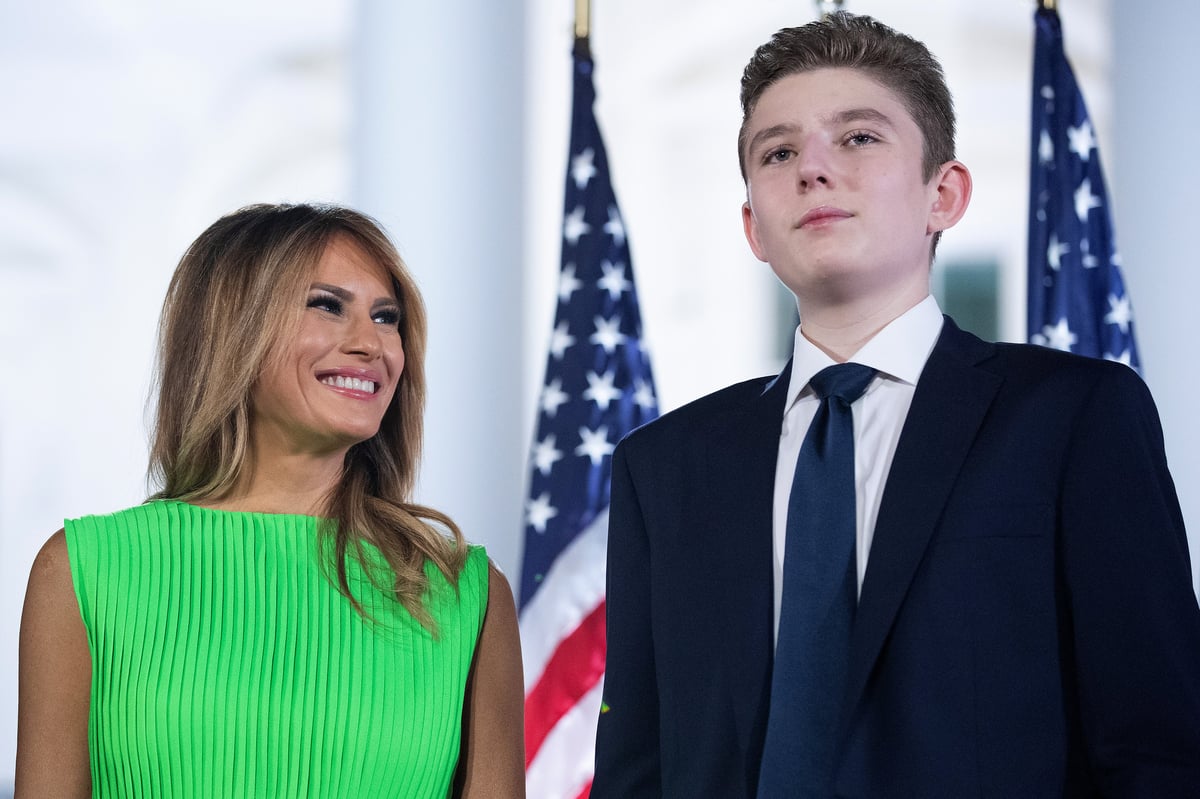 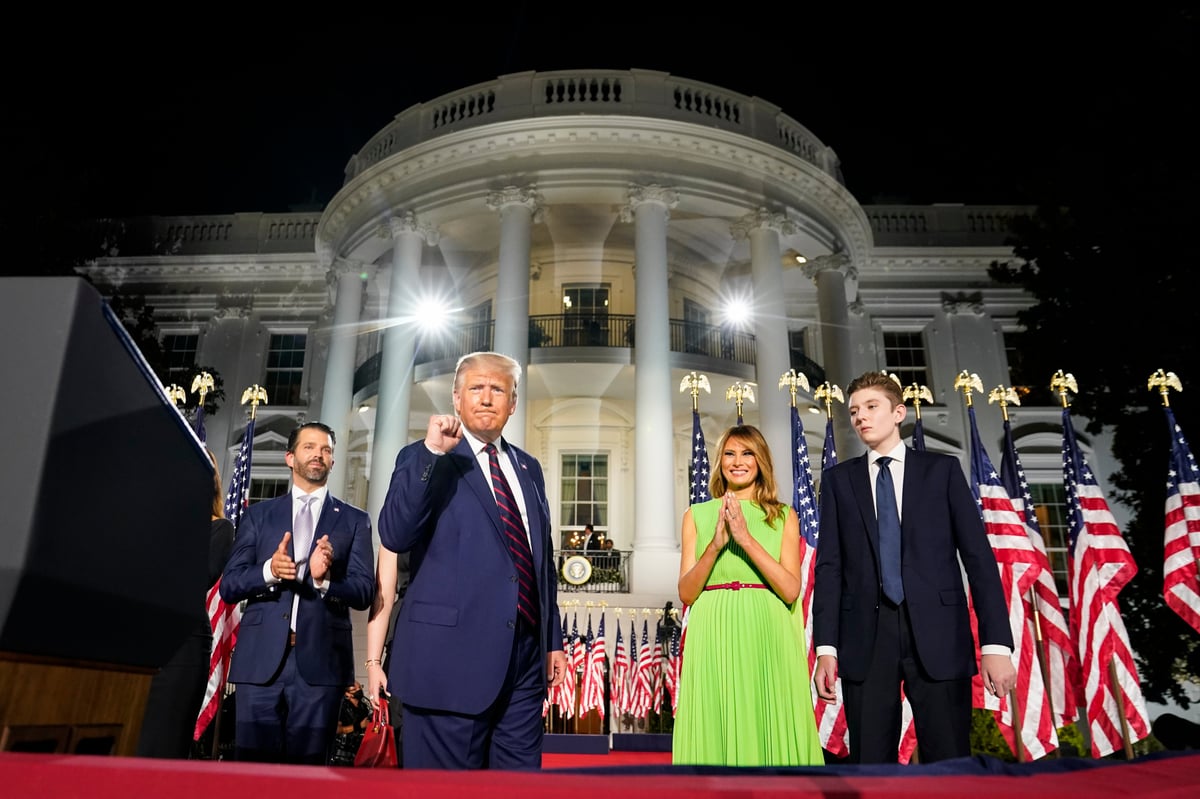 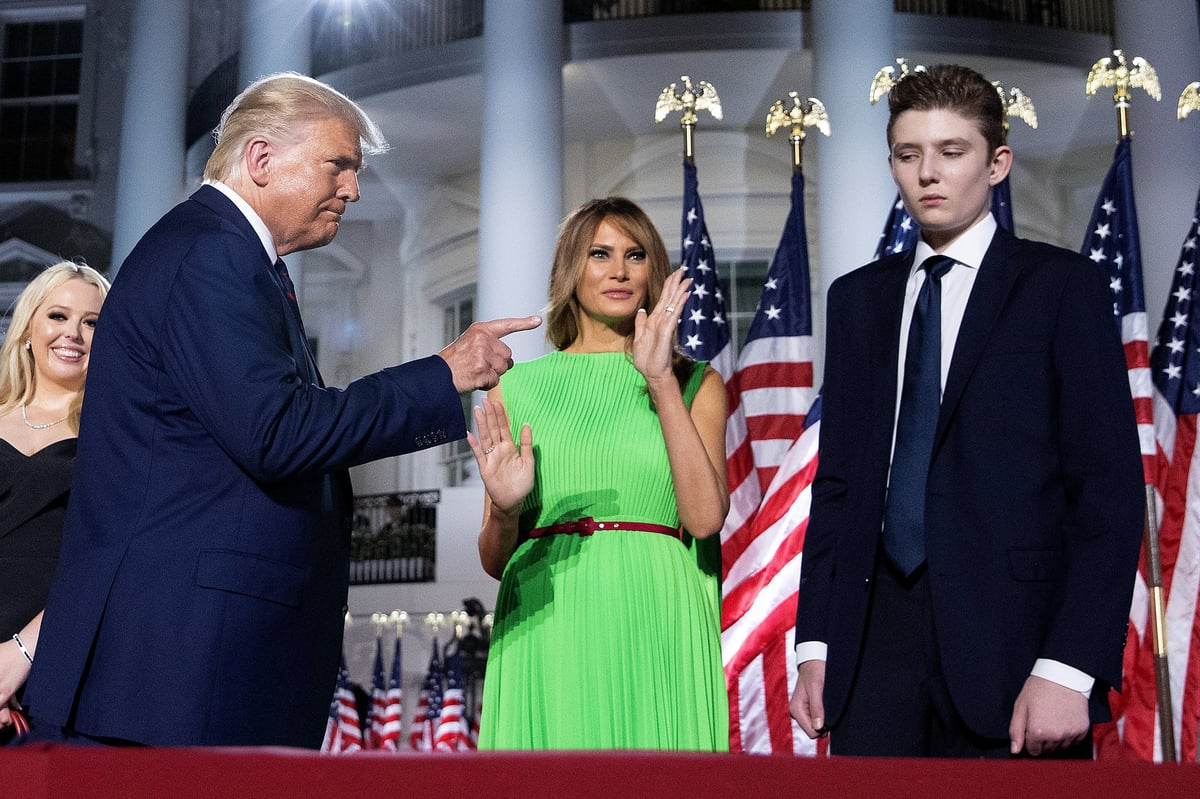 In May 2020, Trump spoke to a man towering at two metres tall (six foot eight inches) about Barron's height.

"I have a son that looks like he’s going to be right around that number: Barron."