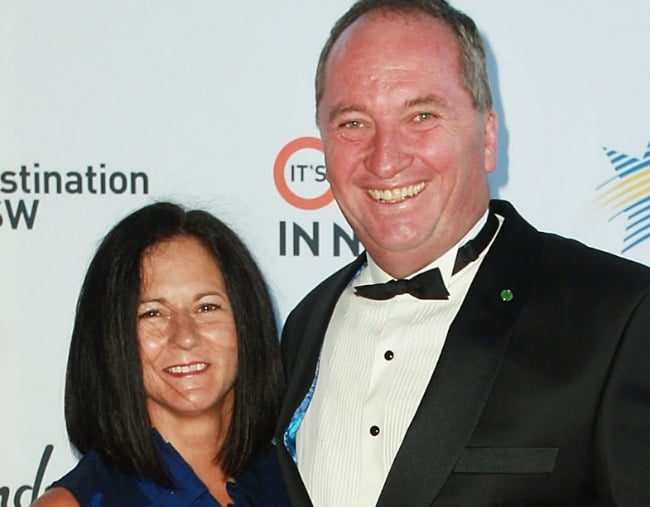 In December of last year, 50-year-old Barnaby confirmed rumours he had split from his wife of 24 years, Natalie Joyce. They have four daughters.

Natalie Joyce has now responded to the news, sharing her “devastation” that her estranged husband has been “having an affair… with a former staff member.” She believes it began when 33-year-old Campion was a paid employee, and has been going on for a number of months.

“This situation is devastating on many fronts,” she said, in a statement published by The Australian. “For my girls who are affected by the family breakdown and for me as a wife of 24 years, who placed my own career on hold to support Barnaby through his political life.”

Natalie remarked that their family life had very much been shared during her husband’s career in politics and throughout their marriage, campaign and office staff were often invited into their home.

“We also feel deceived and hurt by the actions of Barnaby and the staff member involved,” she told The Australian.

“The situation for myself and the girls will be made worse by the fact that this will all be played out in public so at this time, I would ask that the girls and I are given some privacy and time to come to terms with the consequences and take steps to plan our future.”

In an interview with The Weekend Australian Magazine, in March last year, Natalie offered some insight into their home life, telling how little time the Nationals leader spent at home with his wife and children.

Over a period of two months, he spent only two nights in his own bed, and Natalie said she believed the family had taken a “back seat” to his career.

“Every time he’d come home [their youngest daughter, Odette] actually wouldn’t go near him because he hadn’t been home.

“It’s taken a long time to get that father-daughter rapport.”

Barnaby Joyce is yet to provide a statement regarding his relationship with his former staffer, Campion. Their baby is, according to The Daily Telegraph, due in April.

I think most people knew. I read a variety of news outlets, and this was all over social media and certain media during the byelection. I'm surprised there are still people that didn't know. It was huge news during the campaign. I find some people's shock rather hypocritical. We all know about Abbott and Credlin are people saying that because Abbott didn't get Credlin pregnant that therefore it is ok?

He’s not the first, nor will he be the last. Bill Shorten springs to mind.