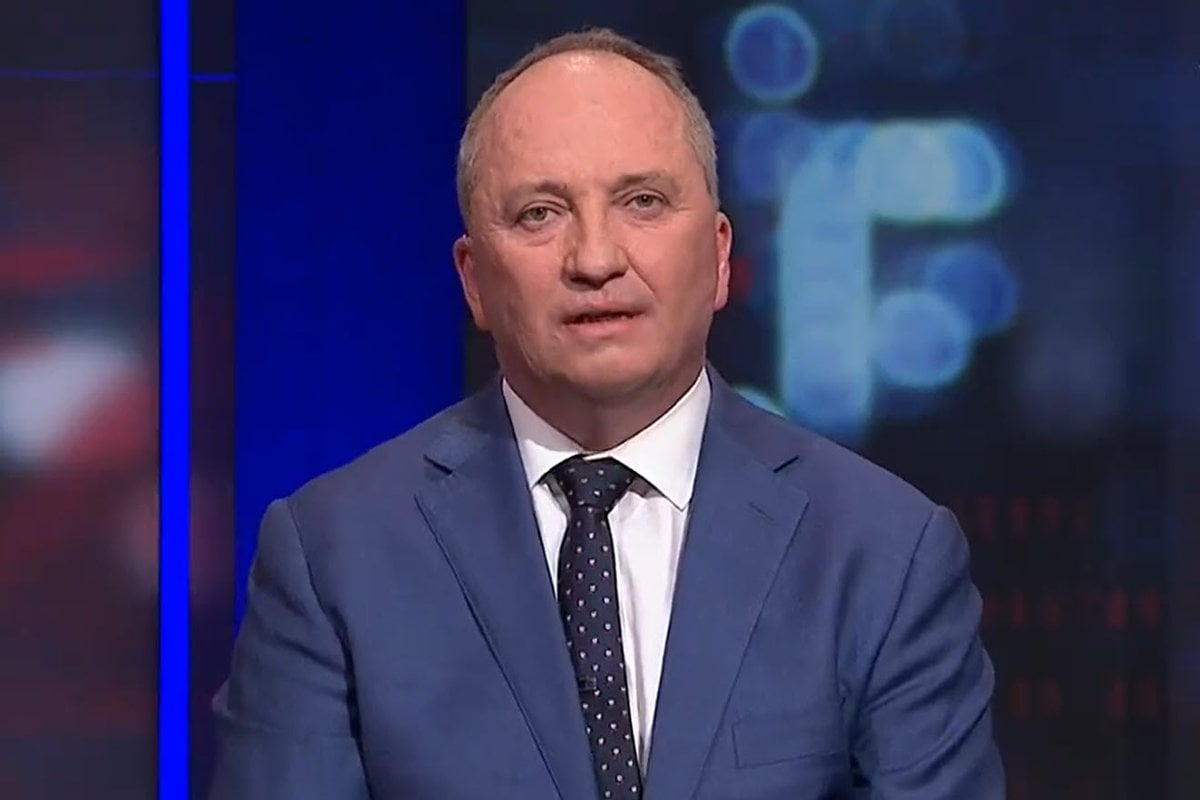 Monday night's Q&A was titled 'Sex, Lies and a Better Politics', tackling the topic of respect for women and equality after last weeks Four Corners investigation into allegations of sexual misconduct and a toxic culture for women in Canberra.

But it was overshadowed by former deputy prime minister Barnaby Joyce.

In conversation with writer Jane Caro and former Labor MP Emma Husar about sexual relationships in Canberra, Joyce, a Nationals MP who had a relationship with his former press secretary Vikki Campion, continually interrupted.

At one point, he cut off his female counterparts 12 times in two minutes.

The episode spoke to issues highlighted in a Four Corners episode, including an affair between Cabinet Minister Alan Tudge and a staffer, alleged inappropriate behaviour and misogyny by Attorney-General Christian Porter and more generally, a toxic work environment for women.

The episode also aired messages from a WhatsApp group featuring senior Liberal women, including current Cabinet ministers. In the group, the women despaired about the sexism of some of their male colleagues.

On the other side of the aisle, former Labor member Husar was forced to resign from her federal western Sydney seat after sexual assault allegations and bullying and harassment claims from staff in 2018.

"I don't have to answer your question."

Caro said Canberra was a "boys' club", and the only way to change this was to ensure more diversity.

She cited former Liberal staffer Rachelle Miller, one of the ABC's main witnesses in the Four Corners investigation, who may lose her new job after speaking publicly about her affair with Tudge and sexism in Canberra. 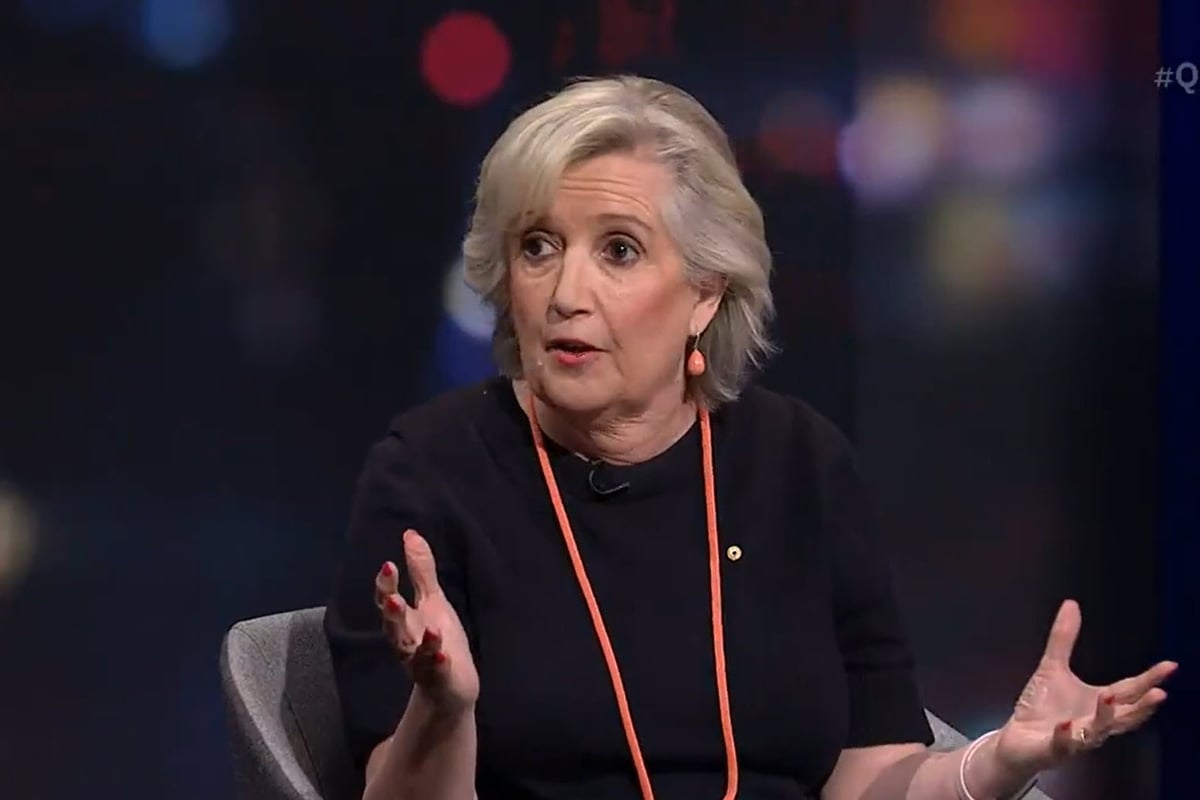 "This is the boys circling the wagon, this is how it works," Caro said.

"This is how women who speak up are silenced. Woman watch it, and they shut up too. That is why it goes on and goes on. The problem is with agency, is if you're a young woman in any corporate or political situation and a man with power puts the hard word on you, I can tell you exactly what goes through your head. You don't want to do it. But if you say, 'I don't want to do it', he's going to stop your pitch for the rest of your working life...

Joyce said he "completely agreed" with Caro about agency, but he said the state should not be telling people how to live.

Barnaby Joyce keeps saying "the state" shouldn't tell men and women who to love and be with. What he forgets is he WAS the state, and opposed marriage equality, doing precisely that: telling people who they could love, which relationships were acceptable, legitimate #qanda

So @Barnaby_Joyce, the guy who opposed same sex marriage & was opposed to the HPV vaccine against cervical cancer on the basis it would make girls promiscuous, is on #QandA saying he supports the freedom of individuals and opposes state intervention in personal lives#ffs #auspol

Responding to that, Caro said within our society most 'bosses' were still mostly men with female subordinates, creating a power imbalance that meant unequal 'freedom' to make decisions about a relationship.

Caro said we've seen time and time again that it is always the woman that pays the price.

"I've heard so often people say, 'She's going to ruin his career'. I'm yet to see many men whose careers have actually been ruined. I have sent a hell of a lot of women who have had to leave the country, who have had to get other jobs, whose whole working life and ambition has been ruined."

Barnaby just interrupted women 12 times in 2 minutes. On an episode about respect for women. 😂 I just counted. You can't make this up. #qanda

Soon after, Caro and Joyce argued about disclosing personal relationships to employees.

"I don't have to answer your question, you're not asking the questions, these people are," Caro responded as Joyce interrupted her repeatedly, gesturing to the audience. 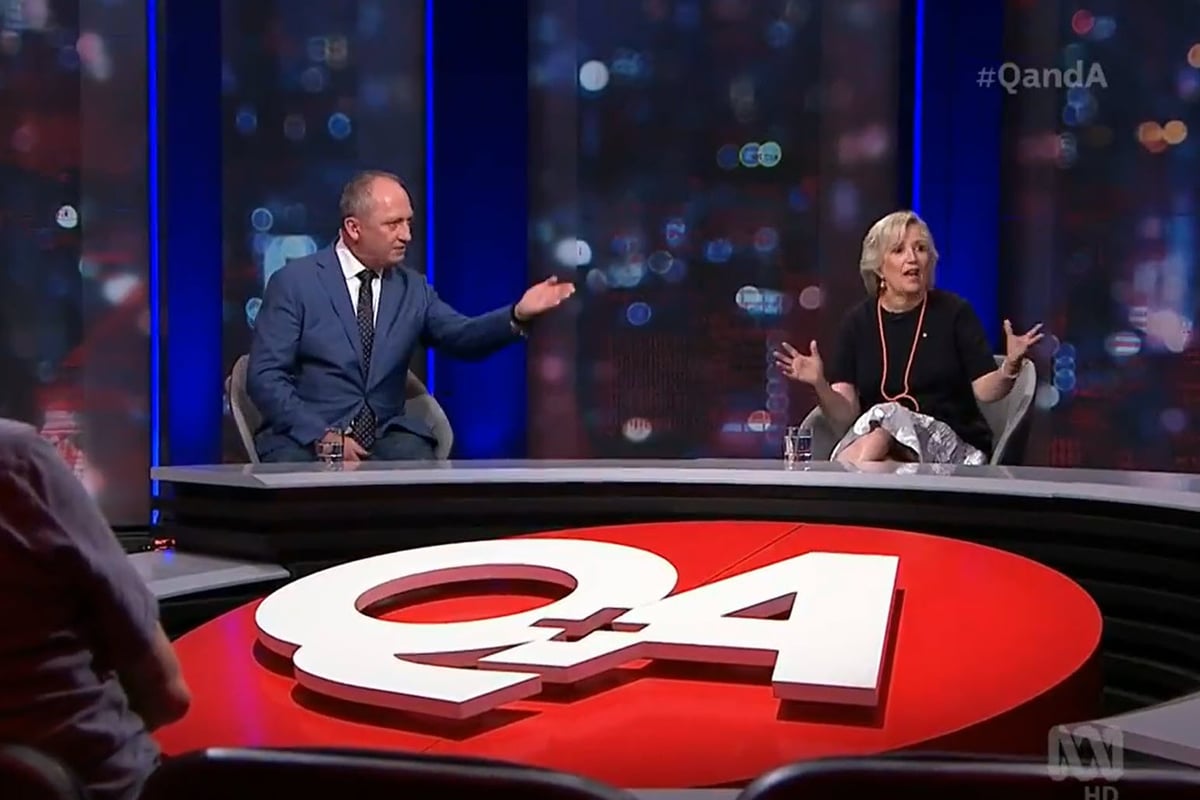 Later in the episode, after repeatedly interrupting and misrepresenting the points of guest Rutger Bregman, who dialled in from the Netherlands, Joyce once again interrupted Caro during her response.

"Barnaby, be quiet!" Husar said at one point.

"It is my turn to talk," Caro added, prompting claps from the audience.

Earlier in the show, former Labor MP Husar said after last week, it was clear women were held to a different standard to men.

How can young women be encouraged to pursue leadership roles? #QandA pic.twitter.com/y3ytvZi3n0

She said such differences made politics a disappointing, unappealing career choice for women - particularly young women looking to enter its ranks.

Husar recalled being called a "sl*t" by media camped outside her house, chasing her with cameras. She said she was threatened and intimidated online and after leaving politics, moved to Western Australia. She has not worked since. 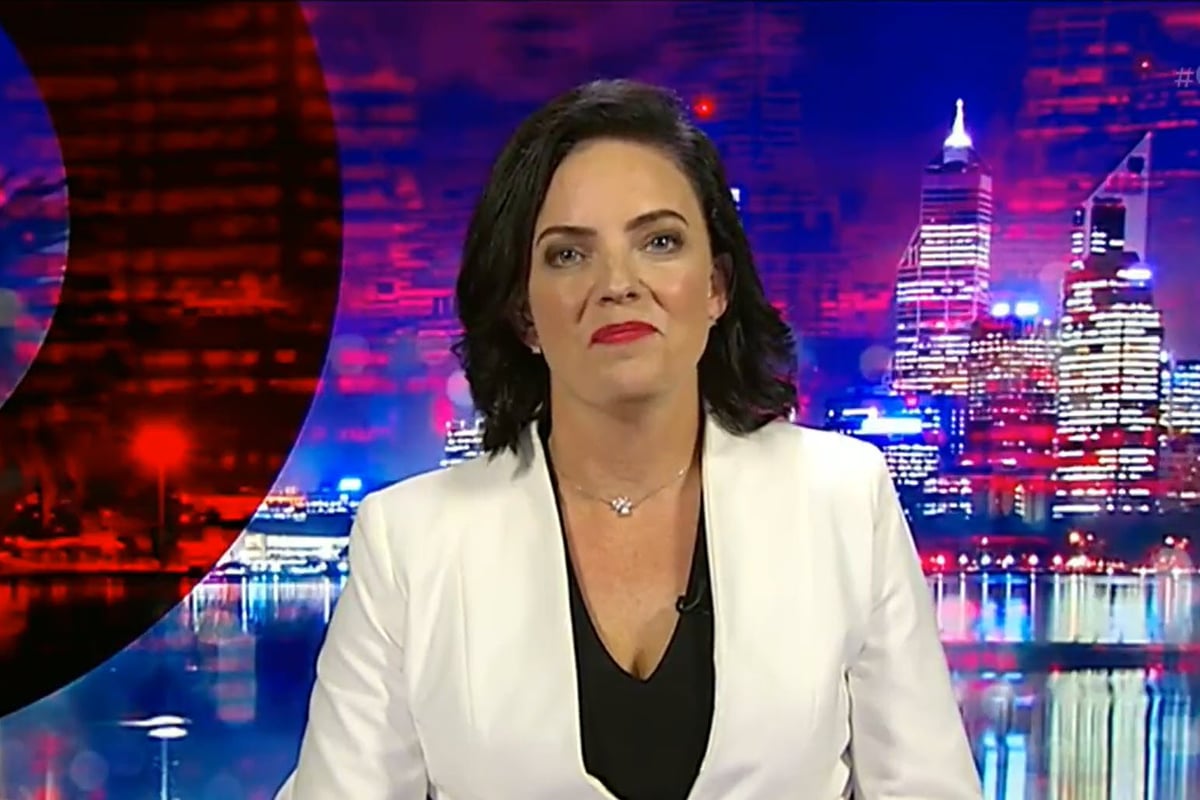 She said if Liberal Party politicians Joyce, Tudge and Porter were "meritorious selection, we've got a problem" and it was "completely galling" to watch these men continue in their jobs, backed by the Prime Minister, in these circumstances.

"In Tudge's case – he got caught with his pants down, Barnaby is the same. The jury is still out on Porter. Mine was all over innuendo. There was a man that was wielding that agenda because I'd fired him," she said. 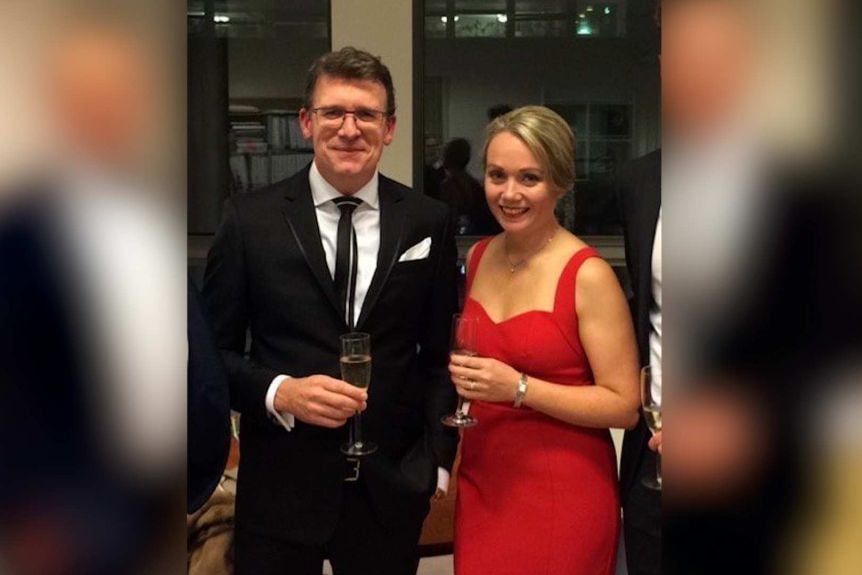 She wasn't wishing that the men would go through the same as she did, which had "immense" impacts on her mental health, but was instead asking "what the hell is this?" at the hypocrisy.

"We can't put a woman out there and hang her out to dry on rumour and innuendo when we have got behaviour that is clearly outside at least some standard of basic integrity going on while we allow this to happen to a woman," she said.

In response, Joyce said he was "disappointed" Husar for "pointing her invective" at him as it was the Labor Party who acted "incredibly poorly" towards her.

"You didn't call that out at the time, Barnaby. I remember your party and the government of the day weaponising what I was going through and making it worse," she responded.

Joyce said he accepted he had acted inappropriately, whereas Husar did not.

"I would say morally wrong, in that my marriage breaking down, but that is not a judgment for another politician," he said.

"I'm not in judgment of you, Emma. I do find it a little bit galling that you open your sort of narration with one of the 'meritorious selection' of myself because I most certainly never, ever did that to you."

"A question of integrity."

Speaking about how he and Campion were "flushed down the toilet", Husar opened her mouth to speak but Joyce told her to wait. She did. 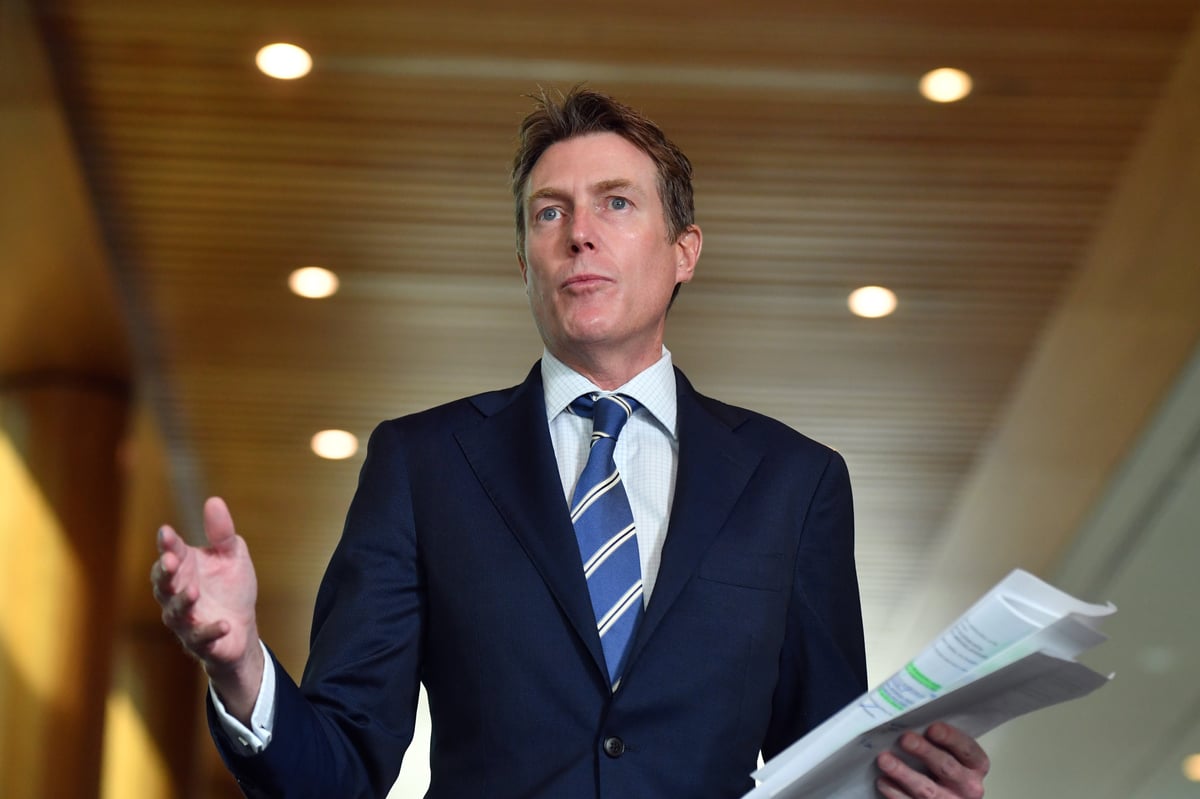 It resulted in a fiery exchange.

Husar: "You didn't deserve to be treated in any other way. This comes down to a question of integrity."

Husar: "We're talking about something entirely different, Barnaby. In your case, it goes to the question of integrity. You went to your electorate with [former wife] Natalie and the girls on your corflutes [campaign signs]."

Husar: "You campaigned on family values."

Joyce: "You're wrong there. In the last election - Natalie and the girls, who I love dearly, were not with me. You're wrong on that one. I'm quite disappointed, Emma. That you would say that I deserved to be. I'm out here..."

Husar: "Okay. You're allowed to be disappointed. I'm disappointed in your behaviour. And it goes to a point of integrity, Barnaby. It is different. So, you and Alan and Christian Porter - there are people, there are witnesses who have come forward. And they are investigated. There is absolutely no question of doubt that you have acted with - you know, maybe a lack of integrity or a lack of judgment. You were married at the time, it's fine.”

Joyce: "It is important that you -  point out exactly what you mean by that. Because, yes, I -"

Husar: "I will if you let me finish."

Joyce: "My marriage broke down. I want to know where your issue is with that?"

At this point, moderator Hamish Macdonald jumped in and ended the arguing.

But it wasn't enough, with the rest of the episode continuing with a similar tone, leading to pleads on social media of a presidential debate-style mute button and tougher moderation.

Reply
Upvote
If this is representative of the best selection of females in politics there is little hope for the rest of our gender. It does little to inspire successful business women to want to give up a career and carry on like them.
R
redballoon 2 years ago