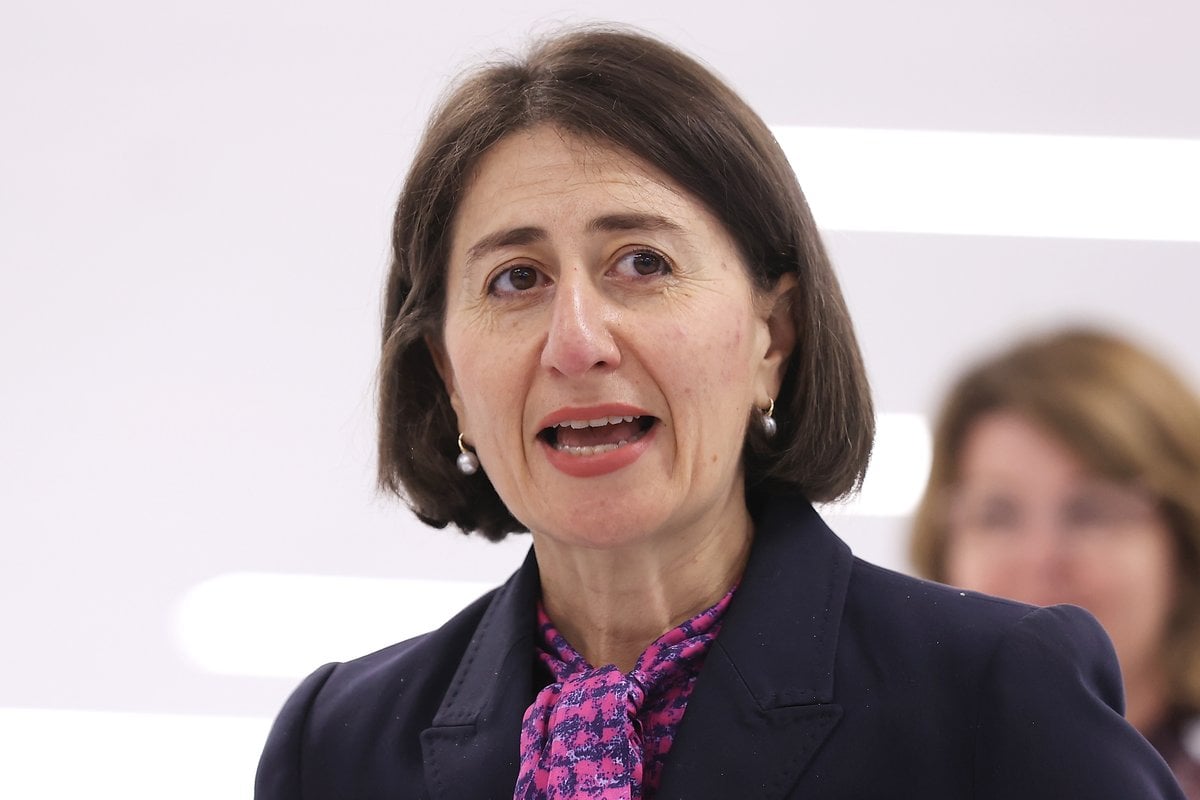 Five of the new cases were recorded in the 24 hours to 8pm last night, with another seven cases recorded since that cut-off time.

The case with no known source of infection yet is a child who attends a primary school in the eastern suburbs.

The rest of the cases are household or close contacts from previous cases.

"In some instances, the exchanges have been scaringly fleeting," NSW Premier Gladys Berejiklian said on Monday.

"People not even physically touching each other but literally fleetingly coming into the same airspace has seen the virus transferred from one person to another."

It comes as mask-use has been mandated in all of Greater Sydney indoors.

Concerns remain high over the extreme transmissibility of the Delta strain of the illness.

The most powerful man in Australian music, Denis Handlin, has been removed as head of Sony Music Australia over multiple allegations of a toxic work environment.

The allegations - which are aimed at the company, not an individual - span 20 years and include sexual harassment at work events, intimidating behaviour, alcohol abuse, racism and the unfair treatment of women in the workplace.

On Monday a statement was issued by the chairman of Sony Music Entertainment, Rob Stringer, saying Handlin would be leaving “effective immediately”.

"It is time for a change in leadership and I will be making further announcements in terms of the new direction of our business in Australia and New Zealand in due course," the note said.

In April, the company's executive vice-president of commercial music, Tony Glover, was sacked after it was found he had bullied and harassed several staff members.

The Sydney Morning Herald reports the latest investigation comes weeks after Sony Music's global head of human resources began an investigation into the workplace culture at the Australian arm of the business after a staff member in the Sydney office made a complaint.

'Hope I'm a better person': Joyce on his return to deputy PM.

Barnaby Joyce says he hopes to return as deputy prime minister a better person after defeating Michael McCormack for the Nationals leadership.

Mr Joyce was elected Nationals leader in a party room ballot in Canberra on Monday, returning to the job he lost more than three years ago.

On Tuesday morning, he was officially sworn in, arriving at Government House with Vikki Campion and their two sons.

Barnaby Joyce and wife Vikki greet a few Nationals colleagues at Government House, just ahead of his swearing-in as Deputy PM. @politicsabc pic.twitter.com/erkeFpMDvJ

The NSW MP quit in 2018 after scandals stemming from his affair with Campion, his former staffer, , as well as sexual harassment allegations he strongly denies.

In just a few hours time Barnaby Joyce will be sworn in once again as Deputy Prime Minister after Michael McCormack was dramatically ousted by his own party. #9Today pic.twitter.com/8Kpc1q6OIw

Mr Joyce said he wouldn't tell any group of voters what to think about him.

"I acknowledge my faults. I resigned as I should and I did," he told reporters at Parliament House.

"I've spent three years on the backbench and I hope I come back a better person."

Mr Joyce denied waging a three-year campaign to return to the leadership.

"If I thought it was going to happen, I would have brought my hat," he said, appearing without his Akubra.

Speculation grew over the weekend Mr McCormack was in danger of a second spill against his leadership after unnamed MPs briefed journalists.

"For the sake of good government - and not just good government - for the people of Australia, if you are going to say something, have the guts and gumption to put your name to it," Mr McCormack told reporters.

The prime minister will have to navigate a new dynamic with Mr Joyce widely regarded as a more combative force within the coalition.

A Victorian Labor backbencher has been named as the MP accused of having sex in his parliamentary office.

Under parliamentary privilege, Liberal MP James Newbury identified Ringwood MP Dustin Halse as the state government member at the centre of the allegation during a budget committee hearing on Monday.

"The Speaker's confirmed an investigation into the member for Ringwood bonking in his office," said Mr Newbury, holding up the Herald Sun's front page on the story from earlier this year.

It sparked a fiery exchange in the Public Accounts and Estimates Committee hearing, with chair Lizzie Blandthorn and other members of the Labor-majority delegation attempting to shut down questions.

A Liberal MP has sensationally used parliamentary privilege to name the Labor politician accused of having sex in his parliamentary office. https://t.co/eGP4CE28uS

"This is a workplace," committee member Pauline Richards said.

"We know the member for Ringwood's been bonking in his office and I want an update on where that's up to."

Mr Halse was elected in November 2018, reclaiming the seat of Ringwood from the Liberals in Labor's landslide state election win.

The young MP sits on the Integrity and Oversight Committee.

The growing outbreak in Sydney's east is at a critical phase, health authorities say, with "scarily fleeting" transmission causing concern.

The cluster climbed to 11 cases on Monday, with two new cases - to be included in Tuesday's numbers - identified.

Both people are close contacts of previously reported cases and tested positive while in isolation.

That's a positive sign contact tracing and isolation is working, Chief Health Officer Kerry Chant says, but concerns remain over the extreme transmissibility of the Delta strain of the illness.

"In some instances, the exchanges have been scaringly fleeting," NSW premier Gladys Berejiklian said on Monday.

"People not even physically touching each other but literally fleetingly coming into the same airspace has seen the virus transferred from one person to another."

Dr Chant said the contagious nature of the virus means the state is at a critical stage in managing the outbreak.

NSW Health named a new close contact site on Monday night, saying anyone who visited Fresh Nails at Westfield Bondi Junction on Friday, June 18, should get tested and isolate for 14 days.

A Chemist Warehouse in Sydney's CBD and the ANZ bank branch on the corner of York and Market St have also been added to the list, for Tuesday and Wednesday afternoon respectively, with patrons considered casual contacts being told to get tested and isolate until receiving a negative test.

"From one person alone we've had four or five cases ... even if they infect one or two each, you can see how it grows exponentially."

"We need to find all the cases, and make sure we identify the close contacts and casual contacts."

Eden star Samuel Johnson is recovering in hospital after being hit by a car on Saturday night.

His sister Hilde Hinton, gave the update on the Love Your Sister Facebook account which Johnson runs.

"I wish I didn’t have to tell you this," she wrote.

"Early Saturday night Sam was on his way to visit family when he was accidentally hit by a car. Our Ambos got him picked up and tucked away safely in hospital in record time. I followed them in."

"He's awake and not too happy that he doesn't have his pants. Nobody loves a hospital gown," she joked, adding that he had a "sore head."

Johnson raised $10 million for cancer research via his charity Love Your Sister which he started for his sister Connie who had bone cancer from age 11, uterine cancer from age 22 and breast cancer at age 33. She passed away aged 40 in 2017.

Police investigating the alleged rape of Brittany Higgins have given prosecutors a brief of evidence.

Earlier this year, Ms Higgins came forward with allegations she was raped by a fellow Liberal Party staffer in 2019.

She has since referred the matter to Australian Federal Police.

The ACT's top prosecutor has received a partial brief of evidence as charges against the alleged perpetrator are weighed up. https://t.co/AbxupD7y2U

ACT Director of Public Prosecutions Shane Drumgold has now received a partial brief of evidence and a request to provide advice on any prosecution.

It is not known when a final decision will be made.

The Tokyo Olympics will allow some local fans to attend when the games open in just over a month, organising committee officials and the IOC said on Monday.

Organisers set a limit of 50 per cent of capacity up to a maximum of 10,000 fans for all Olympic venues.

Tokyo 2020 announced that it will allow spectators at the Olympics this year amid the pandemic, setting a 50% cap at venues, up to a maximum of 10,000 people. https://t.co/SElvQVXF7m

The decision contradicts the country's top medical adviser, Dr Shigeru Omi, who recommended last week that the safest way to hold the Olympics would be without fans.

He had previously called it "abnormal" to hold the Olympics during the pandemic.

The Tokyo Games are set to open on July 23.

- Swedish centre-left Prime Minister Stefan Lofven has been ousted in a no-confidence vote in parliament, plunging the country into deep political uncertainty as it tackles the COVID-19 pandemic.

- Indonesia has passed the two million mark in coronavirus cases after a record in new infections, as authorities announced a tightening of restrictions to contain the spread in the world's fourth most populous country.

Reply
Upvote
Barnaby Joyce back we are certainly now at an all time low.

Reply
Upvote
3 upvotes
@mamamia-user-391653937  Words fail me, we just recycle idiots who get away with anything and the voters are loyal to them.