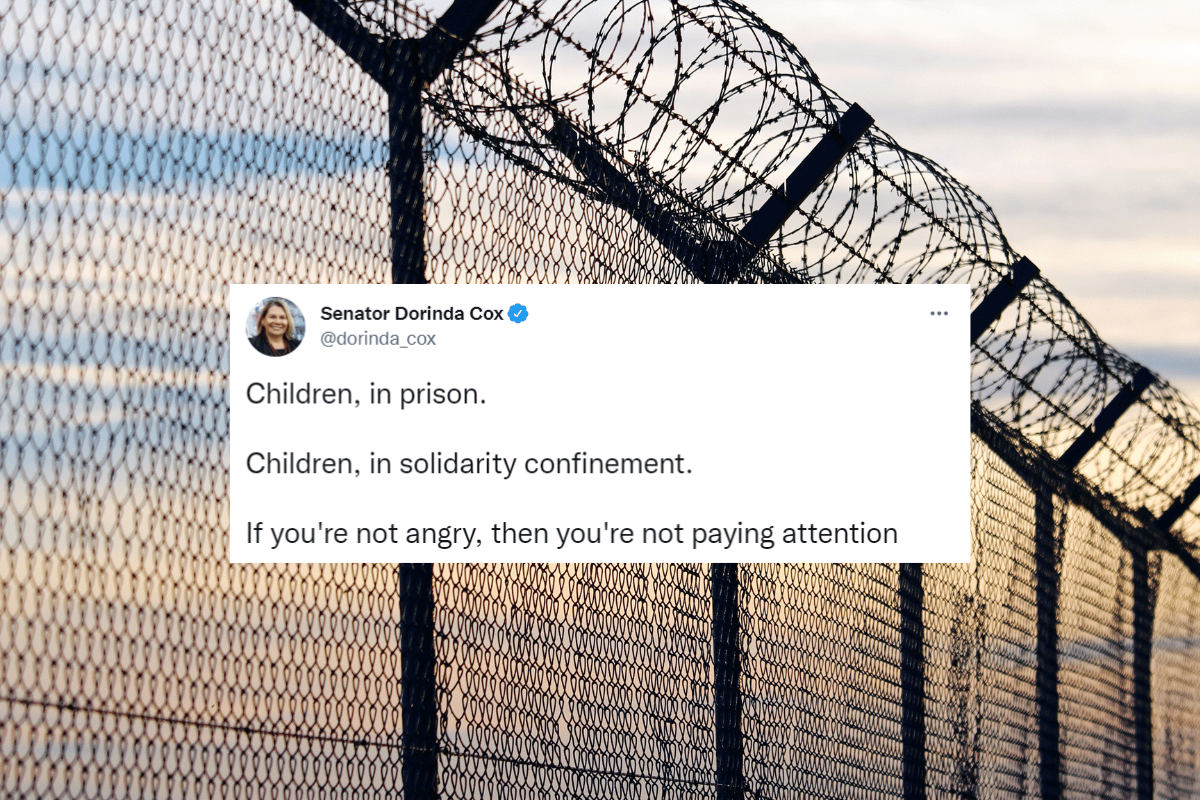 In Western Australia, a Noongar grandmother is currently fearing for her grandson's life.

The teenager is one of 20 boys, aged as young as 14, who the West Australian government plan to transfer from Perth's Banksia Hill juvenile detention centre to a maximum security adult prison.

Speaking to The Guardian, the grandmother, who can not be named, shared her grave concern for her grandson who has struggled with mental health issues and self-harm.

"I fear he is not going to live," she told the publication. "He has had three suicide attempts, that’s my biggest fear."

"I fear that being sent to an adult prison would push him over the edge… Him as he is; in his state of mind. I don’t think he’ll live long."

The decision to relocate the boys to a standalone facility at nearby Casuarina Prison has caused alarm amongst activists and political leaders, who have called for urgent reform of Banksia Hill.

However, officials say detainees have been destroying property, escaping from their cells, assaulting staff and harming themselves. They have promised the boys will be kept away from the adult prisoner population in safe and secure units.

WA's Department of Justice said the relocation plan would also allow other detainees at Banksia Hill to return to education and other programs that had been affected by the ongoing disruptions.

About 100 of Banksia Hill's 260 cells have been seriously affected and more than 30 are unfit for use.

"The Casuarina site, with its new, secure units, was the only safe and suitable option to ensure the young men were able to be kept in a location away from the adult population," said Corrective Services Commissioner Mike Reynolds.

Here's what we know about the unfolding situation.

Detainees have reportedly had their human rights violated.

Advocates have slammed the decision and called for urgent reform of Banksia Hill after an independent inspector found detainees were having their human rights violated.

In April, WA's custodial services inspector revealed there had been multiple occasions at Banksia where several boys spent less than an hour outside their cells.

A group of boys had also made repeated suicide attempts, having formed a suicide pact while isolated within Banksia's intensive support unit.

"Our youth justice system is breaching the human rights of young people, and Aboriginal and Torres Strait Islander children are the vast majority of those incarcerated," she said.

"The state government has ignored the root causes of the problems. This must be our wake-up call to fix our system and provide the early intervention, diversion, and rehabilitation supports children need in the community."

Greens senator Dorinda Cox also said children at Banksia Hill were being traumatised in ways that would harm them for the rest of their lives.

"I am appalled that yet again, children are being blamed for what is essentially a failure of duty on (sic) care on part of the WA Government," she wrote on Twitter.

No child should be in prison. I am appalled that yet again, children are being blamed for what is essentially a failure of duty on care on part of the WA Government. Thread/ #wapol https://t.co/as1oBHa7Qw

If you're not angry, then you're not paying attentionhttps://t.co/xeSe5Xu3uv

WA Commissioner for Children and Young People Jacqueline McGowan-Jones has also expressed serious concern over the transfer, saying total separation of the young detainees from adult prisoners at Casuarina is "not logistically possible".

Today I inspected the wing at Casuarina Prison where it is proposed that up to 20 young people from Banksia Hill Detention Centre will be moved to later this month.

I have serious concerns about incarcerating children and young people in a maximum-security adult facility. pic.twitter.com/9OzQSKSejj

A protest and planned class action.

About 600 past and present detainees have signed up for a planned class action led by Levitt Robinson Solicitors, alleging they suffered inhumane treatment, were excessively restrained and denied access to education.

The case is before the Australian Human Rights Commission, the first procedural step involved in filing a class action in the Federal Court.

Solicitor Dana Levitt says the decision to transfer detainees to an adult prison shows the extent to which WA's youth detention strategy has failed.

"This flies in the face of every single international convention to which Australia is a party," she told AAP.

Meanwhile, hundreds of people will be protesting the transfer in Perth on Thursday, marching towards the WA Department of Justice headquarters.

Social Reinvestment WA have also released a letter you can send to your local MP, calling for immediate action on Banksia Hill.

In Australia, children as young as 10 years old can be sent to prison.

Last year, the 31 UN member states, including Canada, France, Germany and Venezuela called for Australia to change the age of criminal responsibility.

The ACT and Tasmania have committed to raising the age from 10 to 14. However, children as young as 10 can still be locked up in Western Australia, which disproportionately impacts Aboriginal and Torres Strait Islander children.

According to Social Reinvestment WA, 72 per cent of the young people incarcerated in WA in 2019-20 were Aboriginal or Torres Strait Islander, despite making up just five per cent of the population.

With 81 children imprisoned in the state between 2020-2021, there are calls for the WA Government to raise the age of criminal responsibility to at least 14 years old.

"All children deserve the chance to thrive. The children incarcerated in WA are usually from our most disadvantaged communities. They need intensive support, care, and rehabilitation- not a prison cell. When a child ends up in detention, they have already been let down by every system," Sophie Stewart, Campaign Coordinator for Social Reinvestment WA, said in a statement last year.

Our current responses are failing, but there is a better way. Children deserve to be loved, supported, nurtured and listened to. Incarceration will NEVER be the right support for a child.
Take action: https://t.co/QNH0k5izv0#RaiseTheAge pic.twitter.com/JT2Te7j9FM

You can find a petition to raise the age of criminal responsibility in Australia here.