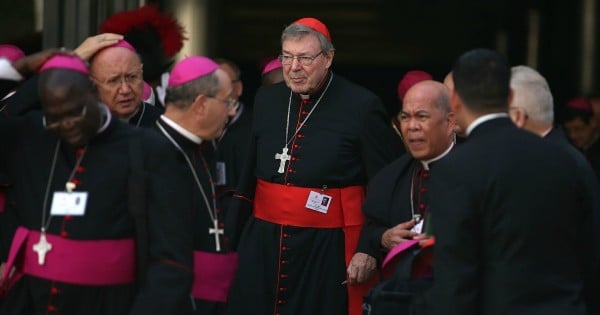 Recently, Mamamia shared a post written by comedian and radio host Meshel Laurie. Laurie and television presenter Gorgi Coghlan have set up a GoFundMe page, raising funds to send Ballarat survivors of child sexual abuse to Rome, to confront Cardinal George Pell.  Pell has been successful in his bid avoid testifying at the Royal Commision, and it’s not good enough.

The Send Ballarat Survivors To Rome has successfully hit its target of $55K and is continuing to grow.

You can still donate to Send Ballarat Survivors To Rome HERE.

I’ll keep this quick, because there’s a LOT going on in my world right now, but I realised over the weekend that I had to fit one more thing in – I had to help the Ballarat survivors of child sexual abuse get to Rome.

I don’t know any of these people personally, but my home-girl Gorgi Coghlan with whom I work on The Project on Friday nights, has been advocating for them and telling me about them for months. She and her family live in Ballarat, and she’s borne witness to the cloud of sadness that hangs over that town because of the selfishness, sadism and depravity of people who were entrusted with the care and education of its children.

Gorgi and I were outraged last Friday night as we watched The Project’s report about Cardinal George Pell’s successful bid to avoid testifying in front of the Royal Commission into Institutional Responses to Child Abuse, on the grounds his health is too poor for him to undertake the journey.

Watch Meshel and Gorgi discuss the Commission’s decision below (post continues after video).

George Pell made the journey less than 12 months ago. He returned to Ballarat in March of 2015 to visit his old school, St Patrick’s College, and appears to have made it back to Rome unscathed. However, when it comes to travelling to Australia to answer allegations of covering up child rape by priests his health is suddenly an obstacle.

Pell has won the right to deliver his testimony in Rome, sparing him the indignity of walking into the Ballarat Court House in front of the media and his critics. At this stage, he doesn’t have to look out upon a sea of faces during his testimony, like the victims did when they disclosed the circumstances around their devastated childhoods.

I mean, can you even imagine the courage it took to walk up to the dock in front of a courtroom full of people, and cameras, to talk about the times you were raped as a child? These people did that because they want justice and truth for themselves and the many others who either can’t bring themselves to come forward or aren’t around anymore to speak up.

We’ll never know how many victims there really were in Ballarat. partly because the suicide rate in the town is so high, well above the national average, and incredibly high among former students of those accused of sexually assaulting children in the area.

Up to a third of one class alone is known to have died through suicide.

What we do know is that for some survivors, the opportunity to eyeball Cardinal Pell feels like a crucial step in their recovery, and I for one, will do everything I can think of to help them make that happen.

I happened to be in Ballarat over the weekend, so I decided to track down a few spokespeople Gorgi had told me about with the hope of recording an interview for a podcast. I spoke to two survivors that afternoon, dads, husbands, businessmen, who told me about the burden they’ve carried since they were little boys sent off in crisp uniforms to school. And I wept. I pictured my own beautiful son and I wept. I asked if there was anything I could do and as luck would have it, there was. They asked me to help them get to Rome.

I hope you can sling us a few bucks and if not, please send good vibes to Ballarat’s survivors. May they finally find some peace.

You can find the crowd-funding page we’ve set up here.

*This whole plan is contingent on the Commission allowing witnesses to attend George Pell’s testimony, which they bloody should! If they don’t, no one’s going to Rome, but we’ll raise funds for a Healing Centre in Ballarat instead.

I would like to see the same amount of compassion shown for falsely accused priests as it rightly is towards actual priestly abuse and cover ups. You all need to know that 100 (at least) Catholic priests have been wrongly accused. But the media is silent on this outrage.

i'm really glad you instigated this, and enjoying sharing and watching it grow. :) Good on you, and all who are donating, sharing and making this matter.