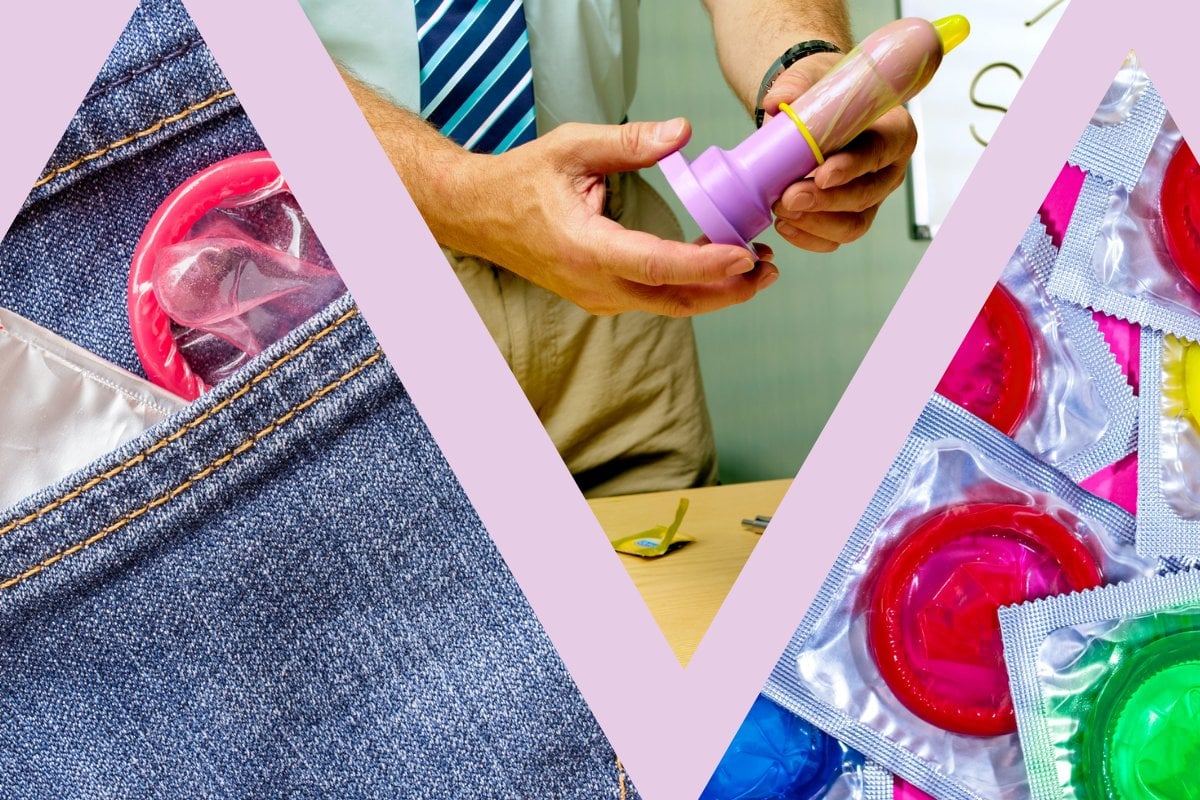 When you're a teenager and told you have a sex education class coming up, you do one of two things: aggressively giggle or freak the heck out.

Why? Because talking about sex at that age is a weird time.

While you reminisce about your awkward as heck teenage years, find out the juiciest results from the Mamamia sex survey. Post continues after video.

The majority of Australian schools offer sex ed as a way to inform the next generation of students about what to do, what not to do, and what everything means. But it doesn't seem like this has been done very well...

While we kind of knew that this was a problem area in education, it just became abundantly clear when The Undone hosts had a conversation about their shoddy sex ed experiences (or lack thereof). You can listen to that telling chat right here:

To keep the conversation going, we decided to ask 16 women the worst piece of 'advice' they were given in sex ed class. Here's what they had to say.

"I remember teachers placing their own bias on us for choices. For example, one teacher stated her preference for pads and it made me feel like tampons were bad to use (my parents were also fairly conservative and said we should only use pads). I also remember one teacher saying that getting the injection or Implanon for birth control was usually only for people with disabilities who wouldn't be able to remember to take a pill every day."

...FYI for those who are unsure, able-bodied people can totally use the Implanon.

"I wish I had even one sex ed class. I was at school when there were still nuns teaching and running the show, and their idea of sex ed was to discipline us if our shoes were too shiny because then the boys could see up our uniforms."

"We had to watch a video made by an ex-footballer who found God and became a born again virgin. He told us that women are flowers and every time they have sex with someone who isn't their husband they're giving away one of their precious petals until you're just a withered, sad stalk."

"All I remember from sex ed was asking my male teacher about how painful childbirth was (I was probably like 14) and he was so brutal about it that I had to leave the room because I was so distressed."

"We were taught by the nuns that we had to stay virgins until we were married, and sex before marriage was a mortal sin."

"I went to an all girls private Catholic high school and the principal at the time was a nun who taught us to wait until you’re married... to a man."

Here's another top notch sex chat on The Undone, which you can listen to right here. Post continues after podcast.

"My PE teacher in high school gave us the full 'Catholic school' sex ed talk (basically don't have sex until marriage) and then was arrested for an inappropriate relationship with a student a couple of months later."

"This wasn’t even sex ed, it was Year 7 history. The teacher told us if we’re ever being raped, to s**t our pants because the man will be so disgusted that he will stop."

"I had a teacher tell us that an abortion was worse for your body than carrying a baby to term, so if we became unexpectedly pregnant we should never terminate. Even if we were 12 years old."

"We had our first sex ed class aged 16, which seemed way too late. The class involved three things:

"In biology (not sex ed) in a diagram of the female reproductive system it described the clitoris as 'giving pleasure' - our teacher wrote 'no' next to that and told us it was wrong. We were in Year 10, and I certainly knew by that stage that it gave pleasure! Pretty sure the rest of the girls, at least, also knew that."

"I really respected our teacher when she said, 'ladies, ladies… always, and I mean this when I say it - try before you buy!'"

"One nun used to stick brown paper on the classroom windows when she discussed anything remotely connected with sex... so we wouldn't be distracted by anyone outside and start thinking 'unclean thoughts'."

"In 1968/69 we had one of those dreaded (but compulsory) 'Mother-Daughter Nights' the school used to organise. The mothers, who hated these things as much as we did, would each bring a plate of goodies to serve with tea, before the nuns would put clinical drawings of ovaries on the blackboard and show a 1950s film called The Dos and Don'ts of Dating. I'd pigged out on all the unfamiliar sweet treats and by the time we were sitting there learning about the mysteries of fallopian tubes, I was feeling distinctly queasy. Halfway through the film my overindulgence caught up with me and I bolted for the toilets to puke. As it was just at the point where the boy was pressuring the girl to kiss and 'go too far', everyone assumed I'd freaked out and the thought of sex made me vomit - or else I was secretly 'doing the deed' and nauseous from the guilt. There was no coming back from that humiliation... or convincing anyone (my mortified Mum included) that too many Chocolate Crackles was the culprit."

"We literally weren't taught anything about sex, instead we just had to watch a video close up of blood coming out of a vagina to teach us about periods."

What was your sex ed experience? Let us know in the comments below!