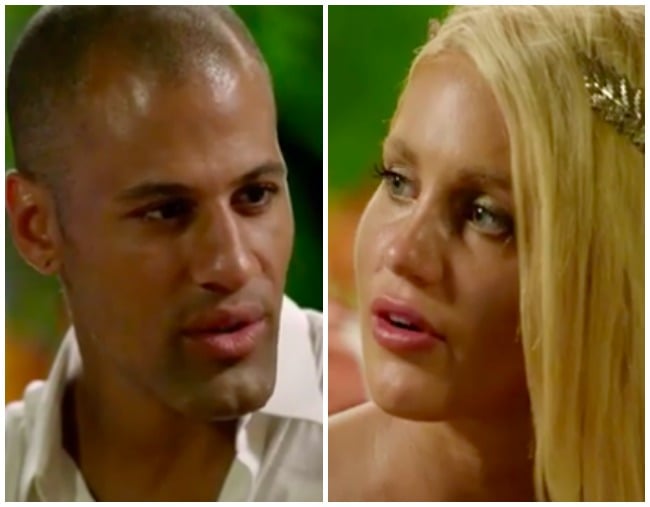 Sometimes when you watch Bachelor in Paradise, Laurina gets offered a date card in the middle of her nightly beauty regime and yells that a) this is all very rude, and b) she’s going home now.

Other times, a random Canadian no one has ever seen before walks in and remarks that Jarrod has had a lot of sun.

There’s pettiness. Tantrums. Made up rules. Drunk people crying for no reason.

Then, well, then there’s this.

It's not that nothing happens (nothing happens) it's just that the world is fundamentally exactly the same at the end of this episode as it was at the beginning, which would be a waste of our time if we had anything at all better to do.

So little happens, in fact, that even Osher took the night off, choosing instead to have a friendly drink with Wais who reminded him yet again, "we are not friends. We are not friends until you return me to my family."

We begin with an explanation that tonight, each couple will be having their last date before the commitment ceremony tomorrow, but... pause.

That's just... that's just a concept straight up stolen from Married at First Sight and honestly if they thought we wouldn't notice they have vastly overestimated our intellectual integrity. A commitment ceremony is fundamentally unnecessary in this context. These people chose to be in relationships with each other so why would they need to commit... again?

John Aiken is pissed and honestly we don't blame him.

Jarrod and Keira are going on a yacht for their final date, and Jarrod is wearing neither a rashie nor a hat.

Keira looks into his eyes and compliments how green they are, but it should be noted that they are only green in contrast to the intense shade of burn on his face, but also his body.

We're shown flashbacks which is frustrating because WE. WERE. THERE. We have always been there. This show has only been going for like two weeks, where did you think we went?

Jarrod is nervous, obviously, because last time he was in Fiji he got rejected by Sophie Monk for Stu f*cking Laundy, which is the sort of blow a person never forgets.

Jarrod. You don't need to remind anyone about Fiji. All of Australia saw. Everyone was watching.

"The life I want to live is with her and that's going to be forever and ever," Jarrod says and NO. You need to not think about forever and think about now because you're getting sunburnt and it hurts.

He also says his parents gave him once piece of advice before entering paradise, and it was "just be Jarrod", which is lovely... but not necessarily good advice when you say things like that ^^^.

We feel like the producers are trying to make this into a romantic comedy without the comedy and we don't appreciate it.

Somewhere... else... Ali and Grant are obviously riding a two-person-bike on an abandoned train track and we don't mean to be negative, but we don't at all think the peddling is doing anything. The bike is just definitely motorised.

Grant tells the camera that he's thinking about proposing to Ali, which... yeah, we know... the Daily Mail already told us and when it comes to Bachelor in Paradise related gossip their strike rate has been astonishingly high.

They 'cycle' through a small village, and speak in a patronising tone to Fijian children who are just trying to go about their day.

Ali remarks that she thinks Grant would be a wonderful dad because how a person interacts with random Fijian children next to train tracks that are used exclusively for bike riding is a really good indication of what kind of father a man will be.

Oh, Grant is a lil' bit making Ali move to LA because apparently it's much easier for her to move to the U.S. than for Grant to move to Adelaide. That sounds like exactly the kind of thing men tell women to make them sacrifice their shit while they do whatever they want but okay.

Look. We're off Grant. No one has the right to take a girl out of Adelaide. Especially when we can say with 100 per cent certainty he has no idea where/what an Adelaide is.

Meanwhile, Tara and Sam are going on a cooking date, which is weird because at no point do either of them cook.

Afterwards, they sit on a random lounge and talk about their feelings and yeah they're probably the most legit couple on the show but THAT DOESN'T MAKE THIS INTERESTING.

After their date Meghan asks Jake if he might a lil' bit cheat on her while she's away for work after the show ends.

He just says, "... Noooo" as if maybe he didn't fully understand the question and chooses not to elaborate any further.

Jake thinks he's meant to say he's falling in love so goes with that, but then laughs because even he knows he's full of sh*t.

Ep 14: The Twins recap Bachelor in Paradise: One man’s rose is disqualified.

Ep 13: The Twins recap Bachelor in Paradise: Oh. We know exactly who's getting engaged.