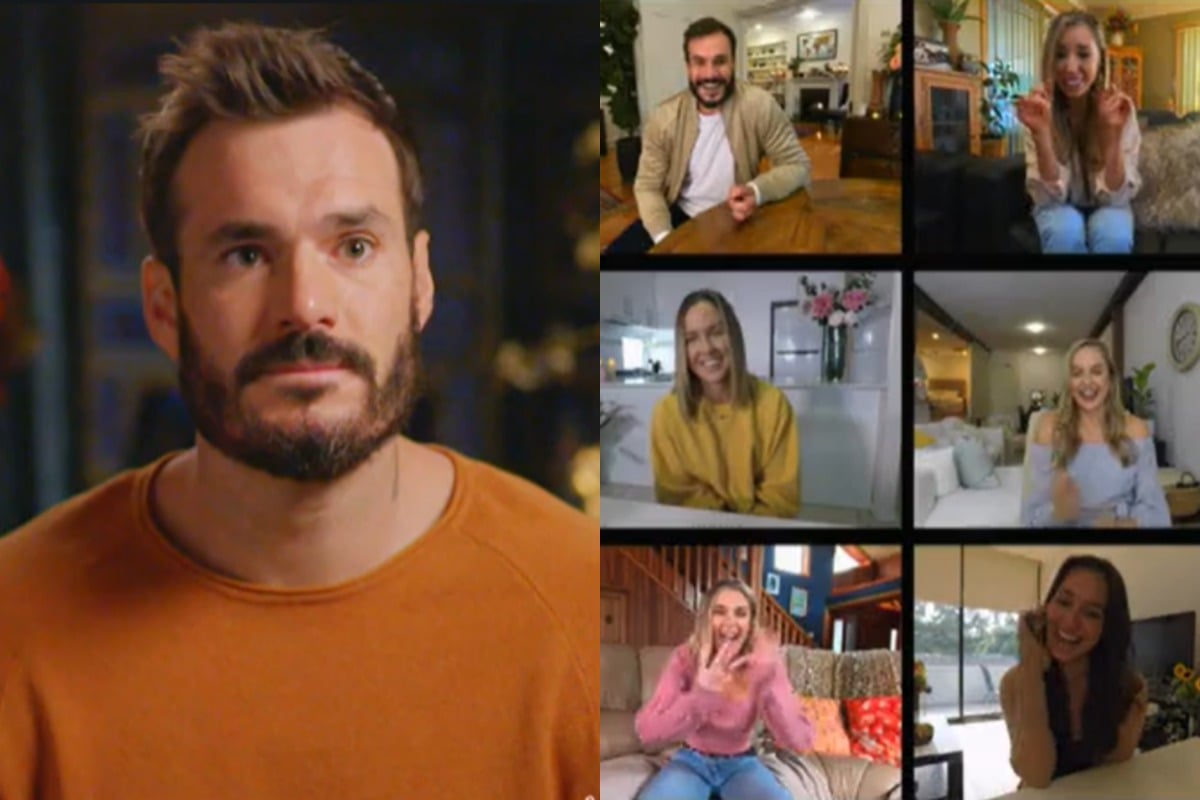 For recaps delivered straight to your inbox, click here and select "﻿﻿﻿﻿Mamamia Recaps" so you don’t miss out on any of the laughs!

Down your mango daiquiris quick, pals. It's almost time to hide away our floral shirts and swimsuits, because we're soon leaving Paradise for a brand new Bachelor.

Channel 10 have announced the 2020 season of The Bachelor, starring Survivor's Locky Gilbert as Mr Bach himself, will begin on Wednesday, August 12.

That is SO SOON AND WE'RE EXCITED.

Like the rest of the world, The Bachelor was impacted by the COVID-19 pandemic. Filming was postponed, and virtual dates were a thing, so this year's show is going to look very different to usual. On the bright side, hopefully this means no bath tub date (spoiler: it does not).

With less than a week to go, this is everything we know about the upcoming season.

Who is Locky Gilbert?

Ladies and gentlemen, get your roses ready! We'll see you 7.30 Wednesday, August 12 🌹 #TheBachelorAU

Locky is a very adventurous 30-year-old who previously appeared on season two of Australian Survivor. Seriously, he's very adventurous: He is an adventure guide, experienced cave diver, base jumper, mountaineer and athlete.

Locky is based in Perth and is hoping to find a "best friend" on the reality show.

"I really want to find love. I’m pretty content with my life at the moment. I go on these crazy adventures, but I'd love someone to share the memories with.

"I've got best friends, but I want to find that one best friend that I can spend the rest of my life with. This is an amazing opportunity to hopefully find someone special at the end."

Locky and Brooke were nicknamed "king and queen" and "husband and wife" among the other contestants thanks to their close relationship.

Throughout the show, Locky even built a "double bed out of bamboo" to share with Brooke.

After Locky was confirmed as Bach, Brooke said via an Instagram post that she had been "blindsided" by Locky's new reality TV venture.

"Yes, I'm hurt, and a little blindsided (excuse the pun) but I wish the best for Locky, I always will. (Secretly I hope he stacks it and splits his pants on day one)," she wrote.

"I guess we had different things planned in our heads for what was to come over the next few months but you can't be mad at someone for doing what they feel is best for them, even if it does sting a little."

Prior to meeting Brooke on All Stars, Locky was in a long-term relationship with his ex-girlfriend Jordan Cayless, who appeared on the most recent season of Love Island Australia.

So far, we have met six women and a penguin vying for Locky's heart. 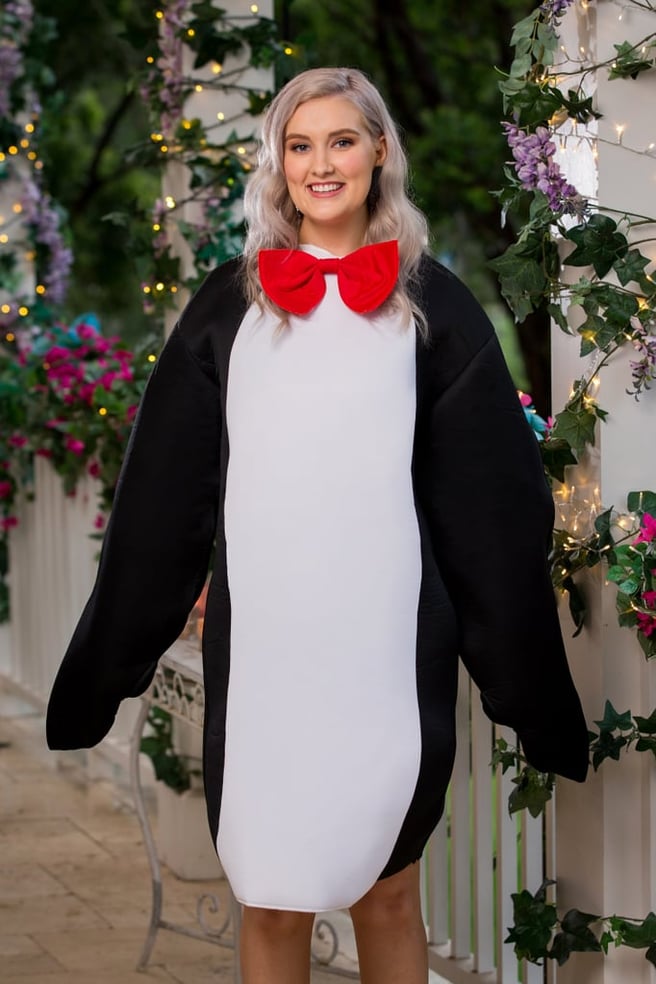 Rosemary turns up as a penguin and we have absolutely no idea why, but Locky seemed to like it. Judging from the latest promo, she uses her costume to grab Locky's attention and show him some kind of 'move'? Is it hidden talent? How well she moves underwater compared to an awkward waddle on land? Who knows. 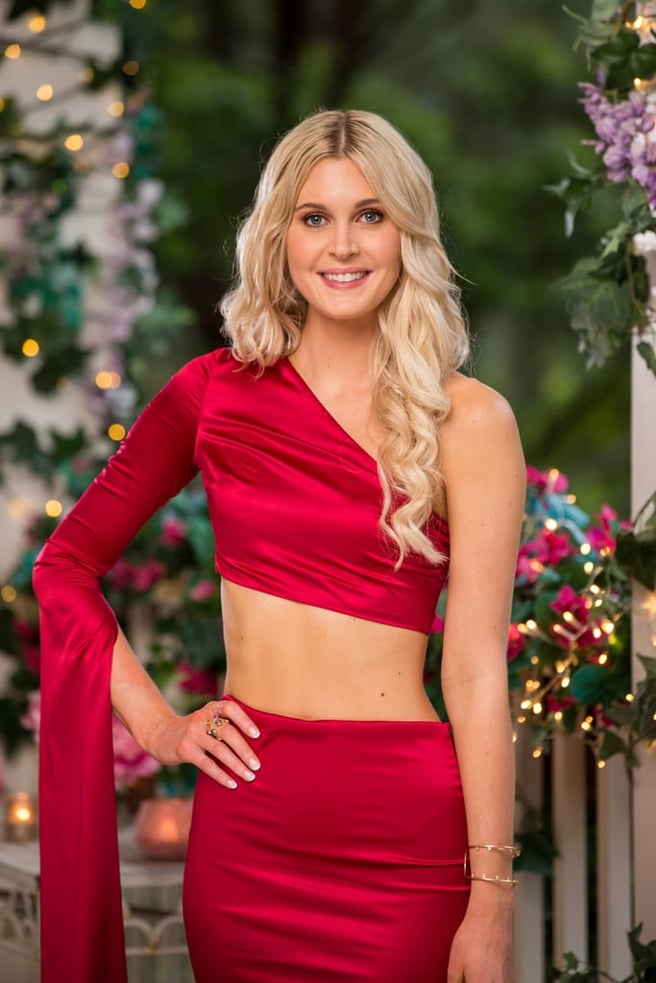 Steph enters the mansion after telling Locky how much she loves burritos. Relatable. 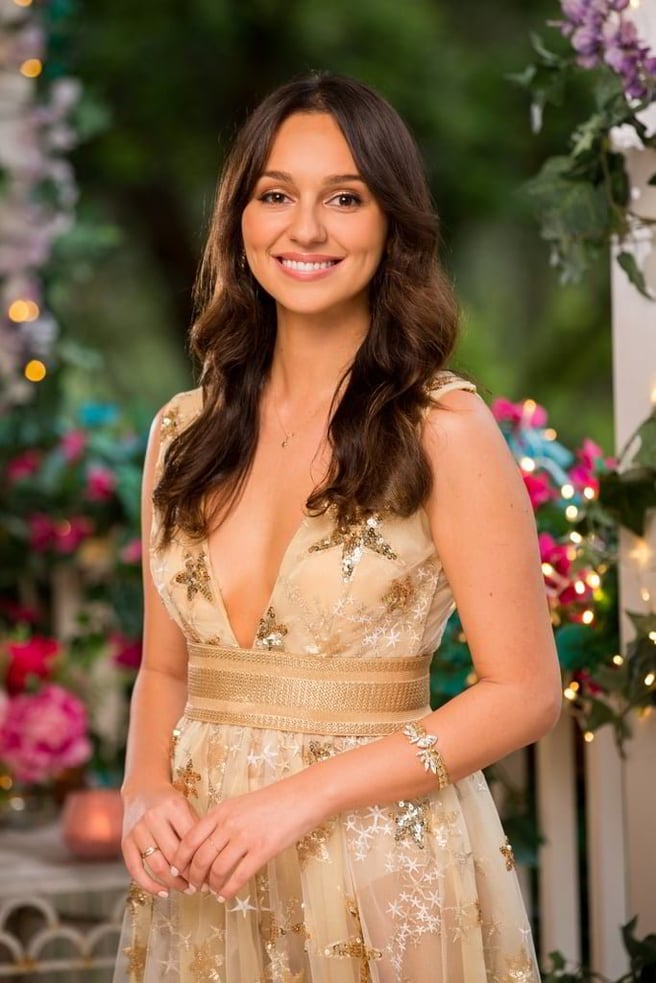 Okay, Locky told Bella he "got lost in her eyes" the very first time they met, so this looks very promising. 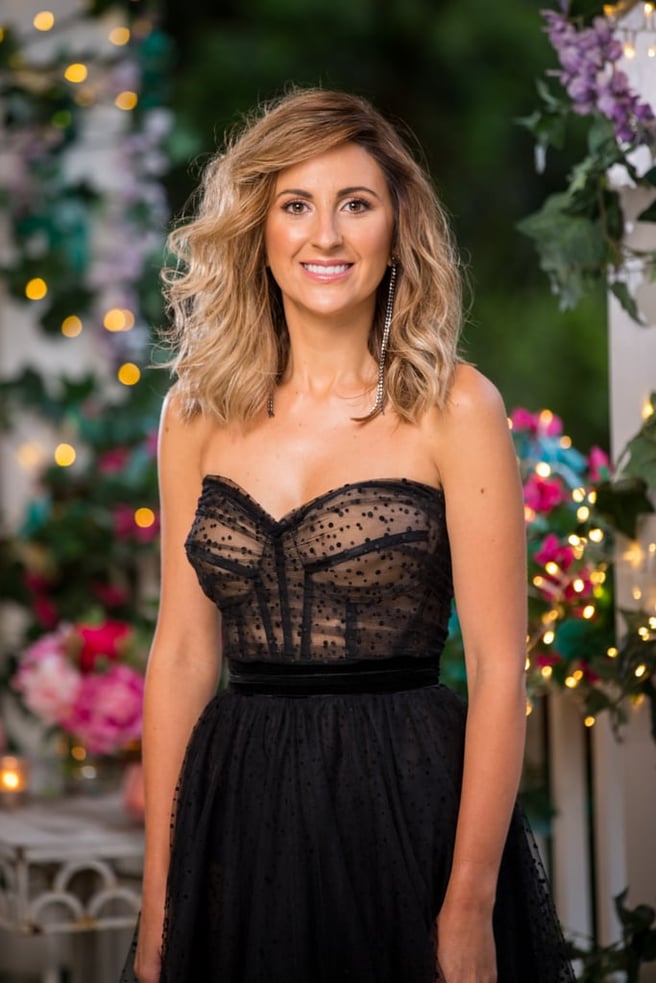 Irena is a nurse who turns up to the mansion with a stethoscope: A clever way of checking Locky's pulse and getting his shirt undone. Kudos, Irena, kudos.

Dancer Nicole is shown jumping into Locky's arms in one of the show's promo videos... and we can't blame her.

She seems to make a good impression too. "Nicole has a lot of energy and that's someone I want to be around," says Locky. 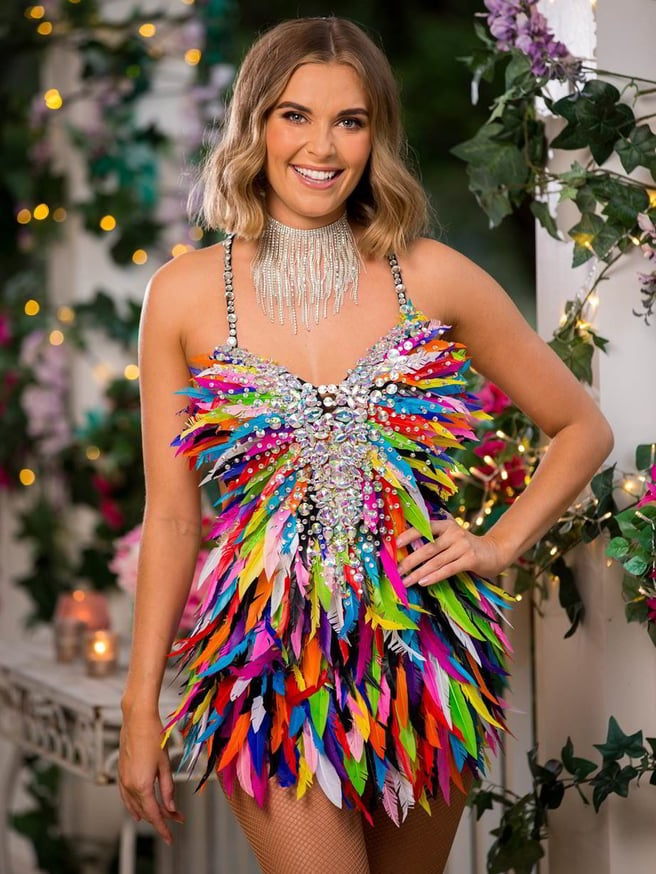 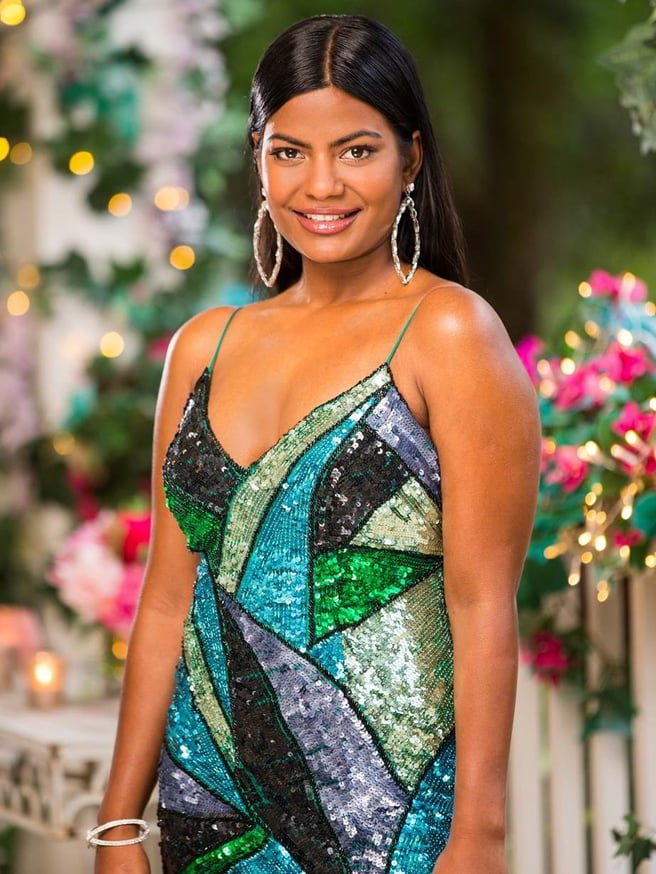 Laura prefers the finer things in life. "I quite like a Louis Vuitton handbag, Chanel earrings, the Porche Cayenne Turbo," she says as she arrives at the mansion. 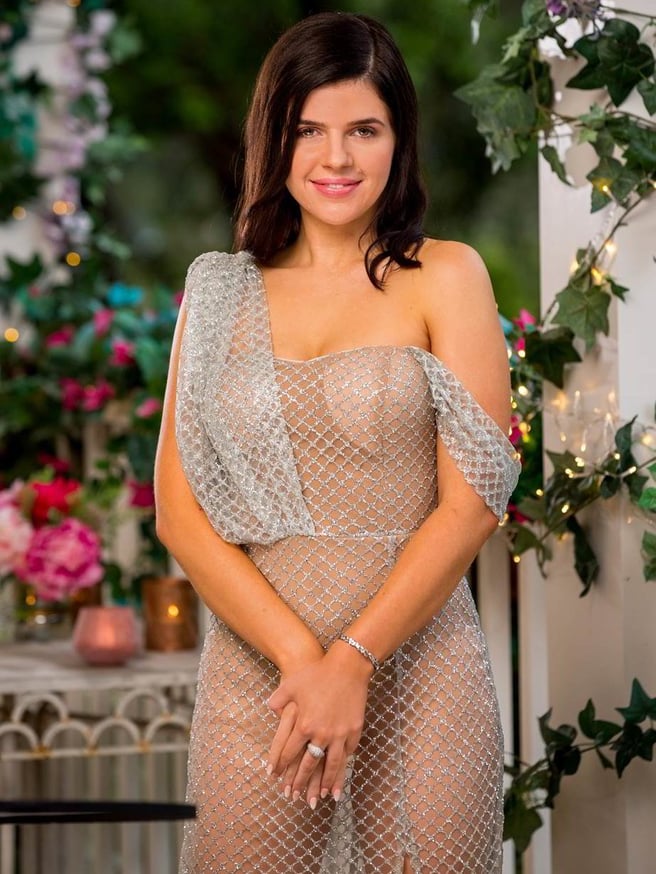 Australian bachelors are usually a little more... chill than their American counterparts, who often propose to their chosen woman at the end of the season.

But Locky has hinted he'd be willing to do a Blake Garvey (no, not like that) and get down on one knee in his finale.

"I'm here to find love. I would love to get down on one knee at the end," Locky said in one of the first ads for the show.

In the show's latest promo video, Locky explains that he's fallen in love with not one, but two different women.

"It shouldn’t be this way, but it is. I’m in love with both of them," Locky is heard saying.

"It’s ripping me apart. You don’t break up with someone that you love."

The video then cuts to Locky crying with his head in his hands.

Yep, things are going to get intense.

In late March, filming for The Bachelor was suspended indefinitely due to concerns over the coronavirus pandemic.

Network 10 and Warner Brothers made a joint decision to halt production but planned to continue filming at a later date.

In a statement to Mamamia, Network 10 said that despite employing extra precautions on set, it was "no longer practical to continue with production".

"The health and safety of our participants and crew members is our number one priority. These are extremely difficult times for all Australians and for our industry, and the full extent of those difficulties will not be known for some time to come," they said.

"Our decision to halt production was made after considering all available options. We will resume production when it is safe to do so.

"While this decision is disappointing, we remain committed to keeping our audiences entertained and connected in these challenging times. We are also committed to ensuring the television industry remains in as strong a shape as possible so we can continue to bring Australian viewers local content."

Still can't believe we had this beautiful waterfall all to ourselves. Over 100m high, you can just feel the power in your bones. Is there anything better than nature? 📸@lifebeforekids @lskd @eastjava @fourelements_adventure #indonesia #eastjava #nature

Earlier in July, Ten confirmed the cast and crew had returned to filming in Oxford Falls, Sydney.

"We were three-quarters of the way through the series when we went into lockdown, and basically all the cast returned home," Stephen Tate, the network's Head of Entertainment, told The Australian.

"So we would find ways for the show to continue in the same way that dating continues in the wider world... We call it 'Love in Lockdown.' They continued to date virtually, both as single dates and as group dates."

Once filming did resume, it looked a little different with twice-daily temperature checks, daily sign-in and out requirements and restricted access to certain areas of the set.

We got our first look at what Locky's "love in lockdown" will be like in the show's latest promo video.

By the looks of the video, the season starts off relatively normal, with the usual dose of drama, shirtless Bachie shots and yacht dates. But then the contestants are informed they need to leave the mansion.

"We have to stop production. We can’t keep everybody safe. You’re going to have to say goodbye to all of them tonight," Osher is heard saying.

We then see Locky and the rest of the girls embark on a series of Zoom dates, including a virtual bath date, which already makes us feel... uncomfortable.

Strap yourselves in, Australia! This season is like no other... get ready for adventure-filled dates, an adjusted reality with Love in Lockdown and an ending you wouldn't believe 👀. It all kicks off 7.30 Wednesday, Aug 12 on 10. #TheBachelorAU

The new season of The Bachelor will premiere on Channel 10 at 7.30pm on Wednesday, August 12.