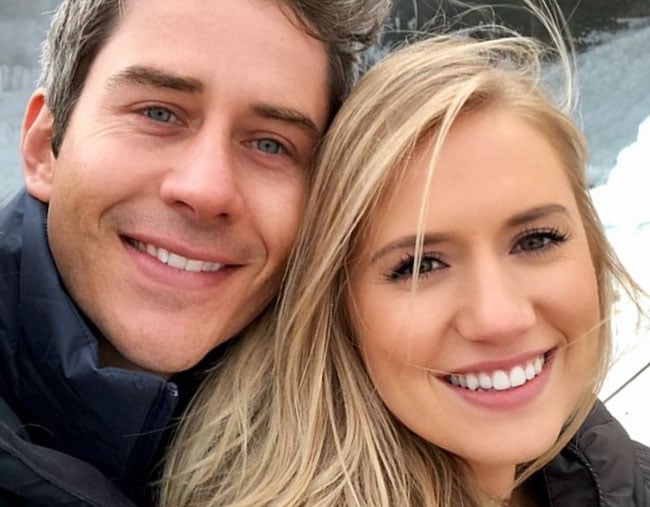 His name is Arie Luyendyk Jr., and in the space of just 24 hours, he became the most hated Bachelor in the history of the show.

How, you ask? First, he proposed to one woman, Becca Kufrin. Then, he broke up with her - on camera, no less - revealing he was still in love with runner-up Lauren Burnham and wanted to pursue a relationship with her instead.

Then, in a live television special, he proposed to Lauren.

It was all very awkward and weird and, yes, borderline cruel.

WATCH: US Bachelor Arie proposes to a second woman in as many days.

It didn't seem like things could get much worse for Arie. Until April Fool's Day rolled around.

Wanting to take advantage of the one day a year when it's appropriate to pull the public's leg, Arie shared a snap of what looked to be a baby bump on Twitter.

"Secrets finally out, we have a bunny in the oven!" he wrote, tagging his fiancée.

Secrets finally out, we have a bunny in the oven! @laurenburnham91 pic.twitter.com/Mmx50ePDaB

Less than two hours later, the 36-year-old revealed to his followers that it was a joke and Lauren was not, in fact, with child.

Now the pair, who have dealt with public criticism since they were able to go public with their relationship, are facing backlash from their fans, who have argued that pregnancy should not be treated as a prank.

"A lot of people struggle with getting pregnant or [losing] babies," one fan wrote, while another added: "Be better than that".

"Your 'joke' is my living nightmare, and it is more painful with each baby I have lost," one fan wrote .

"1 in 8 women struggle infertility. I really and truly hope that if this is a joke, when you do try to conceive you aren’t met with the harsh reality that so many face," another fan shared.

To make matters worse, Arie appeared to joke further about the controversy by sharing snaps of himself baking on his Instagram stories.

"Sorry if you were offended, but we really are making a Dutch Baby," he wrote.

Today, Arie has issued a more heartful apology, telling fans he "in no way meant to offend" those who struggle with infertility.

"I do have sympathy for women struggling from infertility," he wrote on Twitter.

"I apologise if you were affected personally by my post."

I do have sympathy for women struggling from infertility. My April Fools prank was in no way meant to offend women who struggle with that. I apologize if you were effected personally by my post.

Arie and Lauren's photo comes after a woman's viral Facebook post about prank pregnancies resurfaced leading up to the joke holiday.

"This is what it looks like to have a miscarriage," US woman Kayla Lee Welch posted to Facebook.

"This is why your April Fool's joke isn’t funny. This is why it's not funny to lie and joke about being pregnant.

"Please think twice before you post that April fools joke. Because what's funny for a second in your eyes crushes someone else's heart for eternity."