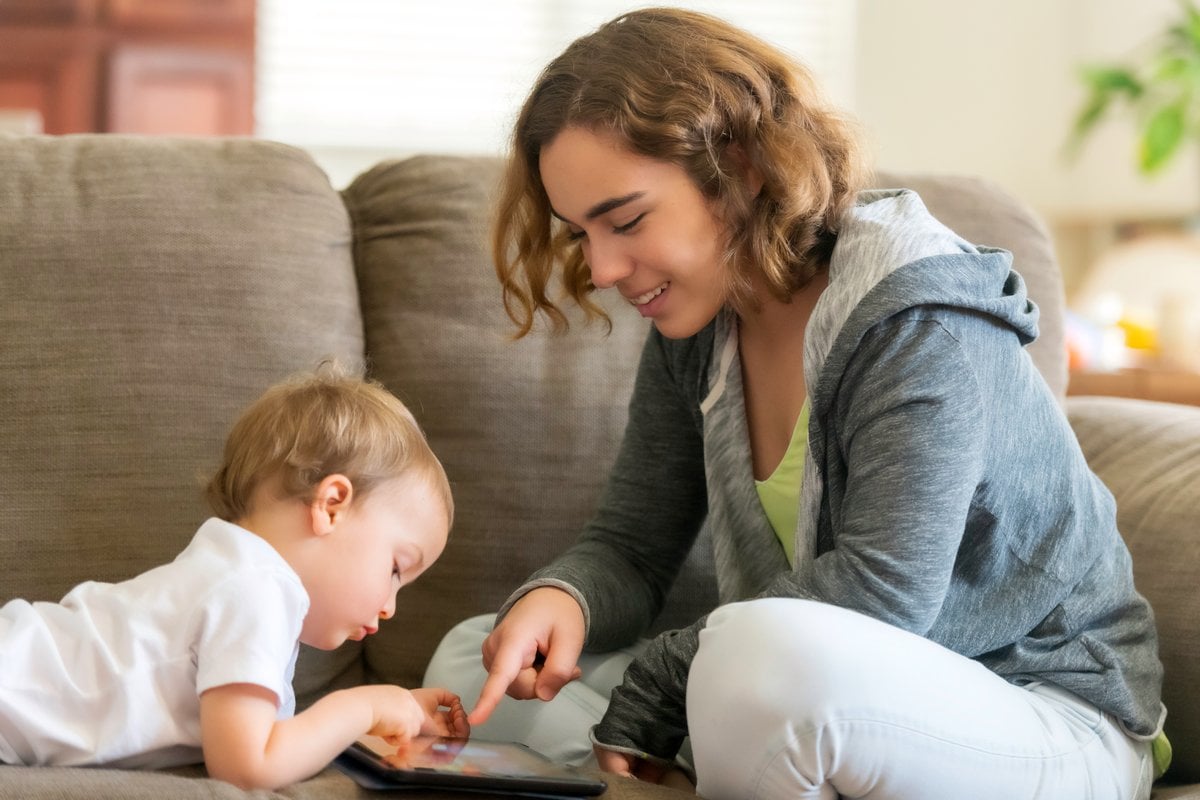 All parents need a night out. But if you don’t have family or close friends nearby and you need to hire a babysitter, you could be down $100 before you’ve even bought a glass of the second-cheapest white wine.

One low-income single mum raised the issue of babysitting prices in the Mamamia community.

This mum works five days a week as a carer and a housecleaner, and she’s also studying, as well as bringing up her son, who’s just started school.

“I find myself comparing me being on my feet all day compared to someone coming, sitting on the couch and chilling with my kid for that money,” she wrote.

“I am organised so dinner would be good to go. I have wifi. Stream all you want. My kid has his Switch and will happily chill playing or watching a movie. I’ve always thought I’m literally working to pay a babysitter just for a night out. Opinions on pricing? I’m going to say more from lower-income, single-parent families.”

Oh, she got plenty of opinions, and not just from lower-income, single-parent families. Some people had a problem with the way she described a babysitter’s job.

“They aren’t just chilling with your kid, they are there in case of emergency, as well as looking after the most precious little person,” one said. “We paid a babysitter $30 an hour on our wedding night. She was fantastic.”

“I always paid my sitters well to look after the most valuable thing in my life,” another added. “You are not paying for the sitting down. You are paying for the ‘what if’.”

One woman had a problem with the entire question.

“It’s so frustrating when people expect babysitters and other care work to be cheap because they insist they work harder,” she wrote. “This whole post just screams, ‘I don’t value women and historically female unpaid and underappreciated roles/jobs enough to pay them MINIMUM WAGE.’”

There were babysitters who responded, including a woman who owns a babysitting agency.

“It blows me away the amount of people that demand, for any less than $25 an hour, someone that has their Working With Children Check, first aid, police check, a minimum of three years’ experience working with children and ideally a childcare qualification as well,” she said.

This woman has heard some horror stories from parents who’ve hired teenagers on the cheap and come to regret it.

“One time a mum called and said she had a teenager over who left her Pill tablets out and the baby ate them. The mum only found out because some pills were in the baby’s poo.”

That is, frankly, terrifying.

So how much are parents paying for babysitters? Is $25-$30 the going rate?

“That’s about standard,” one mum agreed. “I’ve even had someone quote $35 an hour plus a $50 booking fee, but she wanted cash in hand so I passed on that one. I pay my girl $20 an hour, thankfully, and she is amazing.”

One mum, who was single at the time, got a 23-year-old family friend to babysit when she went on a rare night out. She was away from 5pm till 1am, and was expecting to pay the family friend $70 all up.

“The kids were eating dinner, bathed, dishes done when she walked in, and they went to bed at 7.30pm, then she watched Netflix. Actually, she also invited a bunch of friends over and they helped themselves to my alcohol cupboard too (she sent a text asking about the friends and I said okay). She charged me $200.”

But there are well-qualified sitters out there who work for less than $25 an hour. A woman who used to be an early childhood educator says she would babysit on the side for an hourly rate of $10-$15.

“I get what everyone is saying, that you wouldn’t pay childcare fees less than that, but a reminder that this person at your home, mostly while your child is asleep, would not be educating your child, creating plans based on a curriculum, watching up to 30 children at once, etc.”

Plenty of parents still use teens for babysitting. One mum said she calls on her friends who have 14- or 15-year-old daughters, offering them $10-$15 an hour.

Another said her 16-year-old daughter looks after local kids for $15 an hour, including playing, doing readers and putting them to bed with a book.

“Keep in mind, not all are conscientious, as some girls from her school have said they charge around $30 and sit on their phones,” she added. “Mind you, when I was a teen, I would always raid the pantry, so I can’t talk!”

Another mother has worked out a two-tier system for babysitters.

“I pay our younger one – 14 years old – $15 per hour, but our kid is asleep when she arrives and we are literally next door so we keep an eye on our kid via the wifi monitor. Our ‘proper’ babysitter is $25 an hour and does dinner and bedtime put down.”

Yet another pays school and uni students whatever their age is, in dollars per hour.

But for a lot of parents, no money changes hands. Instead, it’s all about “swapsies” – having another couple’s kids over for a sleepover while they go out, and then expecting them to return the favour.

Sometimes, people who like a system have taken it to a whole new level.

“When I was younger, Mum and Dad were part of a babysitting club,” one woman remembered. “Mums in the local area would all have tokens – they could earn them and redeem them.”

But the last word goes to a mum who knows exactly where the mum who wrote the original post was coming from.

“She’s not looking for an educator or someone to care for her house,” she wrote.

“A little more sympathy here for mums without a big income, or without partners, or without family nearby, or with none of them, would be welcomed.”

Reply
Upvote
3 upvotes
Someone’s limited support network or low income isn’t a reason to break basic labour laws. You can’t pay less than minimum wage no matter how ‘easy’ you think the job is.
The answer isn’t to push wages down for babysitters, it’s to look at how we can get wage equality across gender and class so everyone can afford basic help. I bet more people could pay their babysitters if we capped CEO bonuses and taxed corporations.

Reply
Upvote
4 upvotes
Unless parents want what they do with their kids described as "chilling on the couch" I would be very cautious of describing that as all a babysitter does! It says it in the article, you aren't paying them to sit on the couch you're paying them for What Ifs and if we think about it the What Ifs we are most scared of can be pretty extreme! A break in, a very ill child...
I do have sympathy for people with a limited support network...
It's in all of us to build these support networks with local free library sessions etc. but it is still hard
News
General
Opinion
True Crime
Politics
Sport
Explainer
Entertainment
Celebrity
Reality TV
Movies
TV
Books
Rogue
Royal
Lifestyle
Beauty
Fashion
Weddings
Home
Wellness
Health
Fitness
Travel
Food
Parents
Before The Bump
Pregnancy
Baby
Kids
Teens
School
Parent Opinion
Work & Money
Money
Finance
Career
Lady Startup
Relationships
Sex
Dating
Separation
Friendship
Family
Real Life
Couples