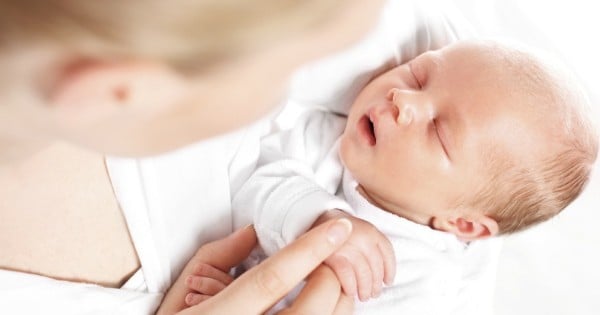 You’re pregnant. Your partner offers a name for your unborn child. Claire, he suggests. You like the name so when your daughter is born, that’s the name you decide on.

Then, when your baby is four-weeks-old, you find that the name ‘Claire’ is really the name of your partner’s former fling, a woman he had previously slept with.

For one woman, there is no need to imagine because this is the reality she has is faced with, after being told by her now fiance’s family that he named their daughter after a woman who he has a lot of history with.

Reddit user nameconfusion took to the site to share her unfortunate story. During a visit from her fiance’s sister-in-law to see their new baby, the new mum found out the truth about where her partner’s inspiration for the name came from.

She wrote, “She (her fiance’s sister-in-law) at one point told me that their whole family was surprised we chose that name (Claire) for our daughter. I asked her what she meant, and she mentioned something about it being a name with a lot of history for my fiance. I still had no idea what she meant, so I asked her to explain why the name had a history to it. She then revealed that the name was the same one that my fiance’s crush has.”

nameconfusion goes on to explain that while everyone calls her fiance’s former fling ‘Kaitlyn’, her given name is actually Claire. And it appears that Claire is still very much a part of their life, with the woman explaining that her fiance always said she was a friend of his and nothing more.

She adds after more questioning of her fiance’s sister-in-law, “I also found out that my fiance has not been honest about the nature of his relationship with Claire. His sister-in-law explained that my fiance has had a crush on Claire since he was 12. It lasted during their teenage years and beyond, and briefly turned physical during one summer break while they were in college. Even when my fiance was in law school out-of-state, he still fixated on Claire.

“His sister-in-law said that he hadn’t said anything recently to make her think he still had a crush on Claire, which made me feel somewhat better, but I know for a fact that he still meets with her on occasion when he visits home. She also said that in college he told his parents that Claire was the only woman he ever loved. (Now, I know that people change over time, and that he made this statement a long time ago, but I can’t help but worry that he still feels this way. It’s not like he was a child when he said it.)”

The woman, who has been with her partner for two years, now has deep concerns for their relationship, writing, “I can’t help but think that it is a tribute to Kaitlyn on the part of my fiance. I wonder if he would even be with me if he could be with her.”

When the woman confronted her fiance about the situation, she explains that he downplayed it and denied that he still felt that way. He goes on to say that he didn’t want to mention anything to her as he was sure she would overreact.

WATCH ten baby names that have been banned from use. Post continues after video…

When she asked if the name was in honour of Kaitlyn, he denied doing it on purpose. “He said he never even thought about Claire being his crush’s given name, though I find that hard to believe,” she continues.

Unsurprisingly, the new mum no longer likes the name of her daughter and feels it reminds her of her fiance’s lies. She also admits that she is considering postponing their wedding and isn’t sure about their future relationship together.

“We’re in the middle of planning a wedding in June, but this whole thing has made me wonder if my fiance really wants to be with me. He says that he loves me more than Kaitlyn, but I feel like his actions say otherwise. Am I right to see this as a huge red flag? I am debating whether or not to postpone the wedding until I can determine whether he really wants to be with me, but I am not sure if that would be too drastic. Is that a bad idea? I just want to be certain that he is choosing me and not settling because he can’t have his first choice,” she concludes.

Wow,if the baby is not that old,I would definitely change her name.That is so disrespectful,and it was sort of an inside joke that everyone was aware of,except her.I wouldn't marry him,it's obvious that he thinks highly of this woman.She deserves that kind of admiration,especially if she plans on spending the rest of her life with this guy!

He is definitely still fixated with his ex girlfriend no matter how much he downplays it. The fact that he suggested it and it wasn't by coincidence that she suggested and he was like oh okay. But no he took that initiative, and why even call her Kaitlyn instead of Claire? Because he wanted to hide it.
He either loves you completely or he doesn't. Not I love you more THAN her. Marriage is a life long commitment, in your heart, to the one person. While he may commit to you, where is his heart at?
To those saying she is insecure, she is only insecure because this information was WITH HELD from her. Not because he openly talked about it and tried to reassure her that there is nothing suss about it. She didn't even get that from her fiancé. I personally would leave him or at least seek relationship therapy, change the babies name and take some space from him.