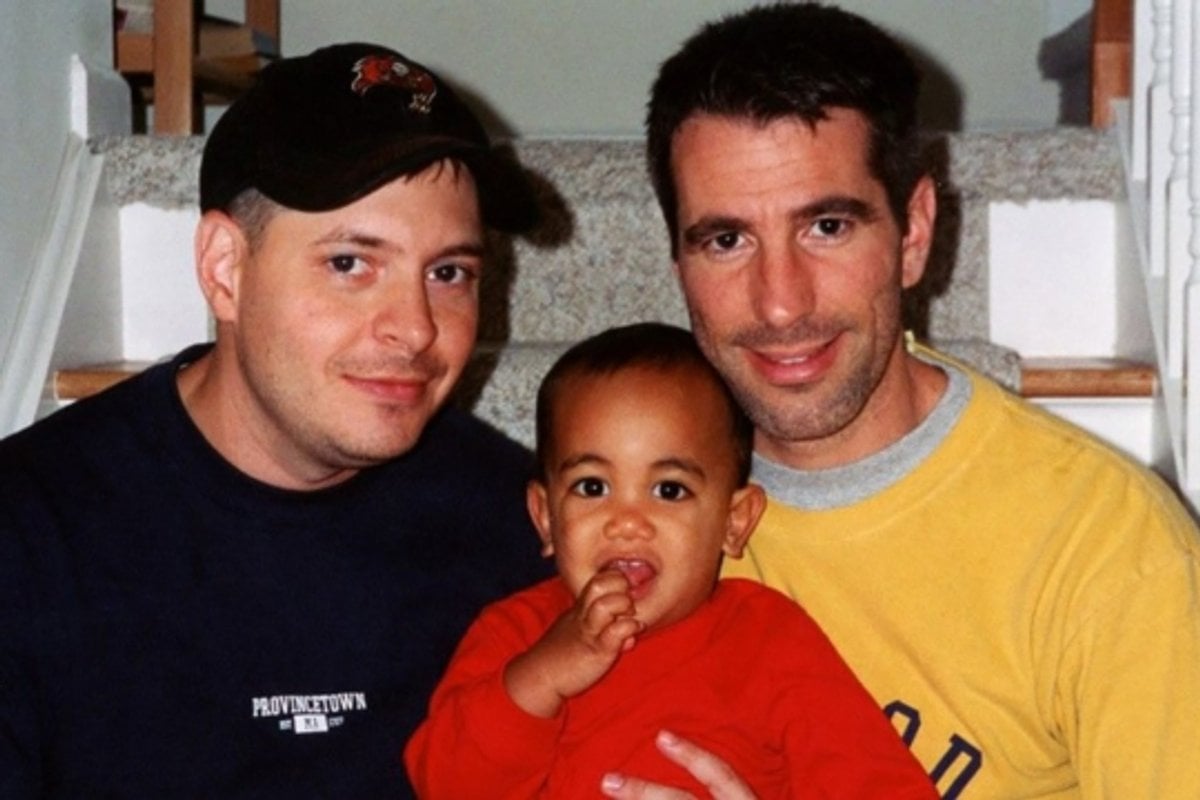 Back in the summer of 2000, Danny Stewart was hurrying through a New York subway station when something on the floor, near a wall, caught his eye.

It looked like a doll. Then the legs moved, and he realised it was a baby. The baby was newborn, with his umbilical cord still partially intact. He was wrapped in a sweatshirt.

Side note: The horoscopes and self-care. Post continues below.

Danny yelled out for someone to call the police, but people just walked by. Eventually he ran up the stairs, found a payphone, dialled 911 and blurted, “I found a baby!”

He ran back to the baby and waited. No one came, so he ran back up the stairs and called his partner, Pete Mercurio. Their apartment was nearby, so Mercurio hurried out to meet him.

Finally, the police arrived. They took a statement from Danny and then took the baby off to St Vincent’s Hospital for a checkup. That was it. Or so Danny thought.

The story made the news the next day. Danny was hailed as a good Samaritan.

A spokesperson for St Vincent’s told The New York Times that the baby was in “good health”, and had probably been born the same day he was found. He weighed 3.2kg, and was described as “Hispanic, with patches of brown hair on the top of his head”.

The baby was given the name Daniel ACE Doe – Daniel, after Stewart, ACE, after the A-C-E station where he was found, and Doe, because his identity was unknown. A search began for the baby’s mother.

Danny, a social worker, and Pete, an aspiring playwright, went back to their lives. They weren’t activists, just a happy couple who had been going out for three years after meeting on a softball field. They’d never talked about having children.

In December 2000, just over three months after the baby was found, Danny was asked to attend a family court hearing.

He told the story of how he had found the baby in the subway station. The judge asked him to stay in the courtroom.

She told him that the baby had been placed in pre-adoptive foster care, but the next thing she said came as a complete shock.

“Would you be interested in adopting this baby?” she asked him.

As a social worker, Danny knew how the system worked, and it wasn’t like this.

"I think everyone in the courtroom, their jaws dropped, everyone was quiet," Danny told NBC 4 New York. "Everyone was looking at me, and I said, 'Yes, but it's not that easy.' And she said, 'Well, it can be.'"

"I saw this opportunity here, this gift to be parents to this child. And how could we not say yes to that opportunity?" Stewart later told CNN. "It seemed like it was divine intervention – it was meant to be."

But Pete didn’t see it that way, and over the next week, the couple had some heated arguments that brought them to the brink of separation.

"We had no money, we had no space, we still had a roommate… I was also a little angry with him, 'How could you say yes, without consulting me first?'" Mercurio told BBC World Service.

"Danny had said at one point, 'I'm going ahead with this whether you're on board or not,' and I just said, 'You're choosing a baby over our relationship?'”

Danny convinced Pete to go with him to the foster parents’ home to see the baby. When they arrived, they found the tiny boy had nappy rash that was so bad it had become infected.

“He was just staring up at me and I was just looking at him, and it was almost like he found a pressure point in my finger that just opened up my heart to my head and showed me in that moment that I could be one of his parents, one of his dads."

Normally, it would have been months before they were allowed to take the baby. But the judge decided it should happen within two days.

Pete called his family to let them know how quickly the baby would be joining their family.

"I said, ‘We're going to name him Kevin,’ and my mum just started bawling, because she had had a baby before me that died on birth, and they were naming that baby Kevin. So this was just sort of a weird way of their baby Kevin coming back to them again as a grandchild from their gay son."

Danny and Pete brought their son home on the subway. Pete remembers the little boy was very guarded at first.

“His eyes were just wide open and his arms were very stiff and tightly crossed across his chest,” he told CNN.

“So we got him in this condition and we thought we just need to love this kid immediately," Stewart added. "So we showered him with love and touch. Didn't take long. He loosened up."

From a young age, Kevin loved being read to. Pete made a book for him, telling the story of how he was found, and it became his favourite. Eventually, Kevin worked out the book was about him.

Danny and Pete took Kevin to the subway station and showed him exactly where he was found. Danny says the young boy took a lot of pride in the spot.

“That's his station. That's his place. This is where we became a family."

When New York legalised same-sex marriage in 2011, Danny and Pete decided they would make their relationship official. They asked 10-year-old Kevin what he thought.

He loved the idea, and suggested that his dads should get married on the same day they’d met. He also suggested that the judge who finalised his adoption should perform the wedding ceremony.

Pete emailed the judge, and two hours later, she replied with a yes.

The wedding, in front of a small number of family and friends, was an emotional occasion.

“We wondered if the judge would remember us after so long, but as soon as Kevin walked into the courtroom, she gave him a hug, asked about his hobbies and friends, and expressed her delight that we were there,” Pete later wrote in The New York Times.

“While Danny and I exchanged our vows, I reflected on the improbable circumstances that had delivered us to that moment: two men, with a son we had never dreamed of, getting married by a woman who enriched our lives more than she would ever know.”

At the age of 12, Kevin was nearly as tall as his dads. He told NBC 4 New York in 2013 that he wondered what his life would have been like if Danny hadn’t found him.

By then, Kevin was already a very active kid, dancing with the National Dance Institute. He and his dads did a lot of outdoor activities, like kayaking, and he started running marathons in his teens.

Kevin is now 20, and is at college, studying maths and computer science. Pete has written a book called Our Subway Baby, and recently gave a copy to his son.

“About a week later he texted us and said, ‘I’m so proud of this book,’” Pete told the New York Post.

Pete and Danny still live near the subway station where Kevin was found.

“When I walk through that subway station, waves of emotion come over me,” Mercurio says. “You always hear anything can happen in New York, and this solidified it for me.”