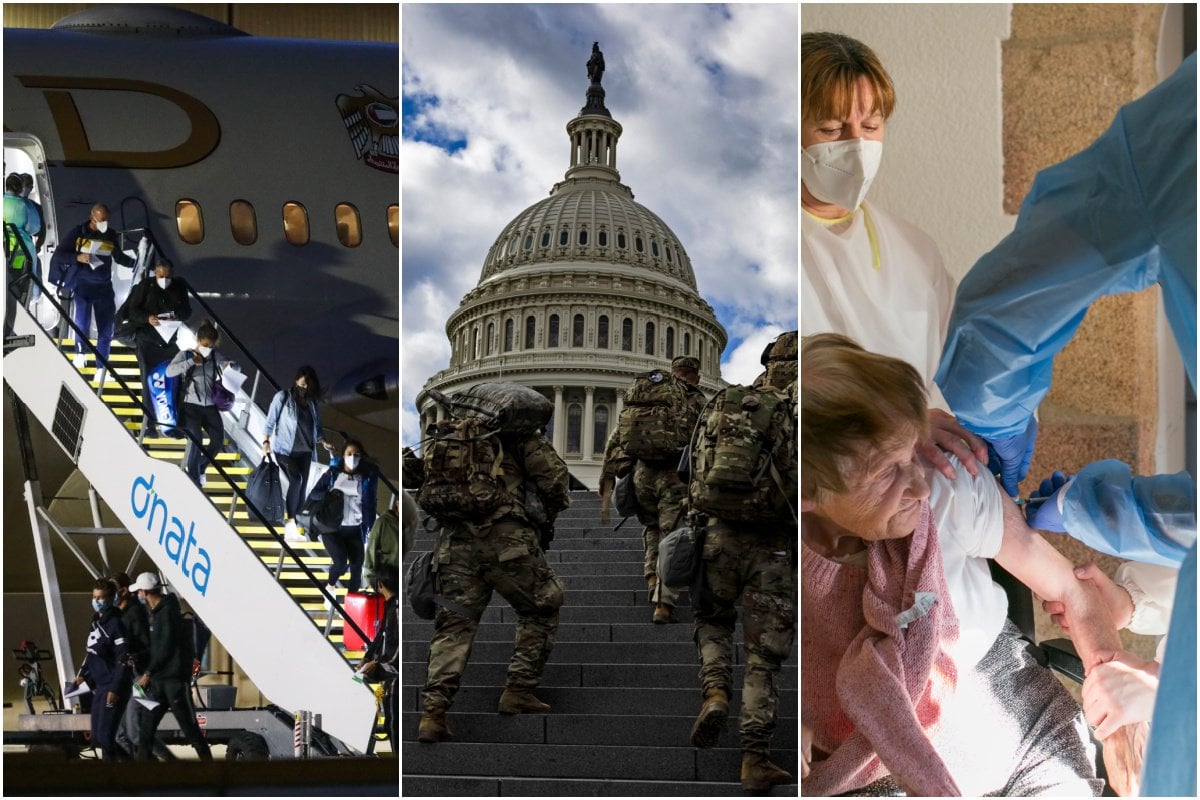 A further 25 Australian Open players have been forced into quarantine on arrival in the country ahead of the season's first tennis major, bringing the total number of competitors now isolating in hotel rooms to 72.

But Australian Open boss Craig Tiley has ruled out delaying the tennis grand slam despite increasing pressure from restive international players furious about being put into hard quarantine.

Some are finding a way to stay ready 🎾

A fifth person, who had flown into Melbourne on an Australian Open charter flight from Doha, tested positive on Sunday night after arriving on Saturday.

It means three Australian Open charter flights have now brought in passengers who later tested positive, with players now confined to their hotel rooms for the next 14 days.

All international players were originally given an exemption to train for up to five hours a day but the test results have forced the three affected flights into stricter quarantine under Victorian government orders, prompting complaints of unfair advantage for the others.

Novak Djokovic has been accused of double standards after reportedly issuing a list of protocol changes to Australian Open boss Craig Tiley.

COVID-19 Quarantine Victoria Commissioner Emma Cassar said that police presence had been increased at the Open hotels and added that there had been cases of "challenging behaviour" from some confined players and support staff. She cited two cases when they opened their doors to have a conversation or shout down the hallway.

Some players in hard lockdown are calling for the February 8 Australian Open start date to be pushed back to ensure they have adequate time to prepare. But Tiley ruled out another date change.

Players have claimed they were told that only those in close contact with a positive case would have to go into hard quarantine, and not all passengers on the flight.

But they are getting little sympathy from many Australians, with thousands of compatriots unable to travel home while many Victorians are currently locked out of the state.

Police brace for pro-Trump protests in US.

Police across the US are guarding state government buildings as they anticipate potentially violent protests by Donald Trump supporters.

More than a dozen states have activated National Guard troops to help secure their capitol buildings following an FBI warning of armed protests ahead of President-elect Joe Biden's inauguration on Wednesday.

Security officials have eyed Sunday as the first major flashpoint, as that is when the anti-government "boogaloo" movement made plans weeks ago to hold rallies in all 50 states. 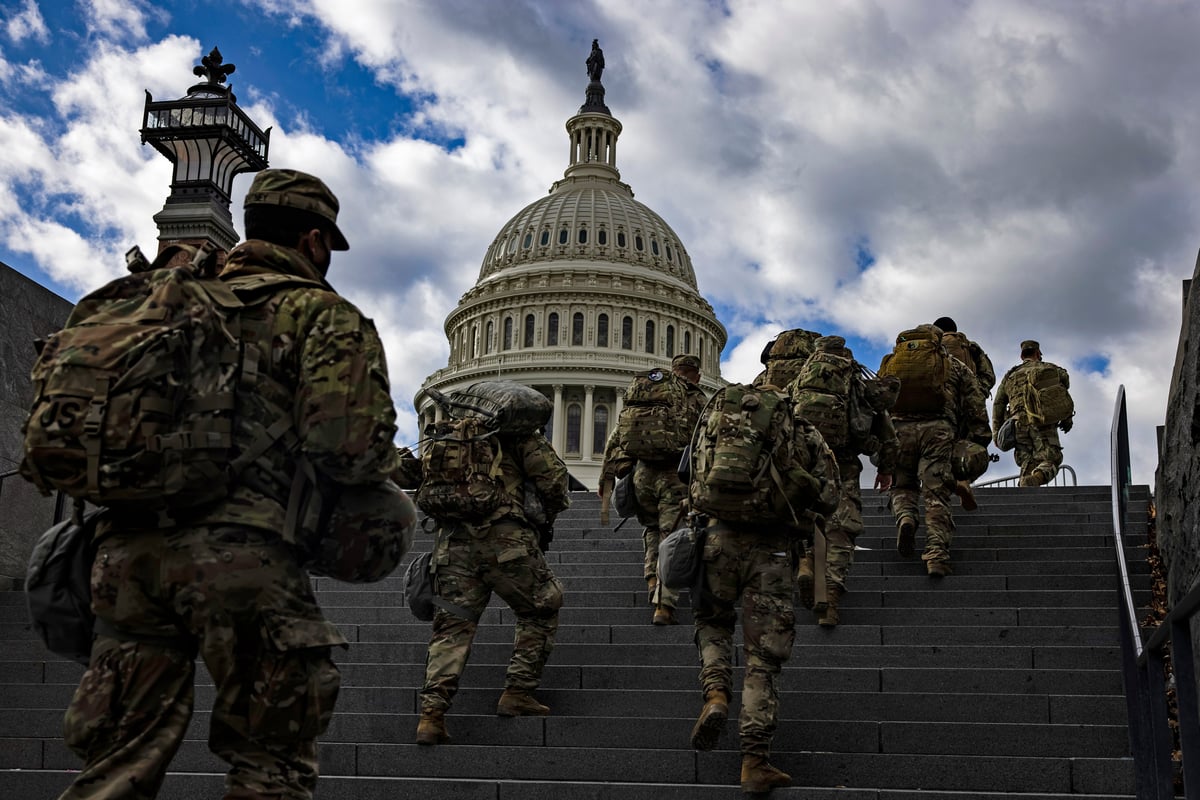 National Guard soldiers head to the east front of the U.S. Capitol on January 17, 2021 in Washington, DC. After last week's riots at the U.S. Capitol Building, the FBI has warned of additional threats in the nation's capital and in all 50 states. Image: Samuel Corum/Getty.

Capitals in battleground states, where Trump has directed his accusations of voter fraud, were on especially high alert.

But by midday, only a few demonstrators had taken to the streets alongside hundreds of law enforcement officers and media personnel.

Four protesters with long rifles stood outside Michigan's capitol in Lansing on Sunday, one wearing a tactical vest and a blue Hawaiian shirt and another wearing a Trump shirt and fatigue pants as he held a "Don't tread on me" flag.

Nearby, crews had blocked off streets and office buildings in Lansing had boarded up their windows in anticipation of potential violence.

The Melbourne father whose children were killed by their mother last week in Tullamarine has been reunited with his wife's parents, a "broken man."

A close friend of the family, Frankie Franjic, told The Herald Sun Tomislav Perinovic, 48, and Katie Perinovic’s parents "cried their hearts out," adding that her parents had accepted the police's version of what had happened to the children.

EXCLUSIVE: A father whose three young children were killed by their mother in a devastating murder-suicide is a “broken man” who "cried his heart out" in an emotional reunion with his wife's parents.https://t.co/wI9aWEQ9do

The 42-year-old was found dead inside the property on Thursday alongside the couple's children Claire, seven, Anna, five, and Matthew, three.

Tomislav was questioned by police after finding the bodies, but was released later that night.

"Homicide Squad investigators have formed the preliminary view that the 42-year-old woman is responsible for all four deaths," Victoria Police said in a statement on Friday.

Franjic said for his friend "This has come totally out of the blue. For Tomislav, everything was normal. There were no warning signs. He loved his wife and three kids."

February vaccine rollout on track for Australia despite Norway deaths.

The federal government is hoping for a swift response to its investigation into Norway's concern over the Pfizer coronavirus vaccine.

A number of elderly and frail Norwegians have had side-effects from the vaccine and 13 have since died.

The Therapeutic Goods Administration and the Department of Foreign Affairs and Trade are investigating these worries with Norwegian authorities.

Norway has registered more deaths among people over the age of 75 who had their first Covid-19 vaccination shot https://t.co/DaMtT3krKj

But Health Minister Greg Hunt says at this stage there is no change to Australia's planned vaccine roll-out, which is due to start next month once approval is given by the TGA.

The Pfizer vaccine forms only part of Australia's response to COVID-19, as there will be a greater use of the AstraZeneca, and home produced, vaccine once it has been approved by the TGA.

A survey by market researcher Roy Morgan of more than 1200 respondents found over three-quarters of Australians say they would be willing to be vaccinated when it becomes publicly available.

Six NSW COVID cases all linked to a source.

NSW has recorded six new locally acquired cases of COVID-19 but Premier Gladys Berejiklian says it is high time Victoria reopened its border with the state.

Five of the six cases were household contacts of the western Sydney man reported on Saturday while investigations continue into the source of his infection.

NSW Health believes it is likely to be linked to the Berala bottle shop cluster.

The sixth case is a Concord Repatriation General Hospital staff member who worked in the cardiology and radiology wards and may have been infectious on January 12, 13, and 14.

NSW Health is treating 100 COVID-19 cases, one of whom is in intensive care. Most cases (98 per cent) are being treated in non-acute, out-of-hospital care, including returned travellers in the Special Health Accommodation.

The person wore a face mask during each shift and had minimal contact with patients.

On Sunday Premier Gladys Berejiklian said Victoria's Premier Daniel Andrews had not made contact about the state's hard border and reiterated her misgivings about the controversial move.

Victoria has gone 11 straight days without a new local coronavirus infection and residents stuck in the Brisbane area are now free to travel back to the state.

Melbourne workers are expected to return to city offices in droves on Monday, with new research showing most feel safe and ready after being home-bound for nine months.

Private workplaces in Victoria are able to return to 50 per cent capacity from Monday, with public service offices permitted to ramp up to 25 per cent.

Mask rules in Victoria will revert to Christmas settings at midnight on Sunday, as the state welcomes back 50 per cent of private sector office workers from Monday.

Nearly 60 per cent of people surveyed wanted to return to the workplace for improved health and wellbeing, while 53 per cent were motivated by the improved productivity of the office environment.

The survey, commissioned on behalf of the City of Melbourne, found only 10 per cent of respondents were not willing to return to the office at all.

Western Australia will reopen its borders to Victoria at 12.01am on Monday, meaning travellers will no longer require an exemption to enter the state. But they will still need to self-isolate for 14 days.

Far north Queensland residents are bunkering down, with a tropical cyclone expected to bring destructive winds and heavy rain when it makes landfall.

The Bureau of Meteorology on Sunday declared tropical cyclone Kimi had quickly developed about 200km north to northeast of Cooktown.

The category one system is forecast to cross the state's north coast on Tuesday as a category two system.

Kimi is tipped to lash an area from Cooktown to Innisfail with destructive winds up to 130km/h.

Rainfall totals of 100 to 300mm are likely near and to the south of the cyclone's path, although isolated falls could exceed that.

The former Archbishop of Adelaide, Phillip Wilson, who was convicted but later acquitted on charges of covering up child sex abuse in NSW, has died aged 70.

He had suffered a series of health issues in recent years, including cancer, but his death was unexpected, the Catholic Archdiocese of Adelaide said on Sunday.

Wilson was in 2018 convicted of covering up the crimes of pedophile priest James Fletcher, who was found guilty of sexual abuse committed in the NSW Hunter region in the 1970s.

At Wilson's trial, prosecutors argued that two altar boys had in 1976 told Wilson that they'd been abused by Fletcher but he had done nothing.

Wilson was sentenced to a year of home detention but he appealed the case and won. A District Court judge then quashed the conviction.

- The US presidential inauguration will happen outdoors on Wednesday despite ongoing security threats, according to two aides to Joe Biden.

- Record producer Phil Spector, who changed the sound of pop music in the 1960s and was convicted of murdering Hollywood actress Lana Clarkson, has died aged 83.

- Russian Opposition leader Alexei Navalny has been arrested at an airport outside Moscow upon returning home for the first time since his attempted assassination.

- The death toll from tribal violence between Arabs and non-Arabs in Sudan has risen to 83, including women and children.