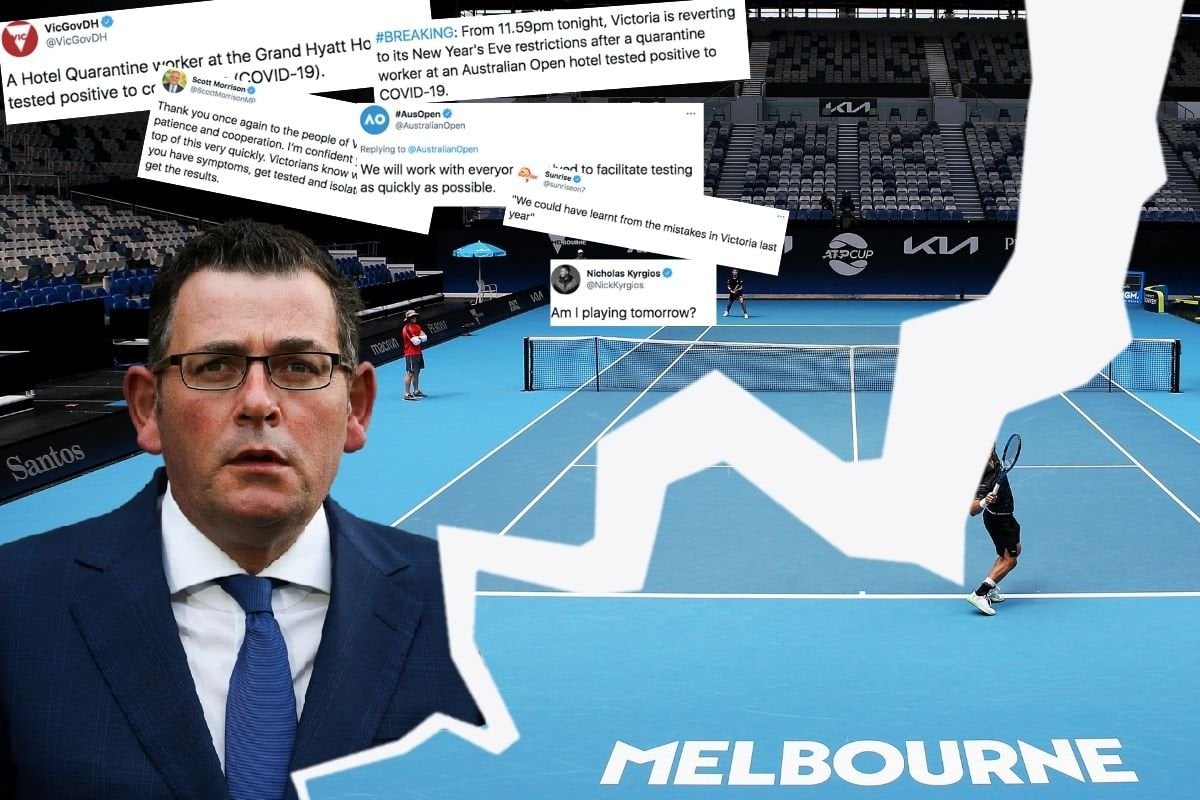 We've learnt time and time again that this virus is not to be messed with.

That's why we locked down our international borders. That's why our premiers have been so strict about state borders. That's why thousands of Australians missed Christmas with their family. Why Victorians spent 112 days inside their homes. Why our economy suffered. Why hardworking business owners were forced to shut their doors forever. Why we homeschooled for months.

It was all to get on top of this virus and to give us the chance to live a somewhat 'normal' life as we wait for a vaccine and for this nightmare to be over.

WATCH: A 2020 Zoom call from the future. Post continues after video.

But in 2021, the Victorian government decided to take a gamble. After all that hard work, they opened their border to 1200 tennis players, coaches and support staff who entered our some-what safe haven from all over the world to compete in the Australian Open this month.

The Victorian Premier says the Australian Open is actually helping to fund the state's plans to allow more travellers to return home to Australia, and the prime minister adamantly told 2GB in January that, "No one is being prevented from coming home from overseas because of the Australian Open. That’s not happening."

But try telling that to the Australian citizens getting flight after flight home cancelled. It's a cruel comparison.

So my parents have had their flight cancelled. Again. Meaning they won’t see their 1st grandchild before his 1st birthday. Yet we are meant to care one iota about the situation professional tennis players coming to the #AustralianOpen currently find themselves in? Come off it.

Sure. The benefits are clear.

Last year, the Australian Open generated $387.7 million for Victoria. And for a state which suffered more than any in this country in 2020, that's a lot of coin.

But that figure isn't going to do much in the grand scheme of things, considering the state suffered an economic hit to the tune of $104 billion last year in the City of Melbourne alone.

Money aside, pushing forward with this hypocritical decision is doing far more damage than good. In more ways than one.

There are still more than 37,000 Australians stranded overseas and unable to get home, with 4800 of those classed as "vulnerable".

On a more local level, in January the Victorian government was happily letting in COVID-19 positive Australian Open visitors, while having regulations still in place that stopped their own citizens from entering from neighbouring NSW and QLD.

Opposition Leader Michael O'Brien: "For Daniel Andrews to prioritize bringing tennis players from COVID hotspot countries to Australia, rather than bringing home Victorians who are stuck interstate - it's worse than a double fault, it's a double standard".

It's worth mentioning that the Open isn't the first international sporting event to be held on our shores during the pandemic.

In October, Sydney welcomed the Argentinian rugby team for the Tri Nations, and the following month the Indian cricket team touched down for a two-month tour.

They were similarly risky and hard to swallow moves, however, the incoming teams were much smaller and were able to quarantine and train as one - greatly reducing the risk they posed to the wider NSW community. The NSW Premier has also never been quite as cutthroat with state borders, or with lockdown rules. The hypocrisy didn't cut quite so deep.

Victorians, on the other hand, have sacrificed a lot. By allowing Open competitors in from all over the world while saying 'no' to Victorians just wanting to come home from Sydney, they have disrespected the trust and the obedience of a state that worked so hard for freedom.

Then the inevitable happened. Positive tests started to be linked back to Australian Open charter flights from Abu Dhabi, Doha, Qatar and Los Angeles.

Everyone affected was in hotel quarantine - including the very disgruntled athletes who thought they were going to be able to at least train in 'bubbles'. But that didn't eliminate the risk entirely.

Hotel quarantine is to blame for Victoria's hard lockdown from June to November. It only takes one case. One slip up. One ungloved meal to take us back there again.

Which is exactly what has happened.

A quarantine hotel worker has on Wednesday, February 3, tested positive to COVID-19 breaking 27 days of no community transmission for the state. It's been confirmed he possibly contracted it from an international tennis player.

Health Authorities have advised us that a Hotel Quarantine worker has tested positive for COVID-19.

Those associated with the AO who quarantined at the hotel now need to be tested and isolate until they receive a negative test result.

The 26-year-old man visited numerous public places and shops before returning a positive test on Wednesday with the state now forced back into mask wearing, exposure site monitoring and gathering limits.

Up to 600 Australian Open tennis players and officials are being forced to isolate until they receive a negative result, with the Open just four days away from starting.

Opposition Leader Michael O’Brien has called on the Victorian government to make a call on whether to cancel the Australian Open within 48 hours with concern the event cannot be guaranteed to go ahead.

Once again, Victorians are faced with the very real possibility that their state could very quickly slip into another COVID-19 disaster. Another harsh lockdown.

Victorians want their economy back, but right now there are plenty who want their freedom more. Their mental health demands it. They were told time and time again that "health was more important than money" as weeks of lockdown dragged into months. But in 2021 their government is showing them the opposite is in fact true.

To really dig the heel in, Victorians have been forced to spend the past few weeks enduring the complaints of international tennis players upset about the "unfair" conditions of their "hard lockdown".

Right now, it's hard to comprehend how the benefits of hosting the Open, are outweighing the risks and the uproar.

I’m genuinely interested in seeing the Australian Open risk assessment framework; the threat’s clear (a global pandemic), the risk is obvious (international arrivals will reintroduce COVID) - what were the treatments, residual risk levels and, most importantly, the risk appetite?

I mean, really, who* knew changing the rules for thousands of people travelling in to Australia from different parts of the world for the Australian Open would result in multiple cases of COVID-19 being imported into Australia?!!!

*All of us. We literally ALL knew.

I myself lived in Melbourne for five weeks over the Christmas break and while I've come across a few excited about the prospect of attending an international tennis game this month, the majority just feel cheated, disrespected and annoyed.

What did the government - both Victorian and federal -  think was going to happen when we agreed to host the Australian Open?

This virus doesn't play by the rules.

On what planet was inviting athletes from around the world into our most COVID devastated state ever going to run smoothly?

What do you think about the Australian Open going ahead in Melbourne this year? Let us know in the comments below.

Reply
Upvote
If we expect zero transmission from quarantine it will always ‘fail’. For that to work we would need to put every traveller in a completely sealed room with an external chamber, like they have in spaceships and infectious disease labs.
We can either have people entering the country and have these moments where things are halted for contact tracing to occur, or we can shut the borders completely. We cannot keep borders open without accepting the risk of disruption.
D
dee a year ago

Reply
Upvote
Allowing some form of normality after Dan's ridiculous 4 month 2020 lock down is the very first thing which he has done which I actually agree with.
We need to get used to living with this virus as it will never disappear,  even with the vaccine. A cluster of cases is to be expected and is not the end of the world. Talk about panic and doom and gloom talk!
A
anonymous a year ago