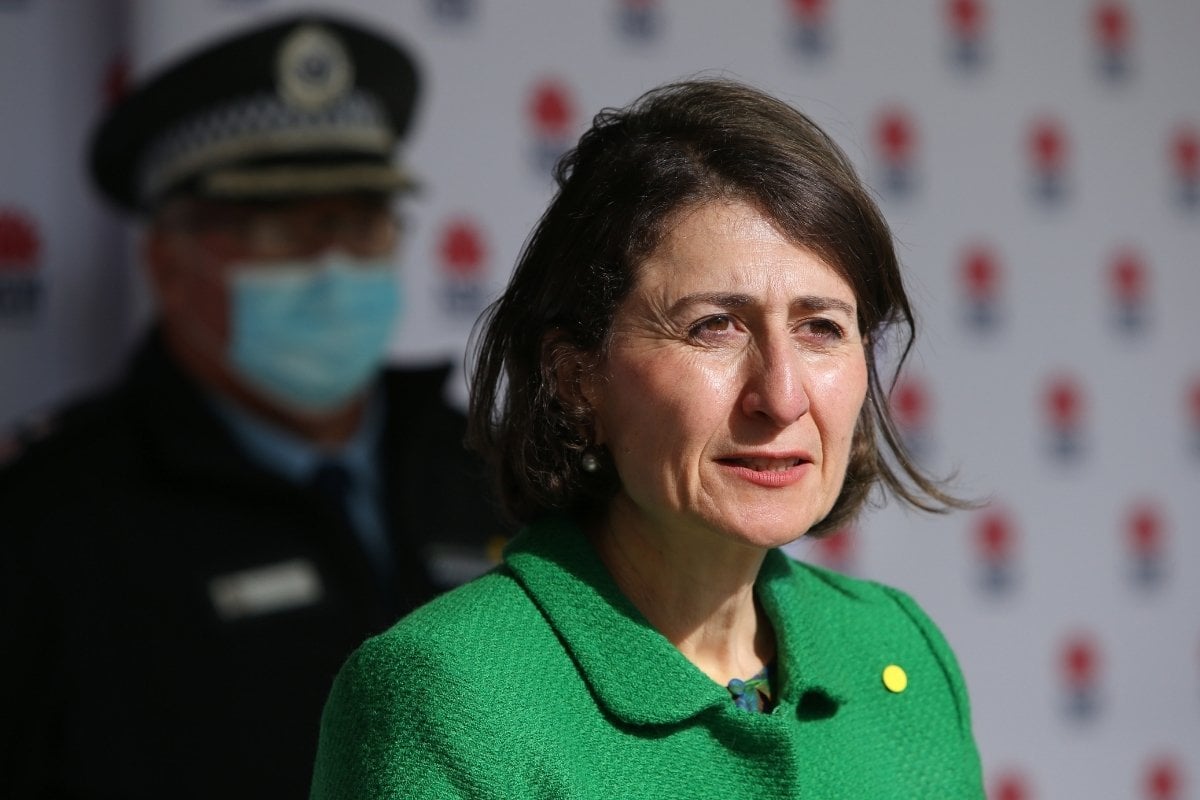 The state's premier, Gladys Berejiklian, said while the majority were in isolation, 11 were out in the community while infectious — a number she described as "too high".

"I want to say in the strongest possible terms, please, please avoid contact with other households, please avoid visiting family and friends because you are not allowed to," the Premier told Thursday's press conference.

Chief health officer Kerry Chant said 40 cases were in hospital, including 17 people aged under 55 and 10 under 35 years.

Eleven people are in ICU, including one person in their 30s, and three people are being ventilated.

NSW authorities yesterday extended Sydney's lockdown by a further week in an effort to control the cluster. Greater Sydney, including the Blue Mountains, Central Coast, Wollongong and Shellharbour local government areas, will remain under stay-at-home orders until 11:59pm on Friday 16 July 2021.

Mills and four-time Olympic swimmer Cate Campbell will carry the nation's flag at the July 23 ceremony to open the Tokyo Games.

Mills says it's difficult to digest the enormity of the honour.

"It's obviously an absolute honour and a privilege and it's so iconic that it's going to be hard for me to wrap my head around this moment," Mills told reporters.

"It's about identity, it's about being proud of who you are and really showing that and being passionate about that."

Mills said there had been no discussions about also carrying the Aboriginal flag at the ceremony, but he would take one to Tokyo.

Campbell is the first female swimmer to carry the flag at an Olympic opening ceremony.

"Honour and privilege have been thrown around a lot ... I wish that the English language had a few other words that could fully express just the real sentiment and emotions that I am feeling right now," she told reporters.

"It has absolutely blown me away ... honour and privilege will have to do in lieu of something else."

For the first time, the International Olympic Committee has decreed that a male and female carry the flag of each nation at the ceremony.

After three attempts, Sibylle Von Linde made it to Australia from Germany and hopes to see her terminally ill mother before it's too late.

The past two weeks locked up in quarantine at the Howard Springs quarantine facility in the Northern Territory have been gut-wrenching as her mother's condition is rapidly deteriorating.

"The worst thing is it's two weeks and I'm here and can't be with her."

Ms Von Linde is due to leave quarantine on Thursday and will travel to the Central Coast to be with her mother Irmi.

"I applied twice and said my mum has cancer, but apparently it wasn't enough to say 'it's really bad'.

"I had to have it in writing that she has only a couple of weeks."

Three weeks ago Irmi could still walk, but ten days ago she had to get a wheelchair. Now she can barely sit in it.

Her partner couldn't travel with her from Munich because of the cost, which included $2500 for quarantine, and Australia's travel ban, so Ms Von Linde is alone.

Others at the Centre for National Resilience in Howard Springs have started an online petition calling for a more humane quarantine system.

The final attempt to enter Australia was approved, but her request to do home quarantine with Irmi was declined.

"It's been tough," she said. "I hope my story helps someone after me, that's enough."

Queensland has recorded one new locally-acquired case of COVID-19 as government hopes grow that the state's five outbreaks are under control.

Premier Annastacia Palaszczuk says the new infection in Tarragindi, in Brisbane's south, is a contact of a known case and was already in home quarantine.

She says the case emerged after 16,336 tests across the state in the 24-hours to 9am on Wednesday.

Ten Queensland healthcare workers are in quarantine after racing to save the life of a COVID-positive patient in hospital. #9Today pic.twitter.com/YbUF0Lpiw1

Chief Health Officer Jeannette Young said the person who tested positive has the Alpha variant, was asymptomatic and had been in home quarantine during their entire infectious period.

10 Queensland healthcare workers are in quarantine after racing to save the life of a COVID-positive patient who suffered an anaphylactic shock on their way to get a medical scan. In saving the person's life the staff had no time to put on their own PPE.

Meanwhile, federal Home Affairs Minister Karen Andrews lashed out at the premier over her planned trip to Tokyo to present the Brisbane 2032 Olympic bid to the International Olympic Committee.

More than 64,000 people have now signed a petition calling for Ms Palaszczuk to be denied a travel exemption after she successfully lobbied the federal government to halve international arrivals at last Friday's national cabinet.

"It's the absolute hypocrisy that is really getting right up the nose with Queenslanders at the moment," she told 4BC Radio.

A teacher who engaged in sexual acts during and between classes with a 14-year-old student has been jailed for at least two years and five months.

Monica Elizabeth Young was 23 when she first began messaging the teenager on Snapchat during Sydney's first coronavirus lockdown.

When his geography classes resumed, the boy acceded to Young's dare to hug him, District Court Judge Kate Traill said on Wednesday.

She was sending the boy nude photos within days, then organising meetings on school grounds.

In a classroom during a lunch break, she said he "didn't have the balls" to engage in digital sexual intercourse and, after sexual contact occurred, she kissed the boy on the lips.

Sexual acts also occurred during a movie screening with other students nearby, one afternoon on a staircase and in a public carpark.

Young pleaded guilty to three counts of aggravated sexual intercourse with a child and admitted other sexual crimes related to sexual touching and inciting sexual contact with a minor.

In a sentence hearing in June, she spoke of her regret and apologised for breaching the boy's trust.

"I studied for four years ... to guide young people ... but the lines got blurred," the now-registered sex offender said.

The judge found she was unlikely to reoffend and had special circumstances warranting a reduction in non-parole period.

Backdated 36 days to include time on remand, Young will be eligible for parole on November 1, 2023.

Australia under pressure over criminal age.

Australia's human rights record will again come under pressure as it responds to international calls to raise the age of criminal responsibility to 14.

The government is set to front the United Nations Human Rights Council in Geneva on Thursday night.

More than 30 UN member states have called for Australia to lift the age at which children can be arrested, detained and charged from 10.

No child belongs in prison.

Raising the age of criminal responsibility to at least 14 would have an immediate and generational impact on the over-incarceration of First Nations children in Australia. #RaiseTheAge https://t.co/ESvKtNVRJJ

"Failing to respect people's rights is not only morally wrong and a breach of international law but goes against our national interest," he said.

The UN reviewed Australia's record on the age of criminal responsibility in January.

Its approach to climate change along with treatment of Indigenous people and asylum seekers also came under the spotlight.

Thursday is Australia's chance to formally respond and say whether it accepts the review's recommendations.

For more on this topic; listen to The Quicky. Post continues after podcast.

Haitian President Jovenel Moise has been assassinated in an attack on his private residence, with the Caribbean nation's interim prime minister calling the killing a "hateful, inhumane and barbaric act."

First Lady Martine Moise was shot in the overnight attack and hospitalised, interim Premier Claude Joseph said in a statement on Wednesday.

Even before the assassination, Haiti had grown increasingly unstable and disgruntled under Moise.

"I condemn in the strongest terms the assassination of President Jovenel Moïse of the Republic of Haiti."

-- @antonioguterres says the UN will continue to stand with the Government and the people of Haiti.https://t.co/PzuHRiH9xH

The president ruled by decree for more than two years after the country failed to hold elections and the opposition demanded he step down in recent months.

"The country's security situation is under the control of the National Police of Haiti and the Armed Forces of Haiti," Joseph said in a statement from his office.

"Democracy and the republic will win."

- Roger Federer's dream of a ninth Wimbledon title has been crushed by Poland's Hubert Hurkacz in the quarter-final.

- Japan is considering banning all spectators from the Olympics with authorities expected to declare a state of emergency for Tokyo to contain coronavirus infections 16 days before the Games begin.

Like a $50 gift voucher for your thoughts on vitamins & supplements? Take our quick survey

Reply
Upvote
Those health care workers in Queensland who put themselves in danger to save the patient need to be retrained. It is a difficult concept to get used to but from the very start we have all been trained that there is no emergency in a pandemic.  The first letter in the BLS algorithm is D for Danger, in this case these 10 workers didn't manage to stick to that algorithm by directly putting themselves in danger.
News
General
Opinion
True Crime
Politics
Sport
Explainer
Entertainment
Celebrity
Reality TV
Movies
TV
Books
Rogue
Royal
Lifestyle
Beauty
Fashion
Weddings
Home
Wellness
Health
Fitness
Travel
Food
Parents
Before The Bump
Pregnancy
Baby
Kids
Teens
School
Parent Opinion
Work & Money
Money
Finance
Career
Lady Startup
Relationships
Sex
Dating
Separation
Friendship
Family
Real Life
Couples