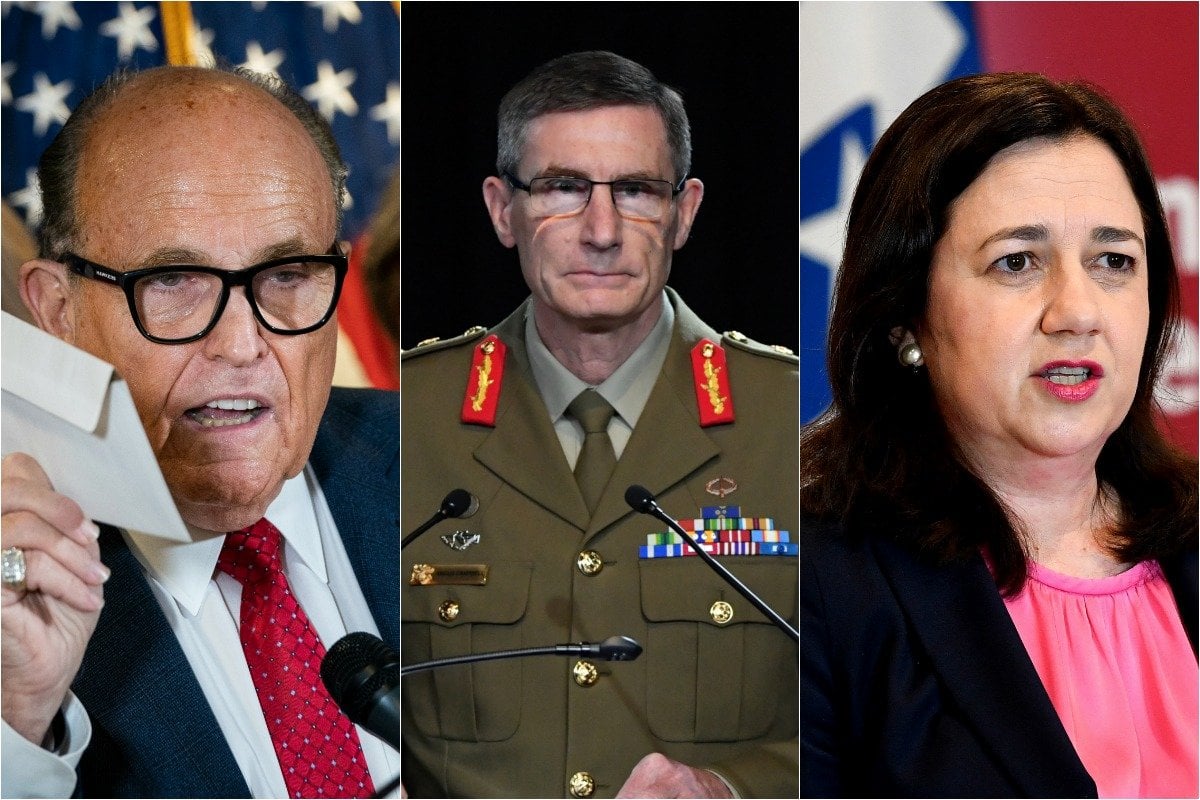 South Australia will emerge from their hard lockdown at midnight on Saturday after a person closely linked to a COVID-19 outbreak in Adelaide lied to contact tracers.

Speaking to media, South Australia Premier Steven Marshall said investigations had revealed one of the closed contacts linked to a positive case in a worker at an Adelaide pizza bar misled the contract tracing team.

The person had told authorities that they had only purchased a pizza from the shop when in fact they had worked several shifts at the location.

#BREAKING: Effective as of midnight on Saturday, South Australia’s stay at home order will be repealed.

Effective immediately, outdoor exercise within family groups will be allowed.

"Their story didn't add up. We pursued them. We now know that they lied," Marshall said.

"I stress this point, that this is still a very dangerous cluster and our expert healths remain extremely concerned. We are still trying to locate thousands of people who may have had dangerous contact at the Woodville Pizza Bar," he continued.

"To say I am fuming about the actions of this individual is an absolute understatement.

"This selfish actions of this individual have put our whole state in a very difficult situation. His actions have affected businesses, individuals, family groups and is completely and utterly unacceptable."

As for the state's other restrictions, schools and gyms will reopen, while private gatherings will be restricted to 10 people in private residences and 50 people outdoors.

Restaurants will reopen with a limit of 100 people on hospitality premises with table bookings limited to 10 people and seated consumption required at all venues.

"The lie was the person claimed that they had purchased a pizza from the pizza shop, where in fact they were working there and had been working there for several shifts," the Commissioner said.

"That clearly changes the circumstances and had this person been truthful to the contact tracing teams, we would not have gone into a six-day lockdown."

Young soldiers were "blooded" by shooting prisoners, and fleeing women and children were considered legitimate targets, a damning inquiry into Australia's Afghanistan operations has found.

A four-year investigation by Inspector-General of the Australian Defence Force, Paul Brereton, examined allegations of war crimes by special forces in Afghanistan.

Having interviewed more than 400 witnesses and examined tens of thousands of documents, Justice Brereton found there was credible evidence of 23 incidents in which a total of 39 Afghan nationals were unlawfully killed.

#BREAKING: An inquiry into the alleged conduct of Australian troops in Afghanistan has found war crimes were committed by serving personnel with 39 non-combatants allegedly killed by 25 current or former members. https://t.co/R7BrZiXAOC

Australian Defence Force Chief Angus Campbell issued an apology to Afghanistan after releasing the report on Thursday, announcing that the families of those killed, mostly between 2009 and 2013, will be compensated without waiting for any criminal prosecutions.

A few of the Afghan nationals killed were not participating in hostilities, while the majority were prisoners of war.

This is a sad day for Australia.

I know Australians will be distressed by this report. I am too. This is not who we are.

And as the Chief of the Defence Force said this morning: "We are all diminished by it." https://t.co/Nn3ZN9voq6

Justice Brereton found credible evidence some soldiers carried "throw downs" such as weapons and military equipment to make it appear the person killed was a legitimate target.

Justice Brereton placed the greatest blame on patrol commanders, believing they were most responsible for inciting or directing subordinates to commit war crimes.

Most Australians plan to get virus vaccine.

Most Australians plan to get vaccinated against the coronavirus once it's available, but new surveys also show hesitancy in the community.

Australian National University analysis released on Friday shows close to three-in-five people would get the jab, while six per cent definitely won't and another seven per cent probably won't.

The survey of 3000 adults in August found females, people living in disadvantaged areas, those with more populist views and stronger religious beliefs were more likely to be hesitant to get vaccinated.

Oxford coronavirus vaccine shows "encouraging" immune response from people in their 60s and 70s in trial results, raising hopes it can protect those most at risk of illness from virushttps://t.co/XsgTrU6LNW

A separate survey of 1000 Australians found the same amount - six per cent - wouldn't get the vaccine.

The Dynata data also shows one in three would get the vaccine immediately after it's available while the same number would wait to speak to their doctor and only take it if recommended.

The government's goal is to have all Australians who choose to be vaccinated to have the jab by the end of next year.

Coroner Jacqui Hawkins has made nine recommendations aimed at preventing a repeat of James Gargasoulas' attack that killed six people and injured 27 others on January 20, 2017.

These include a review of police approaches to bail for high-risk and repeat offenders, the recording of after-hours hearings with bail justices and better training for officers.

An inquest found systematic failures by police contributed to the perfect storm that allowed Gargasoulas to manipulate the situation.

Police attempts to try and stop James Gargasoulas from murdering six people and injuring 27 others along Melbourne’s Bourke St Mall never had a chance of succeeding. #7NEWS https://t.co/lbRz2N1S5B

"It is agonising that despite the escalating events of the previous days and the scores of police members actively engaged in attempting to stop him, such a violent, drug-fuelled, psychotic and delusional perpetrator was able to slip through the cracks," Ms Hawkins said.

The killer was arrested and then released on bail six days before using a stolen car to run down lunchtime crowds along the CBD's Bourke Street Mall.

Jess Mudie, 22, 25-year-old Yosuke Kanno, Matthew Si and Bhavita Patel, both 33, were among the murdered.

Trump's lawyer insists they have evidence to flip election result.

President Donald Trump's lawyer is continuing to insist they have enough evidence of voter fraud to overturn the US election result.

Rudy Giuliani says it's impossible for Joe Biden to have pulled ahead in the key battleground states of Michigan and Pennsylvania when the president was in front on election night.

Rudy Giuliani is alleging a widespread plan across Democrat run cities, to execute voter fraud. He’s also attacking the press for an “irrational, pathological hatred of the President” @TheTodayShow @9NewsAUS

"We cannot allow these crooks, because that's what they are, to steal an election from the American people. They elected Donald Trump. They didn't elect Joe Biden," Mr Giuliani said.

To date, the Trump campaign has presented no evidence of to back its accusations of mass voting fraud in the election.

WATCH: @FoxNews White House reporter calls @RudyGiuliani's press conference "light on facts" and "So much of what he said was not true" pic.twitter.com/uackOenTCi

Victoria has shut its border to South Australia as it embarks on a COVID-19 testing blitz in two regional towns.

The "hard border" with virus-hit SA came into effect just before midnight on Thursday and will remain in place until Sunday when a permit system is implemented.

The 48-hour shutdown was prompted by the unexpected detection of virus fragments in wastewater at Benalla and Portland, both along freight corridors, and Adelaide's growing cluster which has sparked a six-day "circuit-breaker" lockdown.

From 11:59pm Thursday 19 November, a ‘hard border’ will be in place for 48 hours before a permit system comes into effect from 11:59pm Saturday 21 November. #COVID19Vic pic.twitter.com/ZieDg18vxV

More than 300 police will patrol the Victorian side of the South Australian border, from Mildura down to Portland. It's the first time Victoria has shut its border to any state during the pandemic.

As the state recorded its 20th day without a coronavirus case or death, Mr Andrews said the closure would not impact plans to further ease restrictions on Monday.

Borders between New South Wales and Victoria will open at 12.01 pm on Monday after five months of closures.

The Queensland premier says she doesn't think it's a "bad idea" to change the lyrics of the Australian national anthem to be inclusive of the nation's indigenous history.

Asked Thursday if she would get behind a call to change the anthem so it says "we are one and free" instead of "young and free', Annastacia Palaszczuk said she did not have a problem with the idea.

Queensland Premier Annastacia Palaszczuk has backed calls to change the lyrics of the national anthem to "acknowledge our proud Indigenous history". #9Today pic.twitter.com/IIdMm3Yfbf

The change was floated by NSW Premier Gladys Berejiklian last week during NAIDOC week - an annual celebration of Indigenous culture.

A courtroom battle between the wives of former England football stars Wayne Rooney and Jamie Vardy has kicked off in London, an escalation in a tale of betrayal and amateur detective work that has titillated the British public.

Rebekah Vardy is suing her former friend Coleen Rooney for libel after Rooney accused her on Twitter and Instagram of leaking stories from her private life to the Sun tabloid newspaper. Vardy denies the leaks.

Both women belong to a group of footballers' wives and girlfriends, known in Britain as the WAGs, who have become celebrities in their own right, their lives regularly dissected by the tabloid press.

The much-publicised libel battle between Rebekah Vardy and Coleen Rooney which immediately earned the tagline 'Wagatha Christie' will play out in the High Court for the first time today#WagathaChristie https://t.co/Svduv4sX6m

The pair's feud exploded into public view in October 2019, when Rooney posted a message explaining that she had become suspicious of one of her friends and had carefully planned and executed a sting operation.

Rooney said she had blocked all her friends from viewing her private Instagram account, except for the one she suspected, and had then posted fake stories over five months, which had found their way into the Sun.

The story was dubbed the "WAGatha Christie" case, in reference to the renowned author of detective novels.

READ: "She did it." A third WAG has weighed in on the Coleen Rooney and Rebekah Vardy feud.

Brexit talks called off due to virus case.

Brexit talks between the United Kingdom and the European Union have been paused after one of the negotiators tested positive for the coronavirus.

EU chief negotiator Michel Barnier announced with the UK's chief Brexit negotiator David Frost on Thursday that the talks had been suspended after the diagnosis.

An EU official said on Monday it would be the last chance to hammer out a trade deal with officials in London before the UK leaves the single market in January.

Brexit talks have been suspended after an EU negotiator tested positive, Michel Barnier has confirmedhttps://t.co/TdSaO3EQKB

If a deal is not struck before the end of the deadline, tariffs and other trade barriers will be imposed, which could wreak havoc on businesses and supply chains.

Officials in Brussels and London have been racing against the clock to wrap up a deal but negotiations have yielded meagre progress.

- Harvey Weinstein has not contracted the coronavirus while in prison but does have a high fever and is being monitored for a number of other health issues.