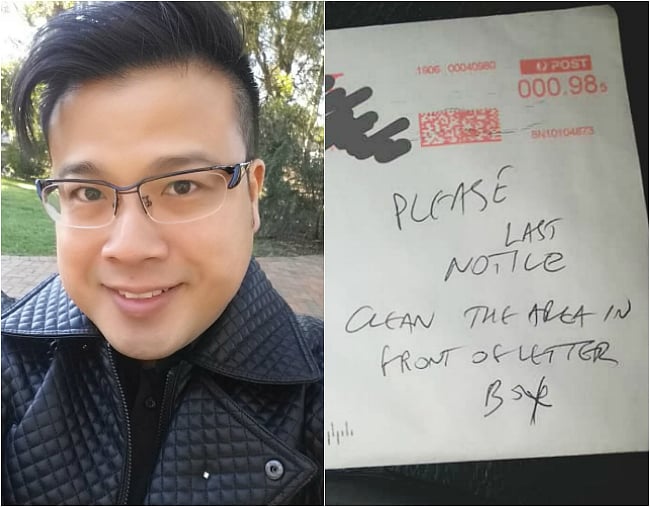 Johnson Ong never knew his letterbox could become so controversial. But alas, the Melbourne resident has found himself in the midst of a bizarre stand-off with his postie (and some opinionated Facebook users) over precisely that.

While collecting his mail roughly a month ago, the Singapore-born man found a note scrawled in pen on the front of one of his envelopes. “Clean the area in front of your letterbox.”

Baffled, as his garden had remained unchanged – and unremarked – for 12 years, Ong obliged and cleared a select patch. But the messages kept coming.

“You need to clean the area in front of the letterbox. Not a small part,” the scribble read. “I have to ride through. There are rocks. All the front yard.”

Then an ultimatum: “Good morning. I won’t be delivering anymore if front of yard is not clear 1m in front and 1m side of letterbox. Thank you.”

Ong has shared photographs of the notes to a (rather well populated) Facebook page called Australia Post Complaints, raising his dissatisfaction that the postie had demanded he "make way for him to ride across the nature strips for his convenience".

"Riding over nature strips in wet weather is not safe as it could be slippery, mud can get into his wheels, spreading to neighbours’ driveways,” he wrote. “Encouraging all riders or drivers to use [the] driveway is the safest for themselves and others.”

But as an Australia Post representative noted in response to Ong's complaint (according to screenshots of their exchange), letterboxes must be clearly visible and accessible, free of obstacles like trees, shrubs and rocks. Delivery guidelines also state that a postie must be able to place mail in a letter box with having to dismount their motorcycle.

“Looking at the photo of your mailbox, the area around it is not clear,” a customer service representative wrote to Ong.

“I apologise if you think the driver is threatening you, however they are entitled to ride across nature strips. This is to ensure safe, accurate and fast deliveries.”

Followers of the Australia Post Complaints account (which is not at all official, by the way) were divided on the issue.

“You want your mail delivered, make sure it is a safe place for the postie,” one commenter wrote. “After all it is his workplace and he deserves safety!”

"My kid could ride his tricycle safely over that," wrote another. "Is your postie that frail?"

"Should he really be writing on your mail?" questioned another. "Leave a note..."

Ulatimately, Johnson agreed the safety of the rider was the most important conclusion to his suburban saga.

"I will do my best to make sure postie are safe when they are delivering [sic]," he wrote.

I letterbox flyers and I hate the ones with the stiff flaps that snap shut. Feel sorry for the posties there.

Mine is in a much worse situation and there is nothing I can do to improve it without cutting down trees, it ain't happening. My postie is pretty good about it because I make sure the area is as snake free as possible. I also make sure Redbacks and Funnel-Webs don't make a home there....