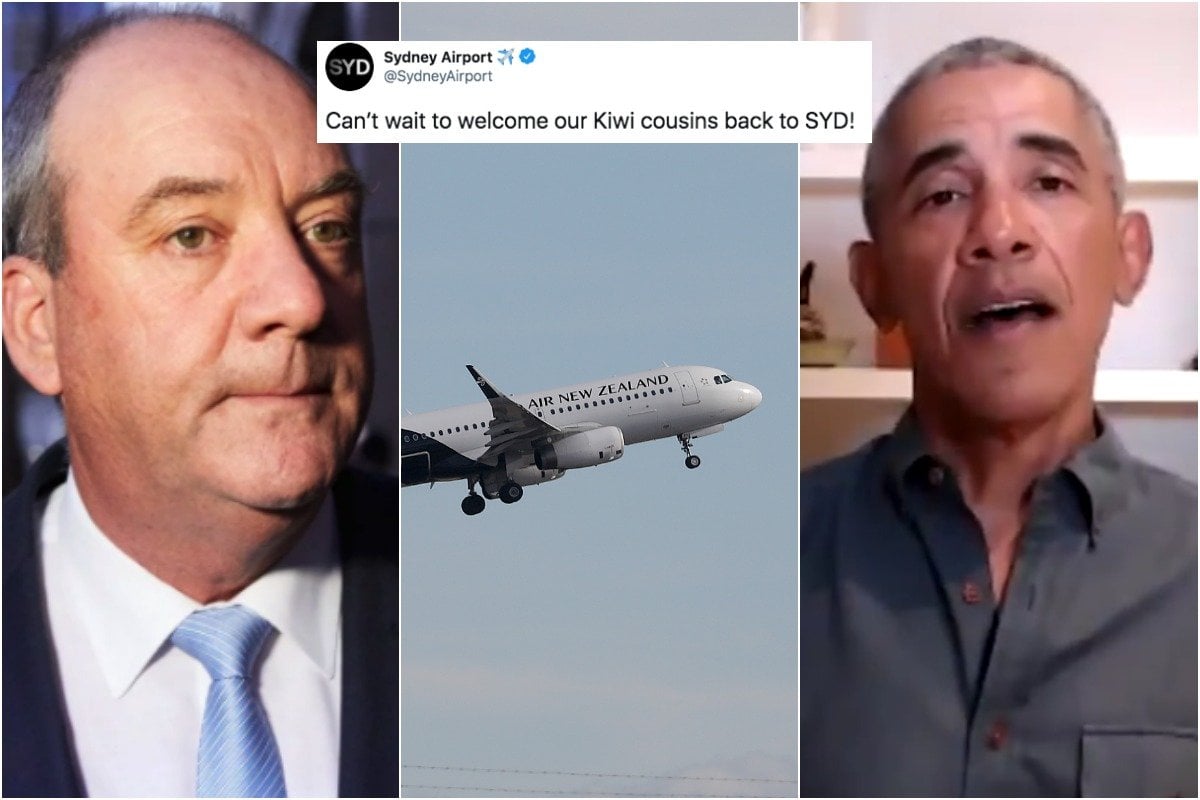 The travel bubble between Australia and New Zealand is finally happening, with hundreds of Kiwis expected to touch down in Sydney today from Jetstar, Air New Zealand and Qantas.

About 90 per cent of those on the flights have one way tickets according to 9NEWS.

No direct flights to Darwin are scheduled, but New Zealand passengers can fly from Sydney to Darwin or Alice Springs.

The travel bubble between Australia and New Zealand is finally taking off, with hundreds of our Kiwi expected to touch down in Sydney today. #9Today pic.twitter.com/LaSH8rbci5

This is a one-way travel bubble, with New Zealanders allowed to enter Australia quarantine free, but if they cross the ditch back to New Zealand again, they'll have to pay for two weeks in hotel quarantine.

Australians are still banned from travelling overseas with international borders closed until at least December 17.

The federal government is hoping to finalise a deal to quarantine thousands of returning Aussie travellers near Darwin.

As Canberra lifts inbound passenger number limits, Northern Territory Chief Minister Michael Gunner is due to confirm the Howard Springs quarantine facility will be used for up to 1000 returning travellers each month.

Prime Minister Scott Morrison is expected to announce special flights to repatriate more than 29,000 Australians, stranded overseas by the pandemic, and keen to get home.

More details were expected at Friday's national cabinet meeting of state and territory leaders, but the virtual gathering has been postponed until next week after a technical hitch with the prime minister's plane left him grounded in Cairns.

#BREAKING: Tomorrow’s national cabinet meeting (the first in a month) has been postponed.

When national cabinet does meet, the definition of a coronavirus hotspot is expected to be on the agenda.

The Commonwealth wants states and territories to adopt its benchmark of a three-day average of 10 COVID-19 cases in major cities.

The corruption inquiry into disgraced former NSW MP Daryl Maguire's misuse of public office is due to conclude its public hearings with one last interrogation today.

But the Commission then published the transcript on its website, leaving it online for half an hour. They've since released an urgent suppression order on it.

ICAC case almost over but still a long way to go for Daryl Maguire https://t.co/uBF4LJx3fH

The inquiry had earlier heard Mr Maguire being told he would receive a kickback for helping "grease the wheels" in a $330 million property deal in western Sydney.

He was also recorded mentioning to Ms Berejiklian how he could pay his debt off with the payment from "the Badgerys Creek stuff".

Scott Robertson, counsel assisting the commission, on Thursday drew attention to Ms Berejiklian's reaction, including to the mention of a man referred to by first name only.

"She doesn't respond by saying, 'I don't know what you're talking about' or "Who's Jimmy?" or "What is the Badgerys Creek stuff?'," Mr Robertson said.

He said he would inform Ms Berejiklian from time to time "in general terms" about the things in which he was involved.

Since revealing the relationship on Monday including its end in August 2020, the premier has strongly defended her integrity and said she would have reported any wrongdoing if she had known about it.

The former parliamentary secretary this week admitted using his status and taxpayer-funded staff for personal profit.

NSW residents can look forward to easing COVID-19 restrictions in relation to open-air concerts and outdoor dining, despite health authorities ramping up calls for more testing.

Up to 500 people will be allowed to attend open-air concerts from Friday, so long as they stay seated and remain four metres apart.

Restrictions for outdoor dining venues will also be relaxed, allowing one patron per two square metres, as long as venues use an electronic QR code to record patrons' contact details.

NSW recorded 11 new cases yesterday - five in hotel quarantine and four local cases that are linked to a known case or cluster, as well as two with no known source.

Andrews promising "closer to COVID normal that it has been for months" on Sunday.

Federal Health Minister Greg Hunt said on Wednesday that Victoria no longer qualifies as a coronavirus hotspot, and restrictions in Melbourne should be eased.

Yesterday there were 6 new cases & the loss of 0 lives reported. The rolling 14 day average is down in metro Melb & stable in regional Vic. More information will be available later today. Info: https://t.co/pcll7ySEgz #COVID19VicData pic.twitter.com/VSwDHaV7mW

"It's just a fact that New South Wales has not had 4,278 mystery cases across the pandemic as it's unfolded," Mr Andrews said yesterday.

"They've not had the virus get into some of the settings that have been typical of this second wave.

"What I would say is on Sunday, we're going to be able to take some steps, we'll be closer to the New South Wales position than we have been for months."

Obama says Trump's calls for him to be indicted and prosecuted are "absurd."

Former US president Barack Obama says Donald Trump’s repeated calls for him to be indicted and prosecuted are “absurd”.

In an interview with Fox Business last week, the President said Obama, Joe Biden and Hillary Clinton should all be indicted and charged with crimes for "spying" on his presidential campaign in 2016.

"The allegation is absurd. It’s false. It’s seemingly part of just his general rage at any discussion of Russian interference in the 2016 campaign. It’s remarkable to me how used to this kind of language (Washington) D.C. has become," Obama told the podcast Pod Save America overnight.

"This is something that even his fellow Republicans tend to just pretend doesn’t happen,” Obama added.

"They kind of dodge reporters when they’re asked about it. The allegations are so absurd that even Republican-controlled committees looking into it have dismissed them. And you know, Attorney-General (William) Barr has dismissed them."

US President Donald Trump and Democratic challenger Joe Biden are set to hold rival televised town halls instead of their second presidential debate at 11AM (AEST).

Both candidates are expected to field direct questions from voters in the separate events, to be broadcast on different TV channels.

The originally scheduled debate was called off after Trump refused to participate in a remote duel. But the new format is coming under intense scrutiny.

Perspective: By giving Trump a town hall to rival Biden’s, NBC is playing into his ratings obsession — again. https://t.co/wBrqZ1Z2vl

The debates commission had announced that the match-up would take place remotely due to concerns over the coronavirus after Trump disclosed in early October that he had tested positive and spent three nights in hospital.

Trump is trailing Biden in the polls, and the gap is widening, as early voting is already underway.

Pod US Democratic vice-presidential nominee Kamala Harris has cancelled travel plans through Sunday as a precaution after one of her staff members tested positive for COVID-19.

Late last night, I learned a non-staff flight crew member & a member of my team tested positive for COVID. I wasn’t in close contact—as defined by the CDC—with either during the 2 days prior to their positive tests.

I've had 2 negative tests this week & am not showing symptoms.

New Zealand goes to the polls on Saturday with an Ardern re-election looking probable.

Jacinda Ardern will begin the final day of campaigning in the box seat to win New Zealand's election today, and is a strong favourite for re-election on Saturday.

Labour's numbers are softer but confirm a trend; it is the 10th straight poll Ms Ardern's party has been in an election-winning position according to NZ's two major pollsters.

With the strong numbers behind her, Ms Ardern stepped into the TVNZ studio and performed strongly in the final leaders debate.

Quick final round of media interviews this morning...four down, four to go! A chance to remind people that you’ve got just today and tomorrow to cast your vote. Check vote.nz to find out where!

With confidence and good humour, the 40-year-old shaded her conservative rival, who desperately needed to leave a strong impression in the final hours to swing the remaining undecided voters.

However, Ms Ardern was sharper with her closing pitch, citing the need for stability in New Zealand's response to COVID, a sales job that's working with Kiwis.

- London is expected to move to "high alert" level on Friday to tackle a swiftly accelerating second coronavirus wave.

- Queen Elizabeth II carried out her first public engagement since Britain's coronavirus lockdown in March, stepping out on Thursday without a mask despite a resurgence of the virus.

Reply
Upvote
1 upvotes
Gladys definitely knew her boyfriend was up to dodgy dealings. If she truly didn’t know  I would support her but cutting him off with ‘I don’t need to know that’ speaks volumes. She certainly isn’t the saint she tried to imply she was.
M
mamamia-user-236023277 2 years ago