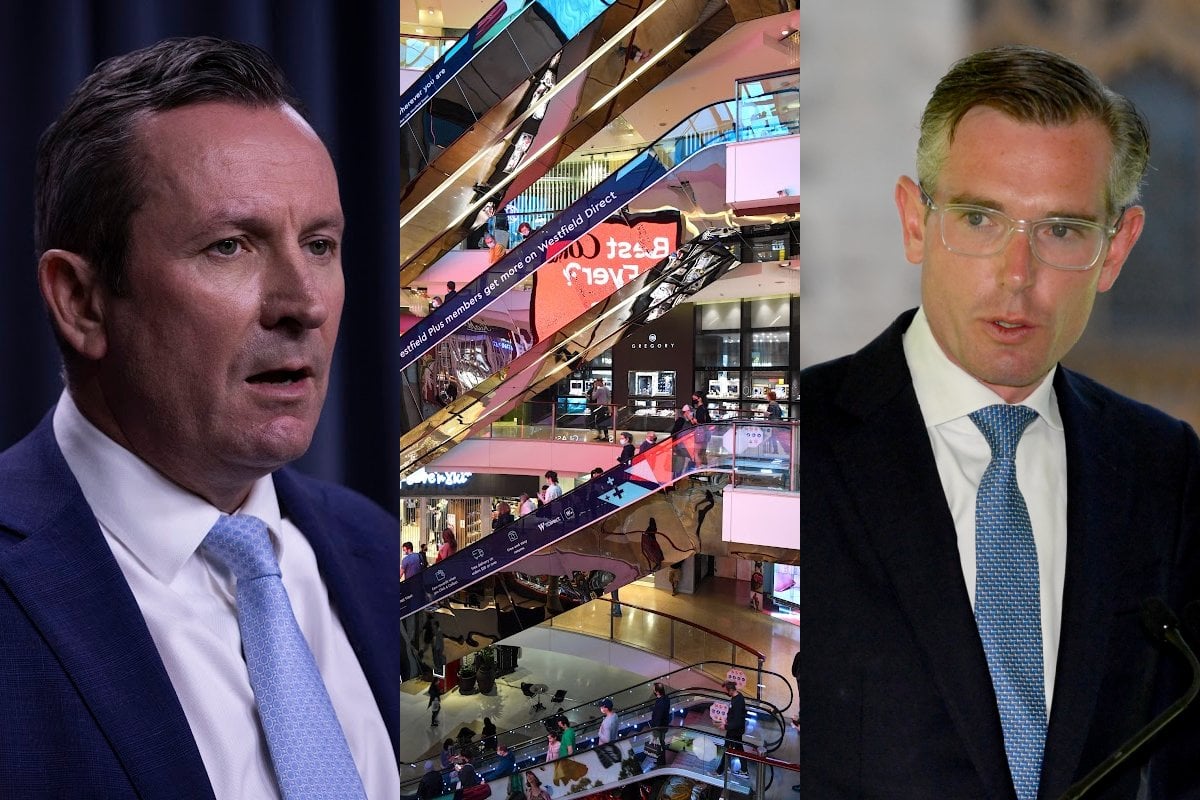 Western Australia will become the first state or territory to require workers to get a third COVID-19 vaccine dose, multiple states are tightening mask rules and New South Wales will reintroduce QR code check-ins, as Australia moves to curb the Omicron variant.

National cabinet was told by health experts on Wednesday that mask-wearing was "highly recommended", but Prime Minister Scott Morrison ruled out any mandates.

"Australians are common-sense people and they know what they need to do to protect their own health," he said.

National Cabinet has opted to not implement a mask mandate across the country, but Scott Morrison says it is "highly recommended" people wear them while indoors to limit the spread of COVID-19.

National cabinet also discussed shortening the timeframe for booster shots and an updated definition of fully vaccinated from two doses to three, but no decisions were made on either item.

State and territory leaders will be updated again in two weeks time about whether testing for travel was needed, with travellers making up a quarter of testing requirements, stretching out waiting times.

National cabinet will also be provided with a standard definition of a casual contact when it meets again in the new year.

In the meantime, states have moved to reintroduce their own regulations and rules.

NSW Premier Dom Perrottet has indicated his state will reintroduce QR code check-ins in most settings including hospitality and retail and is set to provide free rapid antigen testing kits.

While masks are currently required in high-risk settings like hospitals, airports and public transport, Perrottet said wearing them elsewhere was a matter of "personal responsibility".

Queensland, Tasmania and the ACT have now reintroduced mask-wearing indoors. Victoria will make a decision about its mask rules on Thursday.

WA becomes the first to mandate COVID boosters ahead of the state’s expected reopening in Feb. It comes as researchers plead with the unvaccinated to get their first dose in the next week. #abcPM @RadioNational https://t.co/iyD7istfRJ

WA will reintroduce a hard border with Tasmania and the Northern Territory from Boxing Day.

The Western state has become the first to mandate booster vaccines for workers.

About 75 per cent of WA's workforce are subject to the mandates but they were previously only required to receive two doses. Premier Mark McGowan says workers will now need to have a third dose within one month of becoming eligible for the booster.

Tens of thousands of people in NSW are facing Christmas in isolation as the Omicron COVID-19 variant continues to run rampant through the state.

Some 15,815 people have tested positive since December 16, with Wednesday's record daily caseload of 3763 set to be smashed on Thursday.

Under current rules, people with COVID-19 must self-isolate at home until medically cleared, even if fully vaccinated.

One in five cases uncovered in the past week has been in Newcastle or neighbouring Lake Macquarie, while the City of Sydney and Canterbury-Bankstown have experienced faster spikes in recent days.

Sydney photographer Genesis Cerezo is facing decades in prison, after allegedly sexually abusing a teenage girl over a three-year period.

The 29-year-old was arrested at his Sydney home on Tuesday morning and charged with 31 offences.

He was refused bail and will appear in Central Local Court on Thursday over the allegations, including three counts of using a child over 14 to make child abuse material, one count of aggravated sexual assault of a child under 16 and four counts of having sexual intercourse with a 15-year-old, the Sydney Morning Herald reported.

"Police will allege in court that the man sexually abused the girl on multiple occasions during photo shoots across Sydney between January 2018 and February 2020, when the girl was aged between 13 and 16," NSW Police said in a statement on Wednesday.

The man was an Australia's Got Talent finalist in 2012 and competed as a beatboxer.

Preliminary studies published in the UK and South Africa found the Omicron variant appears to be milder and causing fewer hospital admissions than other COVID-19 variants.

The South African study, which has not yet been peer-reviewed, found that people diagnosed with Omicron in South Africa between October 1 and November 30 were 80 per cent less likely to be admitted to hospital than those diagnosed with another variant in the same period.

Wave of Omicron appears to be milder, with potentially around a two-thirds reduction in those needing hospital treatment, preliminary studies in UK and South Africa find https://t.co/KAS6XbxN2J

The study found that people who were hospitalised with Omicron in October and November were 70 per cent less likely to develop severe disease than those admitted with Delta between April and November.

Cohen said that the study's findings could likely be generalised to other countries in sub-Saharan Africa that also have very high levels of previous infection.

A separate study from Scotland said if Omicron behaved the same as Delta, they would expect around 47 people to have been admitted to hospital already, the BBC reported. At the moment there are only 15.

COVID-conscious shoppers are expected to buy with their browsers rather than join the crowds, but that doesn't mean we're buying any less.

Record online sales are expected this Boxing Day, with shoppers tipped to spend $4 billion - more than last year - in stores and online, based on Commonwealth Bank data.

Australian Retailers Association chief executive Paul Zahra predicted the online record because people could or would not spend their money on overseas travel during the COVID-19 pandemic.

People had also saved money after spending more time at home, he said.

Australians spend about $60 billion per year on overseas travel and this money is being spent in other ways.

- Britain has reported more than 100,000 new daily COVID-19 cases for the first time since widespread testing was introduced. There were 106,122 cases reported on Wednesday compared with 90,629 on Tuesday.

- Brigitte Macron is set to take legal action over an internet conspiracy theory that she is a transgender woman and was born male. The French first lady has been targeted on social media with the false claims, after they were published on a far-right website in September then circulated by conspiracy theorists.

Brigitte Macron to sue over false claims she was born male https://t.co/9dL6ULAqbA

- In a late entry for 2021's greatest 'Florida Man' story, Florida authorities said they found cocaine and methamphetamine wrapped around a man's penis during a traffic stop on Saturday, but the man denied the drugs were his.