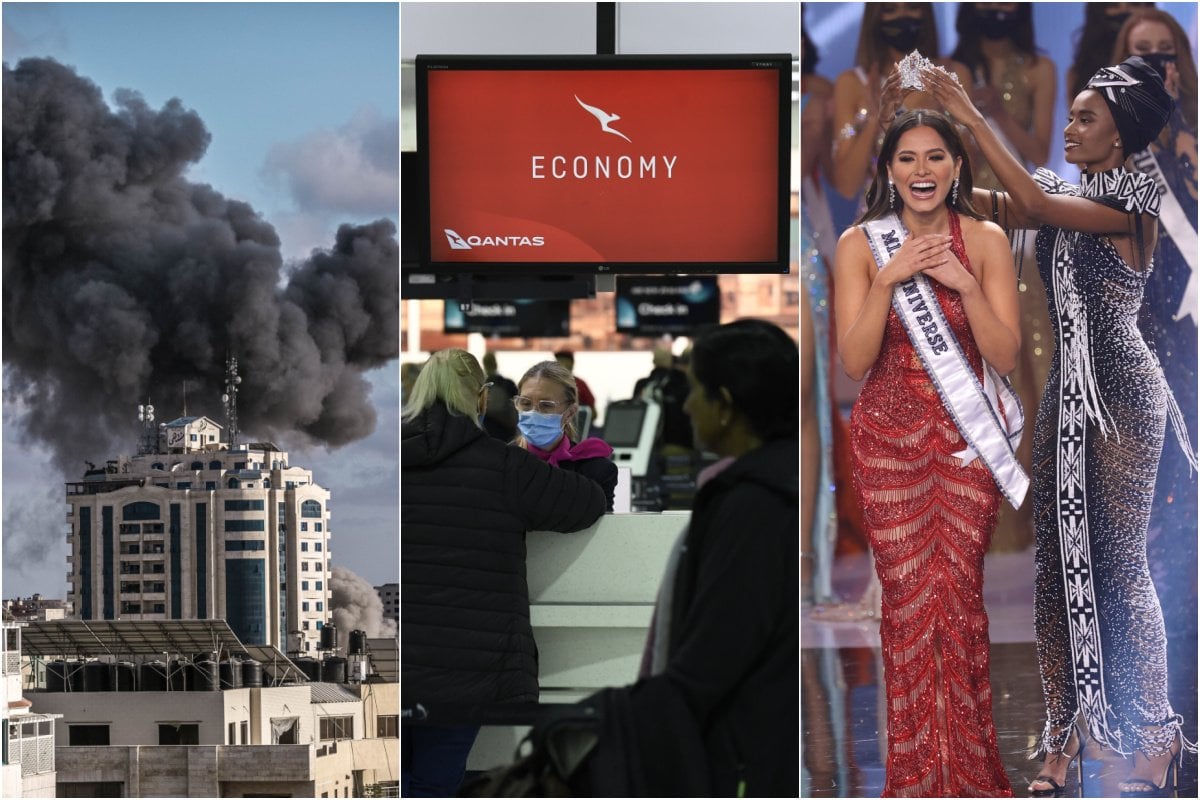 Prime Minister Scott Morrison has refused to reveal the benchmark for reopening the international border, saying only that restrictions will remain in place until it is safe to do anything different.

"It's not safe to take those next steps right now, it's not. But we'll keep working on what the next steps are," he told reporters in Queensland on Monday.

The prime minister is taking comfort in broad support for the closed border.

Three in four people believe Australia's international border should remain closed until at least the middle of next year.

However, there is a growing push from the business community and within government ranks to open the border sooner than planned.

A poll published by The Australian has found 73 per cent of voters think the border should stay closed until at least mid-2022.

Only one in five people believes the border should open as soon as all Australians who want to be are vaccinated.

But a group of Liberal MPs including Jason Falinski want the country to reopen as soon as possible. They also want vaccinated Australians to be given a greater opportunity to travel overseas.

Mr Falinski said it was understandable people had adopted a "fortress mentality" during the coronavirus pandemic.

"But it doesn't need to be that way," he told Seven.

"We spent a lot of money keeping families safe, we don't want to keep them apart."

NSW Premier Gladys Berejiklian has outlined her ambition to have international borders open "sooner than the middle of next year" if "we can get the majority of our population vaccinated."

Israel has killed a senior Palestinian militant commander in heavy air strikes on Gaza as Islamist groups have renewed rocket attacks on Israeli cities despite mounting international calls for a ceasefire.

As the fiercest hostilities in the region in years entered a second week, US Secretary of State Antony Blinken urged all sides to protect civilians.

A thousands rocket were fired from Hamas (Palestinian Militant Group) towards Israel🇮🇱.
Militant group Hamas confirmed that its Gaza City commander was killed in an Israeli airstrike on Wednesday.#PalestineUnderAttack #IsraelPalestine #Israeli pic.twitter.com/apQUcjJzYZ

Gaza health officials put the Palestinian death toll since the hostilities flared last week at 201, including 58 children and 34 women.

Ten people have been killed in Israel, including two children.

Police said an Israeli man also died in hospital on Monday after being attacked last week by Arab rioters as clashes broke out in mixed Jewish-Arab communities in Israel, a new front of violence that has been ignited by the Gaza fighting.

The killing of Hussam Abu Harbeed, Islamic Jihad's armed commander for north Gaza, was likely to draw a fierce response from the militant group that is fighting alongside Hamas, the Islamist movement that governs the coastal enclave.

The Israeli military said in a statement that Harbeed had been "behind several anti-tank missile terror attacks against Israeli civilians" and an Israeli general said his country could carry on the fight "forever".

Militant groups in Gaza also gave no sign that an end to fighting was imminent.

Soon after Harbeed's death, Islamic Jihad fired rockets at the Israeli coastal city of Ashdod and medics said seven people had been injured.

The US Supreme Court has agreed to consider a major roll-back of abortion rights, saying it will take up Mississippi's bid to enforce a 15-week ban on abortion.

The court's order sets up a showdown over abortion, probably in the northern autumn, with a more conservative court seemingly ready to dramatically alter nearly 50 years of rulings on abortion rights.

BREAKING: U.S. Supreme Court agrees to consider a major rollback of abortion rights, saying it will take up Mississippi’s ban on abortions after 15 weeks. https://t.co/7gZPYjVc14

The court first announced a woman's constitutional right to an abortion in the 1973 Roe v Wade decision and reaffirmed it 19 years later.

The state's ban had been blocked by lower courts as inconsistent with Supreme Court precedent that protects a woman's right to obtain an abortion before the fetus can survive outside her womb.

It came almost two weeks after the Twenty20 tournament was suspended because of COVID-19.

Players, coaches and commentators were on board a charter flight from the Maldives that landed in the NSW capital on Monday morning.

Nearly two weeks after the tournament was suspended, the majority of the Australians involved in the IPL have returned home https://t.co/9AsBp1E0ki

Former Test batsman Mike Hussey, who has been self-isolating in India after contracting the coronavirus, is expected to arrive later on Monday via a commercial flight from Qatar.

The cricketers will spend a fortnight in NSW's hotel-quarantine system.

They have been given no exemptions or concessions but are being accommodated outside the state's cap on returned travellers.

A 118-page annual report, released on Tuesday by the Australian Institute of Health and Welfare, shows one in four of the roughly 46,000 children in out-of-home care in mid-2020 were Indigenous.

At the time there were about 18,900 Indigenous children in out-of-home care, which includes living with a relative or foster carer.

That represents one in 18 Aboriginal and Torres Strait Islander children in Australia, and is 11 times higher than the rate for non-Indigenous kids.

Almost two-thirds (63 per cent) of that group were living with family or other Indigenous caregivers, with the rest in other arrangements including foster care.

"In positive news, over 80 per cent of Indigenous children who exited out-of-home care into more stable and permanent arrangements, did not return to care within 12 months," AIHW spokesman Dinesh Indraharan said.

Victoria had the highest reported rate of Indigenous kids in out-of-home care of all states or territories, followed by Western Australia and the ACT.

The UK can sit inside hospitality venues for the first time since January.

People in England, Scotland and Wales can sit indoors in pubs and restaurants and can hug each other again in the biggest single lifting of coronavirus restrictions since the start of the UK's successful vaccination campaign.

While bars and restaurants in England and Wales reopened their indoor seating areas for the first time in months on Monday, Scottish venues where this was already possible can now serve alcohol indoors again.

Across Britain, larger groups of people can also meet socially: for indoors the limit in England is now up to six people or two households; for outdoors the maximum is 30.

A number of pubs in England opened at midnight, as lockdown restrictions were eased across the nation

After consistent guidance since spring last year to avoid direct contact with people not in their own family or so-called "support bubble," UK Prime Minister Boris Johnson advised citizens that they can now make their own "informed decisions" and be "cautious" when it comes to hugging loved ones.

Other recreational venues such as cinemas, museums, theatres and concert halls were also allowed to reopen in England, Scotland and Wales, although there are capacity limits on large events.

Andrea Meza of Mexico has been crowned Miss Universe for 2020, after the event was postponed last year due to the coronavirus pandemic.

Meza, who has a software engineering degree, beat out out Miss Brazil at the end of the night, screaming on Sunday when the announcer shouted "Viva Mexico!"

Previous winner Zozibini Tunzi fit the crown on Meza's head and waited to make sure it would stay in place as Meza beamed and took her first walk to the front of the stage.

Tunzi, a public relations professional who became the first black woman from South Africa to win the contest, had held the title since December 2019.

- India has reported a further decline in new coronavirus cases but experts warn the count is unreliable due to a lack of testing in rural areas. The country is still recording daily deaths above 4000.

- Prince Harry will talk about the trauma he suffered following his mother's death in a new mental health docuseries to be released this week.

- Pop star Ariana Grande, 27, has married realtor Dalton Gomez in a "tiny and intimate" wedding of less than 20 people over the weekend, reports TMZ.