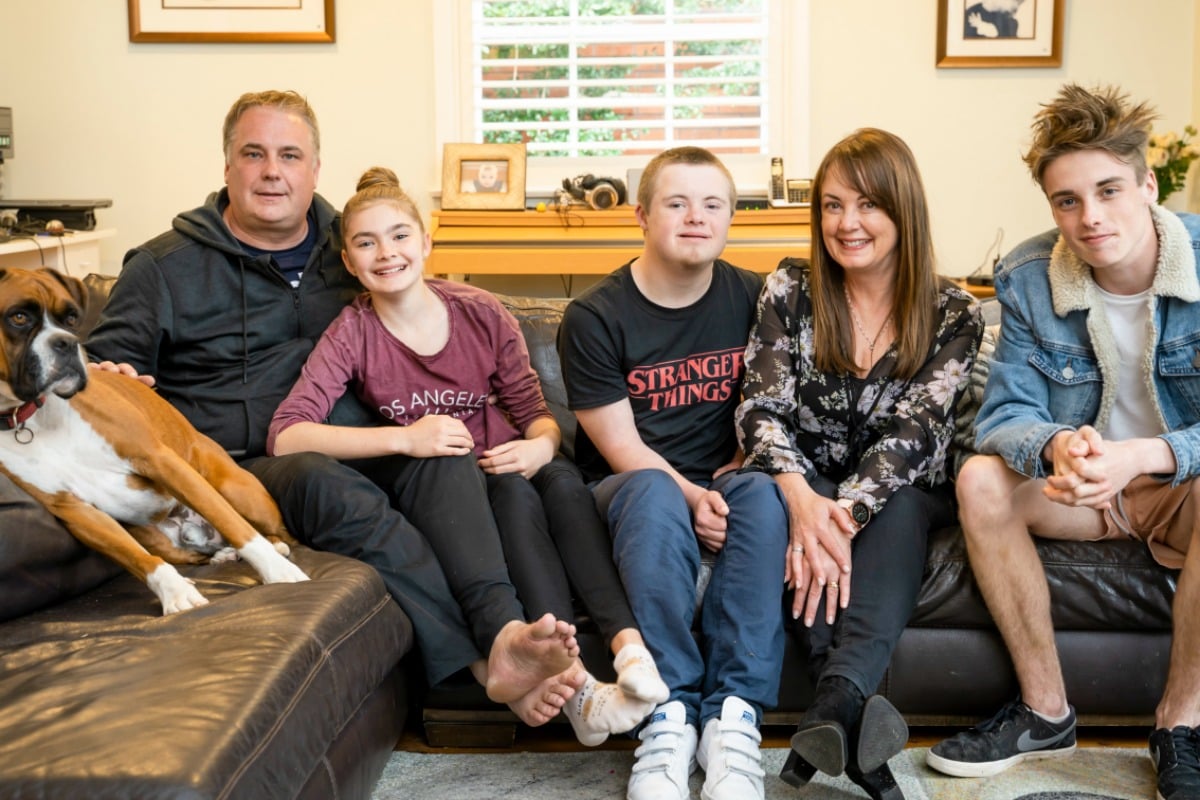 Ciaran Lund is much the same as most teenage boys. Except he cooks, he vacuums, he uses the washing machine and he cleans his bedroom.

He's also popular, hilarious and can't wait to get a job when he leaves school.

The 16-year-old also happens to have Down syndrome, and it's for this reason alone that his entire family of five have spent nearly five years thinking they were going to be kicked out of Australia - a place they've called home since 2013.

John and Anita Lund moved to Sydney's northern beaches from the English city of Sheffield on a 457 visa after John landed a job with the New South Wales government on a two-year secondment.

WATCH: The Lund Family will be appearing on Who Gets To Stay In Australia tonight on SBS. Post continues after video.

But after cementing themselves in the community, the Lund family were told they were ineligible to stay here permanently.

Their application for residency was denied purely because of their son Ciaran.

The Australian government calculated that his future needs would include access to disability and welfare services that would exceed the threshold of $49,000 over 10 years.

Because Ciaran failed the government's test, the whole family failed.

For the last four-and-a-half years the Lund family have been fighting that decision, and in 2018 after two failed applications they were given just 35 days to leave Australian soil. 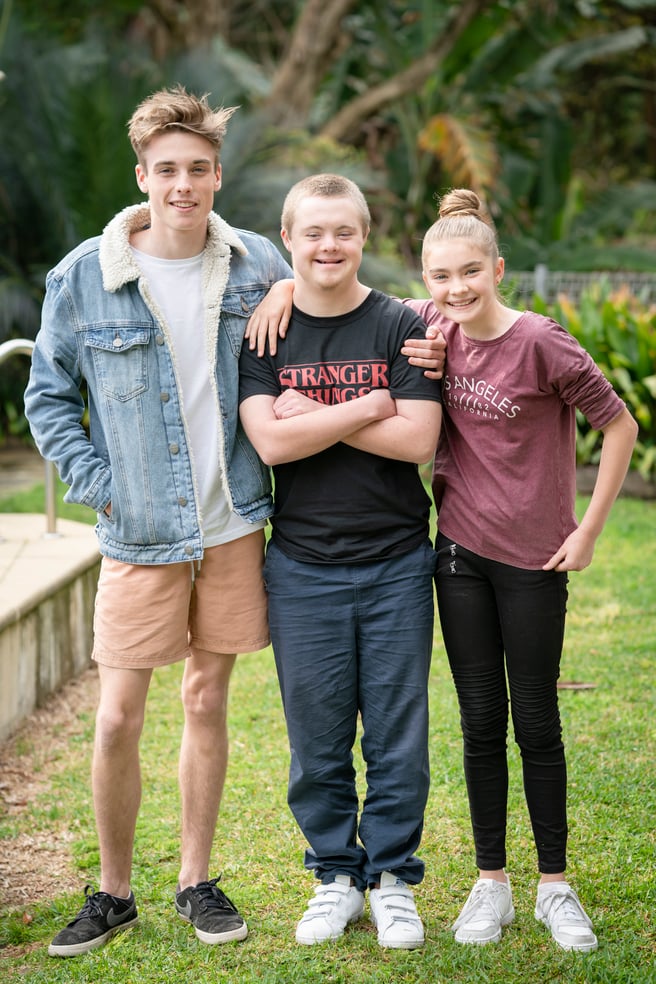 As the years have dragged on, it’s been hard to stay positive.

"The pressure of not knowing is unimaginable and the kids are asking questions. Telling the kids and assuring them that everything is going to be just fine gets harder as each day passes," Anita told Mamamia.

All three kids are enrolled in the local school; 17-year-old Ewan is in the Cadets and 11-year-old Sienna loves to surf. Anita runs her own business which employs more than 20 staff.

But reality soon became a mixture of "helplessness, numbness and fear for the kids".

"They have lived here for most of their lives. We try to push it to the back of our minds but that’s getting harder every day. Returning to England simply isn’t an option for us, we’re prepared to fight this to the end," she told Mamamia.

As for the government's calculations about Ciaran's future "costs", Anita says they're not true.

"We understand there has to be rules, however, in our view singling out people with disabilities and making assumptions about what contribution those individuals can make is unrealistic.

"We don’t understand how the Department can assume Ciaran will have to live in sheltered housing, never hold down a job and basically be a burden on the Australian taxpayer. We find it unbelievable that there is still the stereotype that people with Down's syndrome can’t live a meaningful life like the rest of us." 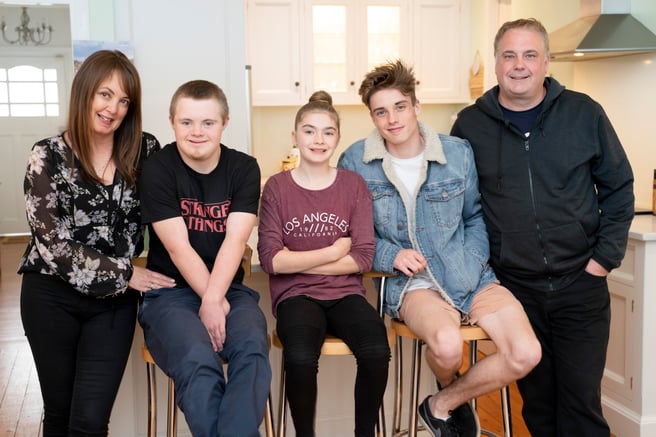 The Lund family live on Sydney's northern beaches, but have been told for the last 4.5 years that they can't stay in Australia. Image: SBS.

Anita and the family feel like they've been treated like criminals who are living in this country unlawfully - despite the fact that they pay taxes and invest and contribute to the Australian economy.

"The whole family including Ciaran's siblings are suffering as a consequence, it’s a terrible situation," she said.

"It’s unfair to treat Ciaran as a hypothetical person and we feel that the Department is looking at a label rather than a human being."

Since speaking to Mamamia, the Lund family has received the news they've been dreaming of - the Administrative Appeals Tribunal has overturned the decision that has been threatening to send them back to England.

But as the Lunds look towards permanent residency at last, there are at least 25,000 applications that get rejected by the government every year, according to SBS.

As the publication questions, it's not clear how many of them are on "health grounds" like the Lund family were told.

You can see more of The Lunds' story on Who Gets To Stay in Australia tonight at 8.30pm on SBS.

Reply
Upvote
Not forgetting that almost every person with Down Syndrome will require at least some type of regular care and supervision and that burden either falls on their siblings or the govt when their parents pass, and the NDIS/respite/care system is over-stretched as it is, there are numerous health problems and almost all people with DS will have at least 2.  Many are born with a hole in the heart/heart problems, eyesight, intestinal problems, and the rate of Dementia in DS people is much much higher for people without DS, it is also common for people with DS to get Dementia around the age 40 mark.
These are facts, not cutesy emotion that make out people with Down Syndrome can live a 'normal life'.  They can't.  That, is the reality.
K
kat.smitho 2 years ago

Reply
Upvote
@salemsaberhagen do you know anyone with Downs?
Yes, some will require support of various kinds, but some won’t. This isn’t like diabetes, where you have it or you don’t, Downs is a different in every person. It’s a scale, not a fixed point. Some are perfectly capable of living just like you or I.
I think it’s discriminatory to be basing it purely off a diagnosis.  It’s literally our government discriminating against disabilities.
S
snorks 2 years ago

Reply
Upvote
@kat.smitho
'I think it’s discriminatory to be basing it purely off a diagnosis. It’s literally our government discriminating against disabilities.' - Yes it is, it's designed to be that way.
S
salemsaberhagen 2 years ago

Reply
Upvote
@kat.smitho Yes, I do.  And that, is how I know that everyone with with Down Syndrome WILL require at least some kind of support.  It is a syndrome on a spectrum, but none of them are capable of living "just like you or I".  That is the myth I tried to dispel in my post.  Please re-read my post.  It is completely wrong to say that any can are capable of living "just like you or I".  That's a lie, because they simply cannot, by virtue of the fact they have Down Syndrome, and even on the mildest spectrum they will always require some assistance.  I question whether you know anyone with Down Syndrome if you think they can live like you or I.  They cannot.  That's a fact.
K
kat.smitho 2 years ago

Reply
Upvote
@salemsaberhagen actually YOU are wrong. I do know people with Downs that are able to live independently, have jobs and pay bills. Are the different? Yes. Do they perhaps require more support from their community because there a bastards out there who want to take advantage, yes. Not every person with Downs will require 24/7 care. Not every person with Downs will require a carer, or a group home or other intensive support.
Regardless, they way we have measured societies for centuries is by looking at how the treat the most vulnerable - the children, the elderly and the sick or disabled. We are an INCREDIBLY wealthy country. We have it SO good in terms of economy, environment, health care, access to food and housing. It is inherently wrong that we turn away a family willing to work to better our country and themselves because one of them is disabled. It is curlish, discriminatory and WRONG
L
laura__palmer 2 years ago

Reply
Upvote
Wow. This is pretty backwards and I think our government needs to modernise it's thinking. Obviously the people making these decisions haven't spent too much time with people who have Down's Syndrome.
S
snorks 2 years ago

Reply
Upvote
3 upvotes
@laura__palmer Possibly not, however the Migration Treatment of Disability committee did receive 113 submissions from various doctors and groups and made their recommendations based on that.
L
laura__palmer 2 years ago

Reply
Upvote
@snorks But his own family, who support him, have said that it's incorrect, and you'd think they'd have some idea. It doesn't sound like he's a burden on the Australian taxpayer at all.
S
snorks 2 years ago