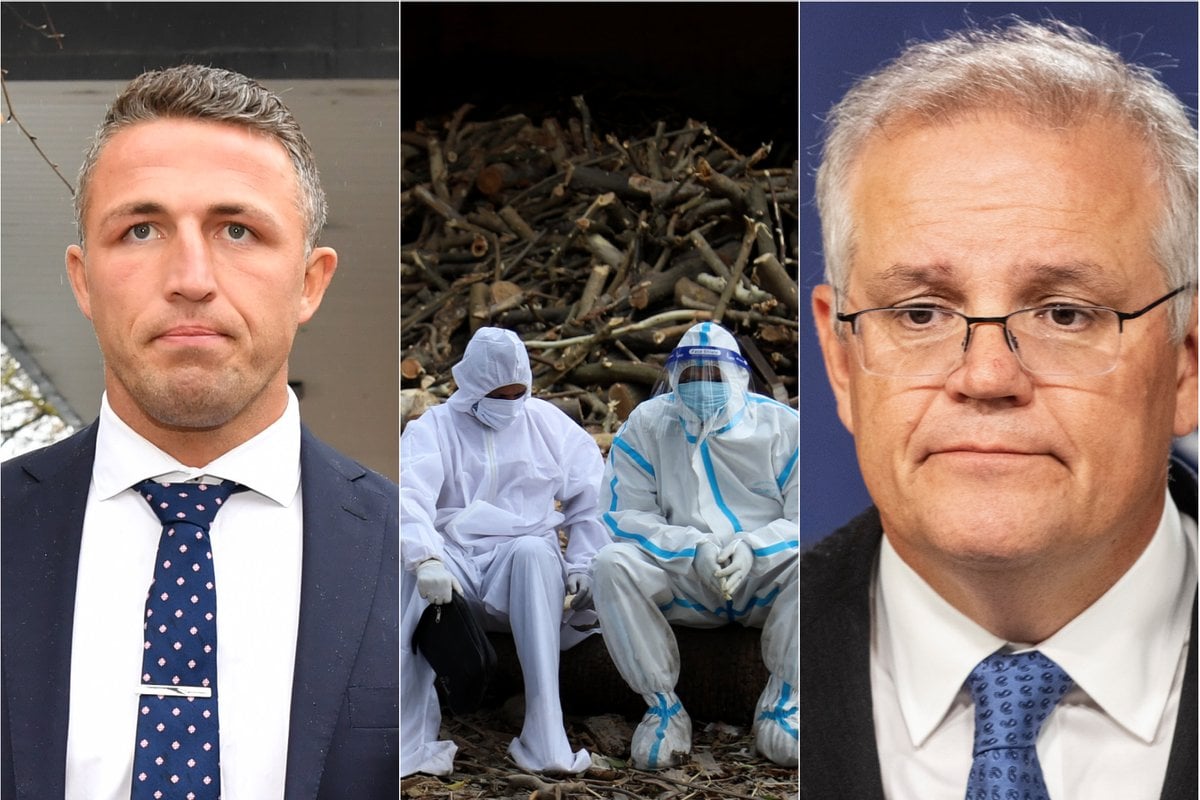 "The pandemic is raging." Morrison says flight pause will be temporary.

Scott Morrison says the government is committed to bringing more Australians home from overseas, but can't risk a third wave of COVID-19.

As the prime minister continues to cop flak over the decision to ban flights back from India until May 15, he is warming to the idea of a quarantine centre in Victoria and talking up the expansion of the Northern Territory's Howard Springs to a 2000-bed capacity.

A proposal for a quarantine facility in the Queensland city of Toowoomba appears doomed, as @ScottMorrisonMP says the government is committed to bringing more Australians home from overseas, but can’t risk a third wave of COVID-19. #COVID19 #auspol #7NEWS https://t.co/zNn9Iug4v7

However, a proposal for a quarantine facility in the southern Queensland city of Toowoomba appears doomed. Cabinet minister David Littleproud said the Wellcamp facility - aimed at hosting up to 1000 travellers and 300 staff - would expose western Queensland to COVID risk.

The prime minister said the latest figures on positive cases in passengers coming out of India demanded the government pause flights.

"The pandemic is raging," he said.

"And so my government will take the steps necessary and the actions necessary to protect Australians so we can also bring more Australians home safely."

Eight crossbenchers have written to Mr Morrison asking him to revoke the biosecurity pause, urgently repatriate Australians in India starting with the most vulnerable and set up a dedicated surge capacity quarantine facility.

The United Nations has also raised "serious concerns" about the ban, with the committee saying they generally saw "few, if any" circumstances to justify depriving citizens of their right to return home.

Indian media are reporting his test result came back on Tuesday.

Hussey, who's working as batting coach for the IPL's Chennai Super Kings, is now undergoing a second test, a team source told The Times of India.

Batsman Steve Smith and other Australian cricketers including Hussey are isolating in India after the IPL was suspended amid a widening coronavirus outbreak in the country.

While nationals from other countries will begin returning home from today including players from England who will go into a 10-day quarantine on their return home, Aussie stars including star batsman Steve Smith will have to remain in India until the Australian government lifts the ban on their return.

Former South Sydney NRL captain Sam Burgess has been fined more than $1000 but spared a conviction after drug driving in an unregistered BMW on a highway south of Sydney.

The father-of-two on Tuesday was placed on a conditional release order for nine months, requiring him to be of good behaviour, after police stopped him on the Hume Highway in February.

Burgess must also participate in a traffic offenders intervention program by the end of July and pay two $581 fines.

Sam Burgess pleads guilty to driving with traces of cocaine in his system https://t.co/ZkRGyCglyQ

He pleaded guilty to driving a vehicle with an illicit drug present in his blood and using an unregistered car on a road.

The England-born former footballer also pleaded guilty to driving without a NSW driver's licence while a resident, an offence for those who've lived in the state for more than three months.

Tuesday marked the first time the 32-year-old former prop had returned to Moss Vale Local Court since successfully overturning a conviction for intimidating his former father-in-law in 2019.

Dani Laidley sues Victoria Police for outing her in public as transgender.

Former AFL coach Dani Laidley is suing Victoria Police after it allegedly leaked vulnerable photos outing her as transgender to the public.

The images of Ms Laidley made news on tabloid press in May 2020. The first was a mugshot where she was wearing makeup. In the second, she had a blond wig on.

She alleges three police officers acted with malice and used derogatory language to describe her in an internal message group. #9Today pic.twitter.com/M4fLtQSsZQ

The ABC reports court documents filed on Monday accused one detective of publishing the first photograph to a WhatsApp group called "SD1 Gentleman's Club", which had nine members.

The same detective is accused of sending the image to other officers, allegedly saying Ms Laidley was "dressing like a t****y".

Communities will get help rebuilding and recovering from natural disasters from a new national agency to be funded in next week's federal budget.

The National Recovery and Resilience Agency was flagged last year in the government's response to the natural disaster royal commission.

The agency will be given $600 million to fund projects such as bushfire and cyclone proofing houses, building levees and improving the resilience of telecommunications and essential supplies.

#Australia will create a "National Recovery and Resilience Agency" to hasten the delivery of government aid after a series of floods, bushfires, cyclones and drought in the past two years, Prime Minister Scott Morrison will say on Wednesday #disasters https://t.co/LyjoxrAXIq

Communities in NSW and Queensland hit by recent storms and floods and WA areas affected by cyclones will benefit.

India has reported more than 300,000 new coronavirus cases for a 12th straight day to take its overall caseload to just shy of 20 million, as scientists predict a peak in infections in the coming days.

Medical experts say real numbers across the country of 1.35 billion may be five to 10 times higher than the official tally.

But the health ministry offered a glimmer of hope, reporting that positive cases relative to the number of tests conducted fell on Monday for the first time since at least April 15.

India's coronavirus cases may peak between May 3-5, according to a mathematical model from a team of scientists advising the government, a few days earlier than a previous estimate as the virus has spread faster than expected.

Hospitals have filled to capacity, medical oxygen supplies have run short and morgues and crematoriums have been swamped as the country deals with the surge in cases.

Afghan security forces have fought back a huge Taliban offensive in southern Helmand province, officials and residents say, as militants launched assaults around the country following a missed US deadline to withdraw troops.

Although the United States did not meet the May 1 withdrawal deadline agreed in talks with the Taliban last year, its pull-out has begun, with President Joe Biden announcing all troops will out by September 11.

Critics of the decision to withdraw say the militants will try to sweep back into power.

"There was a thunderstorm of heavy weapons and blasts in the city and the sound of small arms was like someone was making popcorn," Mulah Jan, a resident of a suburb of provincial capital Lashkar Gah, told Reuters.

"I took all my family members to the corner of the room, hearing the heavy blasts and bursts of gunfire as if it was happening behind our walls," he said. Families that could afford to leave had fled, but he had been unable to go, waiting with his family in fear before the Taliban were pushed back.

Attaullah Afghan, the head of Helmand's provincial council, said the Taliban had launched their huge offensive on Monday from multiple directions, attacking checkpoints around the outskirts of Lashkar Gah, taking over some of them.

- As military tensions rise in the Asia-Pacific region, Australia is commemorating the largest naval battle fought off its shores 79 years ago - The Battle of the Coral Sea.

- The facebook oversight board will announce this week whether former President Donald Trump can return to the social media platform.

- US President Joe Biden says he would like to hold a proposed summit with Russian President Vladimir Putin during his June trip to Europe.

- Meghan Markle has written a children's book, set for release on 8 June. The book explores the "special bond between father and son" and began as a poem she wrote for Prince Harry on Father's Day.