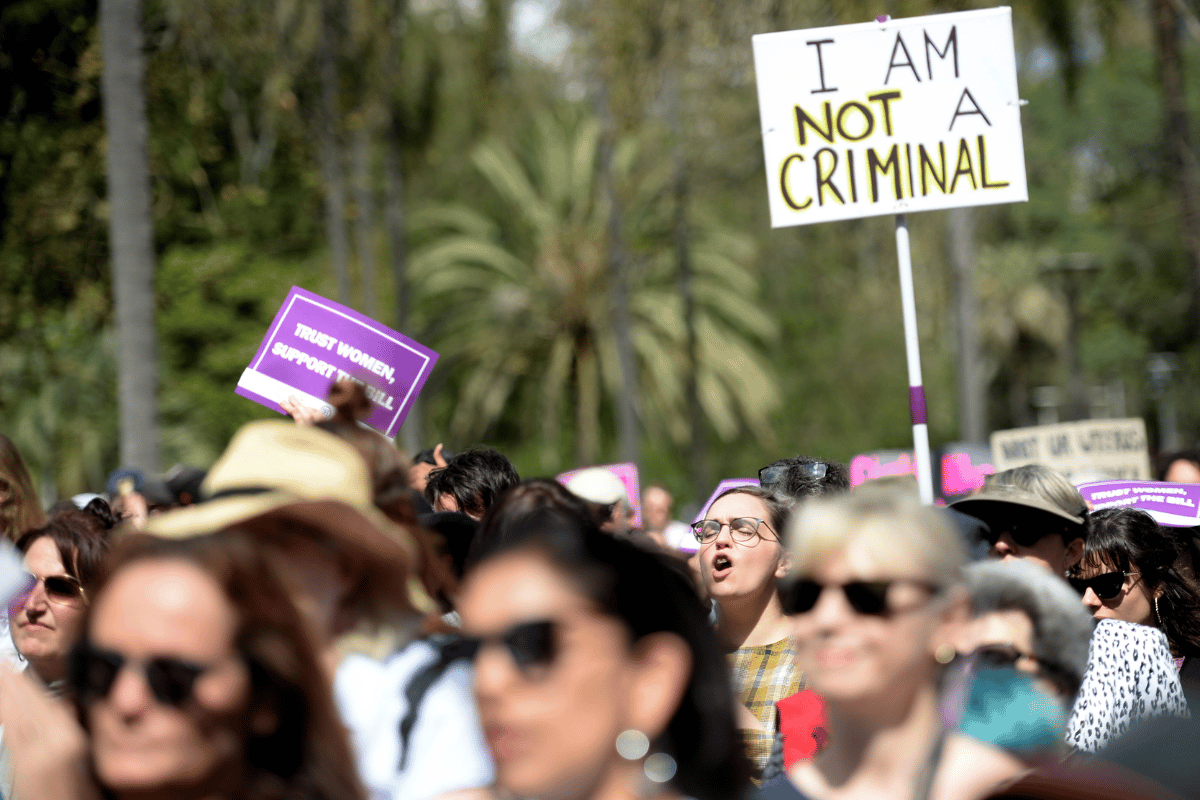 America no longer feels like the home of the brave and the land of the free. But did it ever?

The Supreme Court voted 6-3 to overturn Roe v. Wade, a ruling from decades ago that said a woman has a constitutional right to have an abortion.

Already, eight states have legislated to ban abortion in all circumstances, including rape and incest. An additional 13 states are likely to adopt the ban, while a further nine states are uncertain.

It has sparked conversations and outcry across the world, with fears for the future of reproductive rights.

In Australia, a Roe v. Wade situation is extremely unlikely. But the overturning of Roe v. Wade in America does not only still affect Australia, but women's reproductive rights across the world.

And it has everything to do with abortion stigma and accessibility.

Watch part of Speaker of the House Nancy Pelosi's speech on Roe V Wade being overturned. Post continues below.

The ideological threat Roe v. Wade's overturn poses for the rest of the world.

The threat of a domino effect lies in the perpetuation and heightening of attitudes that abortion is 'bad' or 'criminal'.

Even in the most recent federal election in Australia, there were political parties advocating 'pro-life' anti-abortion sentiment. Just this year, the then-assistant minister for women addressed an annual Queensland anti-choice rally. What the end of Roe v. Wade could encourage is for this perspective to increase.

As Dr Prudence Flowers wrote for The Conversation, it will "likely embolden our own anti-abortion activists and politicians, who can question public provision of abortion, push for additional legal and medical regulations, and seek to revise laws by emphasising US talking points."

"It ensures abortion is not viewed as healthcare, that anti-choice rhetoric is amplified in mainstream media, and that abortion patients and providers are further stigmatised," she continued. "Cumulatively, these tactics have a chilling effect that will likely make access to abortion even harder."

But it's not just Australia we should be thinking about. It's the rest of the world too - especially countries which have a track record of conservative politics, human rights atrocities and a lack of respect for women. Because if America can overturn reproductive rights, it sets a dangerous precedent.

"In Australia, abortion is protected at the state and territory level: we don't have a constitutional right to abortion," Human Rights Law Centre associate legal director Adrianne Walters said to ABC News.

So throughout history, it's been up to states and territories to decide the fate for women in those specific regions.

NSW took abortion out of its criminal legislation in 2019. The new legislation allows terminations up to 22 weeks gestation. After 22 weeks, two medical practitioners must consent for the abortion to take place at this stage of pregnancy.

QLD decriminalised abortion in 2018. It is available on request in the first 22 weeks of pregnancy with the approval of two doctors required for any terminations after that time, like with NSW. Doctors who 'conscientiously object' must refer the woman seeking an abortion to a doctor that will provide one.

In the ACT, abortion can be accessed up to 16 weeks through a GP.

VIC decriminalised abortion in the state in 2008. Patients can seek an abortion up to 24 weeks gestation, after which doctors must approve.

In TAS, you can legally get an abortion by the 16th week of pregnancy. The service may also be available after that time frame after an assessment by two doctors.

Listen to The Quicky: What will the US criminalising abortion mean for Aussie women? Post continues after audio.

Recent states and territories to change their laws include Northern Territory (2021) and South Australia (2022). In the Top End, abortion requires the approval of two doctors after 24 weeks of gestation. Surgical and medical abortion are available in the public health system.

As for SA, abortions can be carried out upon request of up to 22 weeks and six days of pregnancy. It will only allow late-term abortions to occur when deemed "medically appropriate" by two medical practitioners.

This is subject to counselling by a medical practitioner other than the one performing the abortion, or when the woman may face serious personal, family or social consequences if an abortion is not performed, when the pregnancy causes serious danger to the woman's mental health, and when the life or physical or mental health of the woman is endangered.

The offence of 'unlawful' abortion may only be committed by the persons involved in performing the abortion. The patient themself is not subject to any legal sanction in Western Australia.

Ultimately, women and pregnant people across this country still have to navigate a hell of a lot of regulations in order to access care.

Our friends across the ditch made the move to decriminalise abortion across the country back in 2020. New Zealand's Prime Minister Jacinda Ardern described Roe v. Wade as "incredibly upsetting" and a move to wind back women's reproductive rights.

"Here in New Zealand we recently legislated to decriminalise abortion and treat it as a health rather than criminal issue. That change was grounded in the fundamental belief that it's a woman's right to choose."

The Kiwi leader recognised people hold strong convictions on both sides of the abortion debate, but said those beliefs should not extend to preventing someone making a decision reflecting their own circumstances.

"To see that principle now lost in the United States feels like a loss for women everywhere," she said. "When there are so many issues to tackle, so many challenges that face women and girls, we need progress - not to fight the same fights and move backwards."

The problem of accessibility.

As for back home in Australia, there's another major threat to women's reproductive rights - and it has to do with accessibility. Yes, in most states and territories it is legal to have an abortion (with various stipulations in mind), but that doesn't mean it is accessible to everyone.

We are still a long way from treating abortion as routine healthcare.

As Jamal Hakim - the Australian Managing Director of MSI Reproductive Choices - said: "In Australia, abortion access remains a postcode lottery. More and more people can't afford services, funding is minimal and the systems are disparate and vastly different across the country."

Hakim also noted that in Australia, a concerted effort to maintain and improve bodily autonomy will be key to cementing a better future.

We rightly condemn the US for making abortions illegal. In Australia, we just limit access.
There are whole areas in Australia where it is impossible to get an abortion.
Once again, this affects poorer women who don't have means to travel long distances.#RoeVsWade

Australia is within days of decriminalising abortion in every state. But the debacle in the US reminds us that women’s rights are equivocal in patriarchy. We must fight to win them & then fight to keep them. https://t.co/OMvC1Fh9o3

A lot of public hospitals also do not offer abortion care. Instead, private clinics provide abortion services, leaving pregnant people to pay hundreds of dollars out-of-pocket - as for rural areas in Australia - abortion services are even more limited or practically non-existent.

Plenty of Australian women have also been sharing their stories and advocating for greater access to abortion in Australia.

Mamamia's co-founder Mia Freedman shared her experience of getting an abortion. As she wrote: "I've had two actually, a few years apart in my early twenties. Both times I fell accidentally pregnant to men who were terrible. One was an emotionally abusive drug addict. The other was a compulsive liar who cheated on me."

Media personality Abbie Chatfield shared on Saturday that she cried herself to sleep after heading the news of Roe v. Wade being overturned.

"As someone who has had an abortion, it made me sick," she said. "Thankfully, I had access to safe abortion literally the day after finding out that I was pregnant. I remember not sleeping the night before the procedure, worried that I had missed the cut-off date, and I would have to carry a child to term. I was 23, and had a decent job, but I did not want a child, and that was reason enough. It wasn't an easy decision but it was the right decision."

Model and former Miss Universe Maria Thattil also shared her story. She said she was 21 when she had an abortion, saying "there isn't a single day that goes by where I am not grateful that I could safely access the procedure and healthcare for my circumstances."

Model Robyn Lawley also shared her experience via Instagram, alongside an image of 'My Body, My Choice.'

"I became pregnant and had to make the decision of abortion - it was a horrible hard decision to make, however I knew my body was unable to carry another. That decision is the mother's to make, and although mine was a medical decision, if you are not ready to become a mother that should also be counted," she said.

"I of course would fly home to Australia, I have the means - what would a 19-year-old woman do that's unemployed and homeless?…. go to jail or risk her life! This cannot happen! Please do not risk the lives of women so abhorrently!"

In Australia, what we can do is show our solidarity by marching, voting and donating where we can.

Reply
Upvote
2 upvotes
Jane Caro is right. We can never become complacent when it comes to our basic human rights. We must always be ready for a fight because there are so many here that want to interfere with the right to bodily autonomy and force people into pregnancy.
M
mb1111 2 months ago