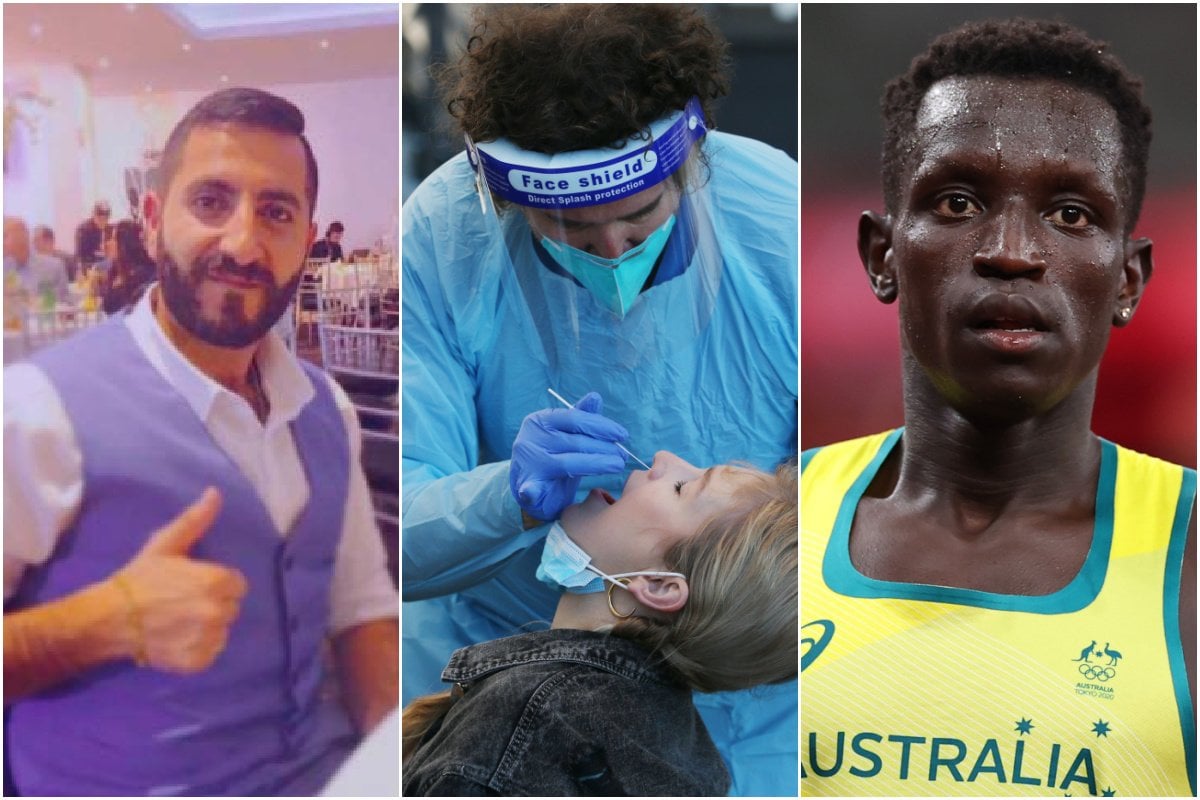 COVID-19 case numbers in NSW are expected to worsen further, with a 27-year-old man the latest fatality linked to the current outbreak.

Aude Alaskar collapsed in his southwest Sydney home and died on Tuesday, making him among the youngest victims of the pandemic in Australia since it began in 2020. He was not vaccinated.

Mr Alaskar's football coach and longtime friend Senan Sharif told AAP his friend was a "gentle man, a guy with a smile, he always helped people".

He had recently wed.

A man who died in his Sydney home after contracting COVID-19 has been identified as 27-year-old Aude Alaskar. #7NEWS https://t.co/frCFht42ts

An unvaccinated woman aged in her 80s also died in hospital on Tuesday, taking total deaths since mid-June to 17.

The state recorded 233 new local COVID-19 cases in the 24 hours to 9pm on Tuesday. At least 68 were in the community while infectious.

Based on that number, Premier Gladys Berejiklian believes case numbers will get worse. But the premier rebuffed criticism that she had not shut down retail outlets like hardware store chain Bunnings.

The Reject Shop, also the subject of debate, has hit back at claims its stores should not be open in Greater Sydney.

NSW officials have repeatedly said the main sites of transmission are households and workplaces.

Meanwhile, Premier Gladys Berejiklian is backing away from her plan to send year 12 students back into classrooms after prioritising them for the Pfizer jab. She has now said face-to-face contact will be based on the risk of COVID-19 transmission where they live.

Queensland's biggest COVID-19 outbreak since the first wave in 2020 is expected to grow as the state's southeast aims to emerge from lockdown in four days' time.

The cluster centred in Brisbane's western suburbs is currently at 63 cases after another 16 were added on Wednesday.

Daily case numbers have only increased since the lockdown came into effect last Saturday, but authorities are hopeful of lifting those restrictions by the end of the weekend.

They are pleading with Queenslanders from the Gold Coast to Noosa to only go out for essential items, and even consider limiting online shopping.

"If we don't do something really, really special in Queensland, we'll be extending the lockdown, so please ... try your absolute hardest to stay at home," Chief Health Officer Jeannette Young said on Wednesday.

There are now almost 200 COVID-19 exposure sites for close and casual contact across southeast, central and far north Queensland.

Victorian health authorities are racing to trace the movements of a Melbourne teacher, with fears she may have been infectious in the community for a week before testing positive for the virus.

A testing blitz began on Wednesday after a female teacher at Al-Taqwa College in Truganina tested positive for COVID-19.

Three Melbourne schools have now shut their doors as Victoria braces for additional exposure sites after a teacher at Al-Taqwa College contracted COVID-19. Follow our live coverage with @BroedeCarmody. https://t.co/9ZMQ6lNC1i

The school has been temporarily closed with more than 2000 students and 300 staff ordered to get tested and isolate.

The teacher, aged in her 20s, is currently isolating and being interviewed by contract tracers, with urgent investigations underway into how she contracted the virus.

She lives in the Hobsons Bay area with her husband, who was also undergoing testing on Wednesday night.

South Australia has reported one new COVID-19 case linked to a local cluster but will push ahead with plans to ease virus restrictions.

The case was revealed on Wednesday, more than two weeks after the outbreak first emerged and takes the number linked to the cluster to 22.

Chief Public Health Officer Nicola Spurrier said the positive test involved a man in his 20s who was the family member of a previously confirmed infection.

He was already in home quarantine with confirmation of his case coming after a relatively long incubation period.

From Thursday morning, SA is relaxing the general density requirement in most venues to one person to every two square metres.

Changes to the Activities Associated Direction coming into effect at midnight are outlined at https://t.co/JBOgGk6kEH pic.twitter.com/4AaKfHqxSJ

Sports competition can resume with spectator numbers at outdoor venues limited to 1000, but SA will keep mask-wearing in place for high-risk settings, high schools and most public places, including shopping centres.

Family gatherings will continue to be limited to 10 people, and weddings and funerals will stay at 50 people.

All food and drink consumption must be seated.

West Australians are being urged to get tested for the coronavirus amid fears a fly-in, fly-out worker may have been infectious while in the community.

The man in his 30s returned a "very weak" positive test result in recent days but has since tested negative.

He is in isolation and has not displayed any symptoms, having previously tested positive to the virus in March last year after returning from overseas.

The man worked as a maintenance contractor at Fortescue Metal Group's Cloudbreak mine in the Pilbara between July 20 and July 27 and went on to attend venues in Fremantle, Scarborough and Subiaco.

This is a highly unusual and fast developing situation.
WA Health are working on a list of potential exposure sites, and these will be added to the website as the information is finalised.

"The best explanation we have for his weak positive test result is that he probably acquired it from the airport through some sort of casual contact.

"We think he was positive over the course of the last 16 days ... (but) there's a strong prospect he wasn't infectious because he was COVID-positive early last year."

Peter Bol narrowly misses a medal in the 800m final.

Australia's Peter Bol has narrowly missed out on an Olympic medal, finishing fourth in the men's 800m final.

Bol was the first Australian to make the final of the 800m since Mexico City 1968.

He gave himself every shot!

Australia did get gold in the sailing, with Mathew Belcher and Will Ryan taking out the men's 470, and we also scored bronze in the team pursuit on Wednesday at the track cycling.

Coming up on day 13, the Boomers will have to beat Team USA to reach the gold-medal match and the Kookaburras are going head-to-head with Belgium in the men's hockey final.

Older mothers on the rise in Australia.

More Australian women are having children later in life, with the number giving birth over 35 almost doubling in the space of two decades.

"The average age of all women giving birth in Australia has been rising, including for first-time mothers," AIHW spokeswoman Bernice Cropper said.

One quarter of all women giving birth in 2019 were 35 or over. Two in seven of those gave birth for the first time.

Stolen Generations survivors in the territories will be compensated through a $378.6 million redress scheme for Indigenous children forcibly taken from their families.

Survivors from the Northern Territory, ACT and Jervis Bay Territory will be able to apply for one-off $75,000 payments in recognition of harm caused.

Additional $7000 payments will be available to help individuals get support for their trauma.

Thousands of Stolen Generations survivors could see reparations payments as early as next year under a multi-million dollar scheme announced by the federal government. https://t.co/JNcxQpdFWv

Each survivor will also be given the chance to detail the consequences of their forced removal in a confidential session with a senior government official.

If survivors choose to do this, they will receive a face-to-face or written apology.

WHO wants world to hold off on booster jabs for now.

The World Health Organisation is calling for a halt on COVID-19 vaccine boosters until at least the end of September, its head Tedros Adhanom Ghebreyesus says, as the gap between vaccinations in wealthy and poor countries widens.

The call for a moratorium is the strongest statement yet from the UN agency at a time when countries deliberate the need for boosters to combat the fast-spreading Delta variant of the coronavirus.

"I understand the concern of all governments to protect their people from the Delta variant. But we cannot accept countries that have already used most of the global supply of vaccines using even more of it," Tedros added.

High-income countries administered about 50 doses for every 100 people in May and that number has since doubled, according to the WHO.

Low income countries have only been able to administer 1.5 doses for every 100 people due to lack of supply.

The WHO chief has previously criticised plans to give children COVID-19 vaccines, arguing that doing so now comes at the expense of health workers and high-risk groups in other countries.

Coronavirus cases worldwide surpassed 200 million on Wednesday, according to a Reuters tally.

- A wildfire is endangering the ancient village of Olympia on the Peloponnese peninsula in Greece.

The Greek Ministry of Civil Protection on Wednesday afternoon ordered Olympia's residents to leave the village, which is famous for the Olympic flame lighting ceremony held there every four years.

- The Pfizer vaccine is being made available to all 16 and 17 year olds in the UK.

- The Duchess of Sussex has marked her 40th birthday in California, launching a new project to help women return to the workforce post COVID.