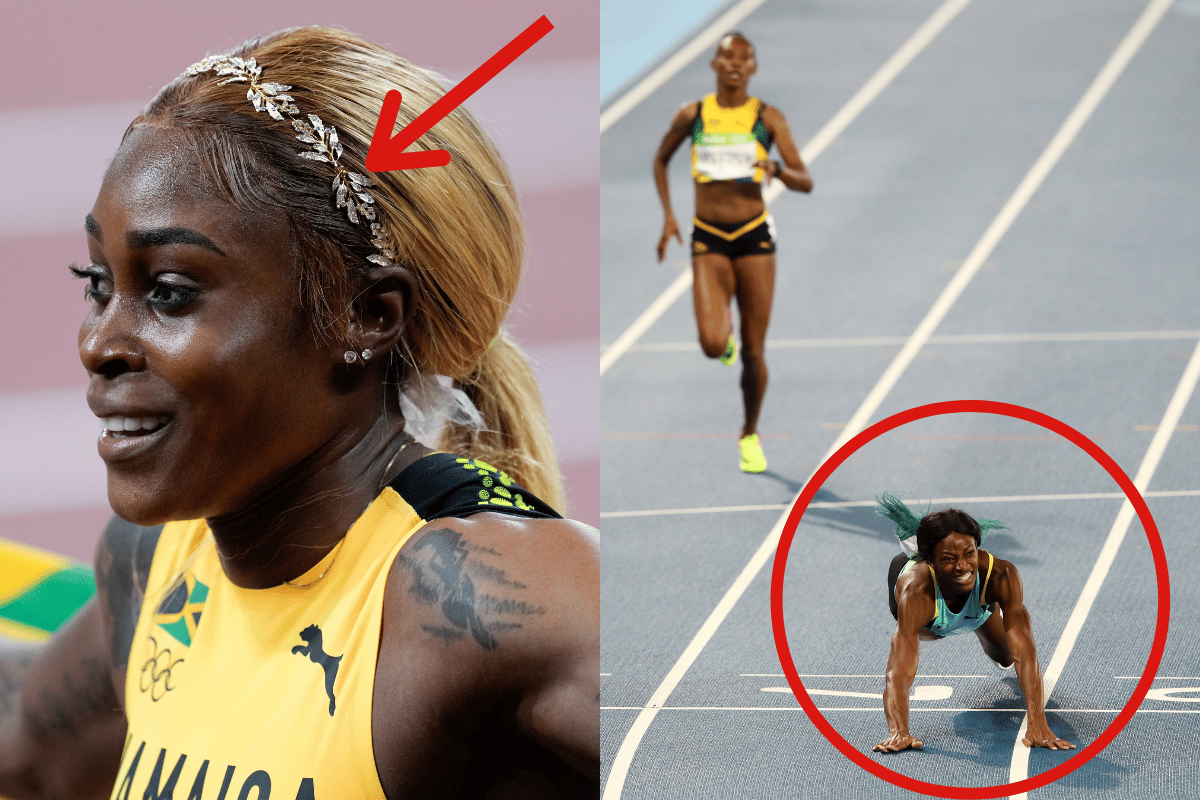 The Olympics are providing a much-needed distraction from everything going on right now. And we've very much here for it.

Last week, we watched Aussie swimmers (particularity the women) win medal after medal in the swimming pool and now we're watching our best athletes battle it out in track and field.

Listen to this episode of Mamamia Out Loud, where Holly, Mia and Jessie recap of some of the weirder side of the Olympic games. Post continues after podcast.

But as some of the early athletics events get underway, we've started to ask ourselves some questions.

Like what happens when an athlete knocks over a hurdle? And doesn't wearing jewellery during the 100m sprint slow you down??

Instead of pondering them to ourselves for the next week, we decided to answer them for you.

1. What's the go with false starts?

False starts are a big no-no at the Olympics.

Under the current rules, if an athlete jumps the guns and false starts they are automatically disqualified. There are no second chances.

But this didn't always used to be the case.

Before 2010, a false start would simply result in a warning for the entire field. Then, if a second false start occurred, the athlete who jumped the gun would be disqualified.

This was a little problematic because it meant that one athlete could false start and everyone would receive a warning. But a second and completely different athlete who false started would instantly be disqualified.

As a result, it's been speculated some runners could use the rule to their advantage and purposely jump the gun to distract other faster runners.

This reason, plus the fact that false starts lead to scheduling issues, led to the rule being changed.

﻿2. Are athletes allowed to knock over a hurdle and keep going?

Yes, they are (as long as it's not intentional).

If athletes intentionally knock over hurdles, they will be disqualified. But if they accidentally send one tumbling to the ground, they're allowed to keep racing.

Obviously, it's not in the athlete's best interest to hit one though.

For one, knocking over a hurdle can cause an athlete to lose momentum and slow down. And two, it may cause the athlete to fall over with it. 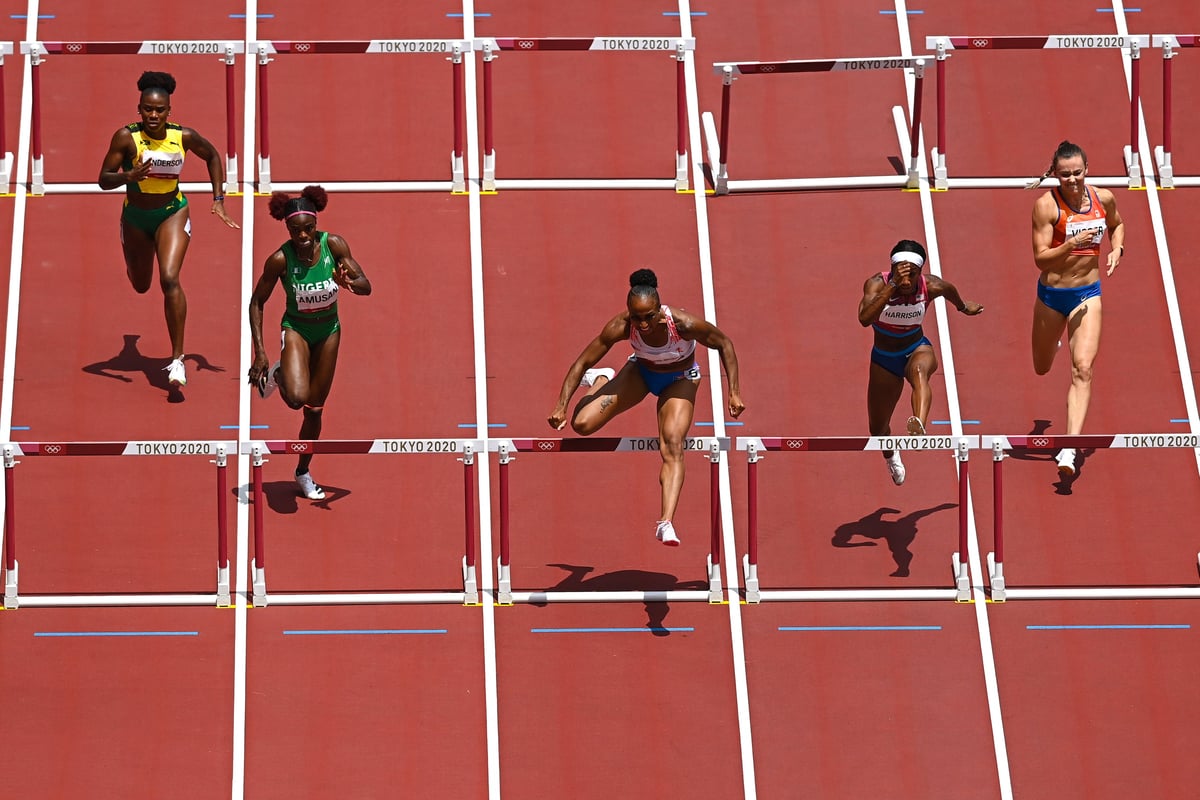 ﻿3. What happens if athletes run outside of their lane?

This one is a little more complicated.

For sprint and hurdle events, runners must stick to their assigned lanes. If they run outside their lane, they could be disqualified.

But there are different rules for different circumstances. For example, if an athlete is forced to run outside their lane because of another person and no advantage is gained, they won't be disqualified.

In the 800m, runners need to stay within their lanes through the first turn, then they can break position and run in the inside lane. There are no lane assignments in the 1500m, steeplechase and other distance races.

4. Doesn't wearing jewellery in the 100m sprint slow you down?

You'd think so. But, obviously not.

Over the years, both male and female runners have been spotted wearing earrings, necklaces, rings, bracelets and headbands during sprints. Even Usain Bolt rocked a gold chain when he won the men's 100m final at the Rio Olympics.

Just over the weekend, Jamaican runner Elaine Thompson-Herah won gold in the women's 100m final and set a new Olympic record all while wearing earrings and a sparkly headband to match. We love to see it. Unlike the rules around jewellery, restrictions around footwear a lot more strict.

So your old Dunlop Volley's from high school probably won't make the cut.

6. Can runners dive across the finish line?

If you've ever wondered why runners lean forward when they cross the finish line, it's because their torso needs to cross the line in order to finish.

So that raises the question, can runners just dive across the finish line? And yes, yes they can.

Under the Olympic rules, it is completely legal for runners to dive across the finish line, but they obviously risk getting hurt in the process.

In fact in 2016, Bahamian sprinter Shaunae Miller just beat out American sprinter Allyson Felix in the women’s Olympic 400-metre sprint because she dove belly first across the finish line.

It may not have been the most comfortable landing, but she did win gold. 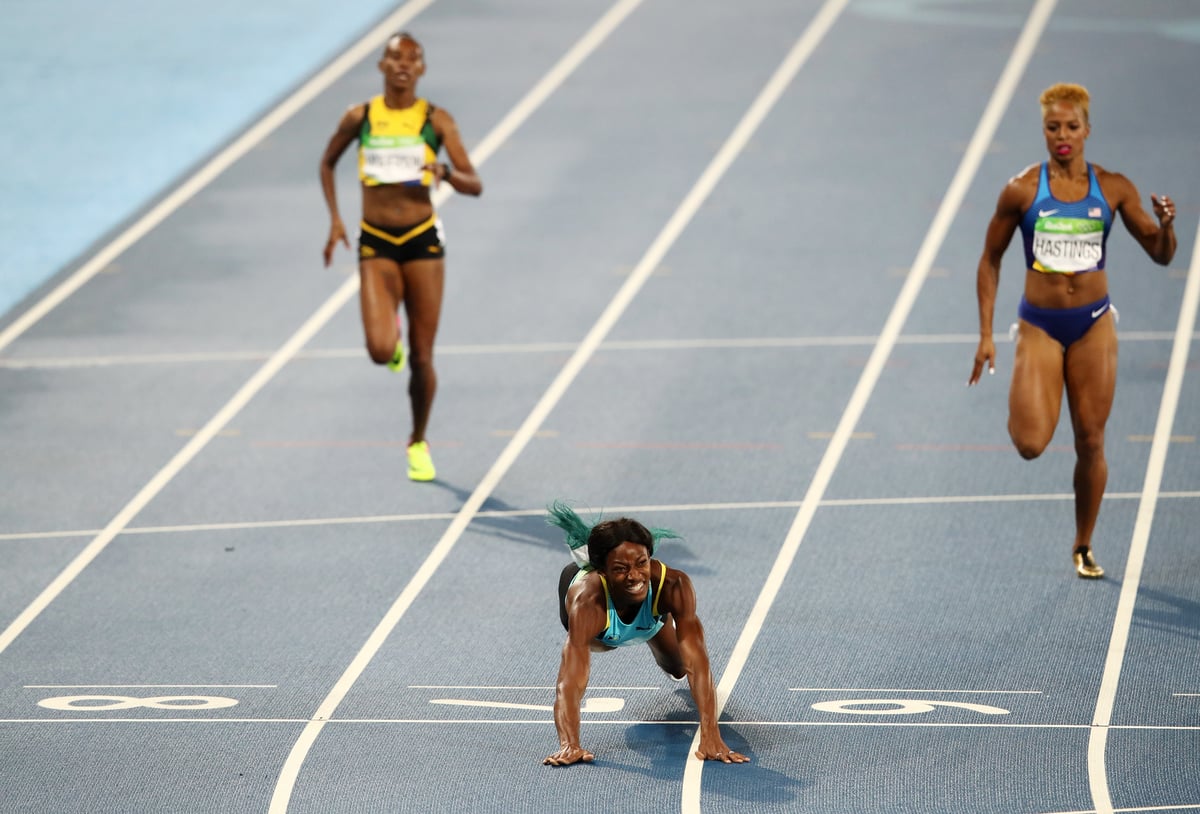 Shaunae Miller dives over the finish line to win the gold medal in the Women's 400m Final at the Rio 2016 Olympic Games. Image: Getty.

Do you have any other Olympic questions for us? Ask us in the comments below!