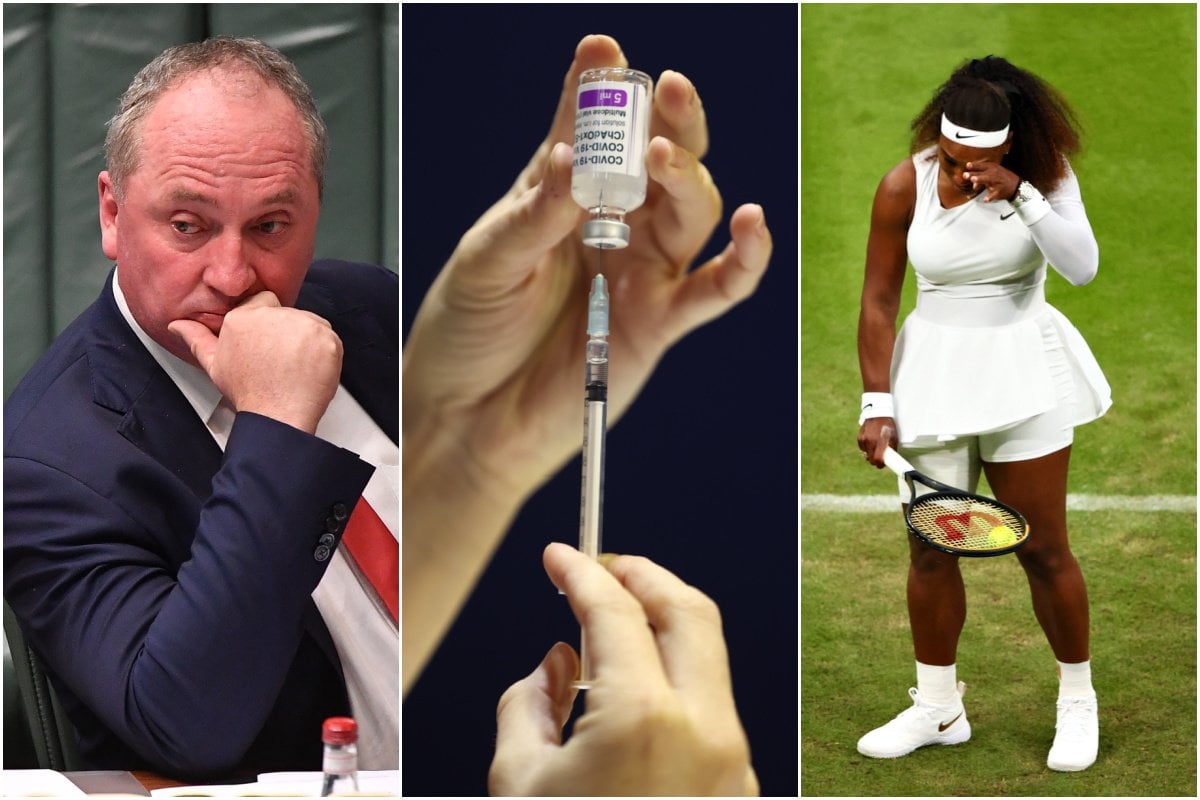 The federal government has provided doctors with legal protection to provide the vaccine to adults of all ages, sparking a rush of younger people keen to have the jab.

The Australian Medical Association refused to endorse the decision with AstraZeneca only recommended for people aged over 60 because of rare but serious blood clots.

Are you confused about the government's updated COVID vaccine policy? Share your questions with us in the comments. #9Today pic.twitter.com/eh6XmhFWv8

Mr Hunt rejected suggestions the government had overhauled its vaccination strategy to speed up the rollout.

"There's simply a recognition that the access for those who wish to make an informed, consent decision can be broad and consistent with the supply," he told reporters in Victoria.

Just over seven per cent of Australians have been fully vaccinated against the disease with outbreaks locking down millions of people across Sydney, southeast Queensland, Perth, Darwin and Townsville.

People willing to take the AstraZeneca shots are able to do so after consulting with their GP.

Royal Australian College of General Practitioners president Karen Price said doctors were still trying to get their heads around the announcement.

"Phones are ringing off the hook at GP clinics," she said.

"We had no warning of last night's announcements and this isn't the first time this has happened to general practice."

State premiers are reluctant to endorse the decision, which Scott Morrison announced after a meeting of national cabinet.

Less than a week after being sworn in as deputy prime minister Barnaby Joyce has had a run-in with the law after he was dobbed in for not wearing a face mask.

Crime Stoppers was alerted by a member of the public in the National leader's home town of Armidale on Monday morning after he was spotted without a face mask while paying for petrol after filling up at the bowser.

Police say they checked the service station's CCTV and issued a $200 fine to a 54-year-old man for breaching an order under the NSW Public Health Act.

Deputy Prime Minister Barnaby Joyce has copped a $200 fine for not wearing a mask indoors after being dobbed in by a member of the public in his electorate | @jennynoise https://t.co/5izPM4fFDx

"I was on my way to the airport, forgot about putting on the mask, bang 200 bucks," he said.

"We've all got to do the right thing, including politicians."

State Emergency Operations Controller, Deputy Commissioner Gary Worboys said it was just one of 34 COVID-19 infringement notices issued on Monday - with 16 of them infringements for failing to wear a fitted face covering.

"Police were alerted to that. They took some action. That person was apologetic and co-operative with police and an infringement notice was issued," he told reporters on Tuesday.

NSW Premier Gladys Berejiklian has hinted the state will likely remain under COVID-19 restrictions for far longer than 14 days, announcing another 19 cases on Sydney's fourth day of lockdown.

The number of new cases on Tuesday was just one higher than the previous day, but Ms Berejiklian warned numbers could spike in the next few days.

What is most concerning authorities, however, is the increasing transmissibility of variants of concern like the Delta strain.

That means some restrictions will have to stay, even after the current cluster is eradicated and Sydney ends its lockdown, she said.

NSW Health has been notified of a number of new venues of concern and bus routes associated with confirmed cases of #COVID19. pic.twitter.com/Oh72nf9bSo

"When you know that you've got such a transmissible variant ... you do need to look at what life looks like because what we want to do is prevent ever having to go into lockdown again."

NSW must get 80 per cent of its adult population vaccinated before having a conversation about what "COVID-normal" looks like, the premier said.

On the NSW mid north coast, a couple is facing assault charges after they allegedly started a fight after refusing to check in to a restaurant on Monday evening.

The 43-year-old man and 27-year-old woman were told they would have to leave the Forster restaurant if they didn't sign in using the QR code.

A Forster cafe owner was allegedly attacked by a customer who refused to wear a mask or check-in using the QR code system. #7NEWS https://t.co/g2VI4Y8FTt

The man punched the owner, leaving him with facial injuries and a suspected broken nose, police say.

The women allegedly bit a bystander who tried to intervene. He has bruising and bleeding to his bicep.

Millions of Queenslanders are in lockdown again amid fears an unvaccinated hospital worker from Brisbane may have spread the highly contagious Delta variant of COVID-19 to north Queensland.

The premier has expressed disbelief after learning the young woman was not vaccinated but continued to work shifts as a concierge stationed just outside the coronavirus ward of Prince Charles Hospital in Brisbane.

The 19-year-old tested positive on Monday but is believed to have been infectious in the community for about 10 days, and in that time worked two shifts at the hospital and went on a family holiday to Townsville.

Late on Tuesday, authorities confirmed she has the Delta variant. One of her close friends and two of her family members are also now ill, with her brother confirmed as testing positive. The concierge also had contact with three other hospital workers.

Large swathes of the state are now under a snap three-day lockdown until 6pm on Friday, when it will be reviewed.

The lockdown covers Townsville, nearby Magnetic and Palm islands, and all 11 local government areas in the state's southeast corner.

Premier Annastacia Palaszczuk will tell national cabinet that hotel quarantine poses the single greatest threat to Australia as the pandemic rolls on.

Her deputy Steven Miles has claimed half the people returning to Australia are not citizens or permanent residents, but others travelling on exemptions that are being liberally granted by the federal government.

AAP has been told other jurisdictions share Queensland's concerns and have not been given federal government data on exemptions, despite asking for it.

More than two million West Australians on Wednesday will wake to their second day of a four-day lockdown to combat a coronavirus outbreak linked to NSW.

There were no new locally acquired cases recorded on Tuesday when Perth and the Peel region were plunged into lockdown.

Mr McGowan said the lack of further infections was a good start in crushing the Delta-variant outbreak, "but there is still a long way to go".

He also announced a return of a hard border closure with Queensland in response to further local cases there.

Perth's lockdown was sparked after a second virus infection was revealed on Monday night, both linked to a woman who recently returned to WA from NSW.

The family of an infected worker from a central Australian mine are the latest Delta-variant COVID-19 positive cases recorded from an outbreak that's grown to 11.

The most recent cases in the Top End are the wife and daughter of the worker who left Newmont's Granites Mine, about 540km northwest of Alice Springs, on Friday.

"Our community here is really angry about what's happened"

Townsville Mayor Jenny Hill says "it's not good enough" that her city has been plunged back into lockdown after COVID-19 leaked back into the community. pic.twitter.com/D8gUJM5lSC

"We can't be certain, but we are hopeful that the two new cases became infectious while isolating", he said.

"We are still very nervous, we're not close to relaxing yet, there is still a lot of worry.

"I'm planning for the worst-case (scenario)."

There are now 11 cases linked to the mine but only ten have been recognised by the NT government.

An infected close contact of one of the two mineworkers diagnosed in Queensland hasn't been included in the Tanami Desert cluster.

Darwin and its surrounding areas have been in lockdown since Sunday after a young Victorian man, who had travelled to the mine on June 18 via a Brisbane quarantine hotel, tested positive for the virus on Saturday.

Mr Gunner raised concerns for Darwin's itinerant population, many of whom are Indigenous people.

This week's release of the Intergenerational Report should be a wake-up call for Australia's politicians and the community more broadly, the Business Council of Australia says.

The five-yearly report that provides a guide for Australia's outlook projected budget deficits, slower economic growth and a smaller population over the next four decades as a result of the pandemic.

An ageing population also means that for each person in retirement there will be fewer people working, and that productivity continues to flounder - a concern that was evident even before COVID-19 hit Australian shores.

In response, the Business Council has released a discussion paper, Living on borrowed time: Australia's economic future, on what is needed to lift the nation's outlook.

"Anyone who thinks we can now just stay where we are is incredibly naive," the council's chief executive Jennifer Westacott told reporters ahead of the launch of the report on Wednesday.

"What we are trying to build is a bit of consensus to what is the direction we want to head in and what the big shifts are needed to get there."

The aim is to raise the debate around issues like actively building a low carbon economy, lifting the skills of the workforce, and making sure Australia remains an open and competitive economy while diversifying its industrial base.

Injured Serena Williams out of Wimbledon.

Serena Williams stopped playing her first-round match at Wimbledon after she hurt her left leg by slipping during a point, a sudden end to her latest bid for a record-tying 24th grand slam singles title.

Roger Federer's reaction when he found out what happened to Williams? "Oh my God, I can't believe it," he said, surely articulating a common sentiment.

Serena Williams forced to retire from first-round Wimbledon match due to injuryhttps://t.co/x6fgngPTbN

Meanwhile, world No.1 Ash Barty had to fight off a sterling effort from 32-year-old crowd favourite Suarez Navarro before winning 6-1 6-7 (1-7) 6-1, on what the Australian described as a "perfect day".

Nick Kyrgios has started his Wimbledon campaign with some trademark commentary. Down 0-3 in the third set he told the camera, "For those of you guys at home right now, this should be fast. It’s grass court tennis. This is slow. It’s slow."

He ended up securing his first round over Frenchman Ugo Humbert.

- Jacobabad, Pakistan has now officially passed, albeit briefly, a threshold hotter than the human body can withstand with temperatures reaching 52C. The area is considered one of the places most vulnerable to climate change.

- A 41-year-old Ford Escort given to Diana, Princess of Wales, as an engagement present by Prince Charles in 1981, has been sold at auction for almost $100,000.

- Australian scientists have helped find two massive star-eating black holes which have been likened to the video game character Pac-Man. The observations will help unlock some of the most complex mysteries of the universe including the building blocks of matter and the workings of space and time.