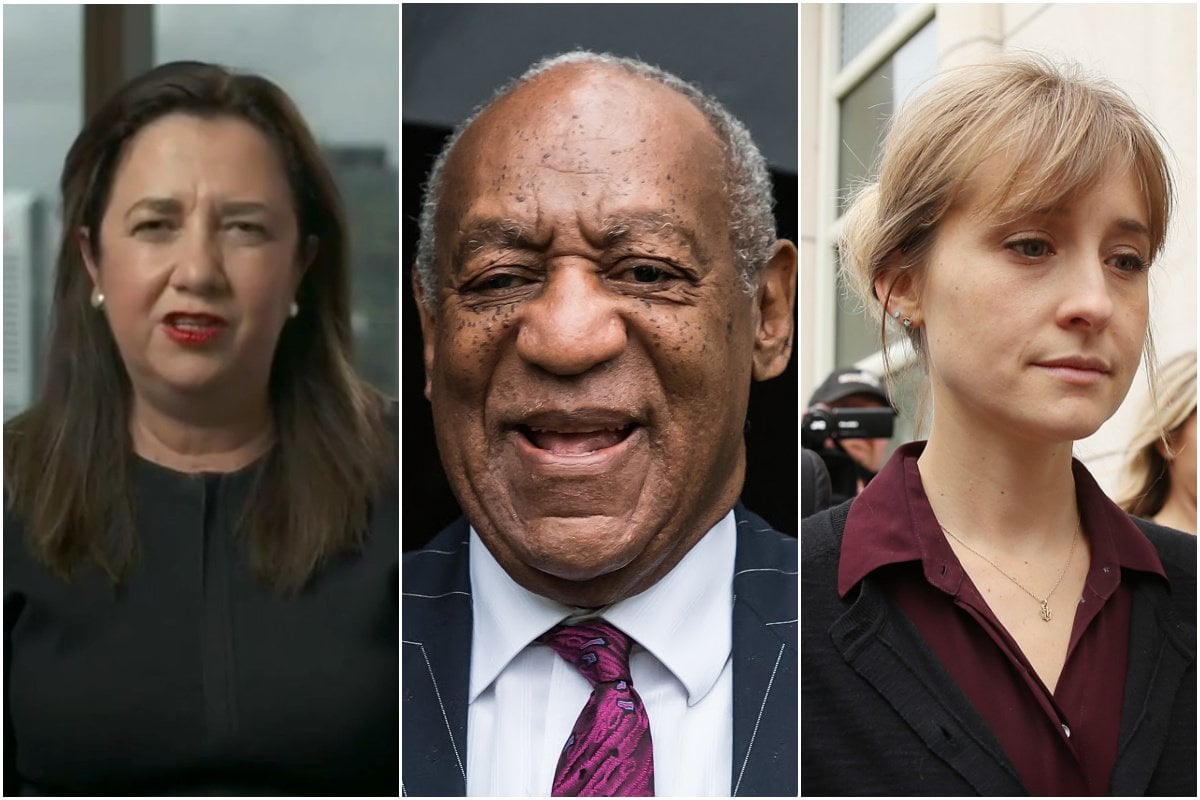 The Morrison government is under fresh pressure over its vaccine rollout after state leaders warned against younger people taking the AstraZeneca shot.

Prime Minister Scott Morrison has highlighted a path for any adult to receive the jab after talking to their GP about the risks of extremely rare blood clots.

But state premiers and chief health officers are warning against ignoring advice from the Australian Technical Advisory Group on Immunisation.

"Australians under 60 who want AZ should contact their GP who can advise on the risks and benefits as outlined by ATAGI. Government has now funded longer consults for this discussion and then vaccination if required."
(2/2)

It is not recommended for people under 60 to receive AstraZeneca, with Pfizer the preferred vaccine for that age group.

"Unfortunately the prime minister's thrown a little bit of a hand grenade into our vaccine program," he told Sky News.

The federal government has provided doctors with legal protection to vaccinate adults of all ages, sparking a rush of younger people keen to have AstraZeneca.

Queensland Chief Health Officer Jeannette Young said she did not want people under 40 to receive the jab.

"I don't want an 18-year-old in Queensland dying from a clotting illness who, if they got COVID probably wouldn't die," Dr Young said.

It can be hard to keep up with the latest on Australia's vaccine rollout. Let's pause and check in with Australia's most-talked-about jab. https://t.co/2kCKyeTdDv

"The last thing we need is confusion around vaccines. What we need is certainty and consistency and confidence in the vaccination program," said Victorian Health Minster Martin Foley.

"That is the advice we have and that is the national advice from the immunisation experts," he said.

"Clearly, the Commonwealth has taken a different approach."

More than 100 patients and staff are isolating amid fears of a coronavirus outbreak at two Sydney hospitals after a student nurse worked for five days while infectious.

NSW recorded 22 new local coronavirus cases in the 24 hours to 8pm on Tuesday, taking the tally for the outbreak that began on June 16 to 171.

All are linked to previous cases, but only 11 were in isolation for the entirety of their infectious period.

There have been 171 locally acquired cases reported since 16 June 2021, when the first case of the Bondi cluster, a driver who transported international flight crew, was reported. Of these, 160 are now linked to the Bondi cluster.

However, the state's health authorities are bracing for the possibility of an outbreak in the hospital system, after a student nurse was found to be coronavirus-positive after the 8pm deadline.

The 24-year-old Sydney woman worked for up to five days while infectious in Fairfield Hospital's rehabilitation ward and the cardiology ward and general abdominal surgery ward at Royal North Shore Hospital.

One of her household contacts has tested positive to the virus so far.

Dr Chant said the affected wards had been locked down and staff and patients tested almost immediately after the diagnosis, including patients who were recently discharged.

Public health alerts were also issued for another two Virgin flights, after a second flight attendant – a close contact of the first – tested positive to the virus in Queensland.

More than 12 million people are now under lockdown across NSW, Queensland, Western Australia and the Northern Territory thanks to outbreaks of the Delta virus strain.

Blame between state and federal politicians over Queensland's latest COVID outbreak has reached fever pitch, with the premier calling for overseas arrivals to be slashed by up to 75 per cent.

In an interview with ABC's 7.30 on Wednesday night, Annastacia Palaszczuk doubled down on her criticism of the federal government's management of quarantine and the vaccine rollout, saying it had let Australians down.

"We have had... a magical moment in time we are never going to get back, where we could have had the entire population vaccinated before the virus arrived in this way," she said.

"The federal government is responsible for quarantine and the supply of the vaccine and they have let the population of Australia down." - Qld Premier @AnnastaciaMP. #abc730 #auspol pic.twitter.com/5ecp7BNwr9

In a fiery press conference earlier on Wednesday, the Queensland premier and her deputy Steven Miles called for a drastic reduction in the number of overseas arrivals.

The pair say they were frustrated to learn the outbreak - which has resulted in lockdown for millions of Queenslanders - had been sparked by an unvaccinated traveller who made repeated trips between Australia and Indonesia.

The man infected a receptionist at Brisbane's Prince Charles Hospital.

Alice Springs is waking to its first full day of lockdown after a Delta variant COVID-19 outbreak that started in a central Australian mine grew by five.

More than 25,000 people in Alice Springs were ordered to lock down for 72 hours from 1pm local time on Wednesday.

"We are still in a dangerous period. The territory is still under threat," Mr Gunner said.

No new COVID cases recorded in NT, but Alice Springs to go into lockdown https://t.co/oU4vmXFGk6

The health direction applies to everyone inside the Alice Springs town council boundary, including hundreds of Indigenous Australians living in camps.

"Rough sleepers are among the most vulnerable," Mr Gunner said.

He said to stay put, and that food, face masks and blankets would be provided.

"We're working closely with the (Central Australian Aboriginal Congress) and the council to make sure you're safe," Dr Heggie said.

The crisis started on Saturday when a young Victorian man, who travelled to the mine on June 18 via a Brisbane quarantine hotel, tested positive for the virus.

Hundreds of fly-in, fly-out mine workers travelled to NSW, Western Australia, Queensland, South Australia, Victoria, Tasmania and New Zealand in the days after he arrived.

There are so far understood to be 16 cases linked to the outbreak.

South Australia has joined other states and territories in reporting new coronavirus infections but has avoided a lockdown with officials hopeful the outbreak is under control at this stage.

SA reported five new local cases on Wednesday involving a miner who recently returned from the Northern Territory, his wife and three of their children, all aged under 10.

The family was in isolation since the man's return giving authorities some confidence there will be no further community transmission.

However, SA Health is urgently retesting 28 other miners who returned from the same site last week.

They all returned negative results with their first tests.

Premier Steven Marshall says the new cases are a "concerning turn of events" but the family involved had done the right thing.

"South Australia is not going into a lockdown and I think many people will be extraordinarily relieved about that," he said.

Bill Cosby has been freed from prison less than two hours after Pennsylvania's highest court overturned his sexual assault conviction, saying he never should have faced charges after striking a non-prosecution deal with a previous district attorney more than 15 years ago.

The Pennsylvania Supreme Court issued its split decision after Cosby had served more than two years of a three- to 10-year sentence following his 2018 conviction.

Cosby, 83, was released from a state prison in Shippack, Pennsylvania, just before 2.30pm local time, a corrections department spokesperson said.

He was seen driving away in a white SUV.

The comedian and actor was best known for his role as the lovable husband and father in the 1980s television comedy series The Cosby Show, earning him the nickname "America's Dad".

But his family-friendly reputation was shattered after dozens of women accused him of sexual assault over a period of decades.

His conviction was widely seen as a watershed moment in the MeToo movement that brought forth an array of allegations against powerful men in Hollywood and beyond.

As a reminder, AT LEAST FIFTY-EIGHT WOMEN accused Bill Cosby of sexual assault. 58!

Thank you to all those who had the courage to speak up and seek justice. It was not in vain. He served two years. We all know what he did. Ant they made it easier for other women to come forward. pic.twitter.com/XwlG8XFHJ5

Cosby was found guilty of drugging and molesting Andrea Constand, an employee at his alma mater Temple University, in his home in 2004.

Constand's allegations were the only ones against Cosby that were not too old to allow for criminal charges.

Montgomery County District Attorney Kevin Steele, who filed the charges against Cosby in 2015, issued a statement noting that a jury found Cosby guilty and that Wednesday's decision was not based on the facts of the case.

Mack, 38, was sentenced by US District Judge Nicholas Garaufis in Brooklyn.

She pleaded guilty in 2019 to racketeering and conspiracy.

Actor Allison Mack, who became a key figure in the NXIVM cult led by convicted sex trafficker Keith Raniere, has been sentenced to three years in federal prison. https://t.co/nBMAahRSae pic.twitter.com/8AlHZfWrzd

Before being sentenced, Mack tearfully apologised to her victims and her family, calling her actions "abusive, abhorrent and illegal".

Former members testified at NXIVM leader Keith Raniere's trial that he established a secret sorority within the group in which women were kept on starvation diets, branded with Raniere's initials and in some cases ordered to have sex with him.

Leaders of the group, including Mack, were said to use nude photos and other compromising materials to coerce members into complying.

In her guilty plea, Mack admitted that she coerced two unnamed women into doing work for the group by threatening to release damaging information about them.

Split along party lines, the House of Representatives has launched a new investigation of the January 6 US Capitol riots, approving a special committee to probe the violent attack as police officers who were injured fighting former president Donald Trump's supporters watched from the gallery above.

The vote to form the panel was 222-190, with Republicans objecting that majority Democrats would be in charge.

The action came after Senate Republicans blocked creation of an independent commission that would have been evenly split between the two parties.

BREAKING: House approves a select committee to investigate the Jan. 6 attack on the U.S. Capitol, with nearly all Republicans voting against. https://t.co/Xa04s7h4jI

Emphasising the importance that Democrats attached to the vote, House Speaker Nancy Pelosi told lawmakers in the chamber: "We will be judged by future generations as to how we value our democracy."

Wyoming Representative Liz Cheney, who lost her position in the Republican leadership because of her criticism of Trump, was one of only two from the party to vote for the panel.

She declared, "Our nation, and the families of the brave law enforcement officers who were injured defending us or died following the attack, deserve answers."

Nick Kyrgios says that not even a "brutal" fall which left him squirming in agony was going to stop him continuing his Wimbledon campaign.

After overcoming a nasty fall on the Court No.1 turf and rising to win his battle with Frenchman Ugo Humbert on Wednesday, Kyrgios declared: "With one leg, I was going to finish that match."

"Probably should never ask me that question ever again."

Nick Kyrgios WON his epic Wimbledon five-setter - then got quizzed about the tournament's hottest topic. https://t.co/T8mt7Bmrmq

"Not bad for a part-time player," he couldn't resist joking with the cheering crowd.

Meantime, Venus Williams has been knocked out of the second round at Wimbledon singles, a day after her sister retired injured after a first round fall.

- Former US president Donald Trump will visit the US-Mexico border as he seeks to reclaim the spotlight, riding a wave of Republican attacks on his successor Joe Biden over the rise in migrants caught entering the United States.

- European Union governments have agreed to add 11 other countries to the list of nations from which they will allow non-essential travel.