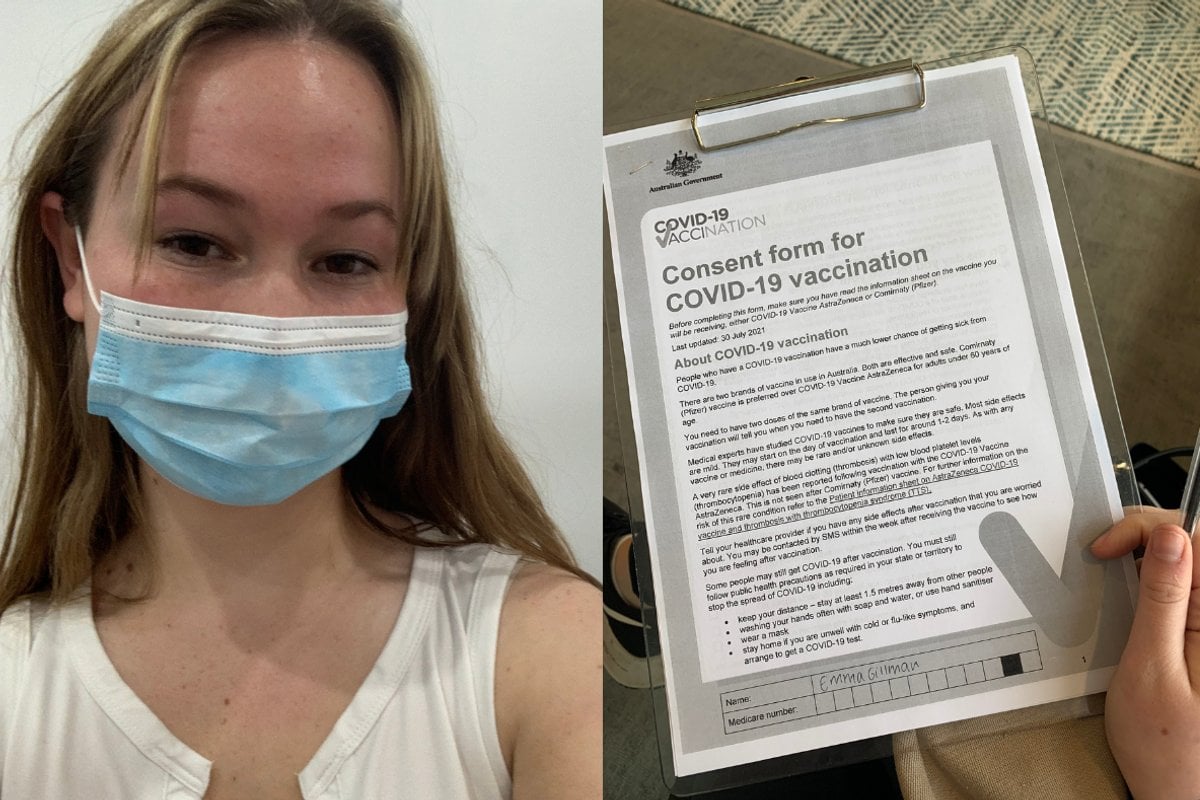 Just over a week ago, my Sydney-based housemates and I settled in to our living room couch as was ritual for Gladys' 11am press conference when an exhausted NSW Premier announced that our state had recorded 239 cases in the previous 24 hours.

It was our highest number to date.

Of course, since then we've hit 319 as a daily "record", but at the time, I remember that 239 number feeling particularly biting.

Another month of lockdown loomed ahead, and that naive optimism I'd been keeping up faded very fast.

I cycled through anger and denial. How was it possible? We were coming up on one month inside, but the cases just kept rising.

Dr Kerry Chant called for people over the age of 18 to consider getting the AstraZeneca vaccine and, although I'd managed to book an appointment for Pfizer at the very end of September, I defiantly told my housemates, through tears: "I'm getting AstraZeneca. I can't wait any longer."

Listen: On this episode of The Quicky, we talk vaccine passports. Post continues below.

As a person under 40, all the way through this pandemic, I've felt pretty useless.

But for a good while there, I was being encouraged to get a vaccine that I was ineligible for.

Then one morning, Dr Kerry Chant asked me to do my bit, and frankly, I felt a wave of relief to know there was something I could do to get us out of this mess a little quicker.

So, following the press conference of course, I locked myself in my room, allowing myself to leave only once I had all the necessary information about AstraZeneca, and an appointment sorted.

How did I book my vaccine?

First, I called my local pharmacy to book an appointment, but they didn't stock the vaccine yet.

The helpful lady on the phone told me I could see which clinics stock the vaccine through this link, and after a few clicks, a map popped up showing me all the locations available for an appointment as early as that very day.

I called my local doctor's office, and they had me booked in for just two days later.

What happens in the COVID-19 AstraZeneca Vaccine appointment?

I arrived at the clinic 10 minutes early, and the receptionist handed me a few forms to fill out about my medical history, as well as some information on the AstraZeneca vaccine.

While I was sitting in the waiting room I saw three other young people filling out their forms which obviously made them all very attractive.

I felt smug for us.

Then, as another young person came out, bandaid on arm, I went in to chat to the doctor.

Despite feeling fairly nervous in the lead up to my appointment, I quickly felt comfortable that I was making the right decision.

The vibe in the doctor's office was hopeful and rational.

After about a month of being in lockdown, I'd never felt so connected to the community. We were all putting ourselves through a bit of discomfort for the greater good.

The doctor laid out all the facts on risks and benefits of the AstraZeneca vaccine and left it to me to make my decision, which to me, felt like a no-brainer.

I asked her if she had any patients decide against receiving the AstraZeneca vaccine after their consult, to which she told me: "Oh absolutely."

"Those people are thinking with their emotions, though," she clarified.

"Any person who has considered it logically and based on the numbers would get it without question or doubt."

And what are those numbers?

Well, the risk of developing Thrombosis with thrombocytopenia from the vaccine, is about 2 in 100,000. That is far less than your risk of dying in a car accident in the next year.

The risk of fatality drops even further, to 3 per cent of people who develop the condition.

A.K.A. less than a one in a million chance.

These are very real and severe side effects, but it must be noted that they are rare.

At this point I gave my informed consent, and my doctor went to grab the old Ay-Zee from her fridge.

I'm not going to lie, I really hate needles, so I wasn't looking forward to this part. But you'd be happy to hear this vaccine was as smooth as one could be.

I could barely feel it, and my housemate actually didn't feel hers, so interrogated the doctor to make sure it really happened.

Immediately afterward, I stood up feeling a little lightheaded (as has happened with previous vaccines), but I'm not sure how much of it was an 'adverse side effect' and how much was joyful delirium for doing the right thing.

I thanked my doctor, sat in the observation room chattering away to the receptionist for 15 minutes, and then I left my appointment feeling good.

I even had a little cry in the car on the way home as it was such a huge relief. 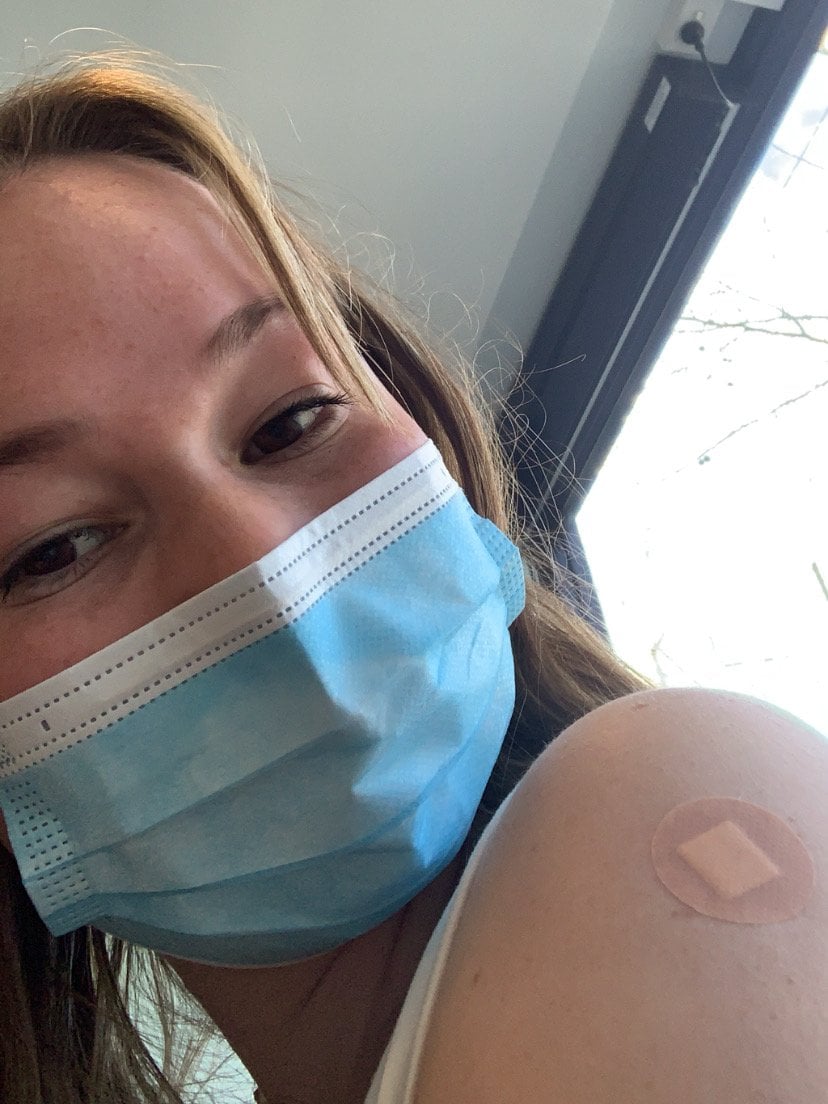 I think somewhere along the way, amid ever-changing health advice and words like 'vaccine-hesitancy' I lost sight of the fact that getting vaccinated is our only way out of this pandemic.

In April last year we dreamed of a vaccine that could pull us out of these 'unprecedented times' and now it's here, available to all Australians over the age of 18, and plenty of us have sat back waiting for another option.

And who knows how long that will take?

So... what were the side effects of AstraZeneca Vaccine?

Well, I experienced a few.

About 10 hours after my vaccine I had some muscle pain kick in which was entirely expected thanks to a handy "after your COVID-19 vaccination" pamphlet that was given to me at the clinic.

I felt generally tired, a little swollen, and under-the-weather, but a bit of paracetamol went a long way in helping me through this.

Within 24 hours though, I was completely back to normal. Better than ever. 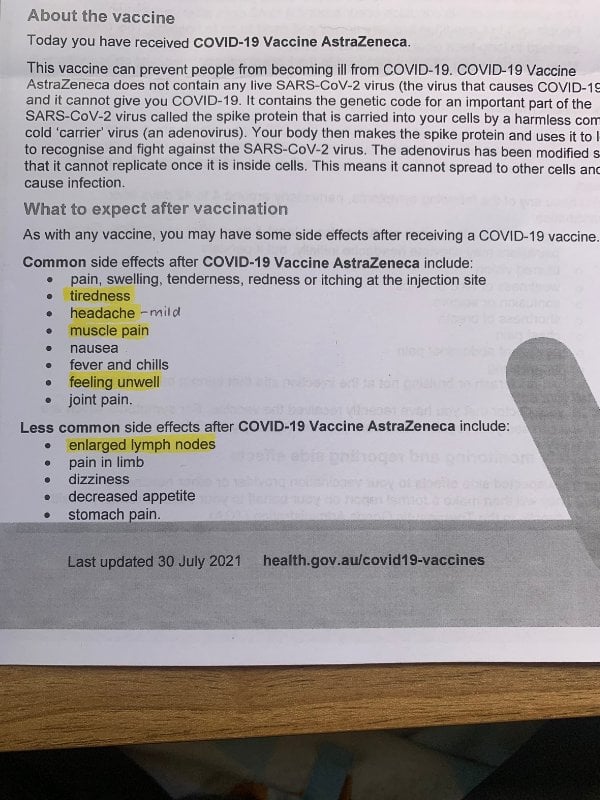 I highlighted some of the side effects I experienced here.

While one of my housemates (also 20) had a very similar experience, my other housemate (21) had absolutely no side effects, aside from a sore arm!

Okay... But why should you get it?

Gosh, where do I start?

Vaccination is the single best way to develop immunity and prevent COVID-19 disease.

Whether you are currently in a COVID-19 hotspot within Australia, or not, mass vaccination will be the key to preventing further lockdowns and travel restrictions.

But if, like me, you are in Sydney, the risk of contracting (and becoming seriously ill) with COVID-19 is far greater than the risk of vaccine complications.

The AstraZeneca vaccine is "very effective" in preventing serious disease and death to COVID-19.

But, facts aside, let me get a little emotional with you for a minute.

For me, the past (almost) 18 months have been filled with an ever-present feeling of guilt and fear. And obviously it's been f**king exhausting.

"Catching up" with my (half vaccinated) grandma has seen me standing six-feet away on the street, her face covered in a mask, gloves on and with a steady supply of sanitiser preventing any real contact.

She's rightfully terrified. I've seen her move out onto the road to avoid contact with unmasked people while on her daily walks. And I hate to see it. 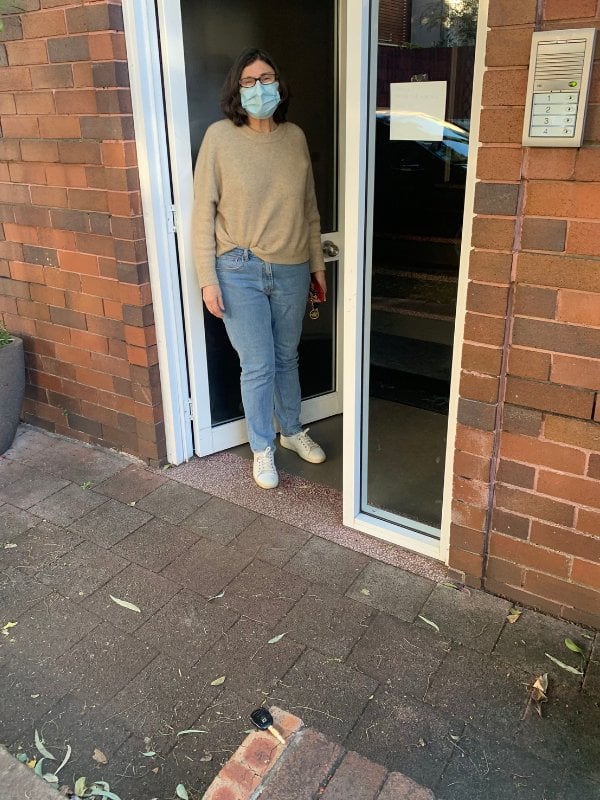 My grandma, greeting me at the door on my walk past her place. Image: Supplied.

So please, if you're able, just get the damn vaccine.

For the elderly. And the not-so-elderly.

For your parents and friends.

And go right ahead: be super smug about it. A post on Instagram won't hurt. You're doing the right thing and I can't thank you enough.