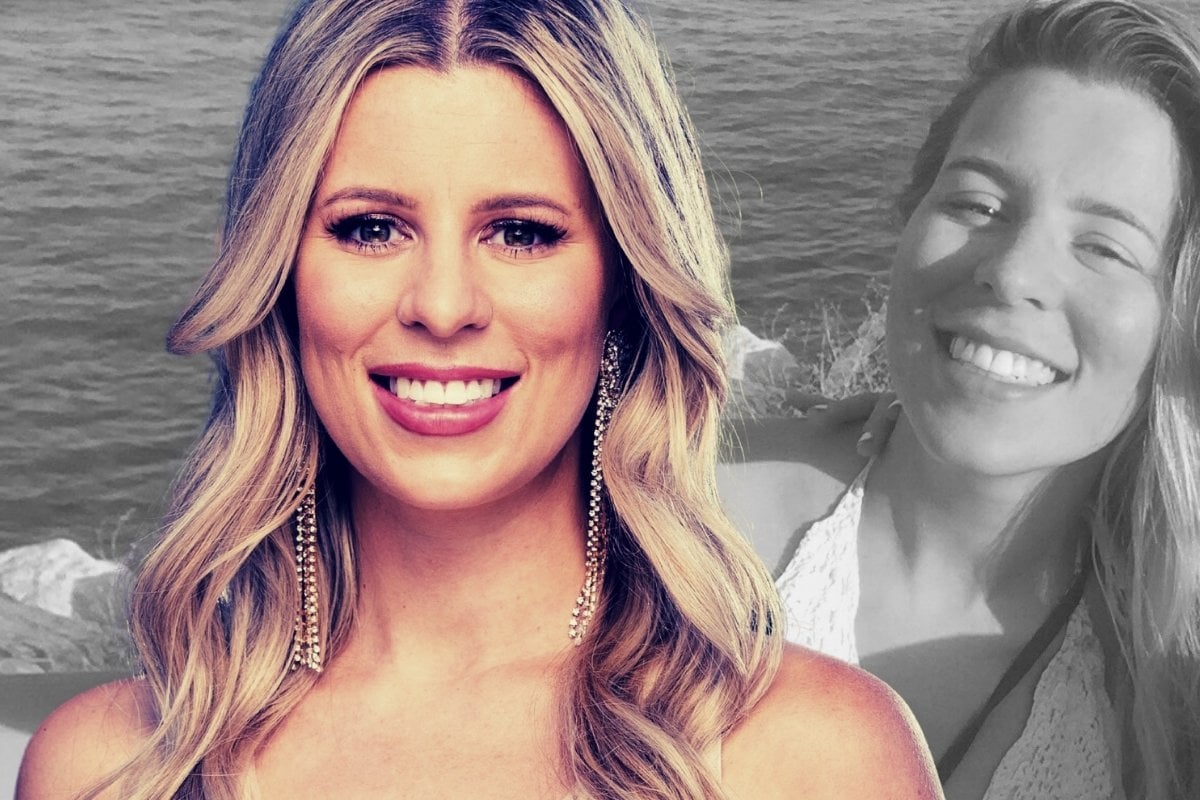 The following contains descriptions of sexual exploitation that may be distressing.

There was a period in 2018 when Ashleigh Freckleton felt split in two.

There was the lucid, rational Ashleigh who was alarmed by what was unfolding around her, who knew the yoga school she'd joined was something far more dangerous, manipulative, and abusive than it claimed. Then there was the Ashleigh who'd been coerced and brainwashed into justifying it all, into unpicking her suspicions, one by one.

Ashleigh, who many will recognise from the current season of The Bachelor Australia, joined the school while living in London. She was 25, alone in a new city, recovering from a relationship breakdown, and searching for a purpose.

A deeply spiritual person, raised in the Catholic faith, she was contemplating studying yoga in India when a well-meaning friend recommended a yoga school with branches across Europe. (The group will remain unnamed in this article.)

"This friend was so charismatic, and he was the first person I'd spoken to about spirituality who wasn't afraid to use the word God, who wasn't afraid to talk about all different types of faith, and synchronicity, and fate and destiny and life path, and all these sorts of things. I was like, 'This is my calling. This is the first person I've ever met, that understands me,'" Ashleigh told Mamamia.

"Eventually, he said, 'Look, rather than going to India, come to Romania and live for a month amongst all the yogis. It's one of the only true schools that teaches real yoga with a real guide.'"

After taking classes online for several months, Ashleigh flew to Romania in August 2018. 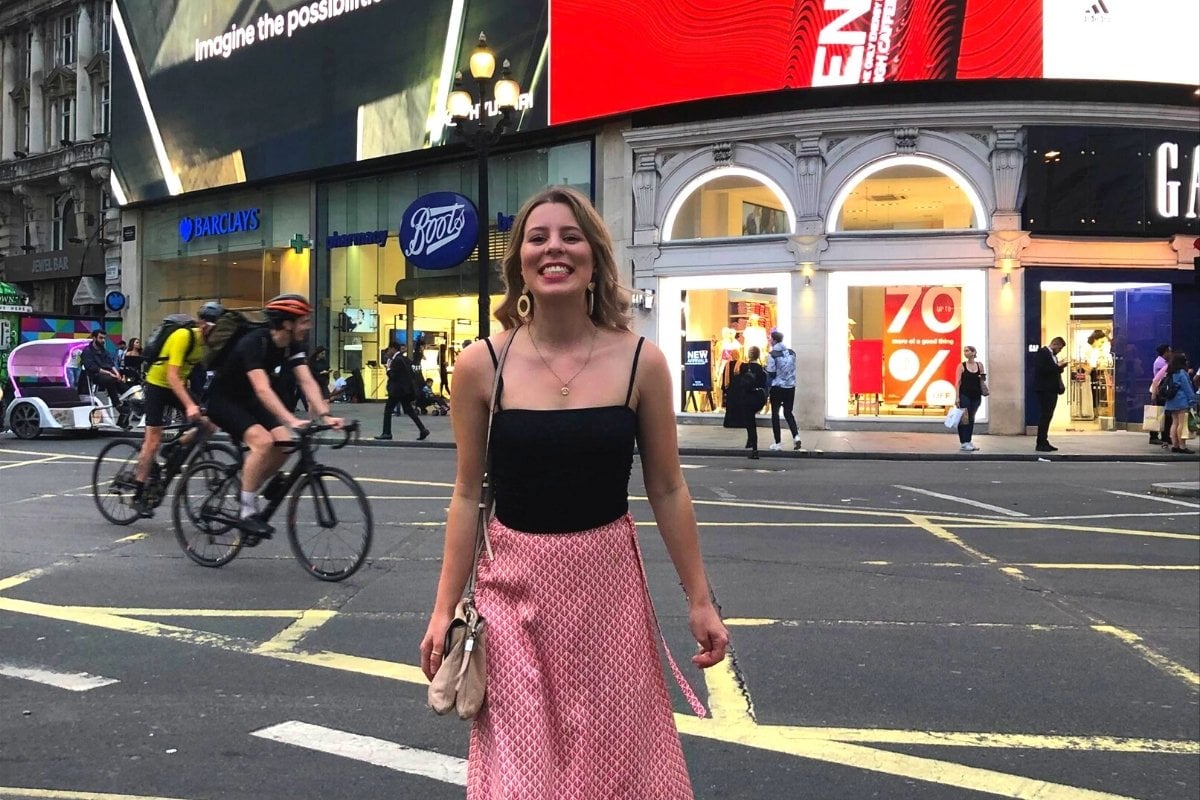 Ashleigh during her time in London. Image: Supplied.

Ashleigh said when she arrived at the camp, she was made to take vows on her own health and spiritual evolution that she wouldn't tell anyone what happens in the program. She said she was then told to strip naked, was photographed and interviewed about her devotion to Him — the school's guru.

Ashleigh said her body was "screaming" at her that the situation wasn't right, that she should leave. But she'd been admitted into the program for free, she didn't have a job or a flight out of there for another month, and she said she was being told that her discomfort with her nudity was rooted in superficiality and that she'd need to overcome that to progress.

"Even though my body's telling me this is wrong, I'm shaming myself thinking, 'It's your ego. You need to spiritually evolve. You've got to push through, keep going,'" she said.

While the yoga and meditation provided a much-needed salve to her anxiety, she said it soon became clear they were only part of the program. They were mixed in with teachings about tantra, Hinduism, and Buddhism. There was Freemasonry propaganda, conspiracy theories, and anti-vax messaging. She said she was made to watch hours of footage of the guru performing supposedly miraculous acts like moving a compass.

The characteristics of a cult.

Cults are broadly defined by the three characteristics: A charismatic leader, who increasingly becomes an object of worship; a process of coercive persuasion or thought reform (commonly referred to as 'brainwashing'); and economic, sexual, and other exploitation of group members.

"There's that old adage that nobody joins a cult," Ashleigh said. "You don't join a cult; you join a yoga school, you attend a self-development seminar, you go to a wellness retreat, you join a political movement wanting to better the world," she said. "The people that join, they have very positive and good intentions, and they're exploited."

It's also important to note that intelligence is not among the factors identified in research about an individual's susceptibility to joining a cult. Instead, the commonly cited traits include those such as emotional vulnerability, lack of strong family support systems, situational stress and low socioeconomic status.

Ashleigh said the next, and final, step in her indoctrination was an initiation ritual in Paris.

She claims when she arrived at the train station she was put in a car, given a hat to pull low on her head, and a pair of sunglasses with tape on the inside to obscure her vision. After a roughly 40-minute drive out of the city, she arrived at a house with frosted windows where she said her phone, her laptop, cards and passport — any connection with the outside world — was taken and locked in a safe.

The ritual involved meeting the guru for the first time and, ultimately, sleeping with him. Ashleigh refused. She said she was given promises that if she proceeded she would receive his divine energy, that her demons would be exorcised, that her beauty would be enhanced, her breasts would grow and she would have more sexual charisma.

"They promised the whole world at your feet, if you go through with the initiation. And they say that if a woman gets the opportunity and she says no, then she is stubborn, stupid, superficial. She's completely lacking any aspiration for spiritual evolution, and she's destined for a life of suffering and negative karma," Ashleigh told Mamamia.

Ashleigh said she didn't know where she was, nor have any means to escape. And the warring sides of herself were louder than ever.

"I felt like I was losing touch with reality. It felt like [the guru's] claws were grabbing my brain and like pulling it out from underneath me. I had to write letters to myself in my diary and tell myself to stay lucid, because I was so afraid," she said.

"I was terrified of what brainwashed Ashleigh would do. I didn't trust that I would have the strength to say no to [the guru]. When you're sitting there in front of him, naked, how do you say no to someone of that level of authority, even though every part of your being is screaming at you that it's wrong?"

Ashleigh said that when she was made to watch a testimonial video of another woman who'd just completed the initiation, a naked woman who Ashleigh said was "clearly not OK", that's when the rational side of herself won.

After eight days, she managed to negotiate her way out of the initiation and was expelled from the program, condemned.

"When I got to a hotel, I just collapsed on the floor in my room. I was in France, no one knew that I was there. I had to lie to my family. And I didn't know what to do," she said. "That brainwashed part of me was still there. It took months after coming home to Australia to really understand what had happened."

Ashleigh was ultimately diagnosed with PTSD as a result of her experience. But she began a path to recovery with the help of a psychologist and the support of her family.

"We were just sitting one Sunday around the table, and I don't even know how it came up. I just lost it. I started crying, and I just told them everything," she said. "Mum and Dad just held me and they were like, 'It's not your fault, you didn't do anything wrong.' But that was the hardest part, telling them.

"I didn't want to hurt them, because they gave me everything growing up. It's because I've got such strong family ties that I was able to get myself out in the first place. People that don't have that in their lives, they end up in there and they don't ever leave."

Another critical part of her recovery has been research and awareness-raising. She's now studying psychology with a view to conducting research to further our understanding of cults and cult dynamics. She also operates an Instagram page, CULTivate Awareness, in which she shares details of her story and prevailing research about the tactics employed by cult groups.

It's previously been anonymous, but now she's choosing to speak up, to own her experience, and turn it into something that may be beneficial to others like her. It's still a work in progress, but, she said, so is she.

"I'm still learning to trust my intuition and my instincts again. But I've learned that I'm a lot more resilient than I ever gave myself credit for," she said.

"I often thought that I was the underdog, and I've always thought that I'm not enough and that I need to be more and to do more. And this has helped me to learn that I am. I am enough."