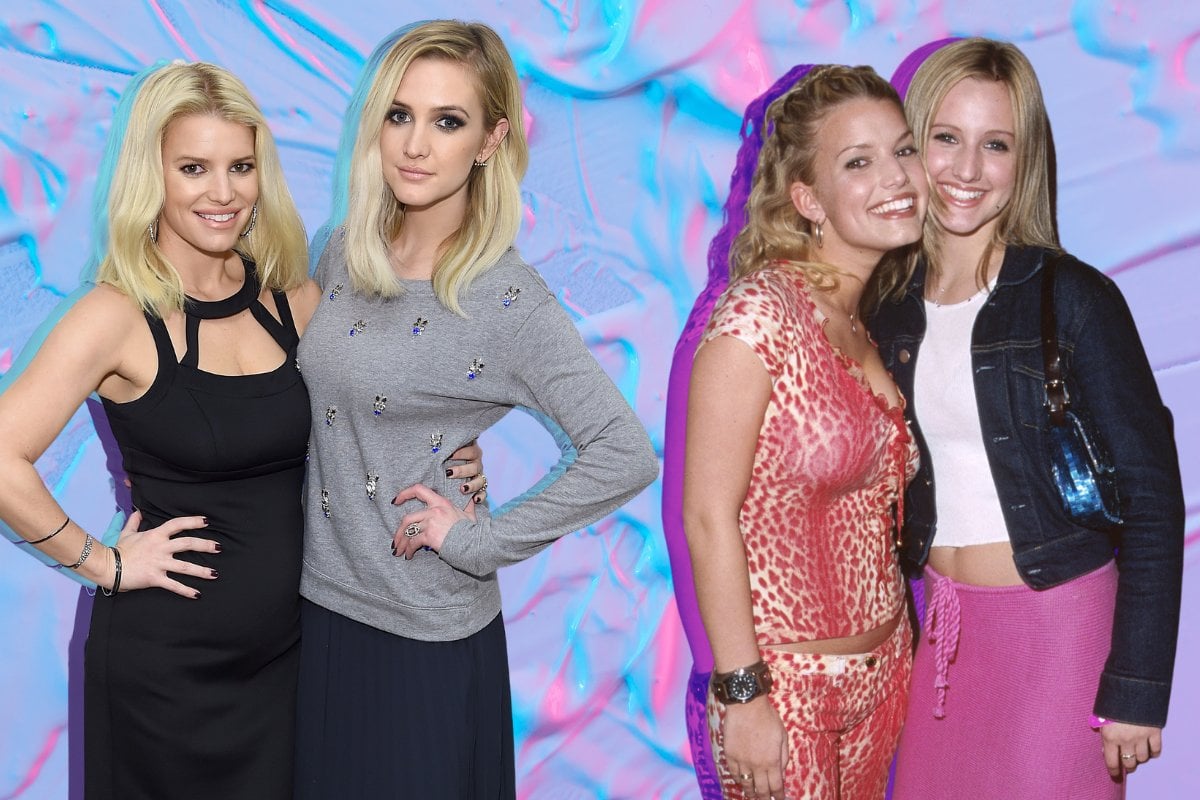 While the '90s were the decade of the boy/girl bands, the aughts belonged to solo superstars. Britney. Christina. Usher. Avril. Eminem. Alicia.

Among the lineup of hit-making artists were two unlikely stars from Waco, Texas: Jessica and Ashlee Simpson.

Born just four years apart into a devout Christian family, as teens they entered an industry that cast them in opposing roles: Jessica was all blonde waves and popular-girl aesthetic; Ashlee, the little sister stepping out of a shadow with smudged eyeliner and leather cuffs.

Now, two decades on, the sisters' days of high-flying world tours and two-tone dye jobs have given way to parenthood, memoir writing and a billion-dollar fashion empire.

Ashlee Simpson: rebel sister to (soon to be) mother of three.

An actor in her teens (credits include wholesome family drama 7th Heaven), Ashlee later established a music career on the back of her appearances in Newlyweds, the hugely popular reality show centred around her sister's marriage to Nick Lachay.

A spinoff series, The Ashlee Simpson Show, charted the recording of her first album, the pop-rock Autobiography, which sold more than 5 million copies worldwide.

Then came that infamous lip-synch mishap on Saturday Night Live in 2004, in which she mimed the lyrics to the wrong song. It was a 'gotcha' moment from which Ashlee's music career never quite recovered. 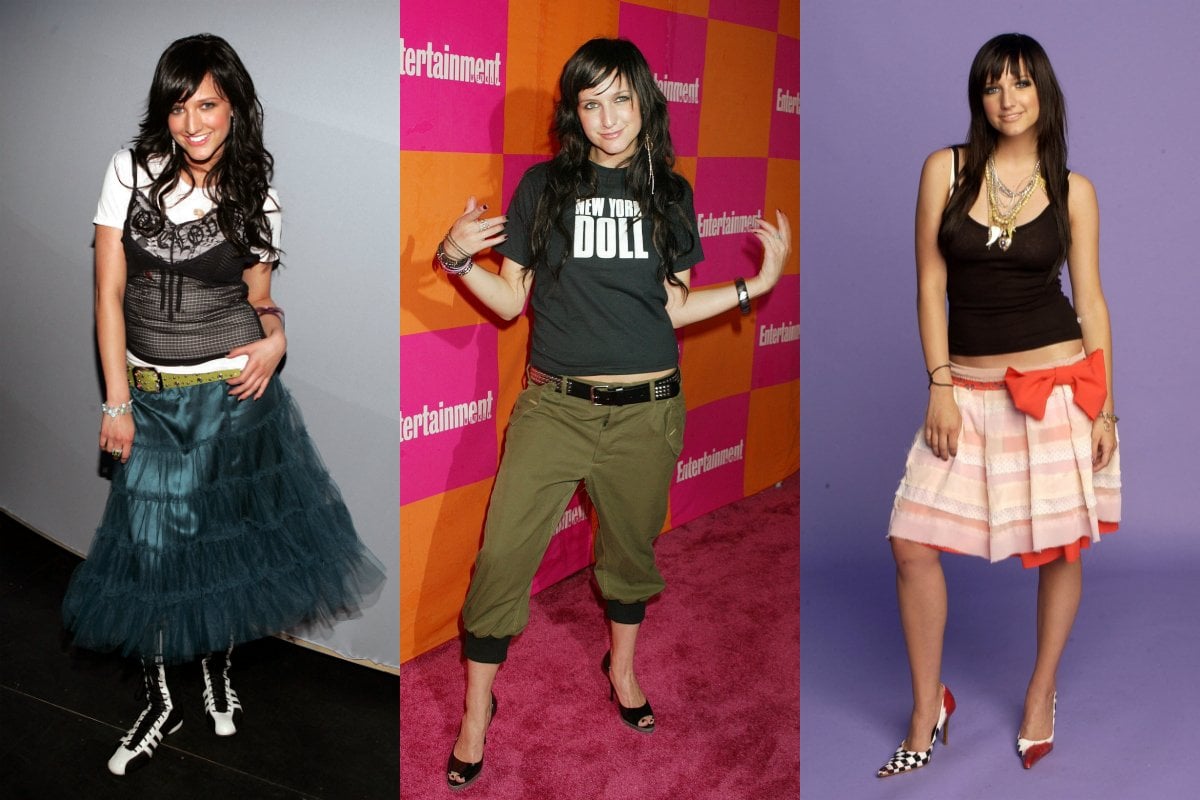 Her two subsequent albums —  2005's I Am Me and 2008's Bittersweet World — didn't soar nearly as high internationally, and Ashlee ended up stepping away from the spotlight for a decade.

During that time she married and divorced Fall Out Boy bassist Pete Wentz, with whom she had a son —Bronx Mowgli Wentz.

The 36-year-old is now heavily pregnant with her second child to husband, Evan Ross (the son of music icon Diana Ross) whom she married in 2014.

The couple also have a five-year-old daughter, Jagger Snow Ross, but recently told People they are eager to experience the newborn phase again with her sibling.

"Newborn babies smell so good. There's nothing like it," Ashlee said. "And we can't wait for the snuggles!"

Professionally speaking, Ashlee made a return to the spotlight in 2018 alongside her husband, with their reality series Ashlee + Evan and the release of their debut single, 'I Do'.

The show ran for one season.

Jessica Simpson was already a successful pop singer when MTV set up its cameras in her home for episode one of Newlyweds in 2003.

Then, while snacking on a brand of tinned tuna called Chicken of the Sea, she uttered the line that made her a household name: "Is this chicken what I have, or is this fish?...."

In the years since, Jessica has done plenty to disprove the 'ditzy blonde' stereotype subsequently ascribed to her.

She leveraged the popularity of the show to produce her highest-selling album (2003's In This Skin), launched a film career that included the box office hit The Dukes of Hazard, and in 2005 started fashion empire, The Jessica Simpson Collection.

While other celebrity brands have been long forgotten by fickle consumers, 15 years on, Jessica's company — which expanded from shoes to clothing, homewares and accessories — reportedly clocks an annual revenue of US$1 billion.

"People can say whatever the heck they want to say about me. I really don't care because they're probably walking on my name already," Jessica told Stellar earlier this year. "My logo is likely to be on the bottom of their shoes."

A post shared by Jessica Simpson Collection (@jessicasimpsonstyle) on Oct 15, 2020 at 7:38am PDT

The collection is where her professional focus is these days.

Although earlier this year, she also released her memoir, Open Book, which topped The New York Times' best-seller list.

The book delved into her childhood competing with young Christina Aguilera and Britney Spears for a spot on the Mickey Mouse Club, the sexual abuse she suffered at the hands of a family friend, her four-year marriage to Nick Lachey, alcohol and prescription drug dependence, and struggles with body image.

After being ordered to diet from the age of 17, Jessica developed a complicated relationship with her self-image.

"I mean, we all see our flaws. Some, the others don’t see. And mine were just out there for the world to rip apart, when they weren’t even flaws. When they were made into flaws that I didn’t know I had," she told People while promoting the memoir.

She's now sober and focused on her health.

She's credited her children with putting her on that path.

Jessica has three children with her husband, former NFL player Eric Johnson, whom she married six years ago.

Speaking on The Kelly Clarkson Show, she said, ''My kids, at the time, were five and four ... I was at a place where I was literally spiralling with the alcohol and I was missing out on moments with my children, and then they were seeing me and they were very confused.

Jessica's own role model now and through it all has been her little sister.

"This lady right here is someone we should all aspire to be...determined, hilarious, artistic, loving, soulful, wise, loyal and a champion of motherhood!!!