Elizabeth Chambers has responded to the allegations surrounding her former husband, Armie Hammer.

In recent weeks, multiple women have come forward with disturbing allegations against the actor, including claims of inappropriate and nonconsensual behaviour and emotional abuse.

Chambers, who announced her separation from Hammer in July 2020, shared that she was "shocked, heartbroken, and devastated" by the multiple allegations.

How to work out whether or not you're a feminist. Post continues below.

"For weeks, I’ve been trying to process everything that has transpired," she shared on Instagram.

"Heartbreak aside, I am listening, and will continue to listen and educate myself on these delicate matters. I didn’t realise how much I didn’t know," she continued.

"I support any victim of assault or abuse and urge anyone who has experienced this pain to seek the help she or he needs to heal."

The television personality added that she wouldn't be commenting further on the allegations.

"My sole focus and attention will continue to be on our children, on my work and on healing during this incredibly difficult time," she said.

"Thank you for all of the love and support, and thank you in advance for your continued kindness, respect, and consideration for our children and me as we find ways to move forward."

What are the allegations against Armie Hammer?

In the alleged messages, which reportedly date back to 2016, Hammer spoke about drinking blood and described various graphic sex acts, which included sexual references to cannibalism. 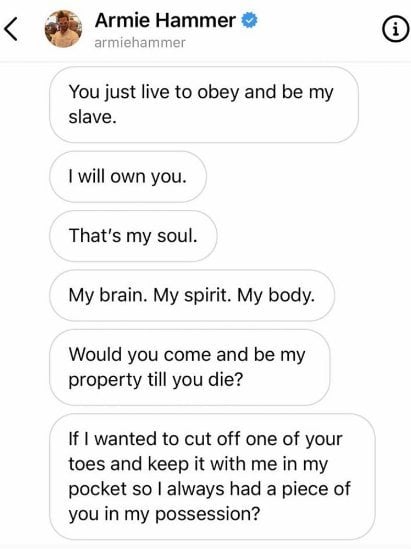 Since the screenshots were shared, multiple women have come forward with similar stories from their alleged sexual relationships with the Call Me By Your Name actor.

Courtney Vucekovich, who dated Hammer from June to August, described their short-lived relationship as emotionally abusive.

"He quickly grooms you in the relationship. He kind of captivates you and while being charming, he’s grooming you for these things that are darker and heavier and consuming. When I say consuming, I mean mentally, physically, emotionally, financially, just everything," she told Page Six.

In the interview, the 30-year-old app developer described Hammer's behaviour in their relationship as "obsessive", claiming the actor would text her 100 times per day when they weren't together.

"I wasn’t safe," she said. "I had this gut feeling the whole time that this was not right. He’s not well."

Another former girlfriend, Paige Lorenze, claimed that Hammer branded her by carving the letter "A" into her pelvis.

"He basically tied me up and he was doing knife play... Knife play made me the most uncomfortable out of everything that happened," she told The Kyle and Jackie O Show.

"He looks over me and says, 'Where am I going to put my initials on you?' He chose a spot and did it," she recounted.

She also alleged that Hammer bruised her during sex, and sent photos of her naked body to people without her consent.

The explicit photos, according to Lorenze, were taken without her knowledge and sent to other women he was speaking to.

Speaking to Kyle and Jackie O, Lorenze claimed that Hammer "wanted to find a doctor to remove the ribs I don't need".

She continued: "He has a smoker in his house in LA and he wanted to smoke it and eat it. He would always say, 'I wonder what it tastes like? I bet it tastes good.'"

What has Armie Hammer said?

In January, Hammer withdrew from the film Shotgun Wedding, which he was set to star in alongside Jennifer Lopez.

In a statement to Variety, the 34-year-old said: "I’m not responding to these bulls**t claims but in light of the vicious and spurious online attacks against me, I cannot in good conscience now leave my children for four months to shoot a film in the Dominican Republic. Lionsgate is supporting me in this and I’m grateful to them for that."

Last week, a lawyer representing Hammer denied the allegations in a statement.

"These assertions about Mr. Hammer are patently untrue. Any interactions with this person, or any partner of his, were completely consensual in that they were fully discussed, agreed upon, and mutually participatory," the statement read, according to The Sun.

"The stories being perpetuated in the media are a misguided attempt to present a one-sided narrative with the goal of tarnishing Mr. Hammer’s reputation, and communications from the individuals involved prove that."

Armie Hammer and Elizabeth Chambers met through a mutual friend in 2006. At the time, Chambers was dating someone else.

"Our friendship continued to grow and grow until one day when I was like, 'I can’t be friends with you anymore. You’ve got to break up with your boyfriend, and we’ve got to start dating,'" Hammer told Vulture.

The couple got married in May 2010 and welcomed two children together, six-year-old daughter Harper and three-year-old son Ford.

In an interview with Playboy in 2013, Hammer opened up about his sex life.

"I liked the grabbing of the neck and the hair and all that. But then you get married and your sexual appetites change... And I mean that for the better — it’s not like I’m suffering in any way. But you can’t really pull your wife’s hair. It gets to a point where you say, 'I respect you too much to do these things that I kind of want to do.'"

In July 2020, the couple announced their separation after 10 years of marriage.