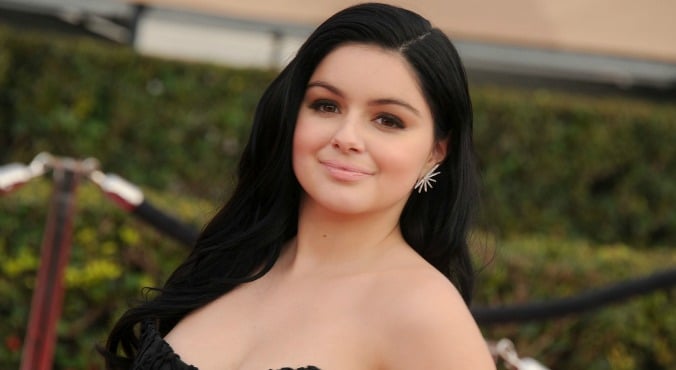 At the Screen Actors Guild Awards on Saturday, Ariel Winter wore a gorgeous strapless dress with a plunging back.

There was plenty to admire about Winter’s styling choices — her Romona Keveža gown, the earrings, the lipstick — but instead, the public’s attention was drawn to one tiny detail.

If you look closely at this photo, you can see a small scar emerging from the bodice of the actress’ dress:

As you might recall, the Modern Family star opted to have breast reduction surgery last June after years of physical pain and scrutiny of her appearance. And, as she explained on Twitter, she's not in any rush to conceal the marks left behind seven months on — even on the red carpet.

"Guys there is a reason I didn't make an effort to cover up my scars! They are part of me and I'm not ashamed of them at all," the 18-year-old tweeted earlier today in response to comments from her followers.

Excuse us while we applaud her for her honesty — although it's not exactly out of character. From the moment she made her surgery publicly known, Winter has been refreshingly upfront about why she made the decision to reduce her size 10F breasts to a size 12D.

Watch: All the red carpet action from the 2016 SAG Awards. (Post continues after video.)

“It started to hurt so bad that I couldn’t take the pain. My neck was hurting so bad and I actually had some problems with my spine,” the actress explained in an interview with Glamour last year. The actress had previously acknowledged that her breasts also made clothes shopping difficult.

As if her physical discomfort wasn't enough, Winter was also dealing with the gaze and criticism of thousands of viewers and social media followers, along with the global media.

“Every article that has to do with me on a red carpet always had to do with ‘Ariel Winter’s Crazy Cleavage!’ Or ‘Ariel Winter Shows Huge Boobs At An Event!’ That’s all people would recognise me by, not, “Oh, she does great work on Modern Family," she told Glamour.

"The internet bullies are awful. I could post a photo where I feel good, and 500 people will comment about how fat I am and that I am disgusting. It's hard when you're a teenage girl and you already have a lot of ridicule and then you pile on more, and it's kind of... it just gets too much." (Post continues after gallery.)

Rather than give the media free reign to speculate about her surgery, Winter decided to speak up to empower other young women in her situation. "It's important to talk about it because there are young girls suffering like I did, but there shouldn't be a stigma about it," she told People.

Though she has said it's the only cosmetic surgery she'll undergo, Winter was overjoyed with the final result and the effect it had on her confidence.

“I was really so thrilled about it and the idea of not being burdened with these any longer," she told Glamour.

If Ariel Winter is happy with her new breasts, and the scars left behind from her life-changing surgery, then that's the only thing that really matters.