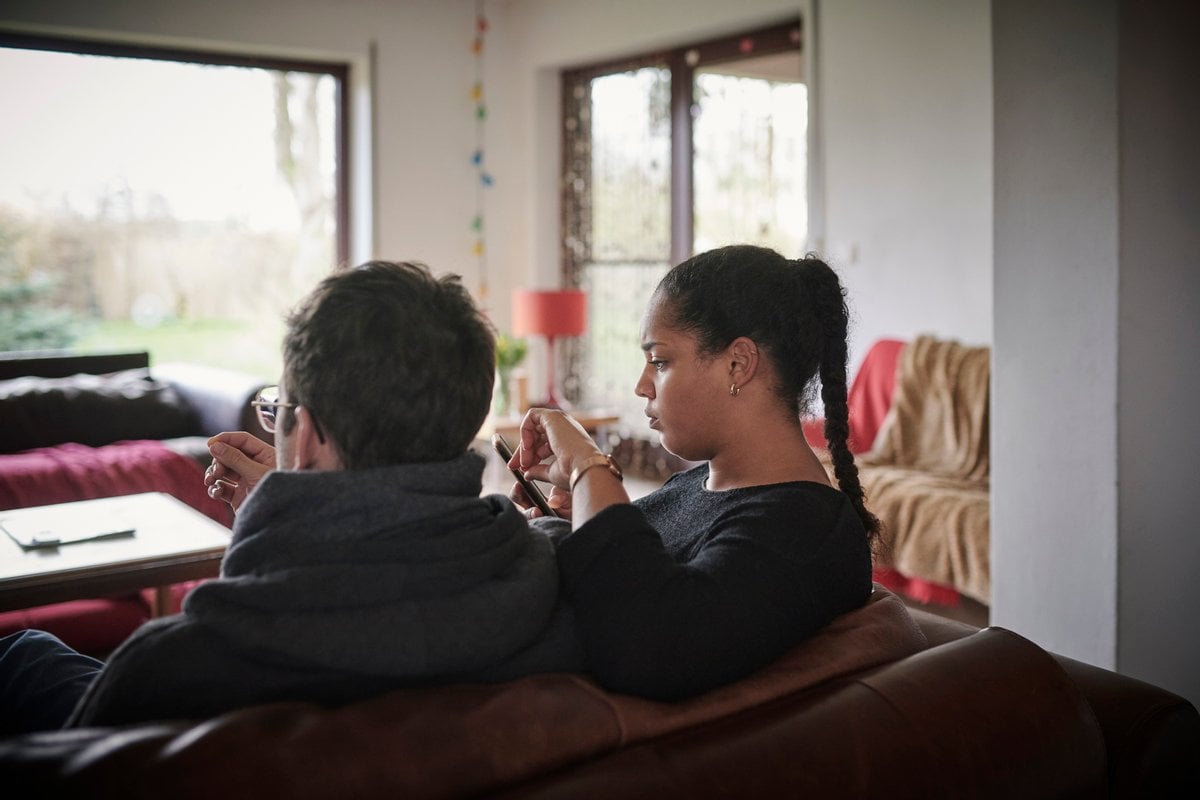 Does calling out the patriarchy increase the divide between men and women?

Last night I was chatting to my boyfriend over Facetime as we do almost every night - he is working a corporate job in Brisbane and I am working as a Doctor in NSW.

We’re separated by a border battle between states; with neither of us knowing where the finish line is or when we will be able to see each other again. But that’s not why I am so passionately hitting the keys on my laptop.

I was telling him what had happened in one of my group chats a few days prior. As it almost always does, the discussion digressed into the COVID numbers and when all this s**t might end.

There was commentary on how Anastacia Palazczuk had been reluctant to agree to a border re-opening when vaccination hits 80 per cent.

There was outcry within the chat, calls of:

"She needs the boot!"

But then the tone of the comments changed.

"Have you guys noticed how much makeup she’s wearing lately?"

"Our taxpayer money going towards a s**tty makeup artist no doubt."

This commentary got me thinking: why was it so easy for us to quickly pivot from generalised criticism of our Premier's ability to lead to the specifics of her appearance?

The inclination to do this can feel so natural it is almost ingrained. Sometimes we need to remind each other that when we do this, it sets the standard for men to do the same and perpetuates that awful trope that, “women are all bitches”.

Fast-forward to my Friday night conversation with my boyfriend.

I try to rationalise why these women that I love so much might behave in this way. And why, I too, am guilty of having similar thoughts about powerful women who I disagree with from time-to-time.

My girlfriends are intelligent and generous and kind and funny and thoughtful people. I start to dissect the concept of internalised misogyny.

Is it our patriarchal society that has always primarily valued women for how they look and not what they do? So that when a woman does something we don’t agree with, the most obvious and primal way to bring them down is to criticise her face, her hair, her body?

And then the s**t quite catastrophically hit the fan.

By me calling out the patriarchy almost immediately my partner felt like he had to be on the defensive.

Why is it men’s fault that women behave this way? Why did I have to use the word "patriarchy", why didn’t I use the phrase "societal norms" instead?

He argues that the focus on the concept of patriarchy puts too much emphasis on the unalterable standards we have inherited from our past rather than addressing the ways we can make considerable change for our future.

The argument went on for a long time, with neither of us being able to agree with the other and I ended up going to bed frustrated and upset.

But it left me with the question - have we gotten to the point that calling out the patriarchy has become an attack on men? How else do I describe the truth that every system, every law, every theory and philosophy in human history has been man-made for men and by men? And that this invisible force that surrounds us and permeates every part of our culture impacts all of our behaviour.

Sometimes it is obvious, and we can measure it.

Good examples are the gender pay gap, rates of sexual assault or violence against women, or the archaic laws about abortion such as the one recently passed in Texas.

But at other times it is such a part of the social group-think it is imperceptible.

Glennon Doyle summarises it when she writes, "I have been conditioned to dislike strong happy girls and women."

This helps explain why, in high school, a common parlance was, “I just hate Delta Goodrem, I just find her SO annoying,” and then in university it was, “Taylor Swift thinks she’s such a good girl I just CAN’T stand her!”

My partner considers himself a feminist.

He hires a lot of people at work and generally chooses women more often than men, arguing that their capabilities often exceed what comes across in interviews.

His boss and mentor, who he admires and respects, is a woman. He is also dating a strong, albeit stubborn, woman - hi, hello yes that is me!

Yet, when I use phrases like "patriarchy" and "internalised" misogyny”, he feels like I am conveying a sense of blame and getting in the way of progress.

He argues that it feels like I am drawing a line in the sand between women and men when we should be collectively trying to move forward together.

How do we have this conversation with the important men in our lives in a way where they don’t feel ostracised?

Has the word "patriarchy" become loaded and weaponized and "dirty"?

By naming it, are we just giving rise to a culture of men feeling like they must defend something they were never responsible for in the first place?

How do we show them that referencing the patriarchy is not about taking on responsibility for why women are still oppressed in 2021, but it’s about acknowledging the place of privilege that was bestowed upon them by past generations?

Charlotte Higgins summarises it beautifully in her 2018 piece in the Guardian: "Only 'patriarchy' seems to capture the peculiar elusiveness of gendered power – the idea that it does not reside in any one site or institution, but seems spread throughout the world…"

What other word can capture the immeasurable influence of our past and, at the same time, explain the continued existence of inequality?

I love men; I think they’re brilliant. We need them on our side.

How do we make sure they are partners with us in this movement when the mere language that surrounds it means that they immediately feel defensive?

Or that they are meant to apologise for something that they didn’t personally do?

Perhaps the fact that they feel so threatened is just a product of fragile masculinity… which is likely the result of our patriarchal society… and oh shit we’ve come full circle.

But you can’t win an argument with someone when they use the phrase: “When you say that I feel like this.”

Because you can’t tell someone how to feel. It’s the oldest trick in the ‘how to win an argument with your partner book’. Please tell me, which one of you ladies gave him a copy?!

What I really want to know is how to have this important conversation with men in a way that is constructive and progressive.

In the tireless struggle towards equality how do we ensure men are our biggest allies in this movement and not our enemies?

Words matter. It seems to me that the term "patriarchy" has become one of those words that causes such an overwhelming and immediate visceral response in the listener that it drowns out anything else.

Is this reaction from some men just another way of silencing the conversation? Or by the mere fact that the term is gendered, it has now become synonymous with ‘anti-men’ and we need a better more inclusive phrase?

Reply
Upvote
1 upvotes
Maybe talk to your boyfriend about how patriarchy is a system, like you said, built over time to advantage men. He isn't responsible for its existence but he does benefit from it, while it disadvantages women. Internalised misogyny is part of the way in which patriarchy exists to disadvantage women by us policing each other (women) on things that are irrelevant to our worth. He is also not responsible for the existence of this, so let him know that it is not your intent to hurt his feelings or hold him responsible. However, him letting his feelings get in the way of you being able to talk openly about how the patriarchy, misogyny (internalised or otherwise) effects you and your friends, prevents him from seeing what it's like from your side. Otherwise, he shuts you down from expressing you experience of the world. To shut down conversations that make us uncomfortable only maintains the status quo of inequality We are responsible for our own feelings and reactions. Remind him he is not to blame, but it doesn't help if he decides to take it personally.

Reply
Upvote
1 upvotes
I can see both views, but you can be a part of a system without it being your fault. Take for example white privilege. I don’t get offended when I hear the inequalities amongst indigenous peoples. I can own my privilege and work to be part of the solution.
News
General
Opinion
True Crime
Politics
Sport
Explainer
Entertainment
Celebrity
Reality TV
Movies
TV
Books
Rogue
Royal
Lifestyle
Beauty
Fashion
Weddings
Home
Wellness
Health
Fitness
Travel
Food
Parents
Before The Bump
Pregnancy
Baby
Kids
Teens
School
Parent Opinion
Work & Money
Money
Finance
Career
Lady Startup
Relationships
Sex
Dating
Separation
Friendship
Family
Real Life
Couples