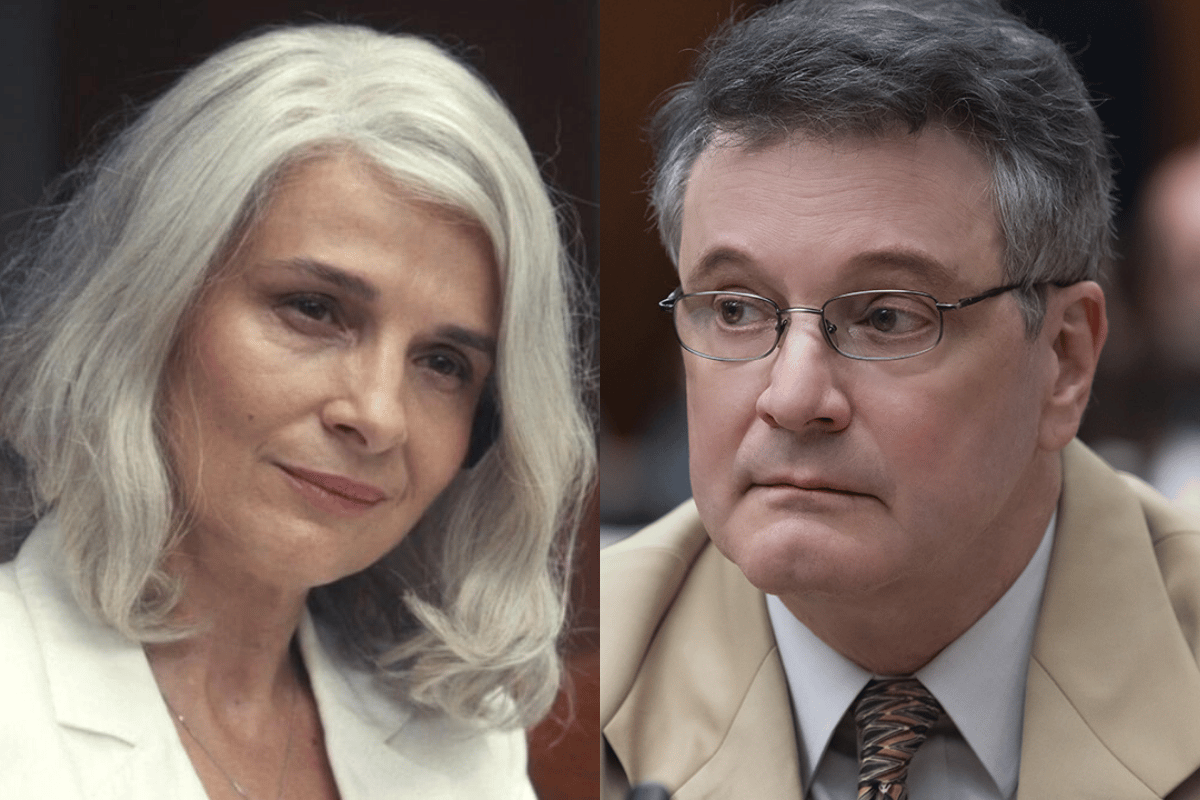 This post contains spoilers for the drama series The Staircase.

Recently, viewers have been intrigued by the story behind Binge's new mini-series The Staircase.

This case holds a special place in the heart of true crime fans because the original The Staircase docuseries on Netflix likely spurned the true crime genre, which is now such a pivotal part of pop culture. Of course, unpacking the problematic nature of that in itself is key.

A new takeaway that we previously didn't know much about was the relationship between Michael Peterson - the man accused of murdering his wife - and Sophie Brunet - the woman who worked as a film editor on the original docuseries.

Because while Brunet was compiling the trial footage taken by her French documentarian counterparts, she somehow became interested in Peterson romantically. And from then on began a complex and arguably bizarre relationship.

For a quick refresher, The Staircase follows the real crime case surrounding the death of North Carolina business executive Kathleen Peterson. Her body was found at the bottom of a flight of stairs in her home in December 2001. Her crime novelist husband Michael Peterson (played by Colin Firth in The Staircase drama series) was immediately deemed suspicious by first responders.

In October 2003, Peterson was found guilty of the murder of his wife. He was sentenced to life in prison without the possibility of parole.

During his trial and the preparation beforehand, Peterson was contacted by a French documentary crew headed by Jean-Xavier de Lestrade, who asked whether he and his legal team would be interested in the documentarians following the case.

Peterson said yes, and so de Lestrade and his team began filming The Staircase. In 2004, after his sentencing, an eight-episode docuseries on the case was released. Follow-up episodes were added in 2012 and then again in 2018.

This is where Sophie Brunet comes into the picture. In the early days of filming and around the premiere of the original documentary, Brunet was an editor on the project. And while editing clips of Peterson's trial, she began intrigued by him. So much so she decided to send him a letter while he was in prison. 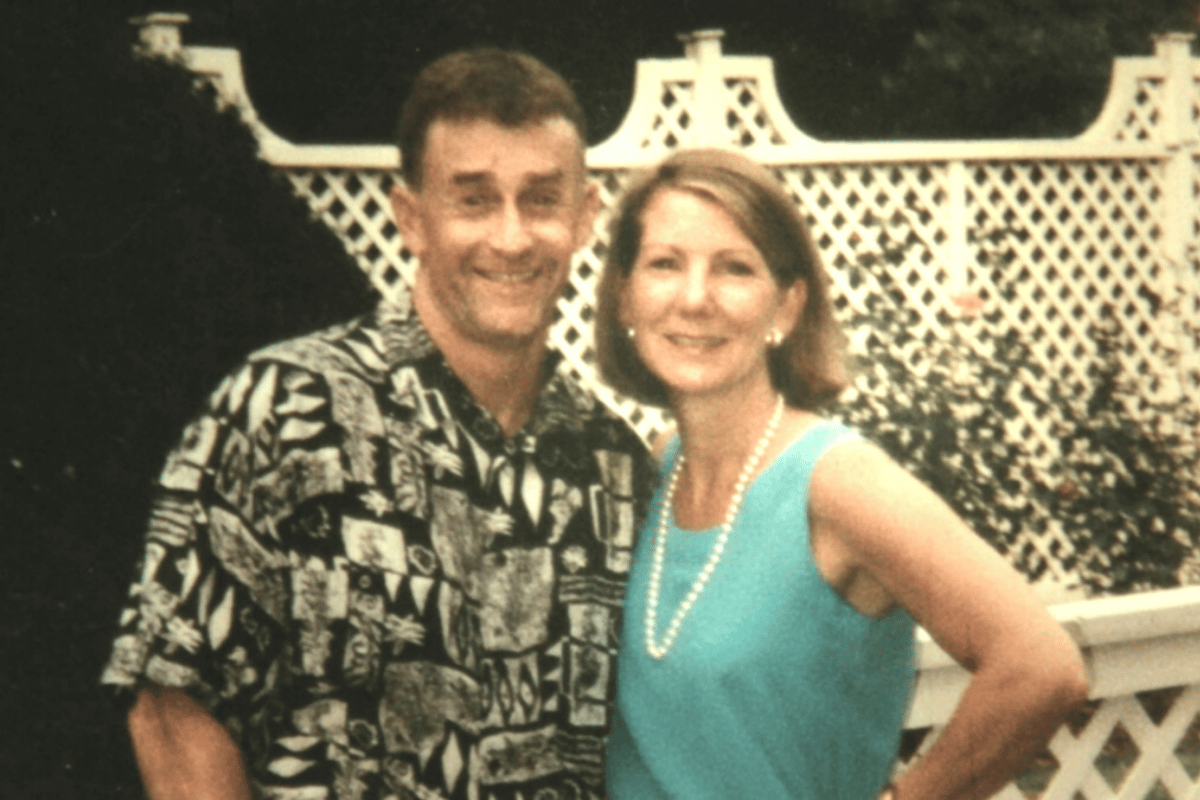 There was a 17-year age gap between the two. And it was the fact Peterson had been sentenced to life in prison without the possibility of parole that stuck with Brunet.

"I never wanted to write [to] him before that. The sentence was shocking to me," Brunet said to Vanity Fair this week.

"In France, there isn't anything like life without parole - not to mention the death penalty. To me, it was like putting someone alive in a coffin. I was affected by the cruelty and what I saw as a miscarriage of justice. So I decided to write Michael to offer to send him some books - which I did relentlessly while he was in jail."

Ultimately, it remains contentious as to whether Peterson's stint in jail was in fact a "miscarriage of justice", given the legal drama that would later ensue.

From one prison letter began a long-distance correspondence that would eventually lead to a relationship between the pair from approximately 2004 to 2017. For much of Peterson's jail time, Brunet remained in Paris and he in North Carolina where he was serving his sentence.

"I want to stress that I did not fall in love with Michael through the footage [I saw in] Paris, but through corresponding," Brunet said.

It was indeed love. Peterson himself wrote in his 2019 book Behind the Staircase that Brunet to him was "my only real friend".

He elaborated, saying Brunet was "the only one I confided in and revealed my fears to. I felt like a life preserver had been cast into the dark tumultuous sea swirling about me. I clutched it. Suddenly, I had a life within life in prison. Attractive, intelligent, funny, fluent in English with the most charming accent, she put me at ease immediately."

Listen to one of the latest episodes of Mamamia's entertainment podcast, The Spill. Post continues after audio.

After a year of sending letters back and forth, Brunet went to visit Peterson in person at his North Carolina prison - meeting for the first time. And from then on, her visits became more frequent, along with calls and additional letters.

Believing that Peterson had not killed his wife Kathleen, Brunet was (and remains to be) of the firm opinion that Kathleen died after an earlier owl attack created lacerations in her scalp. This is known as "the owl theory".

And so while Peterson remained incarcerated, Brunet continued to help in any way she could to secure him an appeal.

"At first I just wanted to support and then to love Michael," she said to Vanity Fair. "After his appeals failed in 2008, I also became involved in his defence because I thought - and still do - that this theory is the only theory of Kathleen's death that fits with all the evidence."

After being sentenced to prison to life, Peterson spent eight years behind bars before a twist in the case arose. 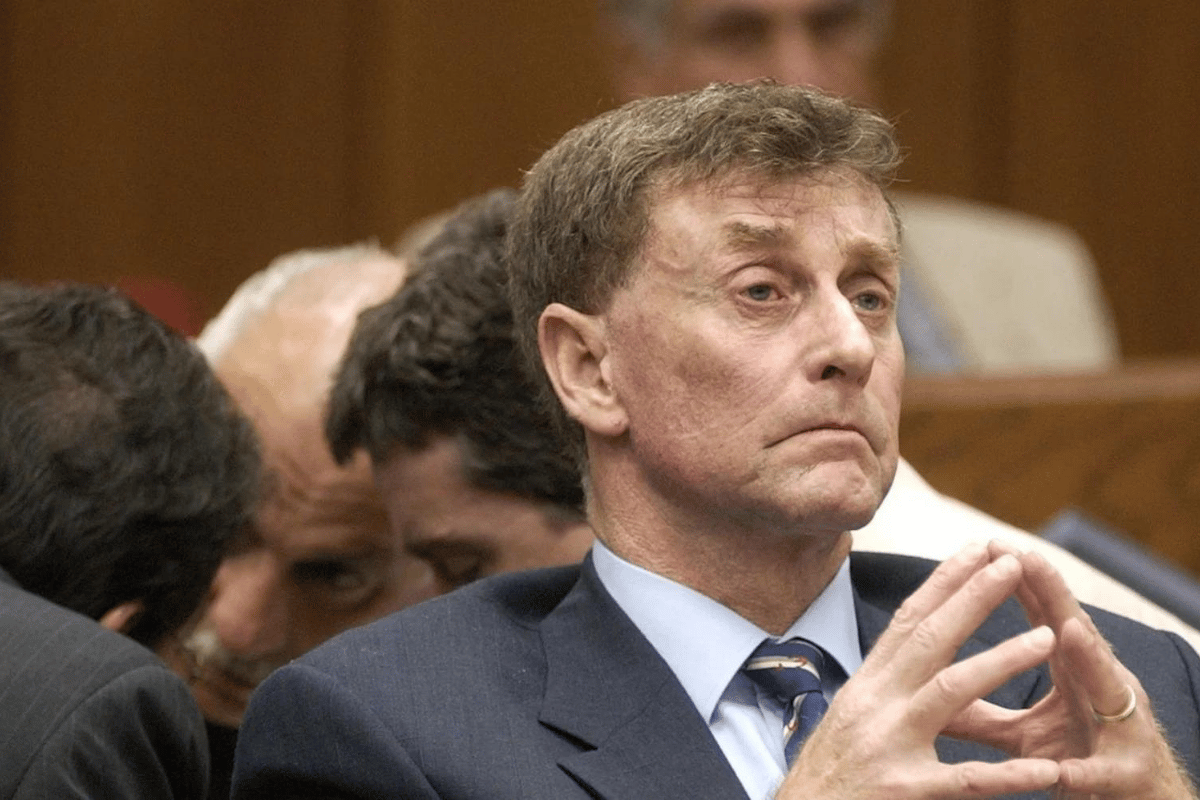 Michael Peterson on trial for the murder of his wife. Image: Netflix.

The blood splatter expert who the prosecution had used was found to have no training in forensics, and had exaggerated his credentials on the stand. So in 2011, Michael was given a new trial.

Later that year, he was released from the Durham County Jail on US$300,000 bail and placed under house arrest.

In 2017, he submitted an Alford plea to voluntary manslaughter. This essentially means the person accused of murder can admit that there's enough evidence to convict them, but not admit guilt for committing the crime. Peterson said his reasoning for doing this was to end the trials, rather than "putting his faith in the system again". He has maintained his innocence throughout.

From the moment Peterson was released on house arrest, Sophie and Peterson were able to build upon their relationship.

She would come and visit him regularly. And it was at this point the pair built a "joint fantasy of a life together in Paris".

But as Peterson grew closer and closer to freedom and being able to legally leave the country, he realised what it would mean for his children. To essentially abandon his family again, was something Peterson said he couldn't commit to.

"The dream grew ugly tentacles," he wrote in his book. "I was 73, didn't speak French, couldn't afford Paris, and had no friends there. I could not love Sophie like I had loved [his first wife] Patty and [his second wife] Kathleen, not enough to give up my country, my children, and my grandchildren."

It was a similar realisation for Brunet as well.

Reflecting with Vanity Fair, Brunet said that the fantasy had been tarnished by reality.

"Michael was not the man he had pretended he wanted to be. Or he changed too much during the long justice process. Today I feel incredibly lucky that I have a new, very happy life in Paris. Maybe getting out of my life was eventually the best gift Michael could give me," she said. 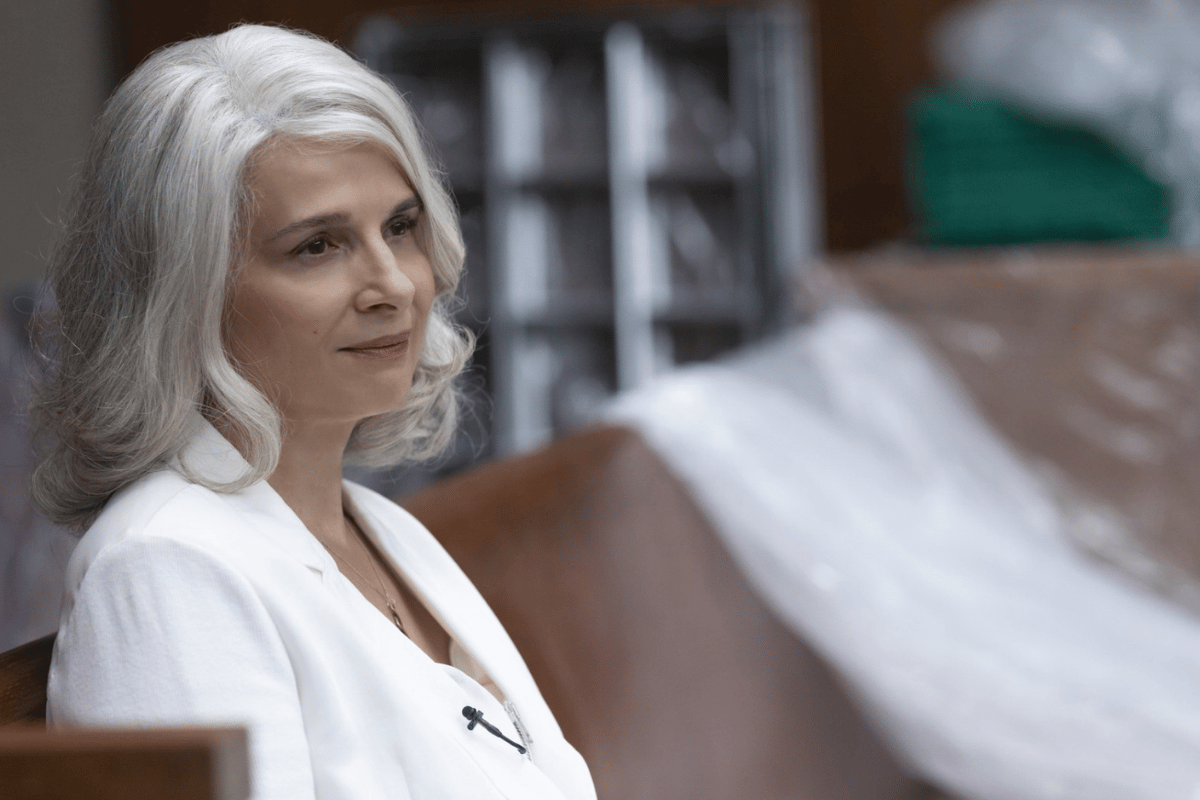 "I had great times. I took care of someone. I learned many things about myself and about others. I made friends, I became familiar with many wonderful aspects of the US. But I did not reconcile with the American justice system or the department of corrections."

In 2020, Brunet became aware that a drama series was in production based on the original documentary and the story behind it.

She never wanted to be a character. Nor have her relationship be made so public.

"I was upset when I heard that I was going to be a character in the Antonio Campos series. I felt betrayed and I was angry with myself that I had trusted Antonio [the man behind the drama series]," Brunet said.

She was then made aware that Oscar-winner Juliette Binoche would be 'playing' her as Sophie Brunet and that Binoche was eager to meet with her.

"I did not feel that there was anything I could do to avoid being a character in Antonio's [project]. I decided to make the best of it and meet with Juliette. I took this new friendship as a late gift, an unexpected happy ending to my painful story.

"I know that I am in good hands with Juliette." 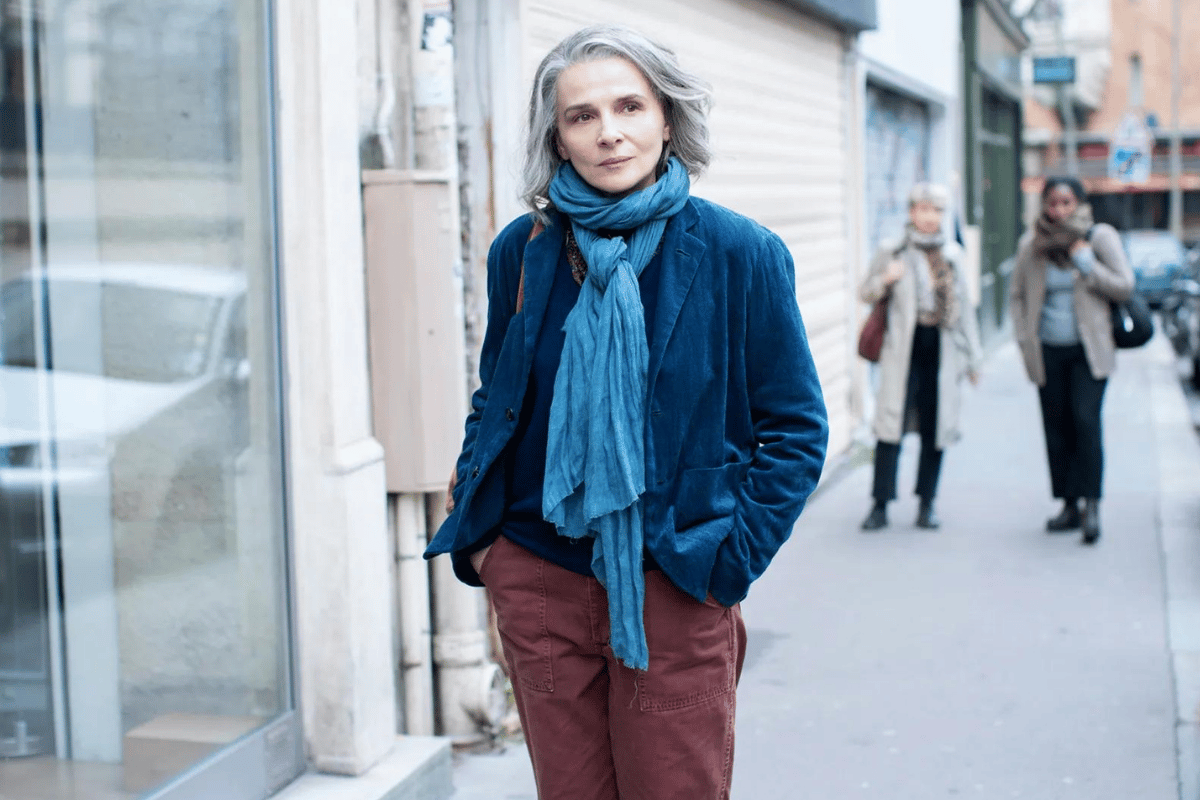