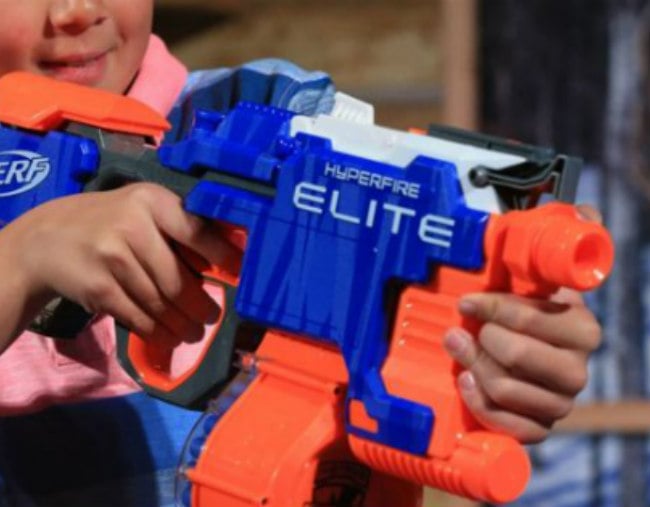 UK doctors have raised concerns about the risk of eye injuries and blurred vision from the foam bullets used in the popular Nerf gun toys.

They suggest children and adults playing with the toys wear protective goggles and that the recommended minimum age – currently eight years – be reconsidered.

Nerf toys, which are manufactured by Hasbro, include a range of guns, blasters, and bows and arrows.

Writing in the British Medical Journal, the emergency doctors from London’s Moorfields Eye Hospital told how three patients suffered injury from the guns in separate incidents. All suffered internal bleeding.

The doctors also treated an 11-year-old child who complained of pain and blurred vision after being shot in the eye from two metres. They say the boy developed a swollen cornea (the outer layer of the eye) and retina (the inner layer of the eye) from the force and speed of the bullet fired by the gun.

LISTEN: Catch up on all the latest parenting news with This Glorious mess (post continues after audio…)

Later check-ups showed these three patients eye sight had returned to normal and the bleeding had stopped, but doctors are concerned about the injuries could lead to long-term sight loss.

“This case series emphasises the seriousness of ocular injury from Nerf gun projectiles and calls into consideration the need for protective eyewear with their use,” the doctors wrote.

Cheaper, non-branded foam bullets that fit Nerf guns were also highlighted as a concern, with the doctors saying reviews showed the tips were harder than the Nerf branded ones.

“Product safety is of utmost concern at Hasbro,” a Hasbro company spokesperson said, adding that Nerf foam darts and rounds are not dangerous when used properly.

“Nerf products are designed based on years of consumer insights and research and undergo rigorous reviews and testing to assure that they are safe and fun to play with and meet or exceed global standards and regulations.”