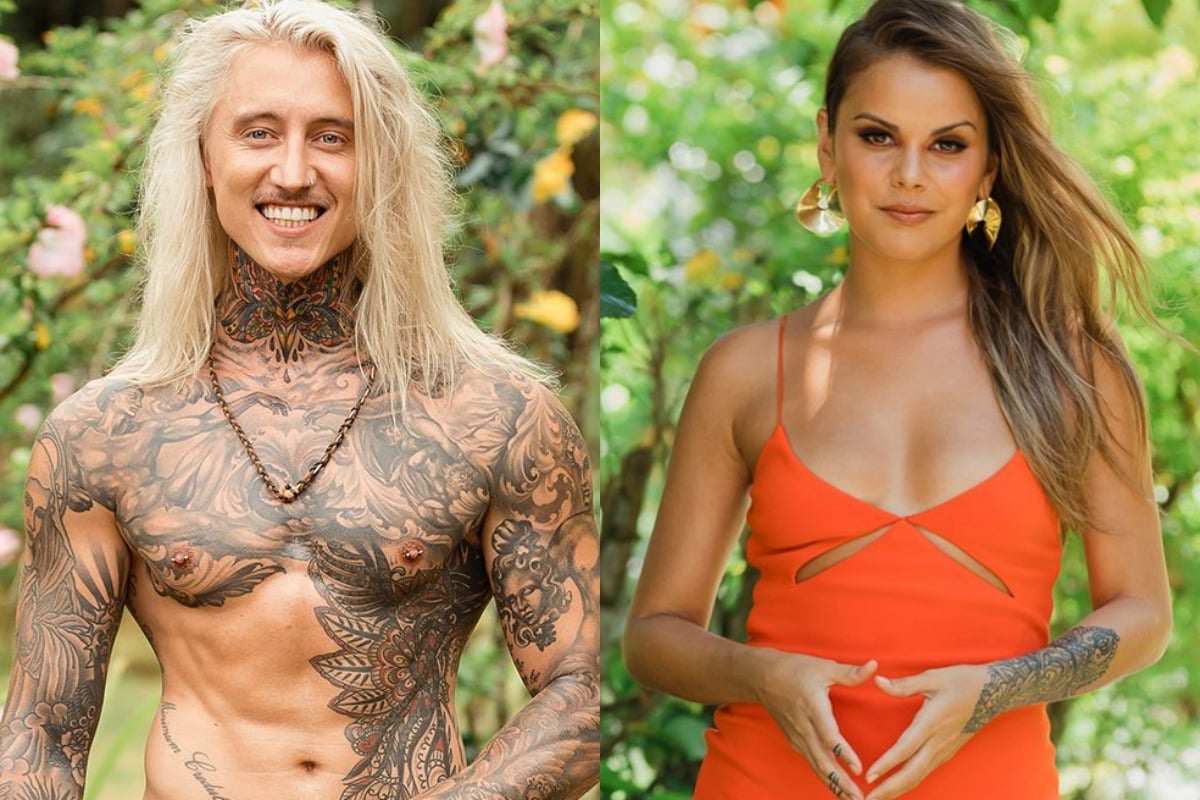 1. "I'll put a bet down." Conor and Mary believe Ciarran and Renee could be back together.

During last night's Bachelor in Paradise finale actual angels Conor and Mary "committed" to each other and said the 'L' word.

They are the wholesome content we all desperately needed to see this year.

They're now living together in Hobart, far away from the drama and gossip that surrounded them in Paradise.

While talking to Conor and Mary on Tuesday morning after the finale, we asked them about a little theory we have that Ciarran and Renee may have gotten back together post Paradise.

"They've been through so much. Obviously they would care for each other because they've been in a relationship for years," Mary told Mamamia.

"I wouldn't rule it out. I wouldn't say it's impossible," she added.

"I reckon it will happen. I'll put a bet down," Conor interjected. "You can't rule anything out at this stage."

During the finale, we learnt that Ciarran and Kiki left Paradise together - before the commitment ceremonies - and were determined to make it work in the outside world.

However, they only stayed together for two weeks before Ciarran allegedly "ghosted" Kiki.

Renee and Matt committed to each other during the finale, but after the episode aired, we learnt they have since broken up.

Meaning Ciarran and Renee were possibly both single at the same time.

Listen to The Spill, Mamamia's daily entertainment podcast. In this episode, Kee Reece and Laura Brodnik recap the love stories to come out of Bachelor in Paradise 2020. Post continues below.

On Wednesday night, we'll finally get to meet the women vying for Locky Gilbert's heart on The Bachelor.

But it turns out there were a number of other women who apparently quit the show before filming even began.

According to Woman's Day, some contestants became "disinterested" after finding out about Locky's line of work.

"There was a revolving door of women; it was quite a headache for casting," a production insider supposedly told the publication on Monday.

You see, Locky spends six months during the year living in Bali, where he owns the Four Elements Adventure tourism company. And some contestants weren't so keen on that.

"A lot of women were disinterested – it was just hard to get them to sign up and compete for a guy who spends half his life in another country."

The wait is over! Say hello to the beautiful women ready to join Locky on his quest for love 💕⁣ #TheBachelorAU starts, 7.30 Wednesday on 10.

His living arrangements also caused some problems later on down the line during filming, according to the unnamed source.

"The first weeks of filming were quite awkward because of all that... the girls had to really be encouraged by producers to take the process seriously and put it all on the line for him," they said.

Despite this, Locky still managed to find love in the end.

'"I can say with a big old smile on my face that I have definitely found love and I'm over the bloody moon right now," he previously told New Idea.

3. "It’s a bit difficult to watch." Ciarran Stott opens up about "learning and maturing" after Paradise.

And now the 26-year-old has opened up about what he's learnt from his time on the show.

"Looking back on it, it’s a bit difficult to watch, I didn’t watch all of it," he told Fox FM's Fifi, Fev & Byron this morning.

"The actions that I did, I have learned from it, and people do need to remember that this show doesn’t define who I am as a person. I did make mistakes on it, but I’m 26 and I’m still learning and maturing."

He also explained that Matt Wyatt initially pulled him aside at the Bula Banquet to let him know he was interested in Renee after their date. Ciarran said he was fine with it but after a few glasses of wine, things started to go downhill.

"I’m not a guy that thinks I own women, but that’s definitely how it came across on TV. I’m not like that whatsoever," he said.

Ciarran also shed some light on what happened when he left Paradise with Kiki, saying that he moved to Sydney to be with her.

"Moved in pretty quickly, it all went straight into the deep end really," he told the radio hosts.

"She didn’t do anything wrong, it just didn’t work, and I moved to Melbourne," he added

"It’s unfortunate our relationship didn’t work out the way we wanted, and we are no longer together," she wrote on Instagram.

"No regrets (no, really). The experience was definitely worth it as I have a new understanding of myself and the real love story here is how proud I am of who I have become!"

4. "Kitty's so disappointed." Jackie O on leaving her daughter to film The Masked Singer.

The Masked Singer is due to start tonight on Channel 10, and yes, we cannot wait to guess which celebrity is pretending to be a dancing lobster on our screens.

But whilst we're ready for a good ol' laugh, judge Jackie 'O' Henderson has admitted the Melbourne-based show hasn't been all fun and games.

The radio host told TV Week that leaving her nine-year-old daughter, Kitty, in Sydney while she films in Melbourne has been "the hardest part of doing the show".

"I'd always planned on bringing Kitty with me, but it's not possible because [the Victorian Government] are really strict with permits and I wouldn't want her here anyway now," she explained.

We’re back!! 🎭 See you at 7:30pm tonight for @themaskedsingerau Let the guessing games begin! #MaskedSingerAU

"I have a lot of fun on set, but I've not been away from her for longer than five days. I'm only a few days in, so I'm OK now, but if you interview me in two weeks' time, I'll be crying. It's really difficult, but we're on FaceTime every day, so that helps."

The 45-year-old added: "Kitty's so disappointed. She's obsessed with the show."

Jackie O shares Kitty with her ex-husband Lee Henderson, who announced their divorce in October 2018.

5. A farmer leaves the show, plus all the other spoilers for Farmer Wants A Wife in one place.

Farmer Wants A Wife has returned to our screens after four years, and as far as TV dating show success rates go, 9 marriages and 20 Aussie babies born is, well, suspiciously good.

Could this mean we're in for a drama-free, wholesome show where contestants are really out to find love?

It looks like this season may bump up the drama just a tad which, on the bright side, means we have very important spoilers to talk about.

From a shock, Blake-Garvey style ending, to a farmer whose close relationship with his ex is making all his potential new wives jealous, we've rounded up all the rumours about what you can expect from this season of Farmer Wants A Wife. 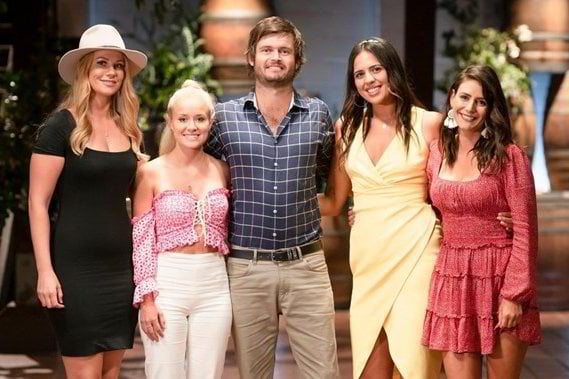 A farmer leaves the show

One of the farmers is set to leave the show this week after finding out that a family member had sadly passed away.

"It was really unexpected," the farmer, who was not named, told TV WEEK.

"It was really hard, because you're dealing with a lot of emotions from the show and are stressed out – and then, boom."

The farmer found out the news after receiving a phone call from his mother and said he was initially unsure if he could continue with the show.

"Part of me was like, 'I just can't, because I just don't think I can be myself,'" he told the publication. "I didn't think I could give the girls 100 per cent."

To make matters worse, one of the girls then apparently told the farmer that she wanted to leave because she wasn't developing any feelings.

"She was my ideal girl, and I felt comfortable I was going to pick her," he said.

"Far out! That was the worst day of my life. Having to deal with that, and the cameras are rolling, and you're thinking about your family."

"I just couldn't deal with any more bad news. I was just like, 'I want to go home. I want to be with my family right now.'"

Reply
Upvote
Probably a good thing that a bunch of women decided not to go on the Bachelor of he lives OS half the time. Isn't that always the issue in the end on these shows? One of them lives in Sydney, and the other lives in Perth, and neither really wants to give up their lives and move.
News
General
Opinion
True Crime
Politics
Sport
Explainer
Entertainment
Celebrity
Reality TV
Movies
TV
Books
Rogue
Royal
Lifestyle
Beauty
Fashion
Weddings
Home
Wellness
Health
Fitness
Travel
Food
Parents
Before The Bump
Pregnancy
Baby
Kids
Teens
School
Parent Opinion
Work & Money
Money
Finance
Career
Lady Startup
Relationships
Sex
Dating
Separation
Friendship
Family
Real Life
Couples