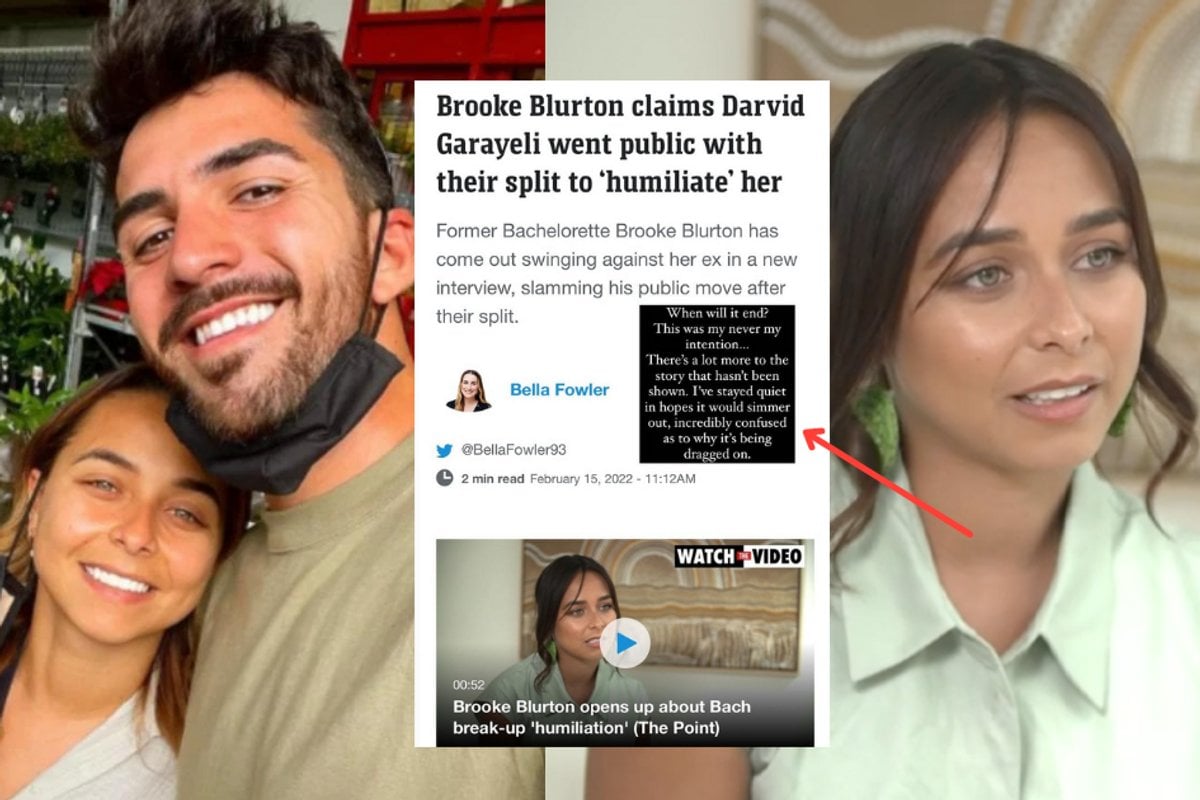 In January 2022, The Bachelorette winner Darvid Garayeli surprised precisely all of us when he announced he had split from Brooke Blurton.

It was just four weeks after possibly the whole most wholesome season we've seen from the franchise in a long time.

A month on from the breakup, Brooke Blurton has opened up about her experience of being on The Bachelorette on NITV's The Point.

On January 2, Darvid announced his separation from Brooke on Instagram.

"Starting the new year off with an end to a chapter and hopefully the beginning of another," he wrote.

"Unfortunately Brooke and I have parted ways. Whilst we both genuinely thought we were each other's person, things change and that's okay. Please respect our privacy and that at the end of the day we are both just people with real feelings.

"Thank you so much for being considerate, a lot of lessons learned." 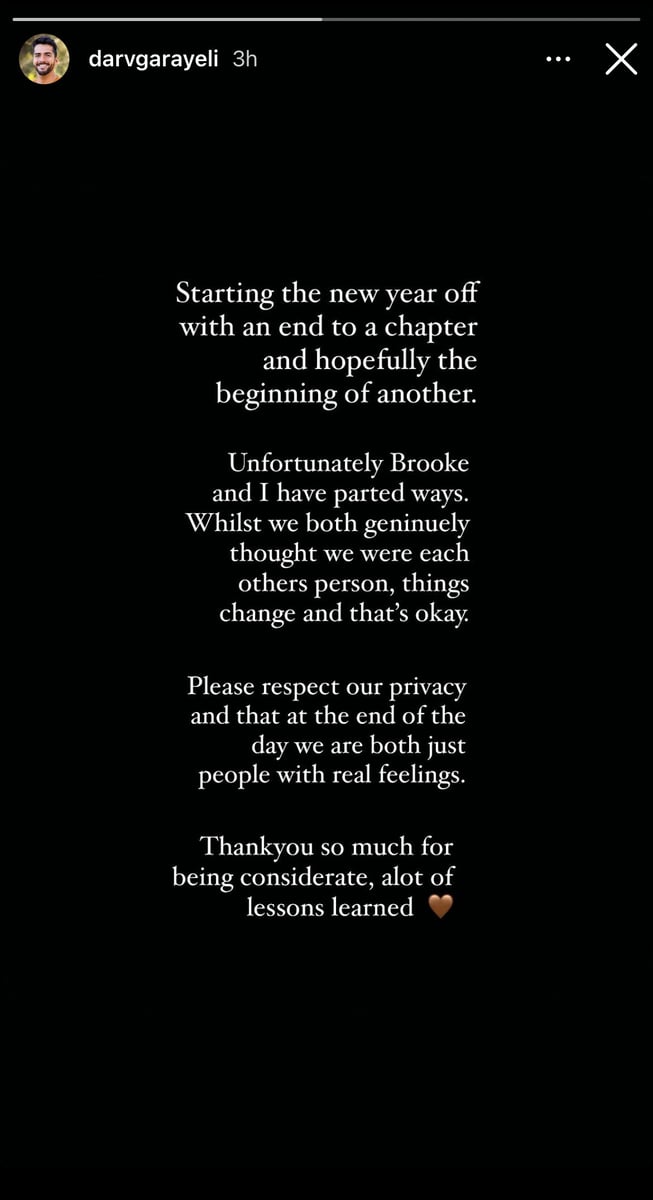 A few hours later, Brooke also shared her thoughts on Instagram, admitting Darvid's announcement was a "surprise" to her.

"Hey beautiful people, before my phone blows up. I just want to say right now I'm finding this really quite overwhelming and just as surprising to me as you guys," she shared.

"I just woke up to the news. It was definitely agreed to part ways. I just wanted to do it privately, amicably and respectfully. This is not how and what I expected to be doing right now so as you can imagine, this is all a lot," she continued.

"You will all have your judgements and have your say but there is a lot going on in my world and D's of course. So I again just ask you to be kind, we are human.

"I really do hope you respect some part of somewhat 'privacy' we do have right now because like I said, this was a surprise to wake up to just as much as it was for you guys." 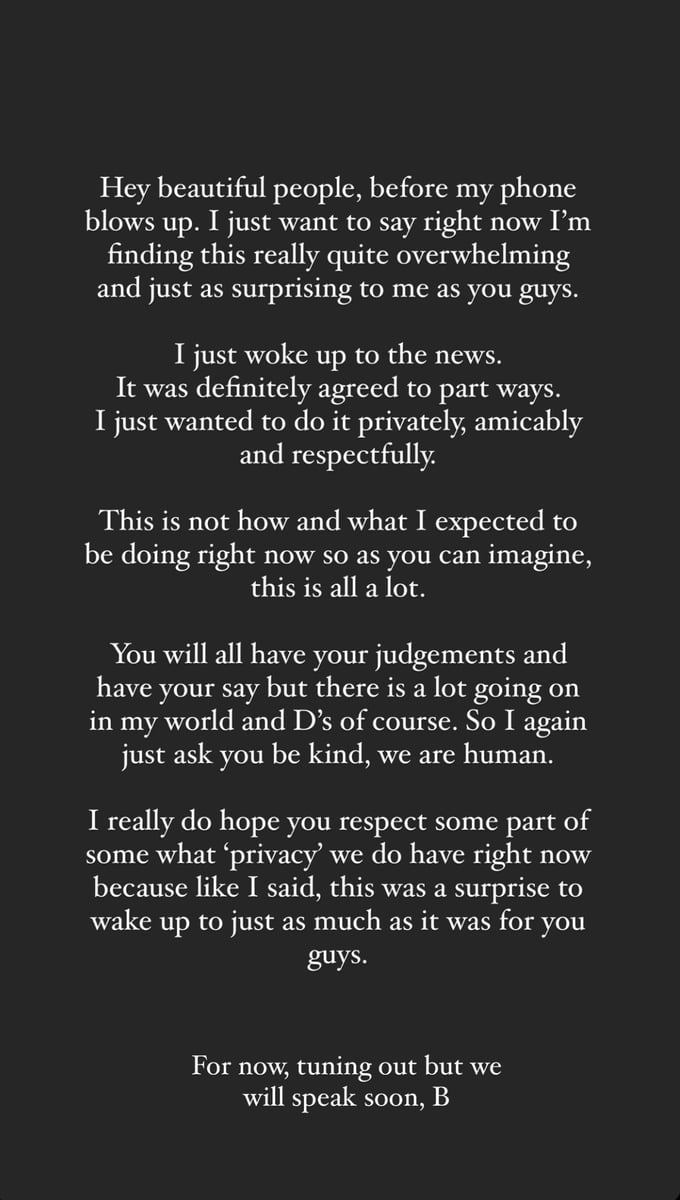 Why did Brooke and Darvid break up?

In an Instagram Story, Brooke shed some light on the split, sharing it was her decision to end things.

"I’ll be the first to say it was my choice to end the relationship, and I had been thinking about it for a bit towards the end," she wrote.

"My reasons for that are completely valid to me. I had been unhappy for a bit and it wasn’t just solely because of the relationship. I have a lot of respect for Darvid and what he gave up for me to be IN the relationship but it seems that we both lost ourselves along the way."

The 27-year-old went on to explain that the pair were under a lot of "pressure", before touching on the difficult time she went through after her sister's death last year.

"We had a very real love in a very unreal situation but we equally had A LOT of pressure on us too. Which I felt I carried every day," she said.

"At the start of the show, I was the best version of myself. When the show ended and my sister died, I became my worst and saddest," she continued.

"I definitely put my heart and soul into the show and to represent myself, my family and the minority groups that I represent, solely with the utmost integrity, respect and love. But the person who I forgot to love the most amongst that, was myself.

"I love Darvid and he has a good heart but unfortunately we ended up being two different people who wanted different things and that’s just that. No infidelity, no hate, just a pressure cooker... I still love him dearly and have no regrets choosing him. I just wish the world was a little more gentle on us in the time we had."

She ended the post wishing Darvid "all the very best" and sharing that she has a "massive healing process to start". 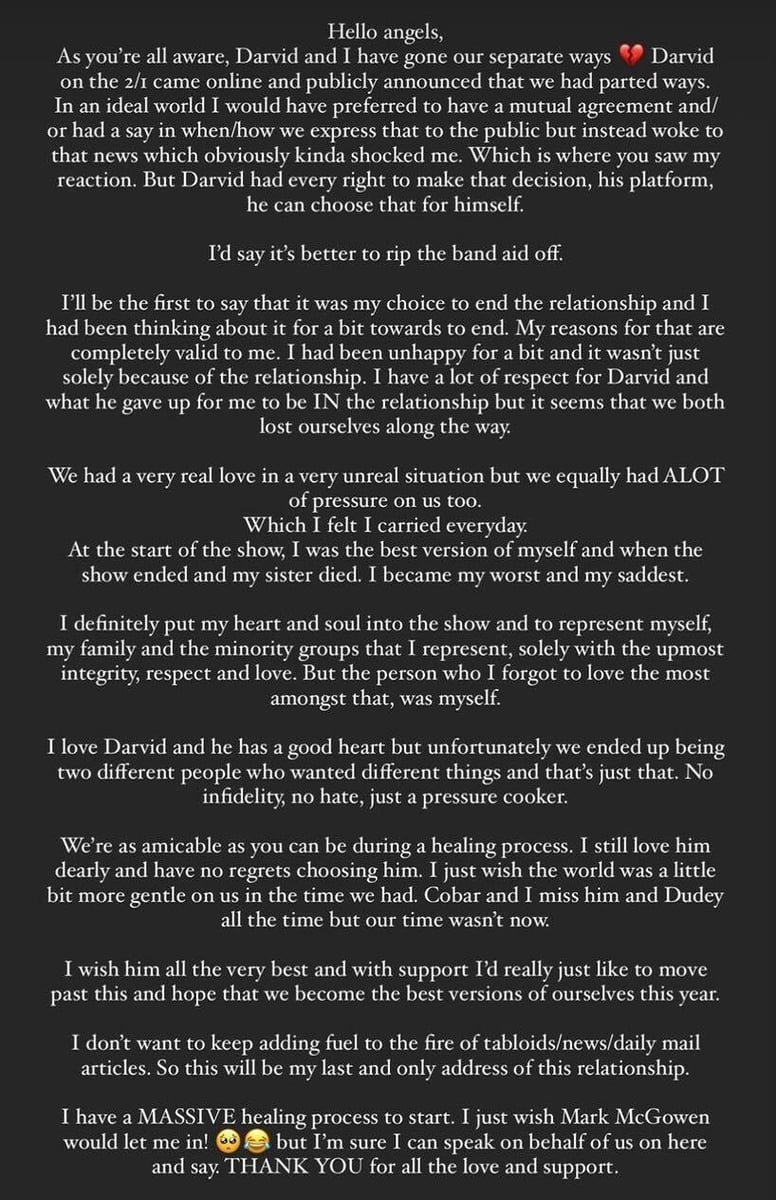 According to the podcast, the former couple did spend New Year's Eve together, as well as Brooke's birthday party on January 1, 2022. But it was at the birthday event where things soured.

"Things weren't good between them but they were trying to work through it. Darvid was really drunk and acting erratically. Brooke wasn't drinking too much. They had a big argument, Brooke told him to leave her birthday, so he left," host Megan Pustetto said.

Two sources from Darvid’s camp said he was "embarrassed" and "very upset". Brooke allegedly saw the decision as a "knee-jerk reaction".

Brooke opens up about the breakup.

Appearing on NITV's The Point on Tuesday night, Brooke shared that the aftermath from her appearance on The Bachelorette has been "bloody tough".

"It was actually a private breakup until he decided to go live and put it out to the world. I had no choice in any of it going public. I feel like it was just to humiliate me to have one over me. I was silenced, I was defenseless, and I just had to cop it," she shared.

For Brooke, the pain of going through a public breakup was made worse by the outpouring of criticism and questioning online.

"Being in the public eye already is so difficult but dealing with trolls, criticism and putting yourself out there in a very vulnerable place is already so hard to navigate," she said.

"Adding the layers and complexities of a very public relationship ending from a show that doesn't have the biggest success rate for relationships working out - it's a lot of pressure."

Brooke also noted that she received some hate at the time, which was disconcerting.

"It was more the tabloids and online forums really writing the negative commentary and it was just all rumours, speculation, and assumptions. I had cheating accusations put on me. I had no say."

But for Brooke, there were some key learnings to take from the experience.

"I think I had a lot of responsibility weighing on me but I gave it my all and what I've learnt is not to be so hard on myself. I still pinch myself that every day I was able to be a part of something that's never been done before on a Bachelor franchise," she said.

"I have no regrets to doing the show at all. I reckon the gravity of it and what it meant for people - for First Nations People and also the LGBTQI+ community - to have that representation outweighs any negative. Yes, the relationship didn't work, but seeing that on mainstream TV was enough."

Shortly after NITV's The Point dropped, Darvid took to Instagram sharing a news.com.au article on the matter, writing: "When will it end?  This was never my intention...

"There's a lot more to the story that hasn't been shown. I've stayed quiet in hopes it would simmer out, incredibly confused as to why it's being dragged on." 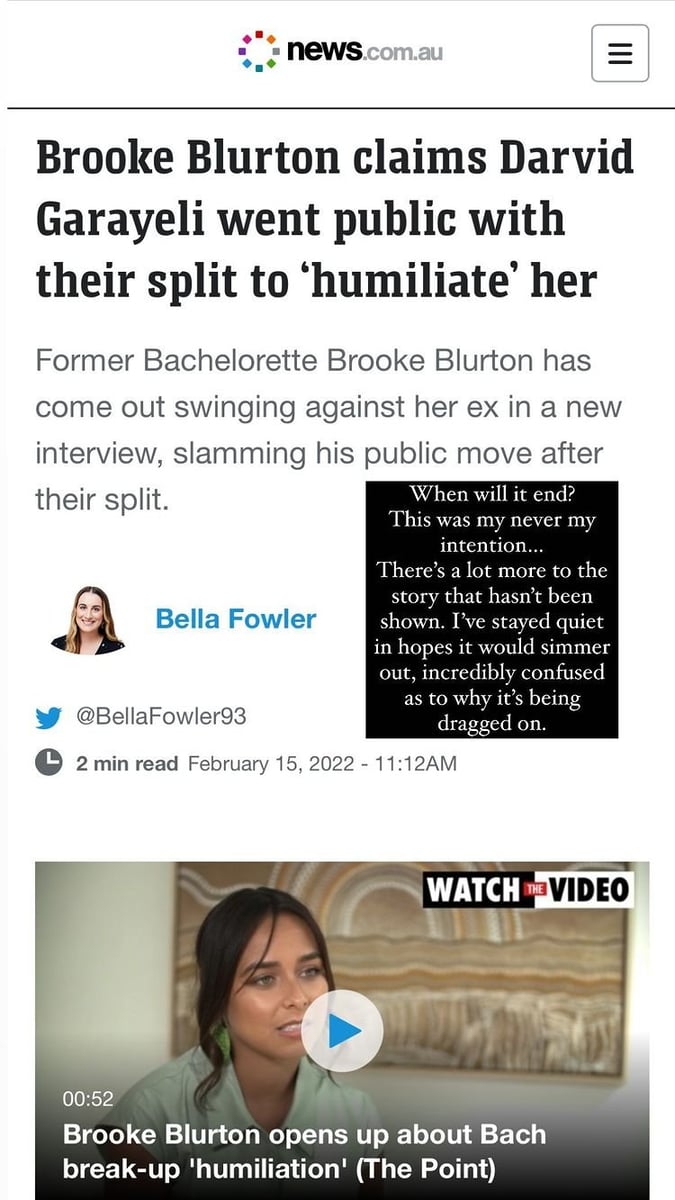 Reply
Upvote
Even if they aren't, don't they still have to pretend to be together for a few months after the finale airs?
F
flyingdale flier 9 months ago