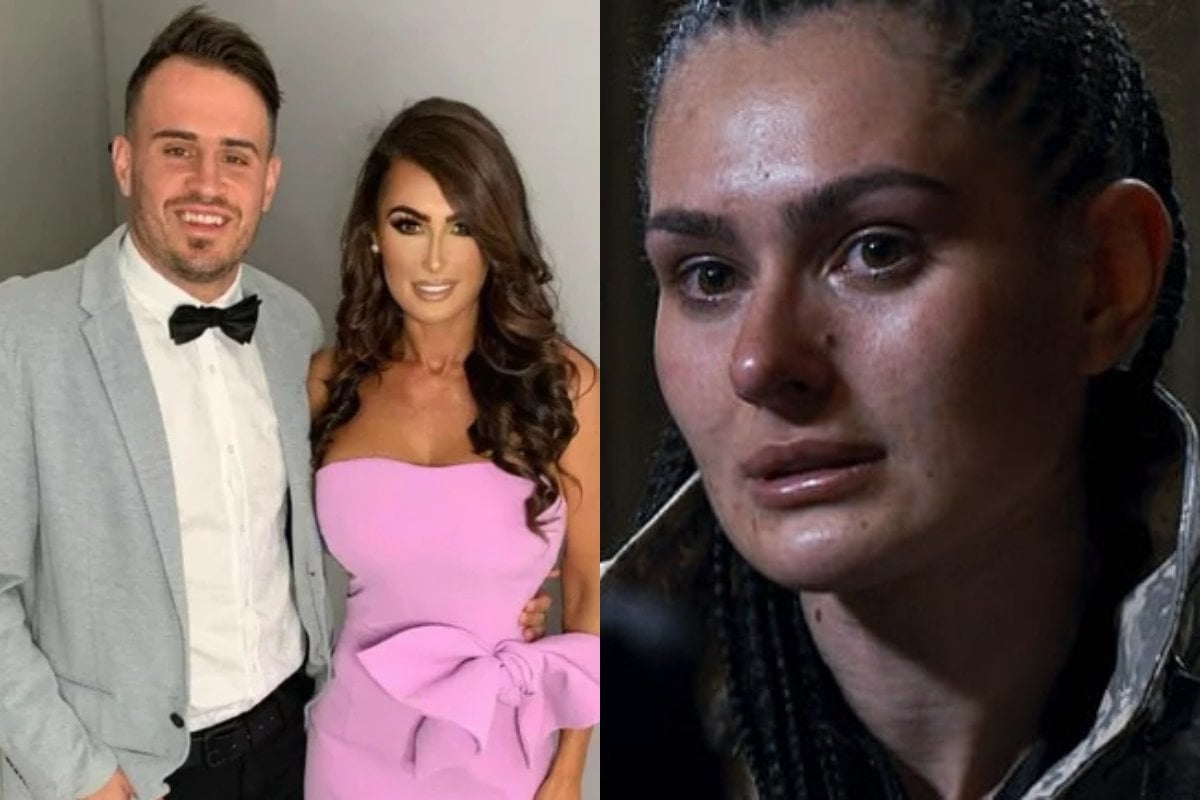 On Tuesday's episode of SAS Australia, model Arabella Del Busso faced scrutiny from the instructors about her past relationship with NRL player Josh Reynolds.

It was likely a familiar position for her: The media storm surrounding their relationship has been nothing short of intense.

For months, there had been plenty of speculation about what happened between the two, and what emerged resembled the story line of a Netflix series or true crime podcast.

"The best baseline to ever start with is honesty, integrity and truth," ex-soldier Mark Billingham said.

"To me I'm looking at you and I can see deep f***ing issues in your face right now, once you knock down all that crap and you’re true to yourself then you can rebuild."

Recruit #4 Arabella Del Busso finds out that there's no running from the truth when being interrogated by the DS. #SASAustralia

Del Busso was asked why she was painted as a liar in media posts.

"My ex-partner was an NRL player and obviously we separated late last year, but now since then I've faced scrutiny in the tabloids," she said, explaining her lies weren't as bad as the media portrayed.

"I told my partner that I had a pregnancy scan and I showed it to him and said it was ours when in fact it wasn’t our scan at all.

"Our relationship was coming to an end and I didn’t know how to deal with losing someone because I feel like I’ve lost family members and stuff [before]. [I was doing it] to try to draw him back in."

Instructor Billingham told her "you can't move forward in life if you can't be f***ing honest." 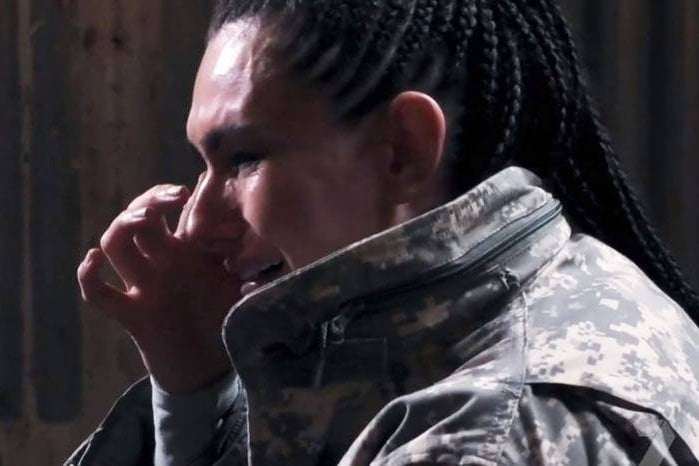 However, Del Busso continued to claim her lies were harmless.

"I have told a lie but the way that I see it a little white lie here or there is not going to hurt anyone," she said.

"I'm sure we all do it, I'm honestly not the only person in the whole of Australia that has told a little white lie here or there. People will judge me no matter what but they haven’t lived my life, they don’t know the extent of things that I’ve been through."

The following morning, Del Busso decided to leave the show.

After her exit, her cast mates shared their thoughts.

"She almost didn’t want to open her mouth in case a skeleton or a bone came out of her mouth," actor Firass Dirani replied.

What happened between Josh Reynolds and Arabella Del Busso?

In May, Del Busso spoke about their relationship for the first time during an episode of 60 Minutes.

In the footage, Reynolds shouted at Del Busso as she sat on his bed, saying she “scared the f*ck out of [him]” and asked her to leave.

Then it emerged Del Busso, 30, was accused of faking three pregnancies and miscarriages throughout their relationship. She also allegedly duped Reynolds out of money with lies, including the false death of her mother.

The charges against him were dropped in February.

On 60 Minutes, Del Busso said she was “setting the record straight”.

“Especially with headlines, you know, people think I’m a psycho, they all think I’m crazy,” she said during the show.

Reynolds and Del Busso met in 2018, and their relationship began after Del Busso claimed she was pregnant with twins following their one night stand.

She said she was looking forward to becoming a mother, and the couple even had a gender reveal party.

But Reynolds, who was also interviewed for the story, said he felt things quickly turned a “bit fishy”.

“The things that really got to me, hurt me, were every time there was a scan, there was always an excuse,” he said.

In January 2019, Del Busso told Reynolds she had miscarried.

“At that stage I was so into this whole relationship, baby thing, that I was hurting so much. It broke me,” Reynolds said.

In June 2019, Arabella told Josh she was pregnant again, making this her third pregnancy in six months. But Josh says something was off about the ultrasound scan she sent him. #60Mins pic.twitter.com/SUMTv7BRid

Soon after in March, Del Busso told him she was pregnant again, but just weeks later she miscarried again.

In June, Del Busso announced her third pregnancy – twins, again – and the couple were once again over the moon.

Then Reynolds showed his friends Del Busso’s 12-week scan, and their reaction was not what he expected: They told him it looked to be fake.

“The scans she sent me was off,” he said.

Del Busso admitted to showing him a fake ultrasound to be “spiteful”. Soon after their ultrasound argument, Del Busso told Reynolds her mother had died. When asked about this during Sunday night's episode, Del Busso said it was not her biological mother - who is still alive, and spoke to the program - but the woman she called 'mother' who had died.

She said she had not explained this to Reynolds at the time.

Then came even more bad news: Del Busso told Reynolds she had a condition called placenta accreta, a serious pregnancy condition that occurs when the placenta grows too deeply into the uterine wall. She told him she could die from the condition.

"Funnily enough, again we were going through a bad patch and now I think about it, that was the ploy. Every time I looked to push away, she'd make up something new: placenta accreta, miscarriage, family dying, whatever else she made up and it makes sense because it's how I got roped in every time," Reynolds said.

The penny dropped when Reynolds visited Del Busso's supposed obstetrician, who said he had received no information from her.

"Is faking pregnancies normal? Is faking your mum's death normal? Making me go through all that. Is it? I would love an answer from her," Reynolds told 60 Minutes.

Del Busso moved to a neighbour's house, where the neighbour discovered her taking medication she claimed was for the placenta accreta, but was actually IVF medication.

Del Busso was asked whether she lied about the pregnancies, to which she replied, "I'm denying those claims".

"Is that a no?" reporter Tom Steinfort asked, seeking clarification.

"I didn't say that," Del Busso said. "I've got nothing else to say about that."

Reynolds said their relationship ended just before Del Busso accused him of domestic violence and police arrested him on charges of assault.

Reynolds maintains he never once got physical, and said he was not proud of the man in the video leaked to media, which showed him yelling at her.

The 31-year-old said he would always regret his actions in the video.

"That 28 seconds is something I'll never be able to take back in my life... I never want to be that person ever again," he told 60 Minutes.

The media reports around his arrest led to 10 different men reaching out to him to claim they had been duped by Del Busso, under various pseudonyms. She had allegedly told them lies such as she had brain cancer, cervical cancer and her mother dying.

In 2018, one ex successfully sued her for fraud and obtaining money by deception, 60 Minutes reported.

With this evidence, police dropped charges against Reynolds in February, but he said he was still tortured by what happened during their relationship and how it has tainted his name.

"I had a school ring up, I get a call in the morning saying, 'you don't have to come in because parents don't want you at the school'. That hurt me, because the case is over but it's still lingering," he said.

"Kids are everything to me… it was a hard moment. And I act tough in front of all my friends and that, but that broke me."

He still had questions about Del Busso's third pregnancy.

Del Busso told 60 Minutes the pregnancy was terminated in December last year, meaning she would have been more than six months pregnant at the time.

Why was Arabella Del Busso on SAS Australia?

Channel 7 received backlash for casting her as one of their celebrities in SAS Australia, as Del Busso's only notoriety was due to her relationship breakdown with Reynolds.

According to the Courier Mail, contestants on SAS Australia received up to $150,000, adding to the criticism of the decision to sign her.

And Del Busso's estranged mother told the Sydney Morning Herald she was "disgusted they would put my daughter on air as a celebrity".

"It's bad enough she has hurt Josh Reynolds - now they are rubbing his face in it by paying her to be on TV," her mother Isobel Preusker told the publication.

"He doesn’t deserve this, not from her. He has been through a lot and had his reputation questioned or ruined by her. It’s disgusting. It really should be criminal.

"She has hurt so many people. She owes money everywhere. She has hurt people, ruined lives.

"What kind of message does this send to people through society? What does that tell people? Behave like this and you get fame and money. The people who make these decisions have questions to answer."

This article was originally published on May 31 and has been updated.

M
meganrsaw a year ago

Reply
Upvote
I had no idea who she was as we don’t really have that code of football in WA. She sounds like a very desperate woman who needs to stay out of the public eye and revive psychological help in order to move on from the mistakes she’s made.
M
missnellebelle a year ago