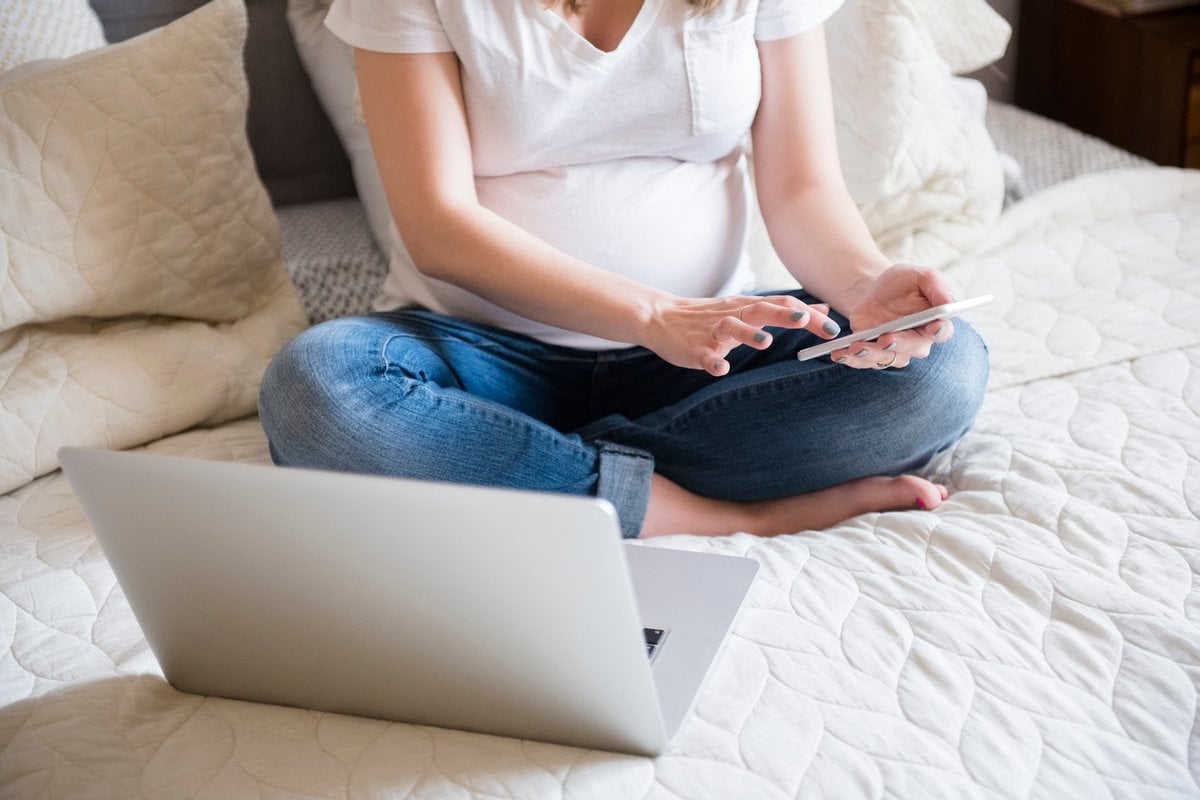 It seems crazy to me that in today’s world pregnancy discrimination exists.

That a young professional woman should be subjected to verbal abuse, slamming doors and silent treatment at work because of her personal choices.

But it happened to me. Here's my story...

Side note: Be a good mum. Post continues below.

About two years ago there were movements in my team at work.

A senior colleague of mine had been promoted, and the drama around who would be his replacement had commenced.

My boss and line manager both approached me and asked me to apply for his position.

I was torn. I was about to begin treatment to try for a second baby. Did I go after the promotion and put off my dream of a second baby for a few more years? Or did I stay in my current role and start the treatment as planned?

I was open about my situation with both my boss and line manager. Their response was surprising. They both still wanted me to apply.

My line manager said that being pregnant was no reason to not apply for a job; that I was more than capable of doing the job and doing it well.

"Don’t let your self-doubt stop you!" he said. "Plus, you don’t know when the treatment will be successful, you can’t put your life and career on hold."

I couldn't believe how progressive my workplace was! I was genuinely impressed by the level of support I was getting from two senior male colleagues.

I spoke to my loved ones who all encouraged me to apply even though within a matter of weeks I could be pregnant.

I bit the bullet and submitted my application. Within days I had an interview. The interview went well, but I was not offered the permanent position.

I was told that the other applicants had more experience than me. I was disappointed and part of me wondered if my possible pregnancy was a deciding factor.

On the upside my treatment soon worked, and I fell pregnant.

About a week later, in a strange turn of events, the candidate who got the job announced that they were unable to commence the role until the following year.

My boss asked if I would act in the position for the year or at least up until I needed to go on maternity leave.

How could I turn down such an opportunity?

I’ll be the first to say that there’s no way I was the perfect choice. I was quite young and inexperienced for the role. However, I was eager to learn and full of enthusiasm.

Also, logically for my company, I was a cheap and easy solution.

Our salaries were based on years of experience plus promotion award. So even with the promotion I would be barely making what my other colleagues where making in non-leadership roles.

Anyway. The backlash was horrendous.

I still suffer PTSD from the treatment I received once the news broke that I would be 'acting' in the more senior role. Here are just some of the things colleagues told me:

Even more shocking was the fact that most of these comments came from women, women of all ages and life stages.

Some of these women were mothers and grandmothers. Some were strong single females who claimed to be feminists.

Everyone at work is replaceable. You never know if an employee is going to move away, take a position elsewhere, change careers, retire, get sick, or go on long service leave.

It is not an argument that you shouldn’t hire someone just because they’re going to have to take some time off after they have a baby.

At my first senior management meeting it was made very clear by everyone except my boss and line manager that I was not welcome.

If I dared to offer a suggestion I was shut down, spoken over, or met with death stares.

The saddest thing about this is that they didn’t recognise the importance of having someone like me at the table.

On that major decision-making table I was the youngest, at 29, and the only female under the age of 50. In a female heavy industry that statistic was just plain sad.

It would seem that for a young female to be in a senior role, they must be without children, married to the job and happy to stay that way.

I did my best at the job but was filled with doubt and constant thoughts that I wasn’t good enough because I was pregnant. I made mistakes; mistakes I probably wouldn't have made without all that pressure.

I had staff actively get up and leave the office whenever I entered, storm out, give me the silent treatment. I was verbally abused and left out of vital conversations.

Part of me knew that taking an opportunity whilst pregnant would bring some backlash but I truly had no idea that it would be this bad.

So, would I do it all again? Would I take an opportunity knowing I was pregnant? Yes.

Because you should never, ever be made to feel like you are unworthy just because you have working ovaries, are growing a baby, or trying to conceive.

Don’t let anyone ever tell you that you should feel ashamed for taking an opportunity. Do not be side lined or fearful to apply for jobs. Stand proud and break down those barriers.

You owe no one the right to dictate your career aspirations or family timeline. You have the right to work free from discrimination.

Reply
Upvote
1 upvotes
I suspect there was more than one layer to the discrimination here. The author has connected the dots and assumed that the pushback and comments she received were due to her pregnancy, when in fact she has also identified that she was ALSO a young, inexperienced person who was recruited out of convenience and low cost to her workplace. Her position was to be temporary, as she was holding a place for the preferred candidate to take over a year later. That immediately rings alarm bells for me: she's being put into a position of potential vulnerability if she is promoted with a lack of credentials into a senior role.
I don't doubt there were people who thought it was inappropriate to appoint someone who was pregnant to that position. However, she may have been excluded and under-estimated also due to her inexperience - whilst being "eager to learn and full of enthusiasm" is all well and good, it's no replacement for actual experience and seniority. In those matters, her pregnancy may not have had anything to do with the way people behaved towards her.
M
mustlovebooks 3 months ago

Reply
Upvote
I had very different experience to yours. My workplace was a refuge after getting transport to work & asking for a seat up to 36weeks. When I was pregnant I noticed & recognised the occasional woman in my workplace that responded to my pregnancy. I gave them space & if they ran away from me I didn’t take it personally- as I’d guessed they’d had a difficult past. Lost one friend that insists she doesn’t want kids. If sadness/envy is there give them space..
News
General
Opinion
True Crime
Politics
Sport
Explainer
Entertainment
Celebrity
Reality TV
Movies
TV
Books
Rogue
Royal
Lifestyle
Beauty
Fashion
Weddings
Home
Wellness
Health
Fitness
Travel
Food
Parents
Before The Bump
Pregnancy
Baby
Kids
Teens
School
Parent Opinion
Work & Money
Money
Finance
Career
Lady Startup
Relationships
Sex
Dating
Separation
Friendship
Family
Real Life
Couples