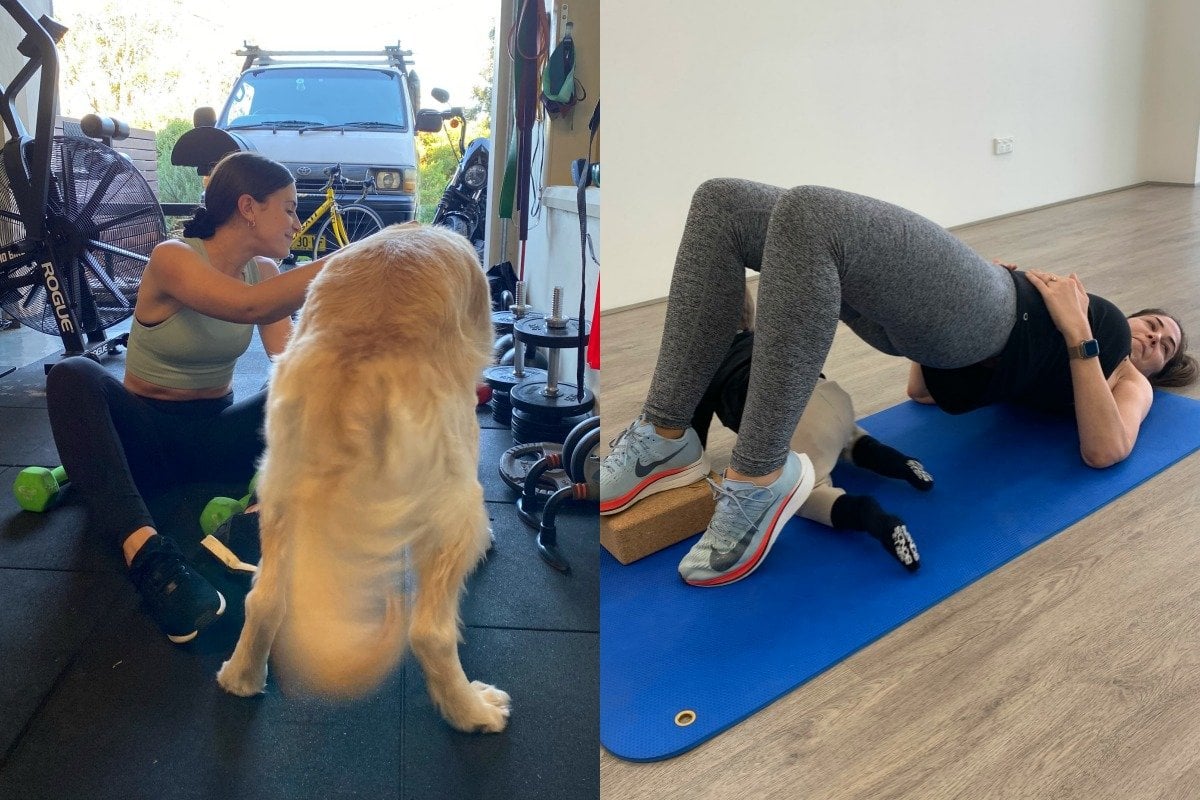 In Mamamia’s Roadtest series, real women roadtest the latest trends, treatments and techniques you need to know about - and share their honest thoughts. If it's out there, you can bet we've tried it. This week, two Mamamia editors trial the latest smart fitness options. Executive Editor Leigh Campbell signs up for Apple Fitness+, while Lifestyle Editor Tamara Davis straps on the Fitbit Versa 3.

"I really need to get my butt into gear": Leigh roadtests Apple Fitness +.

There used to be a time when I would jump (literally) at the chance to try anything new in the fitness world. When KX Pilates first opened in Sydney I was in one of the very first classes. Remember the time when acrobatics was something people did for exercise? I was all over that.

Then 2020 happened and I also juggle a toddler (not literally) and work and general life and well, I’m basically a pro at making up reasons why I can’t fit in exercise these days.

So when Apple asked me if I wanted a sneak preview of their new ‘Fitness +’ offering I said ‘yes’ with about as much enthusiasm as a dog on the way to the vet to get desexed.

But I said yes for two reasons. Because I really need to get my butt into gear and move my body more for my mental health after such a stressful year. And secondly, because I assumed Fitness + was just some software update whereby instructions of how far to jog or how many squats to do would show up on my Apple Watch.

(Side note: my Apple Watch has been the most surprising MVP of motherhood - parents never have enough hands so the Watch lets me leave my phone in my bag/kitchen for hours but I still get important calls and notifications on my wrist).

ANYWAY. Let me try to explain to you what Fitness + really is.

Have you ever been like, “I really feel like doing some deep stretching but I hate that Enya crap they play at yoga studios and I’ve only got 10 minutes spare… so bugger it, I’ll just scroll Instagram instead”?

Or said to yourself, “I love going on the rower at the gym but it’s a bit lonely, I wish rowing was a group thing.”

Or even “does my dorky uncoordinated dancing count as exercise?”

Then I reckon you’ll like Fitness +. Basically Apple have got a huge bunch of qualified fitness professionals (as opposed to random fitspo accounts on Instagram) to create an eye-watering amount of workout options so that there is literally something everybody would enjoy. They create lots of new workouts every week so it’s not just the one library of clips.

You can navigate it in heaps of ways. Because I’m feeling lazy AF right now I immediately sorted through it by time, telling my phone (you can also use it on iPad or your smart telly) that I only wanted to work out for 10 minutes.

Then I told it that I wanted to work out to a hip-hop soundtrack (I hate dance music!). From what was served to me I then picked the Strength class because I was at home and could do it on my living room floor. 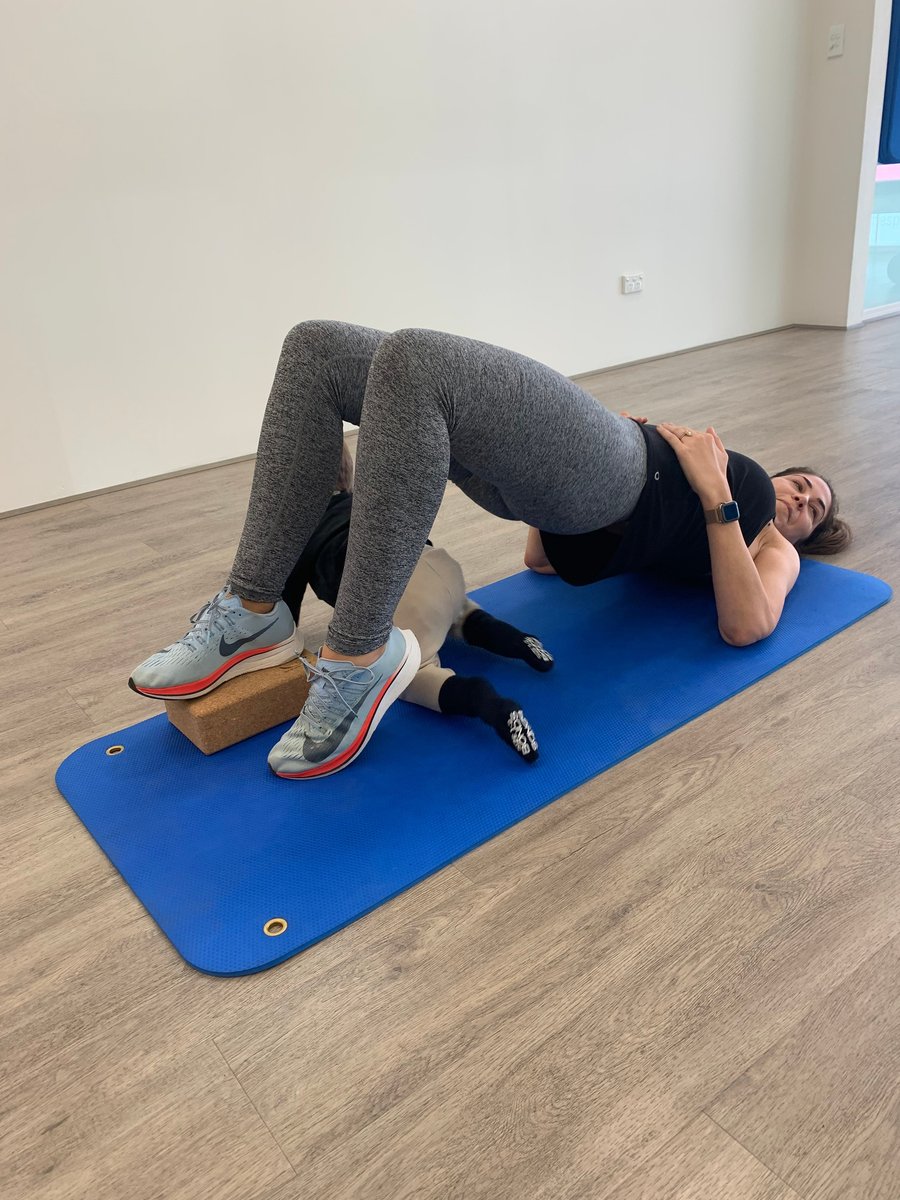 And that’s a lot of the joy - you can use it anywhere. There are programs for in the gym which use equipment like a rower or treadmill, but there’s also heaps of stuff you can do in your bedroom or at the park because you don’t need anything at all.

Also really important to note is that you don't need to have exercised ever in the past to use it. So many online fitness platforms assume some prior experience or knowledge which can be intimidating or off-putting. But there’s a massive ‘For Beginners’ library, and by beginner I mean there is literally stuff for people who struggle to get up off the floor.

Surprisingly (because I’m the world's least coordinated human) my favourite category is the dancing classes, but you can also pick from yoga, high intensity interval training, strength, core, cycling, treadmill, rowing, and even mindful cooldown - how zen. It’s basically like every fitness app that’s out there all in one.

I think I also really enjoyed these workouts because of the playlists. I realise now what used to frustrate me about other apps I’ve trailed is that you can’t play your own music at the time or you’re at the mercy of the music picked by the instructors. On Fitness + you get to choose the tunes.

I don’t expect I’ll be donning mahogany fake tan and flexing on a weightlifting stage anytime soon, but I gotta admit, it’s a pretty cool platform with so much on offer than even I found it hard to make an excuse not to exercise.

"I'm not exactly a gym..person": Tamara trials the Fitbit Versa 3.

Unlike my good friend Leigh, I don’t have a small child to defend myself against my general laziness. I’ll spring for a few yoga classes a week which I genuinely enjoy, and I walk the dog every day, and that’s the extent of my exercise regime. Ironically my partner is a CrossFit coach with a fully decked out home gym, which I take completely for granted. 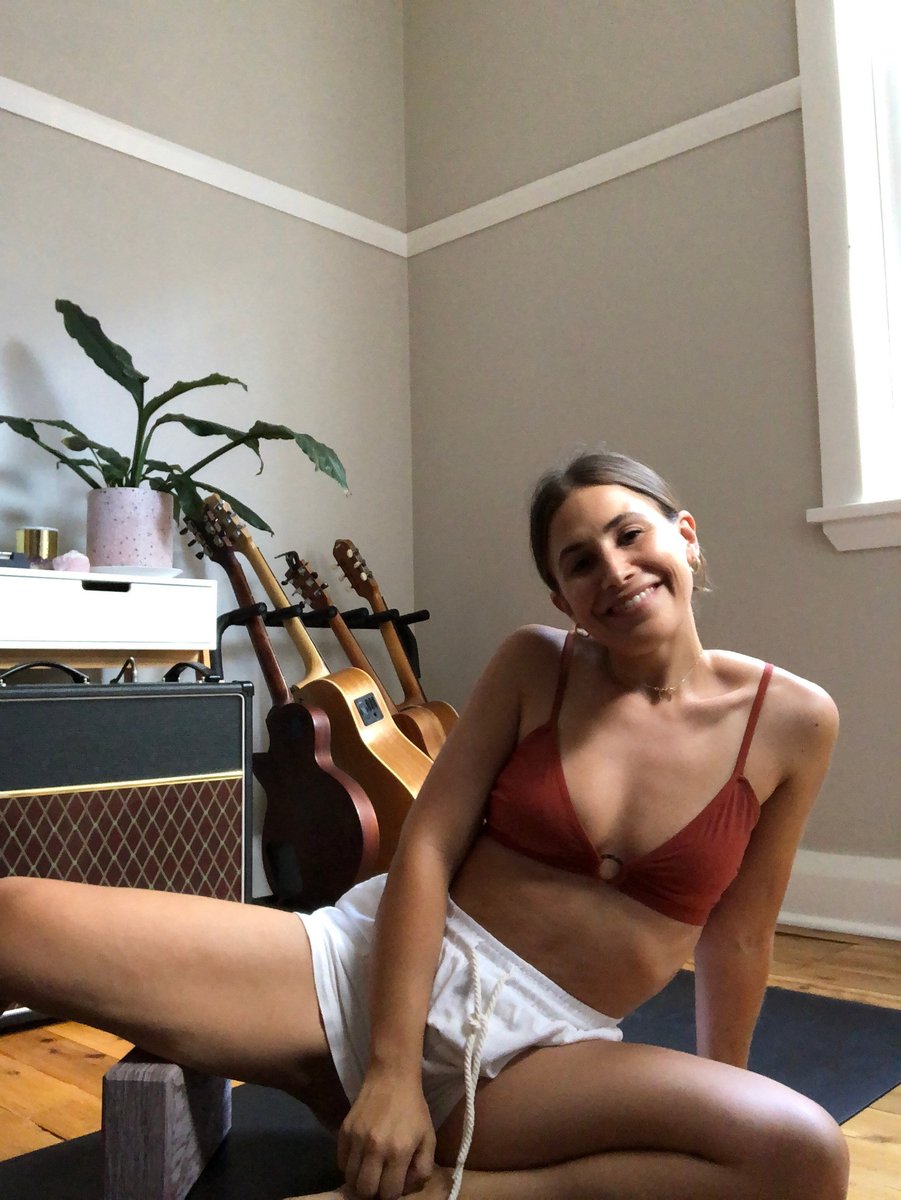 I gave the people at Fitbit full disclosure that I’m not exactly a gym... person, and they said to give the Versa 3 a go anyway - apparently, there are lots of sneaky ways the device helps motivate you, so I was interested to see if they would work on me.

Their much-loved Versa model was upgraded this year with a heap of new health and fitness features - as well as a legit built-in microphone and speaker and the choice between Google Assistant and Alexa. Yep, you can speak into it and make it do things for you! Nifty!

If you’re new to smart watches like me, the device does take a bit of getting used to in terms of knowing where all the widgets are and how to master them. For me, I simplified it by focusing on getting to know the features and apps I’d actually use.

Upon activating my device and syncing it with my iPhone, I prioritised linking it up with my Spotify. The Versa 3 lets you control Spotify from your wrist, and knowing I could head out on a walk with my doggo and switch tracks in my playlist without having to mess around with my phone was super handy.

Another thing that surprised me was the little guy that jumps up on your watch at various times throughout the day to remind you to get off your a*** and move. When you meet your movement goal, he throws a little party on your wrist to celebrate.

And by movement, that literally just means getting some steps in - the goals aren’t super ambitious. For me, that looked like leaving the home office for a coffee run. And ta-da - I've done 249 steps. No biggie, just a fitness queen over here.

I jest. Admittedly, the thing I got into most was the mindfulness and meditation tools. According to Fitbit, this year has seen a drastic uptake in users practicing yoga and Pilates compared to last year. Meditation is up by a whopping 3,508 per cent, which is not exactly surprising data given what’s gone down in 2020. The Versa 3 offers guided meditation sessions (where you focus on your breathing) which are personalised according to your heart rate. I’ve been doing these in the evenings before bed.

The device also lets you set weekly mindfulness goals and build on your practice from day to day. If you're new to all this, it's a really approachable way to get a bit of calm time into your workday. It might only be for two minutes, but who's counting? Literally no one except you. 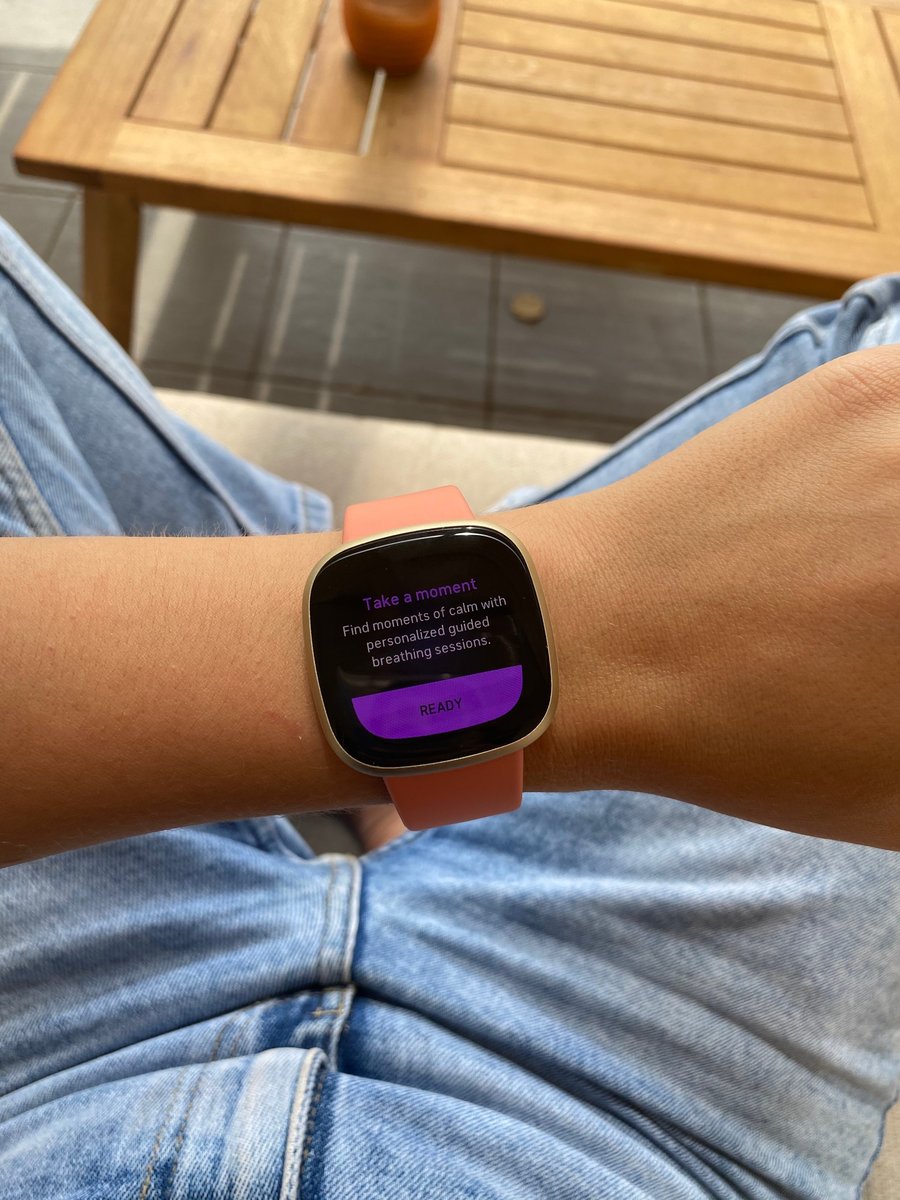 The Versa 3 also offers guided workouts, and there are high-tech tracking features for people who are engaging in consistent exercise. If you’re a runner or cyclist, or into your Bootcamp or HIIT, you can use the in-built GPS to measure things like the intensity of your workout or your pace and distance. I’ve watched my darling fiance use a pen and a sheet of lined paper to do this for years and he’s an actual fitness coach, so having a digital way to track your progress from your wrist is pretty savvy.

At any point in the day, the device can give you a quick glance at your step count, heart rate, how many calories you've burned, your sleep score - and you can log your food and water intake to keep your daily health in check, if that's your thing.

Of course, it’s also a smart watch and I’d be lying if I said the message and call notifications weren’t a bigdraw card for me. But what blew my little mind is that you can use it to accept and answer calls from your phone via Bluetooth (if your phone is nearby.)

Guys, the future is now.