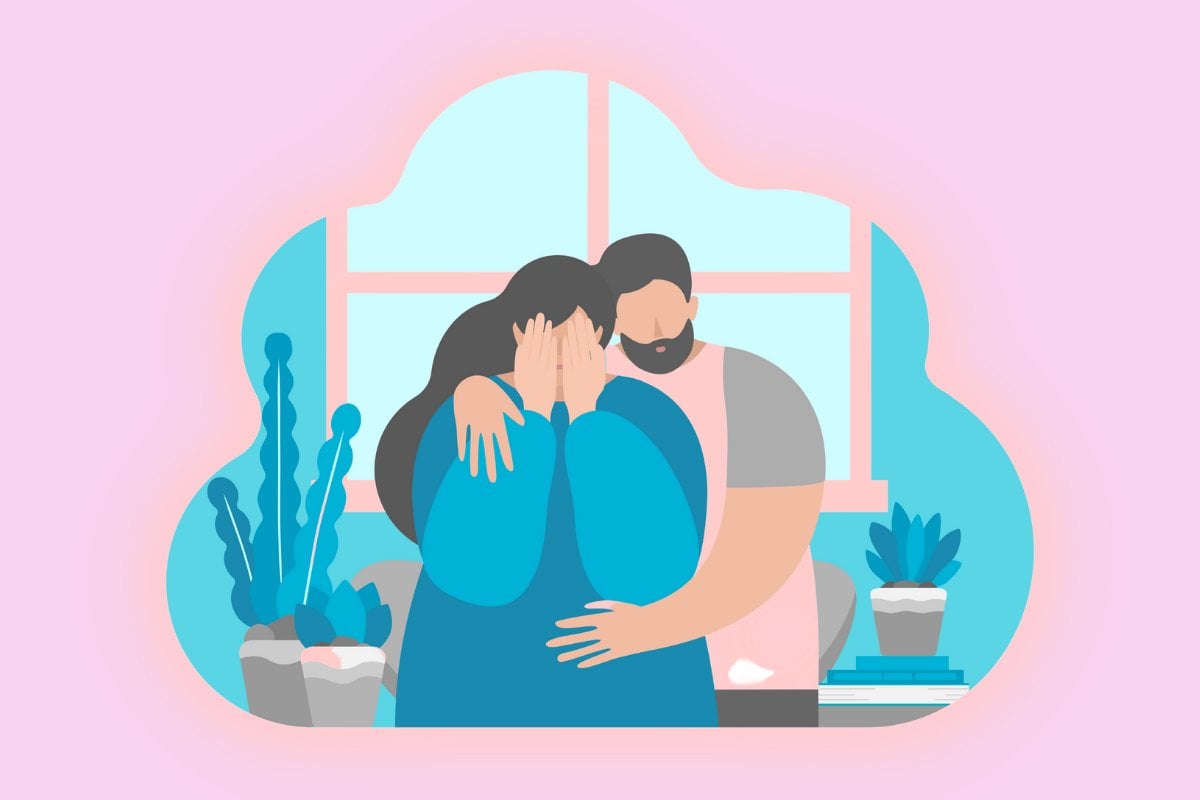 While love languages are obviously of huge importance, your apology language is just as crucial - as it is the way we forgive and express an "I'm sorry".

Human nature means each individual functions differently, and while an admittance of wrongdoing such as "that was not okay, and I am sorry," works for some - it definitely doesn't work for everyone.

That's where apology languages come in.

Watch Mamamia's How To Apologise Effectively. Post continues after video.

Why do apology languages matter?

People mess up, and expressing remorse, taking responsibility and accepting blame are all key to delivering a well-meaning and real apology. However, the delivery of an apology can sway from acceptable to err, not so acceptable.

So knowing all about apology languages, and expressing the right ones to those around you - especially your partner - can lead to fulfilling, and longer-lasting relationships.

Gary Chapman, Ph.D. and psychologist Jennifer Thomas, Ph.D. developed and created the apology language system, in an effort to cater to the multitudes of ways people want to be approached with an apology.

Chapman and Thomas delve deeper into apology languages in their book: When Sorry Isn’t Enough.

While there are many people who can lean more strongly into one apology language, it is very possible that you can have more than a few depending on the situation.

Here are the five apology languages, what they mean and how to recognise which one you connect the most with.

This apology language is key for people who believe words only mean something if remorse is evident.

Remember that for this specific language especially, the apology doesn’t count if someone is only saying sorry because they got caught.

While saying "I'm sorry" is a good start, for those whose apology language is expressing regret, they need to understand why you're sorry and feel that genuine guilt and there is a true responsibility over their actions.

It's always easier to say "you were right", instead of "I was wrong", but the weight of the latter can go a lot further.

While it may feel like sometimes people can sweep an apology under the rug, those with this apology language require a person to fully and completely accept fault before forgiveness comes into play.

Those who feel someone who has wronged them should make amends and search for ways to correct the problem, likely feel more inclined to believe making restitution is the apology language for them.

While some people prefer just an admittance of guilt or an acceptance of responsibility, those who fall under number three are more willing to forgive when they feel as though amends are being made to them.

A genuine act of repentance means a person reviews their actions, feels regret for their wrongs and makes a commitment to prove they have changed.

Those who feel like repentance is a genuine form of an apology will most likely feel number four is their apology language.

It doesn't always mean throwing money at the problem, or promising they will change; it means expressing genuine regret and a deep desire to cultivate a brand new, fully fledged person.

Unfortunately, it is much easier said than done.

Those who align most with this apology language feel as if though they need time and space in order to forgive someone for their misgivings.

While they don't need gifts, money or repentance to fix the problem - giving a person space to heal and rethink the situation can be just as difficult and painful.

Once you've established what your apology language is, and what your partner's is, you'll be able to empathise and adapt to make sure any conflict is addressed in the best way possible for both of you. Trust us.

What are your apology languages? Let us know in the comments below!

Reply
Upvote
I have Bipolar I was losing it basically everyday when I was married .   Being on my own I know how to control it better and when I've been a bit nasty I apologise all the time straight away .  I am a better person on my own but when I do date I make myself aware to listen to the other person then give my opinion over discreetly . Try my hardest not to argue or offend
K
katp 4 months ago

Reply
Upvote
Surely it's also part of being a self-aware human and an adult that we recognise an apology legitimately comes in many forms and learn to accept it in the form it is offered in, even if that's not our preference. And learn that maybe our preference blinds us to the fact that we have been apologised to.
We also could consider the ways that we tend to offer an apology.
N
nicholasjopson9 4 months ago

Reply
Upvote
@katp I disagree. If one is capable of communication verbally  then that individual is capable of saying sorry. There are individuals that NEVER SAY SORRY, these people are NARCISSISTS.
If you have a partner that never says sorry, you are in a relationship with a narcissist. Get out immediately
K
katp 4 months ago

Reply
Upvote
@nicholasjopson9
I am not sure which part of my comment you are disagreeing with. If there are several legit ways of apologising, surely there is more than one (subjective) way of receiving an apology even if it's not your preferred way.
Part of being an adult is learning to adapt and leaving behind the generally fruitless efforts to make those close to us change.
News
General
Opinion
True Crime
Politics
Sport
Explainer
Entertainment
Celebrity
Reality TV
Movies
TV
Books
Rogue
Royal
Lifestyle
Beauty
Fashion
Weddings
Home
Wellness
Health
Fitness
Travel
Food
Parents
Before The Bump
Pregnancy
Baby
Kids
Teens
School
Parent Opinion
Work & Money
Money
Finance
Career
Lady Startup
Relationships
Sex
Dating
Separation
Friendship
Family
Real Life
Couples