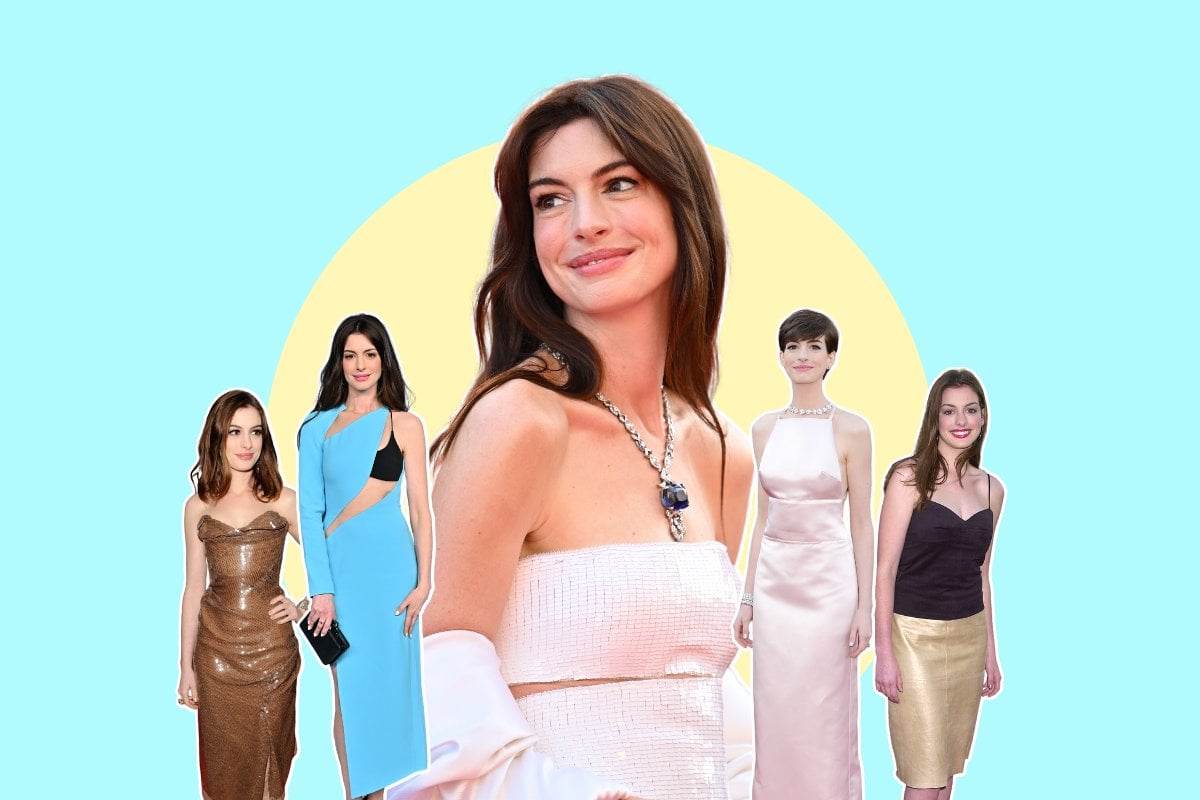 Listen to this story being read by Chelsea McLaughlin, here.

Anne Hathaway is having a moment.

She has been everywhere recently: on magazine covers, red carpets and as the face of jewellery brand Bulgari. She's been promoting Apple TV+ limited series WeCrashed, including during a pretty intensive Emmy campaign, and upcoming movie Armageddon Time, which received a seven-minute standing ovation after its premiere in Cannes.

It's not unusual for Hathaway to be booked and busy with critically acclaimed projects. That's been her thing for 20 years. But what feels different about this particular Hathaway moment is the public reaction. Mostly, that people are actually... liking and celebrating her beyond her art.

And God, is that a longtime coming.

Hathaway has had a successful career for decades, transforming from Disney princess to comedy queen to Oscar winner. She's the star of cult classics like The Devil Wears Prada and most recently, like so many of her fellow A-list movie stars, pivoted to a streaming TV miniseries.

But despite all this, Hathaway has had a strange off-screen experience of fame. She's been seen as perhaps a bit... daggy. We can point to a number of examples - like when she and James Franco were universally panned as co-hosts of the 2011 Oscars and the perceived "overly emotional" acceptance speeches she gave after sweeping 2013's awards shows for Les Misérables.

In a 2014 appearance on The Ellen DeGeneres Show, Hathaway said she Googled herself after the Oscars and discovered an article titled, 'Why does everyone hate Anne Hathaway?'. She has described it as feeling like a gut-punch.

Hathaway's sins were simply that she tried too hard and cared too much. She's the opposite of 'chill', which is the ultimate 'cool girl' mood.

Hating her was very much in vogue. So much so, there was a name for those who did: Hathahaters. 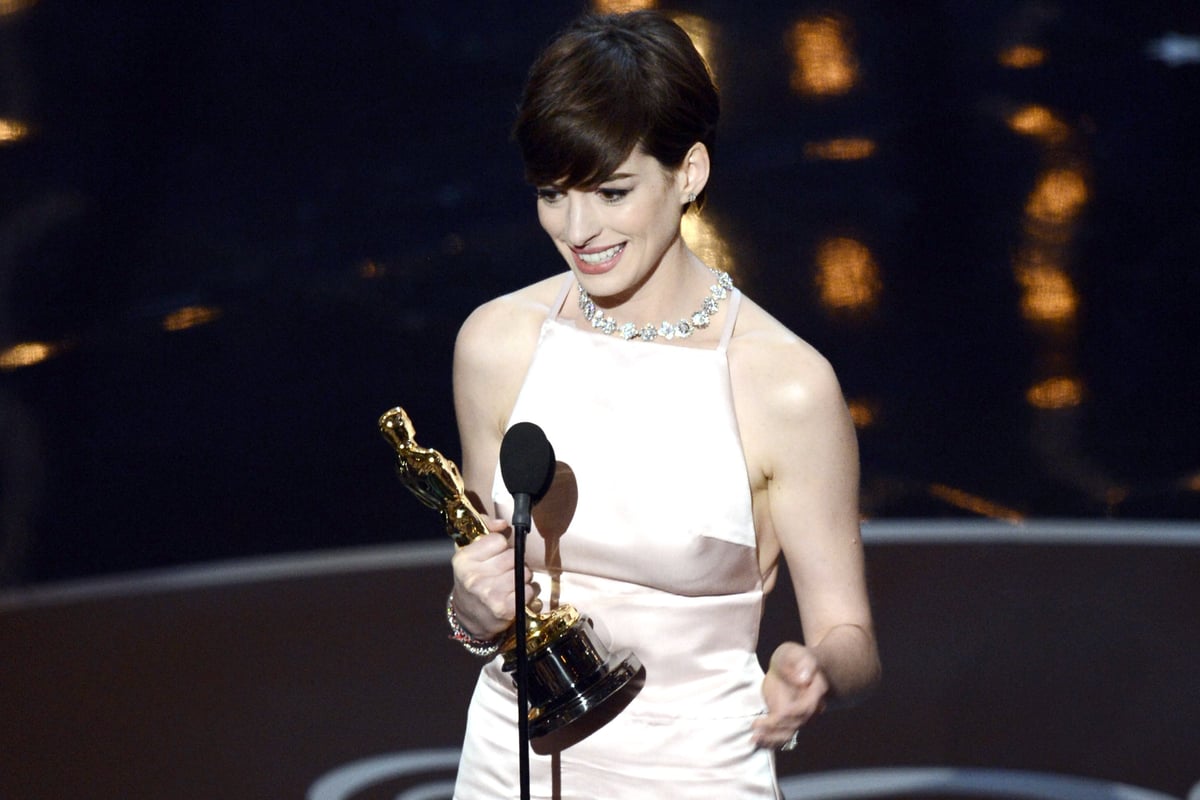 We seem to have moved past that now. The snark that followed Hathaway everywhere is gone, replaced by gushing over her recent red carpet looks and photoshoots.

There has been a lot of important dissection of the anti-Hathaway mindset and how it was born out of double-standards, sexism and a very narrow view of how women should act.

But then again, it's still happening to others. See the cultural phenomenon of disliking West Side Story star Rachel Zegler, who exudes the same intense theatre kid energy as Hathaway has, as the most obvious example.

Has society really just progressed? Or is it something else?

There are clues in the language being used around the Hathaway resurgence.

Recently, E! News found itself on the receiving end of backlash for a tweet of Hathaway and WeCrashed co-star Jared Leto at the series premiere.

"Did Anne Hathaway make a deal with the devil? She is literally ageing backward," the media account wrote (nevermind the fact that she is standing next to a 50-year-old Leto).

Did Anne Hathaway make a deal with the devil? She is literally aging backward. (📷: Getty Images) pic.twitter.com/z5jZUJFlSi

It is reductive to talk about the appearance of an accomplished woman as if it's the most important or fascinating thing about her. But look, we all can admit that the E! sentiment was correct in the sense that Hathaway looks fantastic.

However, this is not despite her age, as the language suggests.

Things get murky when we start talking about what someone 'should' look like at any given age - and these discussions happen mostly to women. Everyone's always talking about how J.Lo looks incredible for 52, but Leto's equally 'youthful' face gets far less commentary.

Maybe Hathaway's appearance is 'surprising' because she was just 18 in The Princess Diaries, so she has felt part of the cultural zeitgeist for a really long time. Or maybe it's because we still hold - even subconsciously - the view that a woman is 'over the hill' once she reaches her 30s.

Hathaway has looked the same for years, but to a society that sees ageing as the very worst thing that can happen to a woman, that fact affords her far more cachet at 39 than at 25.

She also has a new stylist, Erin Walsh, who seems to be playing a key role in the current Hathaway 'Cool Girl' moment.

It is in collaboration with Walsh that Hathaway has this year appeared in the most celebrated, beloved looks of her career: the royal blue Gucci mini dress for her Cannes photo call, the Christopher John Rogers suit on The Late Show with Stephen Colbert, the all-yellow Valentino ensemble for a Bulgari event. 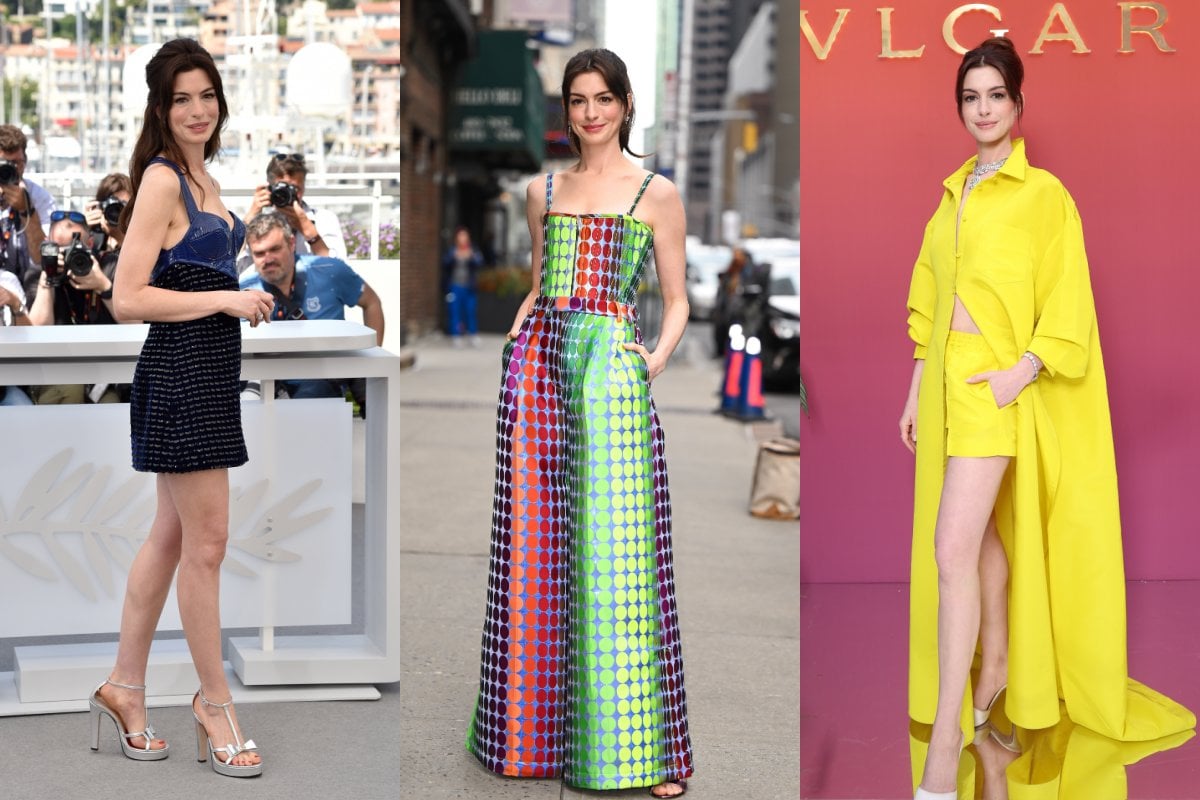 These types of looks have earned the attention of fashion bloggers and social media.

Blogs have called her a "new Anne Hathaway" and a "budding fashion icon". Vogue wrote an analysis on her "new bombshell style", celebrating her newfound risk-taking and boldness. In the 20-plus years Hathaway has been dressing for fancy events, she's never made an impact quite like she has throughout 2022.

It doesn't feel like a coincidence that this is also the time that people are finally wiling to accept that Hathaway is exactly how her collaborators have described her for her entire career: kind, interesting, respectable, cool.

We still make judgement calls on a woman based on what she looks like.

Hathaway has been a top-notch movie star for decades, and the Hathahaters period was always just misogyny in action. But it's worth looking at the timing of this renaissance with a critical eye.

If we take the tweets and headlines at their word, it's all because Hathaway finally looks like the movie star she's always been. It seems that even now, for women in the public eye, it's not their performances or personality that counts the most, but their appearance.

Hathaway deserves to finally get her due.

It's just unfortunate that it took an extra decade and some fancy clothes for everyone to believe it.