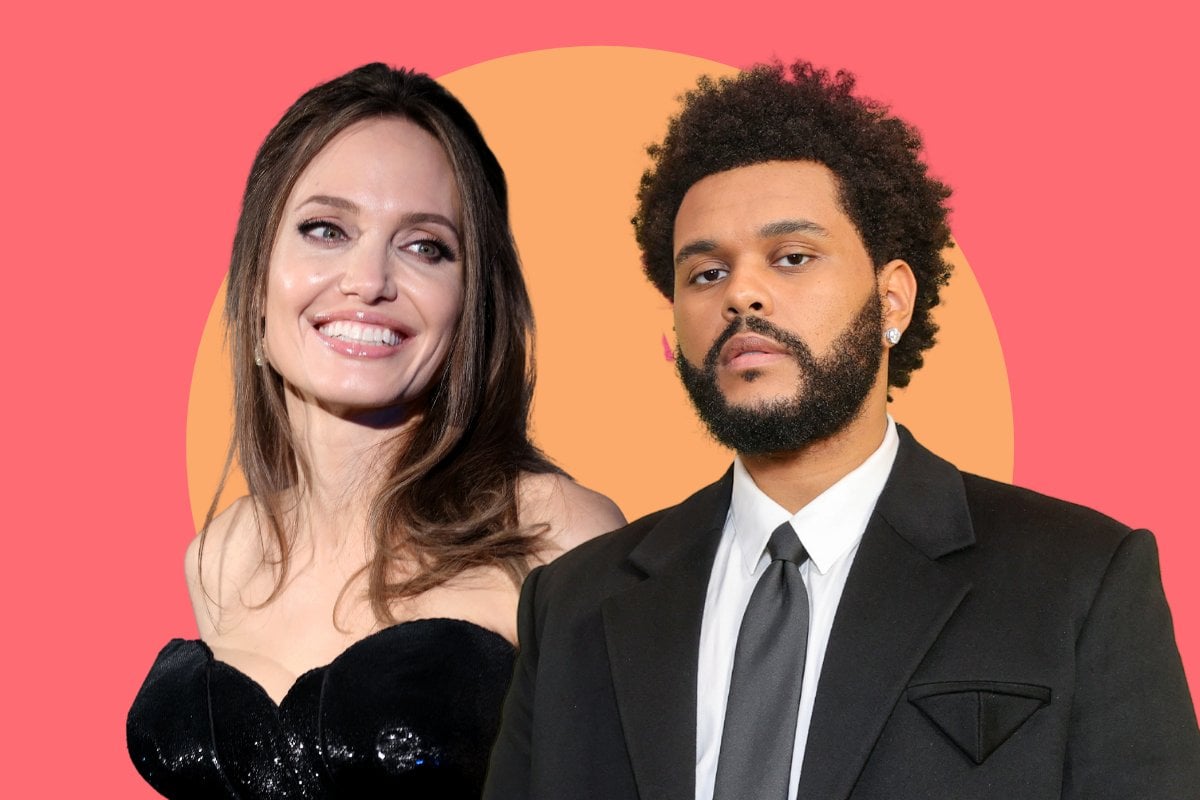 2021 is undoubtedly the year of the unexpected celebrity couple.

From the rumoured relationship between Kanye West and Irina Shayk to Megan Fox's PDA-filled relationship with Machine Gun Kelly, the list just keeps on growing.

Now, it seems Angelina Jolie and The Weeknd might be joining the mix.

Speaking of celebrity couples, Megan Mullally and Nick Offerman are the definition of couple goals. Post continues below.

Are Angelina Jolie and The Weeknd dating?

The actor and singer were first seen publicly together in July, when the pair were photographed exiting Italian restaurant Giorgio Baldi in Los Angeles.

According to Page Six, the duo spent hours in the restaurant before leaving separately.

Speaking to the publication, however, a source suggested that the pair might have been meeting up for business reasons.

"They’re clearly not trying to hide [the dinner date]," the source said.

"He’s definitely focused on getting to the movie business. He has the new HBO series he’s starring in."

Later that night, the pair were both seen at Mustafa the Poet's private concert. However, they weren't photographed together.

While Jolie attended the concert with her kids, Shiloh and Zahara, The Weeknd was seen at the event with a group of friends.

Although the duo arrived at the restaurant separately, they were later photographed leaving together.

While the dinner date is adding to the relationship rumours, a source has claimed that their relationship is strictly platonic.

"Angelina and The Weeknd had a business meeting," a source told Us Weekly.

"It had to do with their HBO shows. They got along great, but there is nothing romantic happening between the two of them."

It was announced earlier this year that The Weeknd would co-write and executive produce a new HBO Max series titled The Idol. The 31-year-old will also star in the series.

Jolie, on the other hand, recently starred in HBO Max’s Those Who Wish Me Dead.

Who has The Weeknd dated before?

The Weeknd began dating model Bella Hadid in April 2015. They later made their first public appearance in February 2016 at the Grammy Awards.

"It was a big night for him. He has worked so hard, and he did so well that night. As a girlfriend I wanted to be there to support him. Seeing him so happy when he won a Grammy made me so happy," Hadid told Glamour at the time. 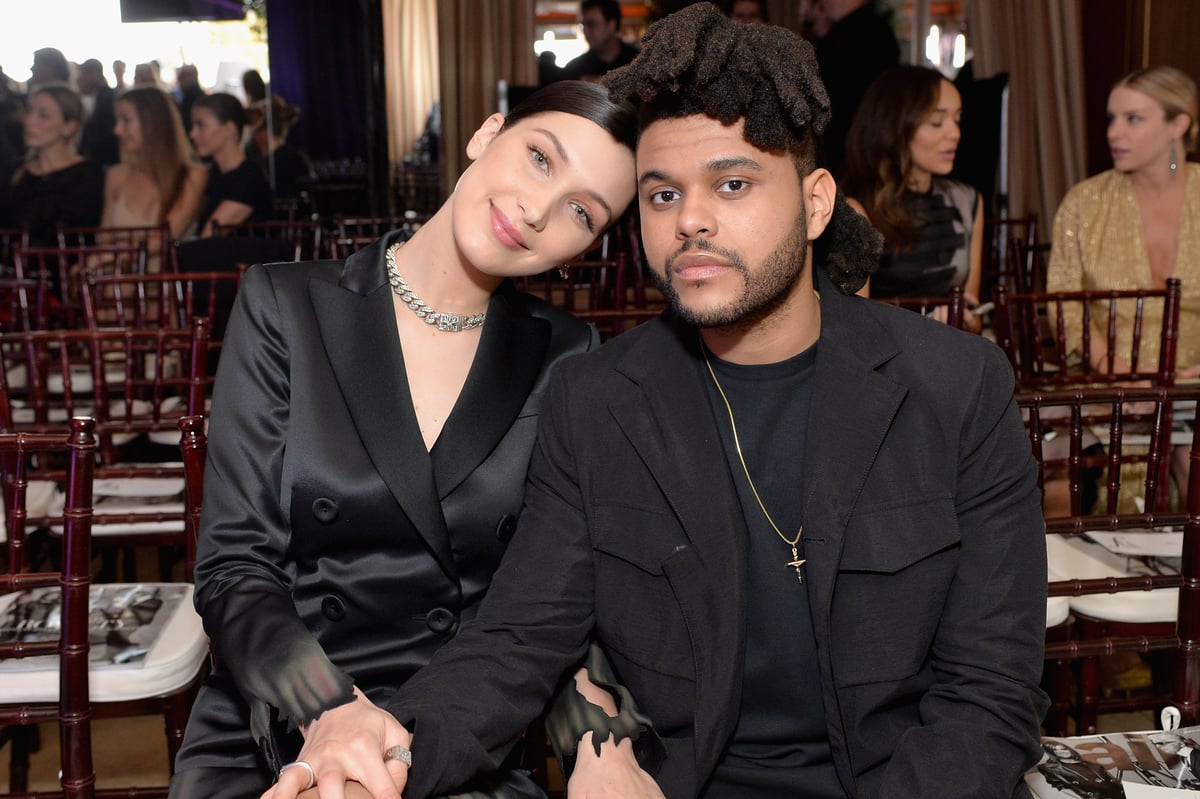 In late 2016, the couple split amicably.

The Weeknd and Gomez dated for just 10 months, prior to Gomez's brief reconciliation with her ex-boyfriend Justin Bieber. 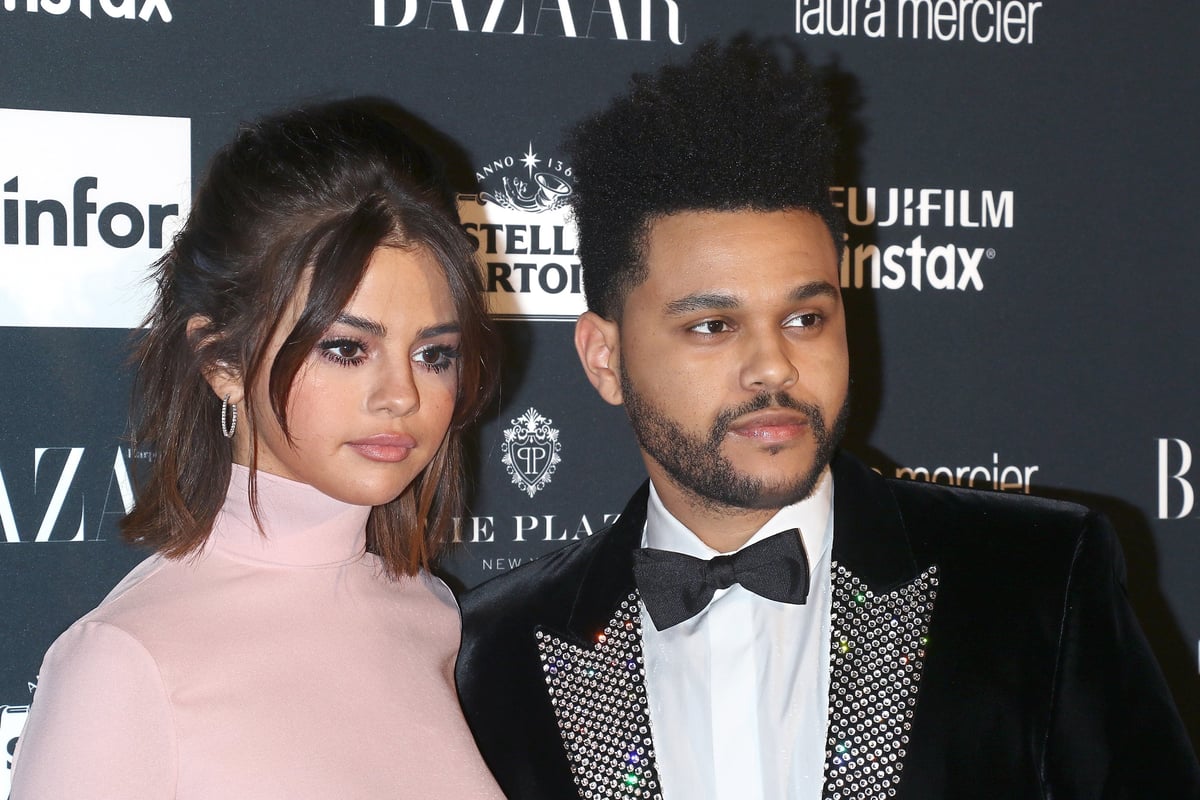 Selena Gomez and The Weeknd in 2017. Image: Getty.

After The Weeknd and Gomez split, the singer was spotted in New York City with Hadid.

The couple officially started dating again in April 2018, before separating in August 2019.

Since their split, The Weeknd hasn't publicly dated anyone else.

Although he was rumoured to be dating singer Rosalia at the end of 2020, the pair never addressed the speculation.

As for Hadid, the model recently confirmed her relationship with art director Marc Kalman, sharing a photo alongside him on a trip to France.

Who has Angelina Jolie dated before?

Over the course of her career, Angelina Jolie has had several high-profile relationships.

In 1995, Jolie began dating British actor Jonny Lee Miller. They later eloped in 1996, before divorcing on good terms in 1999.

Since their relationship ended, Jolie and Miller have remained friends. In fact, Jolie was even seen visiting Miller at his New York City apartment in June. 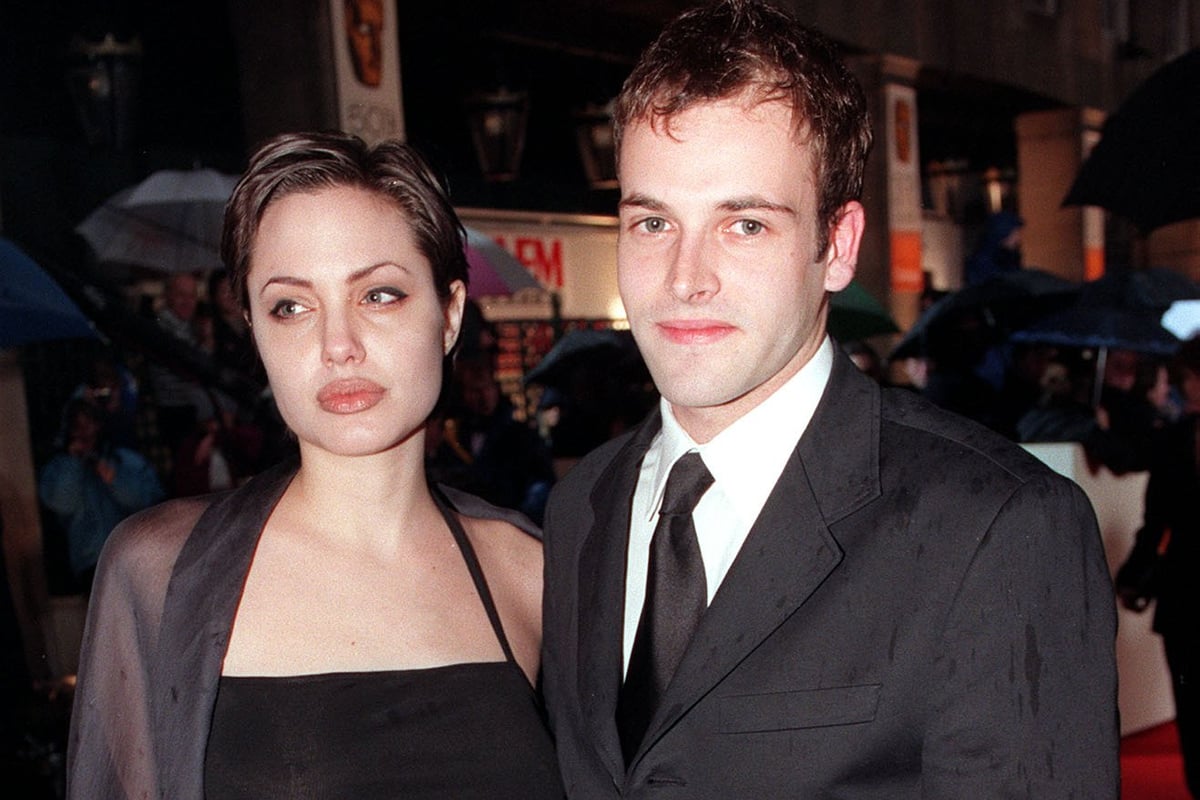 The couple had a speedy two-month relationship, before marrying in Las Vegas.

When they got married, Thornton was still engaged to actor Laura Dern.

"[I] left our home to work on a movie, and while I was away, my boyfriend got married, and I’ve never heard from him again," Dern reportedly said.

The couple later separated in 2003. When asked about their split, Jolie told Vogue: "It took me by surprise, too, because overnight, we totally changed. I think one day we had just nothing in common." 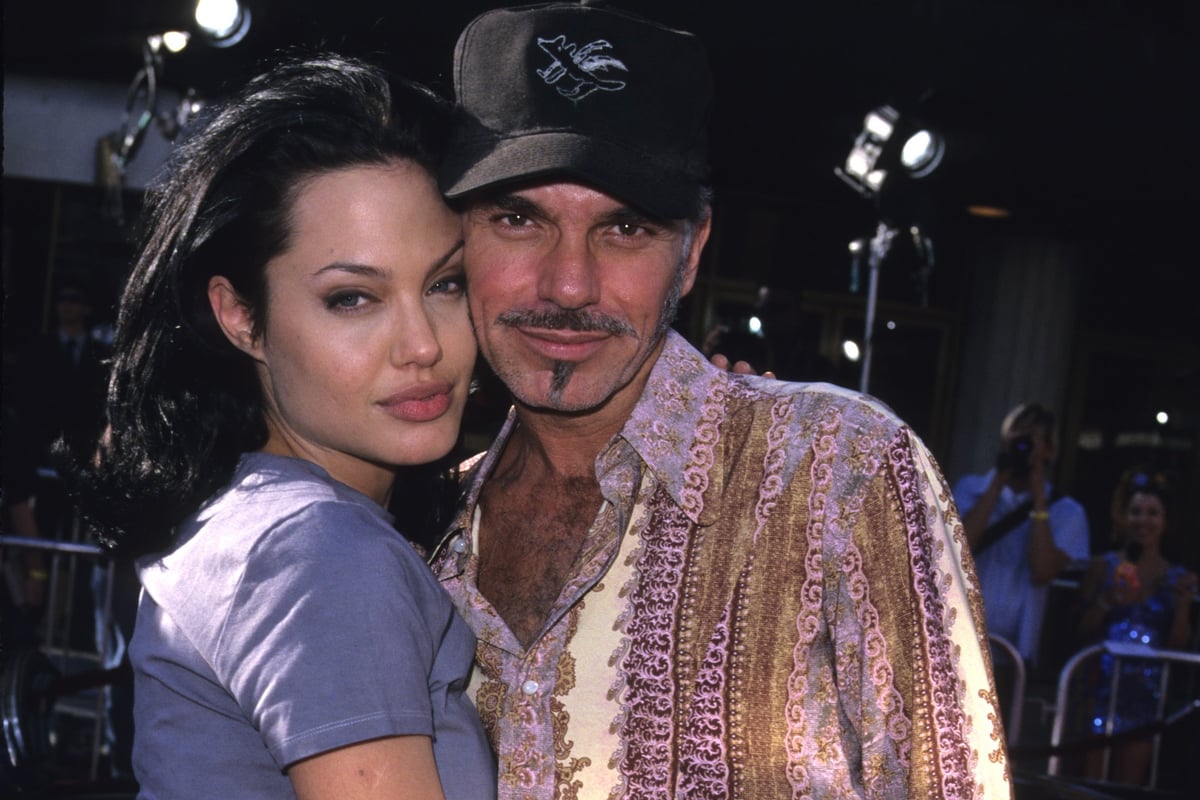 The pair first met on the set of Mr and Mrs Smith in 2004. At the time, Pitt, now 57, was married to his wife of four years, Jennifer Aniston, while Jolie was a single mum to her first adopted child Maddox.

Although the pair didn't announce it until much later on, it was during filming that the pair fell in love.

In January 2005, after five years of marriage, Pitt and Aniston announced their separation.

It wasn't until 2014 that Pitt and Jolie got married in France with their six children in attendance.

However, after just over two years of marriage, Jolie filed for divorce on September 20, 2016, citing "irreconcilable differences". She asked for full custody of their six children. 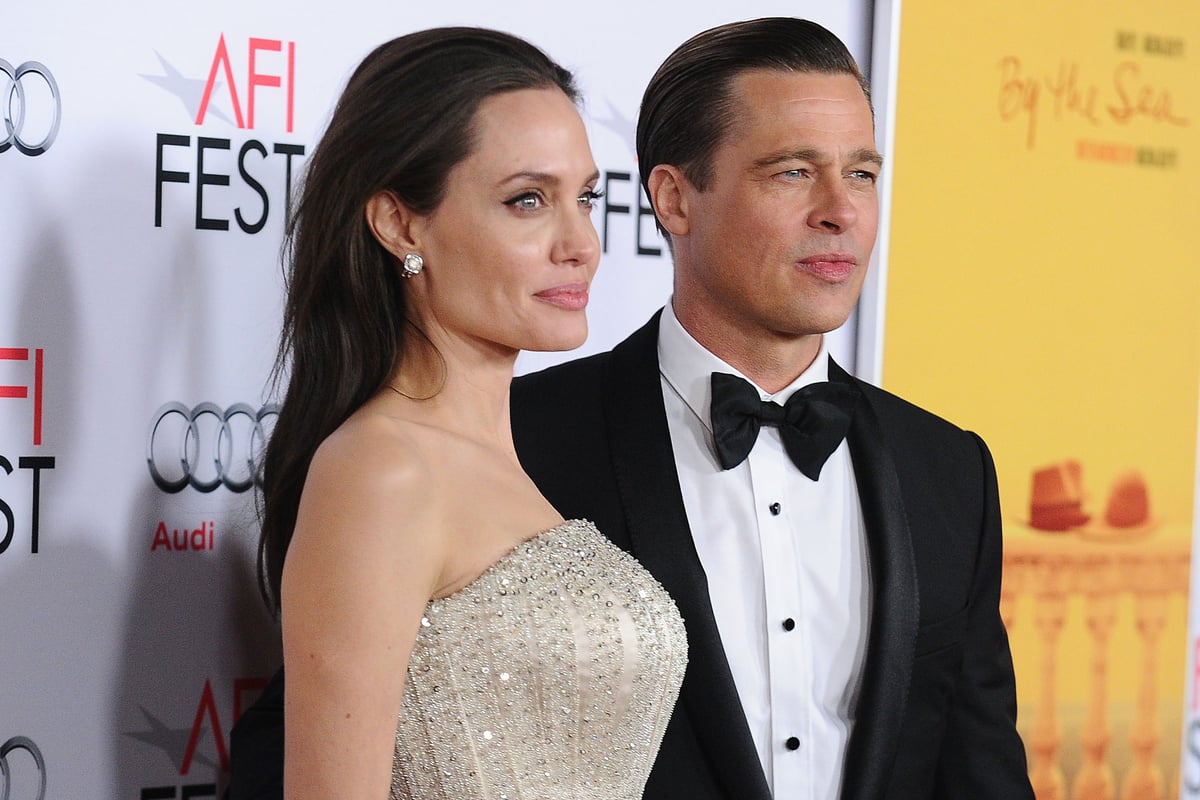 Days later, news broke out that an altercation that took place during a flight from Nice, France to Los Angeles ultimately sparked the reason for the divorce; where Pitt was drinking heavily and allegedly physically hurt their son, Maddox.

But after the Los Angeles Department of Children and Family Services and FBI investigated the case, they cleared him.

The couple's divorce was later finalised in 2019.

According to Us Weekly, the documents state that Jolie and their children are willing to offer "proof and authority in support" of these allegations against Pitt. The actress also agreed to provide testimony, along with the "testimony of minor children".