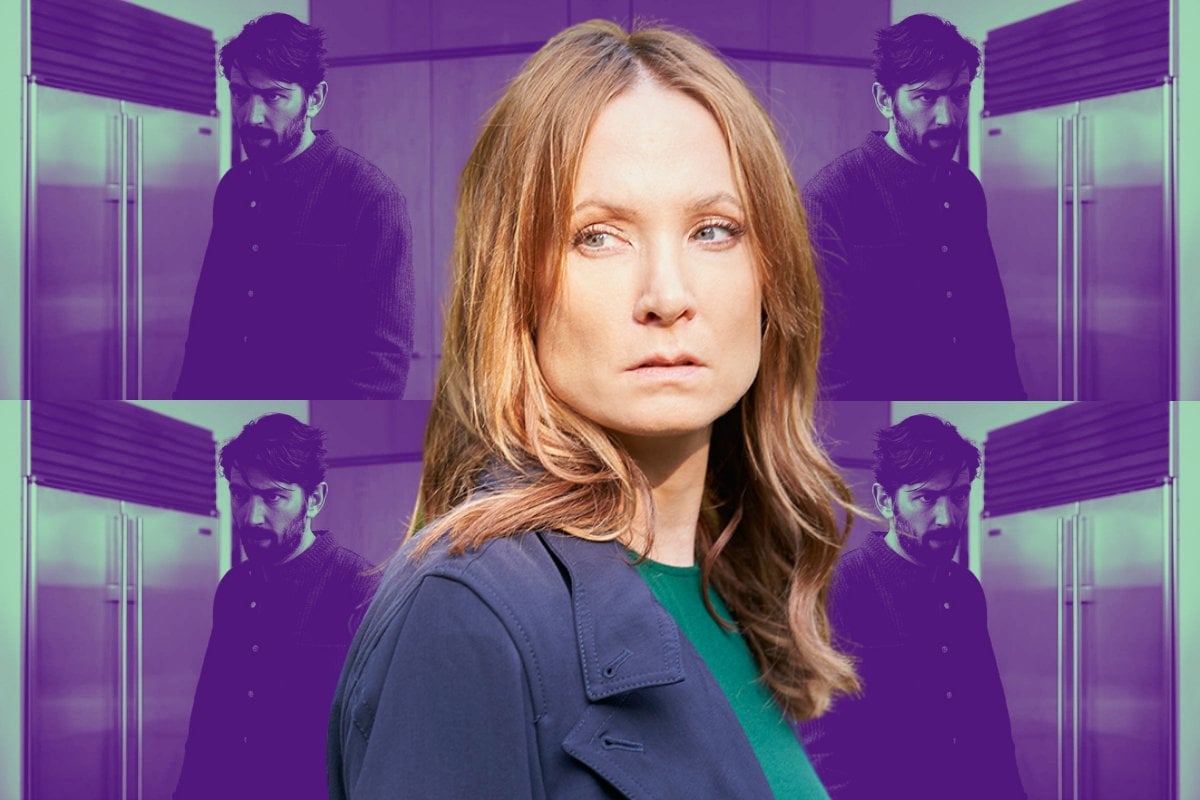 In the opening scene of Stan's Angela Black, we meet a seemingly perfect middle class couple.

Angela (Joanne Froggatt) and her husband, Olivier (Michiel Huisman), are entertaining another couple in their sprawling, modern English home.

The dinner party is coming to a close when Angela accidentally lets slip that Olivier was golfing when he was supposed to be somewhere else.

A simple error. A slip of the tongue.

But it becomes immediately clear that Olivier doesn't see it that way.

Tension builds and a few scenes later, Angela's bloodied tooth is lying on the kitchen floor.

Watch the trailer for Stan's Angela Black. Post continues below.

Below I unpack what Angela Black is about and give my verdict on whether you should watch it:

What is Angela Black about?

Angela Black is a British thriller that explores the truth lying below the surface of a seemingly idyllic marriage.

It's both an exploration of domestic abuse and coercive control, and a thriller that includes escalating tension, a murder plot and a car chase.

The six-part Stan series follows the story of Angela, a wife and mum of two boys, who can't escape her marriage to her controlling, abusive husband, Olivier.

In the first part of the pilot episode, we see Olivier has physically abused Angela. We soon learn it's not the first time. And soon other signs of coercive control and domestic abuse emerge.

The story goes to a whole new level when we're introduced to Ed Harrison (Samuel Adewunmi), a private investigator Olivier has hired to dig up dirt on Angela.

The extraordinary performance by Joanne Froggatt. Froggatt gives a masterclass on what it's like to be a victim/survivor of domestic abuse. In some scenes she's determined to escape, in others, we see her being worn down by Olivier's manipulation skills and gaslighting techniques. In other scenes, she seems totally exhausted, worn out by carrying the burden and secret of her husband's abuse.

The twists and turns. What happens in episode one is just the tip of the iceberg of Angela and Olivier's relationship and the lengths Olivier will go to get what he wants.

Maid for the portrayal of a wife and mother trying to leave an abusive relationship.

Doctor Foster for the thriller element and the exploration of what's below the surface of a seemingly perfect marriage.

And Liar for the plot twists and the he said/she said narrative.

There are six episodes. The first episode is streaming on Stan now, and new episodes are dropping weekly.

Many people will come to Angela Black for the thriller element. It has all the ingredients of a bloody good British thriller, the kind you can binge in one afternoon.

But most people, after watching the six-episode series, will leave with a better understanding of coercive control, domestic violence and what it's really like to be in that situation.

With a compelling plot, and an outstanding performance by Froggatt, Angela Black is a must-watch for anyone who wants to understand the stories behind the headlines.

The first episode of Angela Black is streaming exclusively on Stan now. And new episodes are dropping weekly.