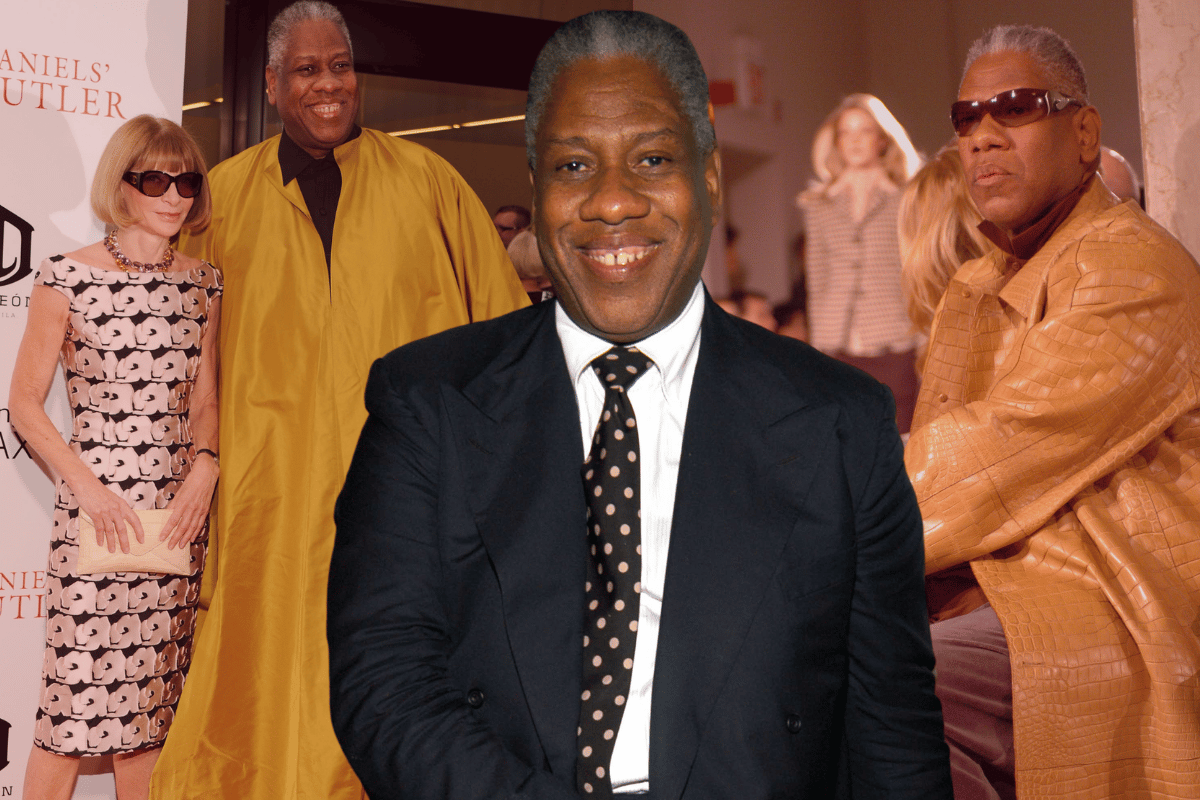 And at six feet six inches tall with countless iconic outfit moments over the years, Talley was a powerful and influential figure wherever he went, often side-by-side with Anna Wintour.

To pay tribute to Talley, we take a look back at his life, including his childhood, his rise to the top of the fashion industry's elite - the drama that came with that - and finally the legacy he leaves behind.

Talley was born in 1948 and raised by his grandmother Bennie in Durham, North Carolina.

"Bennie Frances Davis may have looked like a typical African American domestic worker to many of the people who saw her on an ordinary day, but I, who could see her soul, could also see her secret: that even while she wore a hairnet and work clothes to scrub toilets and floors, she wore an invisible diadem," he wrote in his 2003 memoir.

"My mother figure to this day is my grandmother. She gave me unconditional love and her home, her values, were my arc of safety," Talley told The Guardian in 2020.

Sadly throughout his childhood, Talley experienced bullying and sexual abuse. The first abuser was a man who lived on their street. Later, there were older brothers of friends.

"It began when I was nine years of age, and it was serial. My whole life has been determined by this trauma. I can say this now. I don’t know how to be intimate and in a relationship, and I regret that. It comes from this childhood trauma."

For Talley, reading fashion magazines was a form of escapism amid the violence.

"I was allowed to retreat from the bullying and the sexual abuse into a beautiful world," he shared.

How André Leon Talley got his start in fashion.

Talley worked assorted jobs before arriving in New York in the 1970s. He received a scholarship to study at the prestigious Brown University and received a master's in French Literature.

As a young adult, he worked as a park ranger in Washington, D.C. and Maryland, where he told visitors about slaves who built Fort Washington and dressed up like a Civil War soldier.

But it was the fashion realm where Talley wanted to work the most.

Talley's relationship with Vogue started at Duke University, where his grandmother cleaned dorm rooms. In his youth, Talley would walk to campus to read the magazine in the library.

He soon met renowned fashion editor Diana Vreeland, the pair striking up a friendship that lasted until her death in 1989. During her life, she had worked for Harper's Bazaar and as editor-in-chief at Vogue, later becoming a special consultant to the Costume Institute of the Metropolitan Museum of Art. Her influence was therefore instrumental to Talley's career.

After stints with Interview Magazine and Women's Wear Daily, Talley was hired at Vogue in 1983 by editor-in-chief Anna Wintour.

Then in 1988, he was appointed creative director.

Of course Talley's tenure at Vogue was one of his biggest career triumphs, making the masthead what it is today.

After holding the position of creative director for seven years, he became Vogue's editor-at-large, a position that he held until 2013. He then continued working with Vogue until 2018. Along with editing, Talley was also a fashion journalist, his contributions featured in Women's Wear Daily, W Magazine and the New York Times.

Talley was also a familiar figure to television audiences, serving as a judge on America's Next Top Model and appearances on Sex and the City and Empire.

Not to mention his countless famous friends and work colleagues, often photographed together front row at fashion shows in New York and throughout Europe. 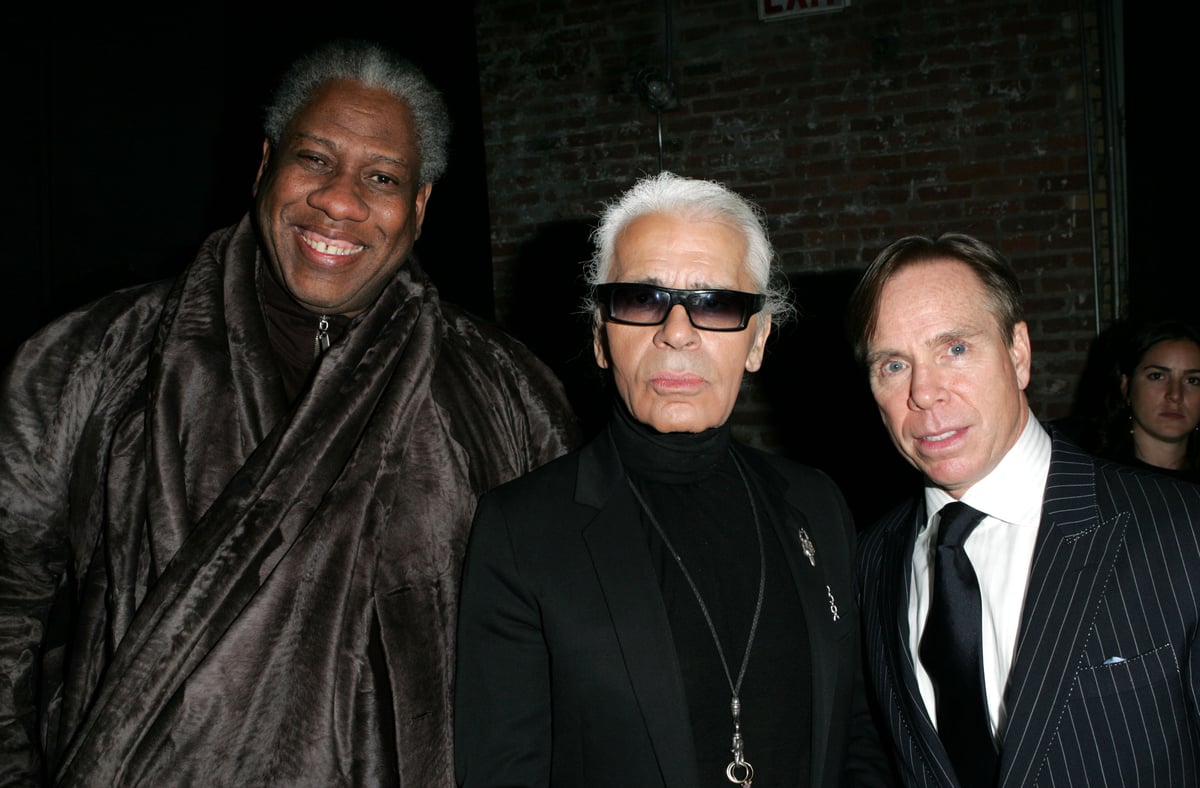 Andre Leon Talley with Karl Lagerfeld and Tommy Hilfiger. Image: Getty. Ultimately, Vanity Fair summed it up best in 2013 in a spread titled The Eyeful Tower where they described Talley as "perhaps the industry's most important link to the past", which recognised his influence in shaping fashion into what it is today.

As Designer Tom Ford said, Talley was "one of the last great fashion editors who had an incredible sense of fashion history. He can see through everything you do to the original reference, predict what was on your inspiration board".

Andre Leon Talley on "being a Black man in the white world of fashion".

In his 2020 memoir, The Chiffon Trenches, Talley reflected on his experiences of racism.

In the '70s, one fashion PR had referred to him as "Queen Kong". Another terrible instance was when a colleague accused him of being what he described as "a black buck".

But when it came to his work, Talley said he didn't think about being a Black man in the white world of fashion. He told The Guardian in 2020, "I earned my position not because I was beautiful, skinny, but because I had done my homework and my degrees. I never thought about being a man of colour in my career until recently."

In his book he wrote: "For the most part I barely noticed it and only now, looking back, do I realise the blinders I had to keep on in order to survive."

With a greater appreciation for his culture and history in his later age, Talley said at the time: "I'm a descendant of enslaved people, and this is always in my mind. Whatever I articulate must in some way reflect who I am and what I can impart to the history of fashion, as this Black person who was able to be in the front row." 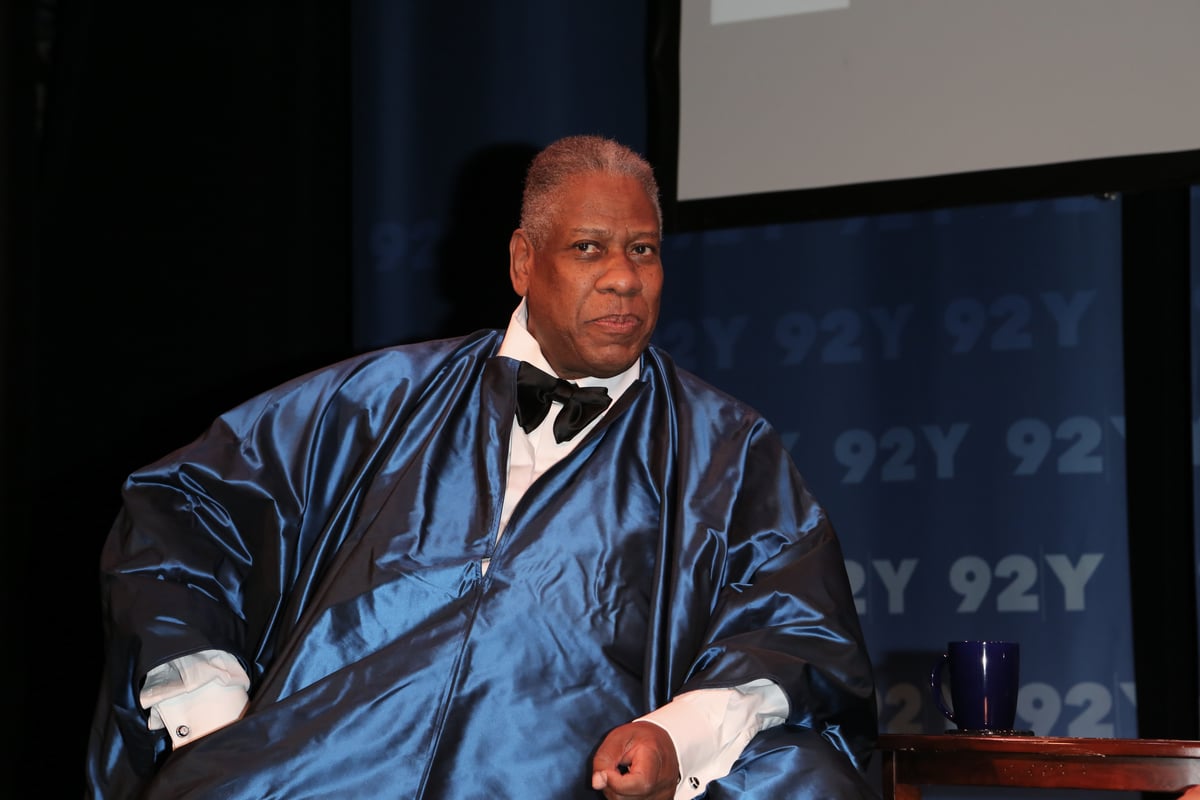 Image: Getty. Talley was also instrumental in pushing for more Black models to appear both in the magazine and on the runway of fashion shows.

He also styled Michelle Obama and attended Barack Obama’s inauguration with designer Diane von Furstenberg in 2009, becoming a regular stylist for the Obamas during some of Barack's presidency.

Talley also endured and played a key role in the first Vogue cover ever photographed by a black photographer, the 2018 shoot with Beyoncé by photographer Tyler Mitchell.

The strained relationship between Andre Leon Talley and Anna Wintour.

In his memoir, however, Talley made it clear the pair were no longer friends.

Talley and Wintour fell out in 2018, after he discovered he was no longer doing the red carpet interviews at the annual Met Gala, or those for Vogue's podcast.

Reflecting on the falling out, Talley told The Guardian: "I had suddenly become too old, too overweight and too uncool. It felt like I was just thrown under the bus. It hurt!" 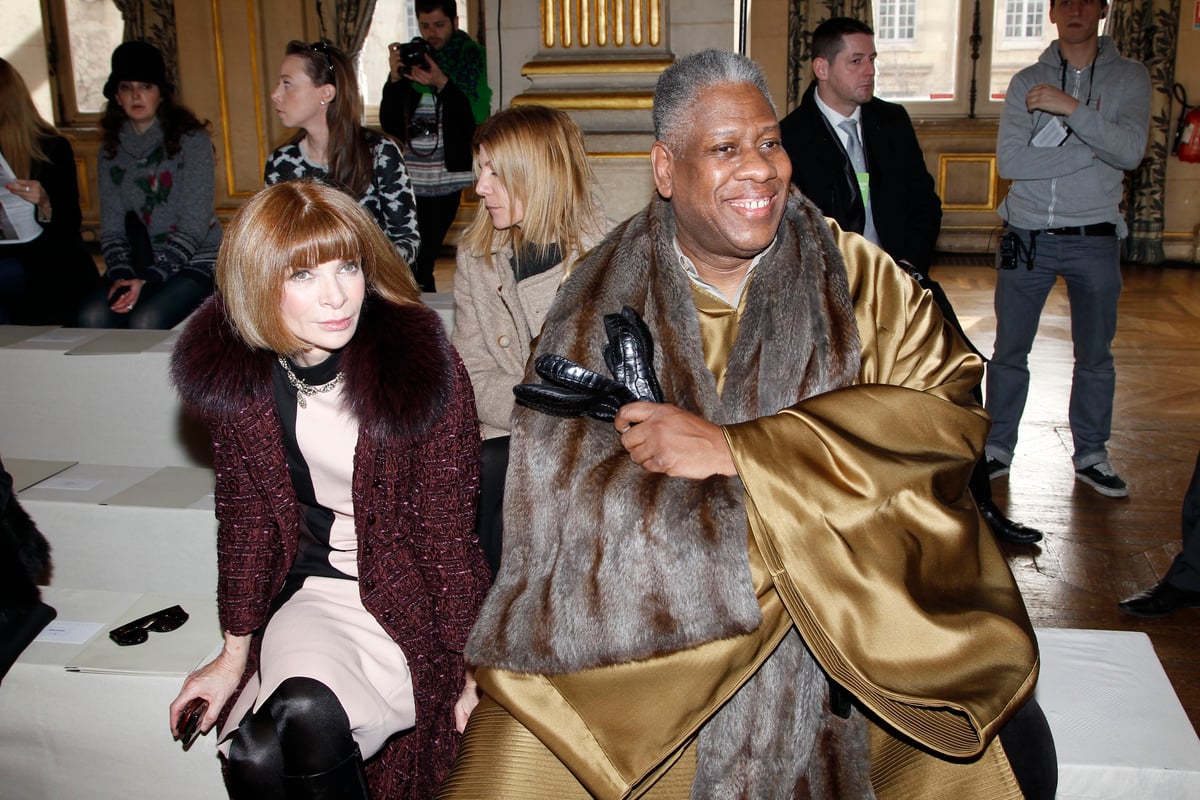 Image: Getty. In his 2020 memoir, Talley wrote: "I owe to Anna the pioneering role that I had of a creative director of Vogue. I was the first Black man to ever be named such. I owe that to Anna Wintour. And I think, in turn, I think she owes me."

He also went on to write that Wintour had left him with "huge emotional and psychological scars," suggesting the editor-in-chief was "immune to anyone other than the powerful and famous people who populate the pages of Vogue."

"One day she treats me like a good friend and a colleague, and the next day, she treats me as if she had just handed over her keys to an unknown parking valet," he said, quoted in Talley's memoir. 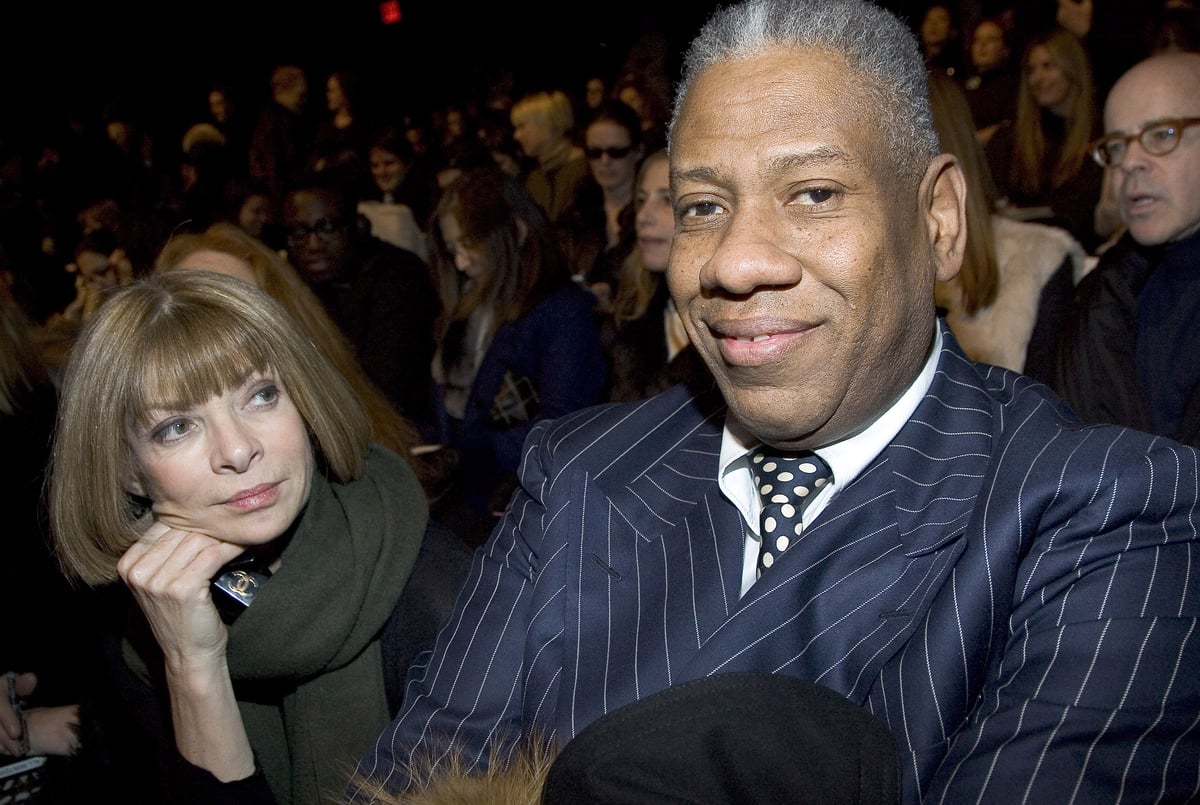 This week, tributes to Talley have poured in following his death at the age of 73.

As Talley once said himself: "My story is a fairytale of excess, and in every fairytale there is evil and darkness, but you overcome it with light."

In the wake of his death, Tyra Banks said: "I adored Andre. Before meeting him, I had never experienced such a prolific person serving up a rare mix of fashion 'fabulousness' and real down-home Southern comfort love. Being in his presence was so magical."

Designer and close friend Diane von Furstenberg also shared a touching tribute. "Goodbye darling Andre ... no one saw the world in a more glamorous way than you did. No one was grander and more soulful than you were."

British Vogue editor-in-chief Edward Enninful also thanked Talley for being a pioneer in the fashion industry.

RIP André Leon Talley. He was a force in fashion, a legendary storyteller, and a friend to our show. The world has lost yet another icon. pic.twitter.com/NyVqpAC8Vz

I’m sorry to say the extraordinary #AndreLeonTalley has died. He was such a force, & believed in the magic of Fashion & its illusions with all his being. His life was a saga of great highs, great lows, the dramatic, the ridiculous, and the endless pursuit of beauty. Love & RIP.

I am sad to hear of Andre Leon Talley’s passing. My thoughts and prayers are with his loved ones.

Reply
Upvote
A true gentleman in every sense. Andre’s book was such a wonderful read – I learned so much. You don’t need to know much about the fashion industry to find this such a compelling read. His relationship with Karl Largerfield, and Karl’s ghosting of Andre was very sad, as too was reading about the sexual abuse Andre experienced in his youth. Andre’s story of Naomi Campbell being in a foul mood on a private jet because she’d had a croissant for breakfast gave me a big belly laugh. Interestingly, Andre never mentions his stint on America’s Top Model or Tyra Banks, not even in passing. That alone speaks volumes! You will be missed, Sir, rest in peace.
News
General
Opinion
True Crime
Politics
Sport
Explainer
Entertainment
Celebrity
Reality TV
Movies
TV
Books
Rogue
Royal
Lifestyle
Beauty
Fashion
Weddings
Home
Wellness
Health
Fitness
Travel
Food
Parents
Before The Bump
Pregnancy
Baby
Kids
Teens
School
Parent Opinion
Work & Money
Money
Finance
Career
Lady Startup
Relationships
Sex
Dating
Separation
Friendship
Family
Real Life
Couples