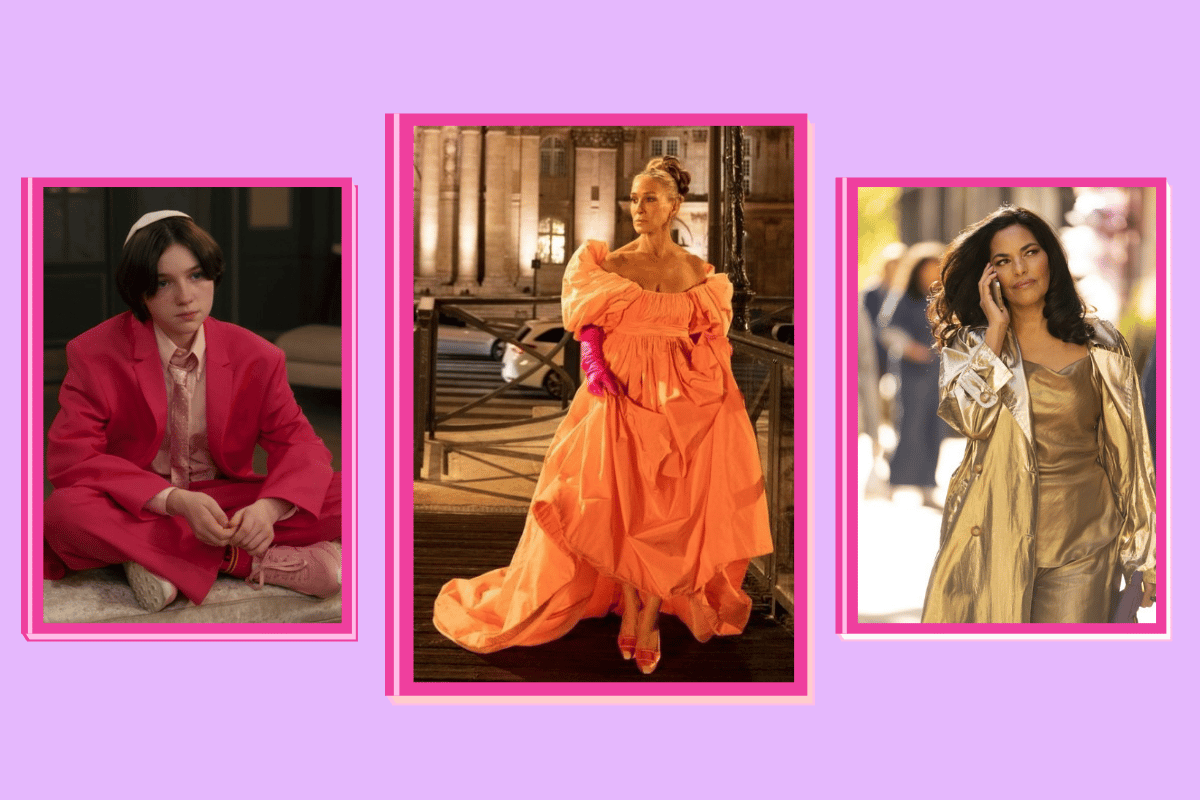 And just like that, three of our favourite New Yorkers have said goodbye (for now) after 10 incredible episodes.

On Thursday night, streaming service Binge dropped the final episode of the much-awaited Sex and the City reboot, And Just Like That, bringing Carrie Bradshaw, Miranda Hobbes and Charlotte York - played by Sarah Jessica Parker, Cynthia Nixon and Kristin Davis, respectively - back into our lives for one last time.

The trio, along with a mix of new and returning characters, caught up with fans and showed us how they were navigating family, friendship, and love in their 50s (without Samantha of course - but you can read all about that here).

Much like the original series, fashion played a major role in the reboot. And we need to talk about it immediately.

Let's take a look back at some of And Just Like That's stand out fashion moments.

And Just Like That was the rollercoaster that threw plot twists left, right and centre. However, one thing remained unchanging since the inception of Sex And The City, and that was the dedication to peculiar, spectacular and outrageous fashion.

Yes, And Just Like That gave us everything we needed and more after 10 years apart from our favourite New Yorkers.

After Che announced their departure from New York to film a pilot in Los Angeles, Jackie and Carrie walked alongside eachother in united unemployment. For the special moment, Carrie dressed in a vintage London fog raincoat, Isabel Marant pumps and a studded Sonia Rykiel purse. 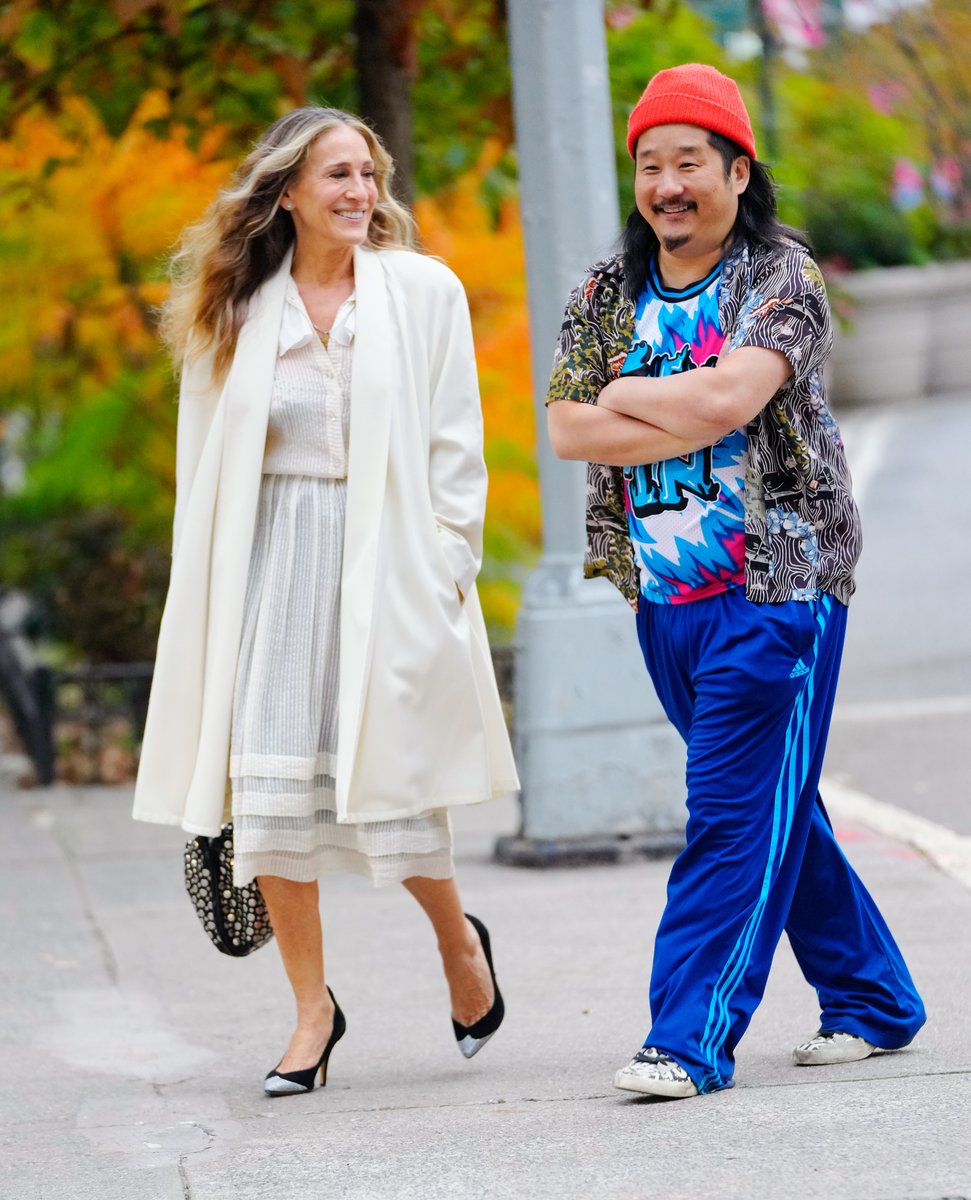 Carrie and Jackie in And Just Like That. Image: Getty.

Rock broke their mother's heart when they refused to partake in their "they mitzvah", but thankfully they shattered Charlotte's world while looking fantastic.

Dressed in a pink suit, we think they nailed the androgynous theme perfectly. 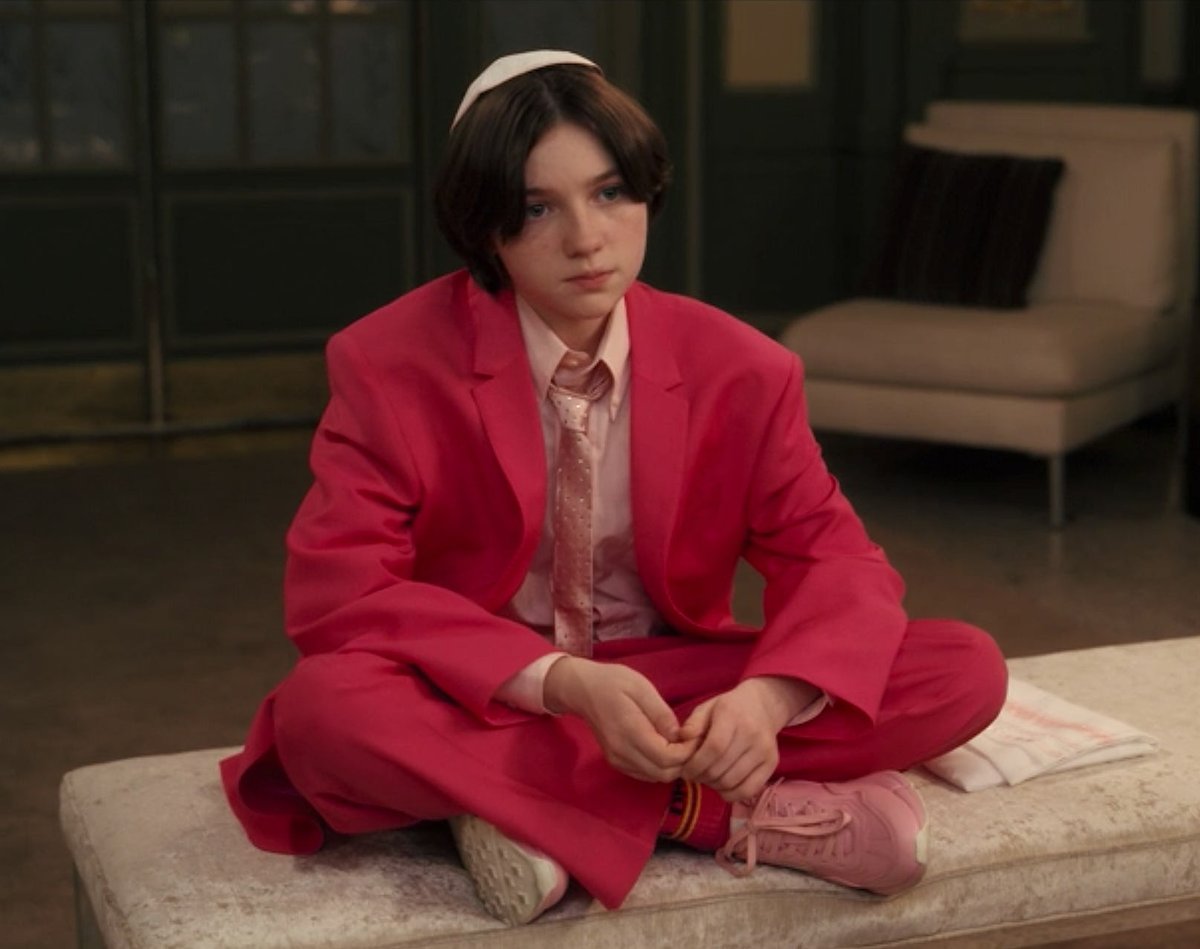 Rock in And Just Like That. Image: HBO Max.

New character Seema didn't disappoint this season, she showed glamour, a unique colour palette and one killer look after another.

Her most notable ensemble during the finale was her head-to-toe shimmering gold blazer and matching dress. 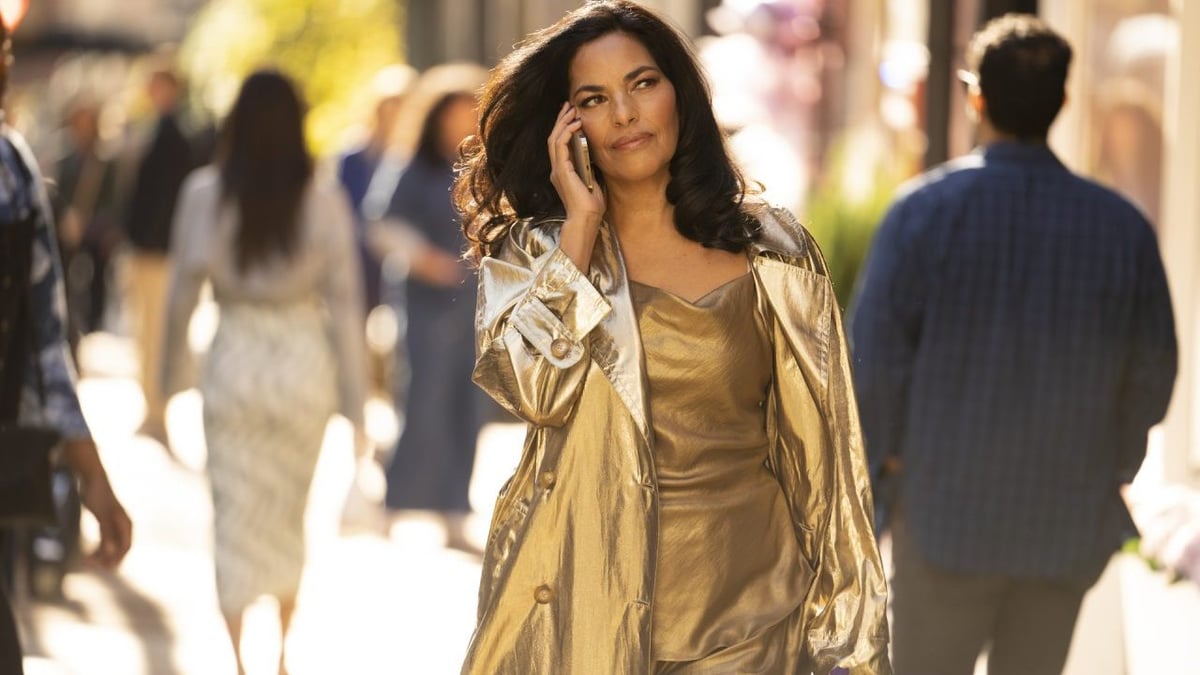 Seema in And Just Like That. Image: HBO Max.

We'd be silly not to mention that finale dress Carrie donned to scatter Big's ashes in Paris.

The star of the show clearly found solace in couture as she wore a voluminous orange Valentino gown and leather hot pink opera gloves (which caused a spike in google search traffic by 273 per cent as it seems everyone was keen to have a pair of "pink gloves" for themselves, as reported by WWD). 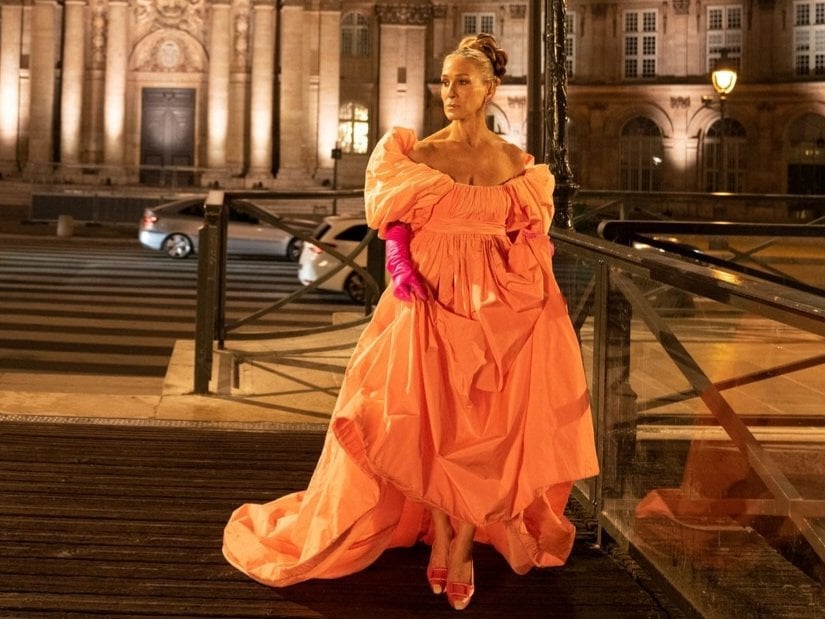 Sarah Jessica Parker on And Just Like That. Image: HBO Max.

It was a beautiful way to say goodbye.

Within minutes of the first episode, it was obvious that Rogers and Santiago stayed true to the main characters' style but updated it for the time.

Her debut look in the first episode featured a black floral jacket, neutral jumpsuit, multi-coloured heels and a feathered hat. In typical Carrie style, it didn't make a whole lot of sense - but we wouldn't have it any other way.

To complete the look, she wore not one but two handbags. 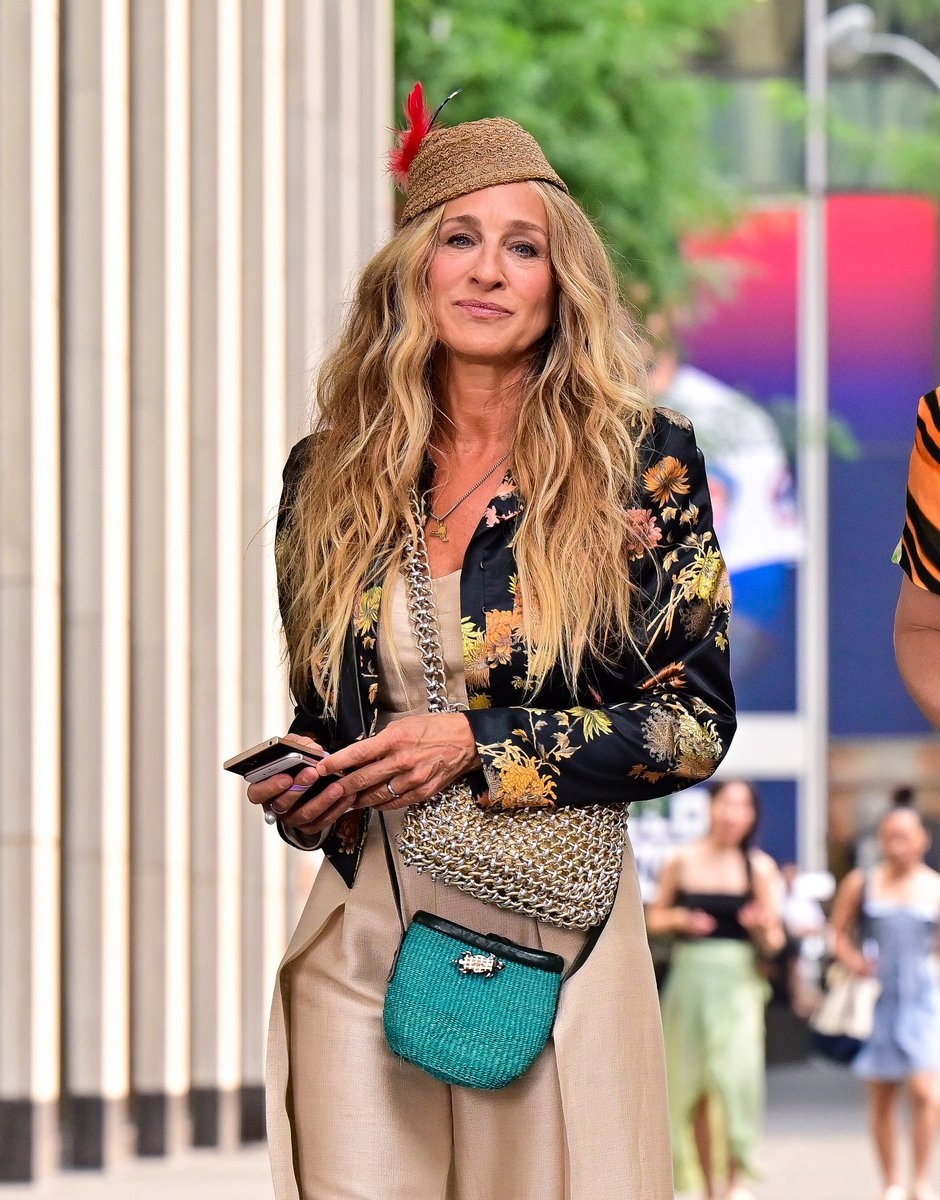 From the get-go, the show acknowledged the pandemic with the characters talking about social distancing.

Further along in the first episode, Carrie wore a teal blazer, lime green trackpants and layered necklaces, finishing off the look with sparkly silver gloves to protect her hands in public spaces. So far, so Carrie. 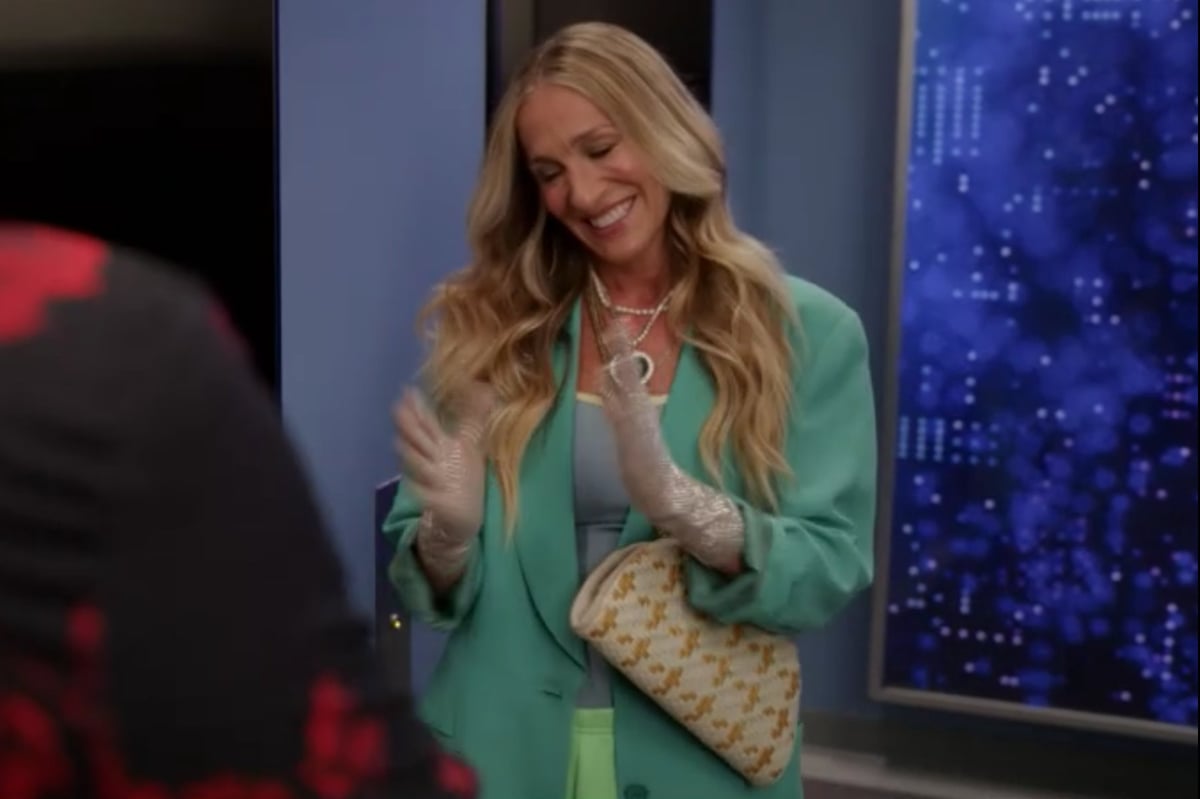 There were also nods to her most iconic fashion moments from the original series and movies.

For Charlotte's daughter Lily's piano recital, Carrie brought out her Chanel flower brooch from season three of Sex and the City and her wedding shoes from first Sex and the City movie. Yep, those blue satin Manolo Blahnik pumps. 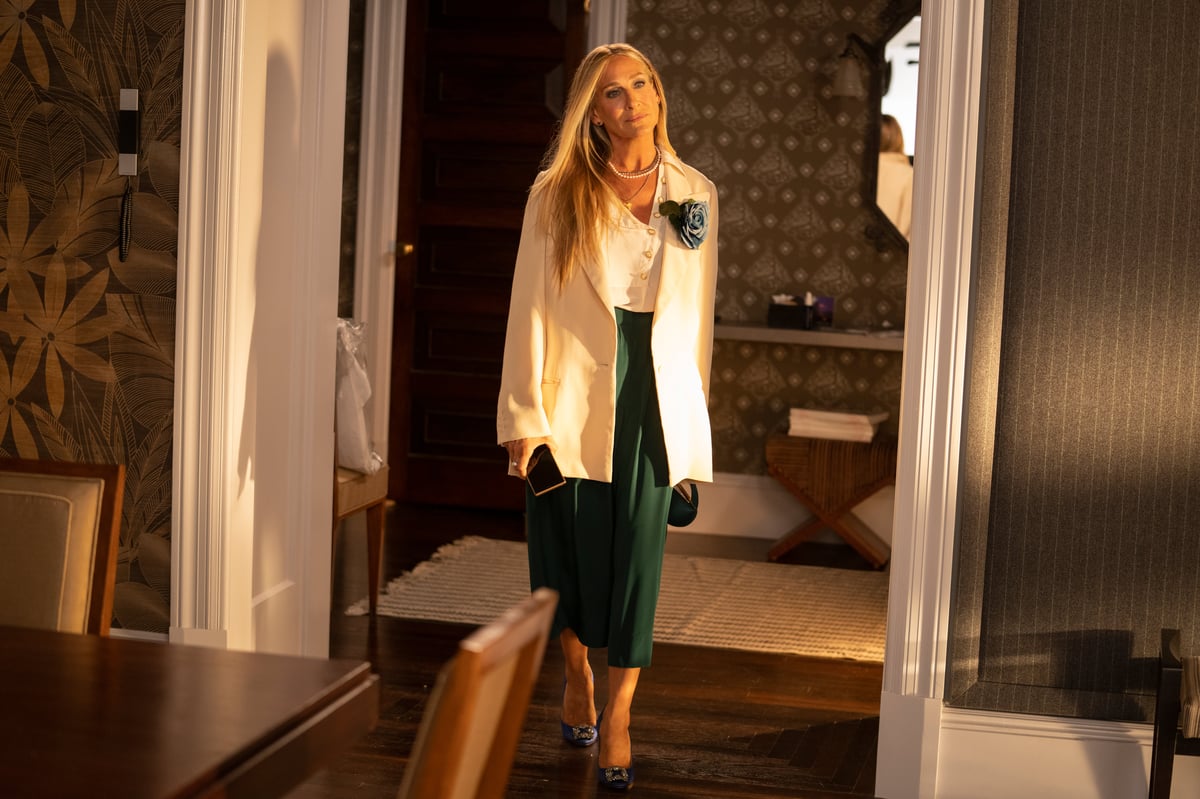 And in the second episode, for the funeral of Big, she brought back another headpiece and tulle skirt.

It was classic Carrie with a sombre twist. 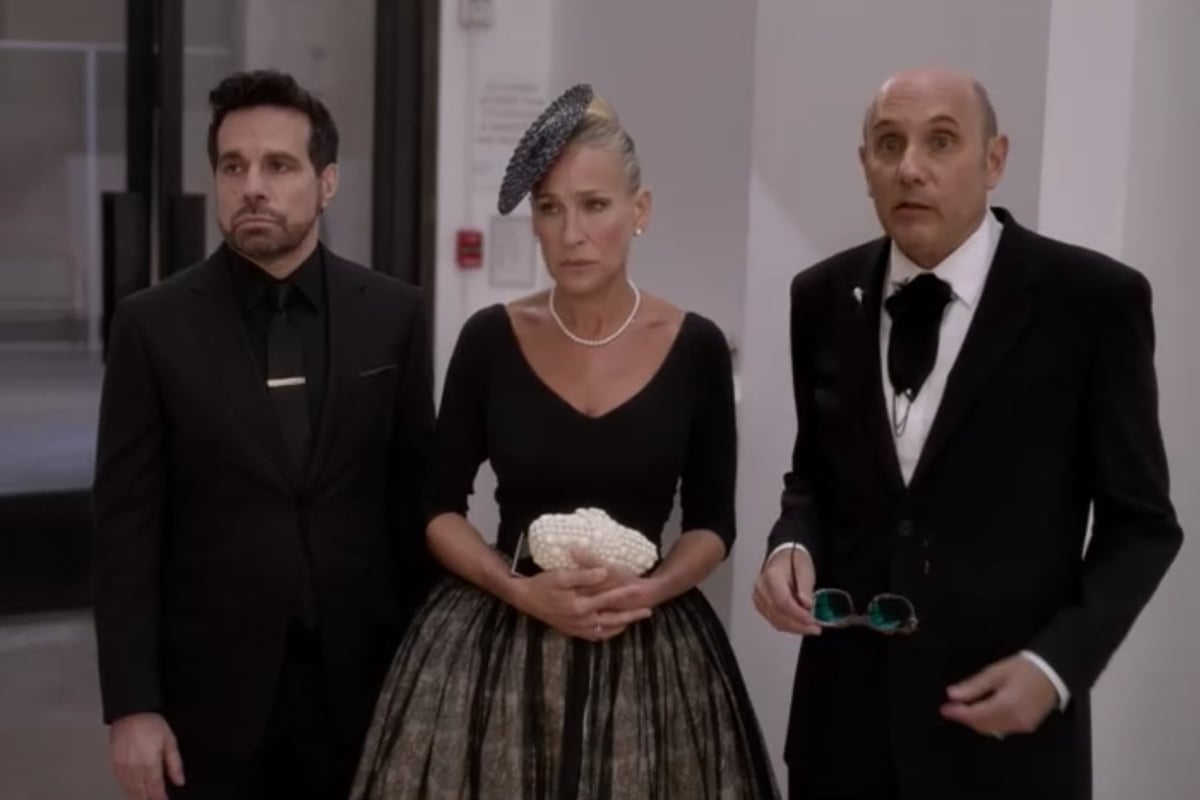 Charlotte's style in the reboot follows the conservative and classy aesthetic she was known for in the original series. 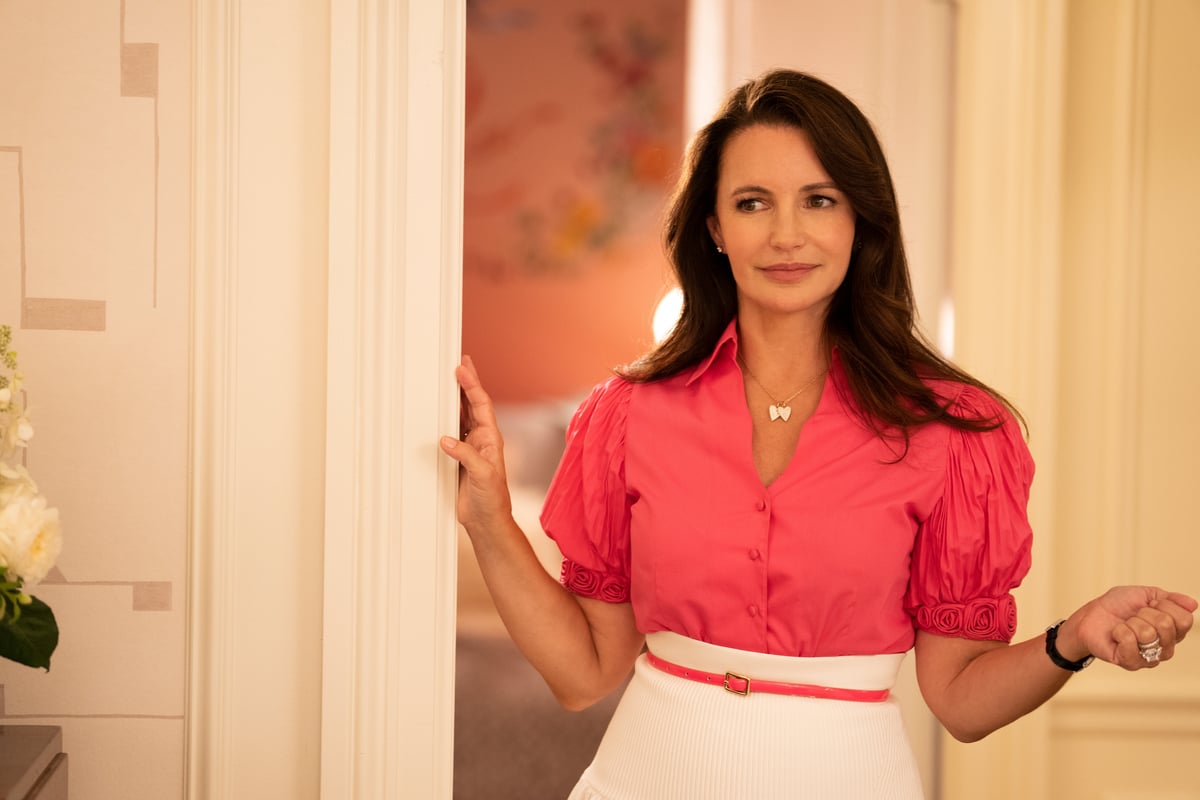 Image: HBO/Binge. Out of the three main characters, Miranda's style takes the biggest departure from her wardrobe in the original series. This time, she ditched her usual power suiting for a more relaxed vibe - and we're here for it.

For her return to university to receive her Masters, Miranda had a thing for bright, patterned dresses and bold shirts. She also forwent her red hair and embraced her greys in the reboot. 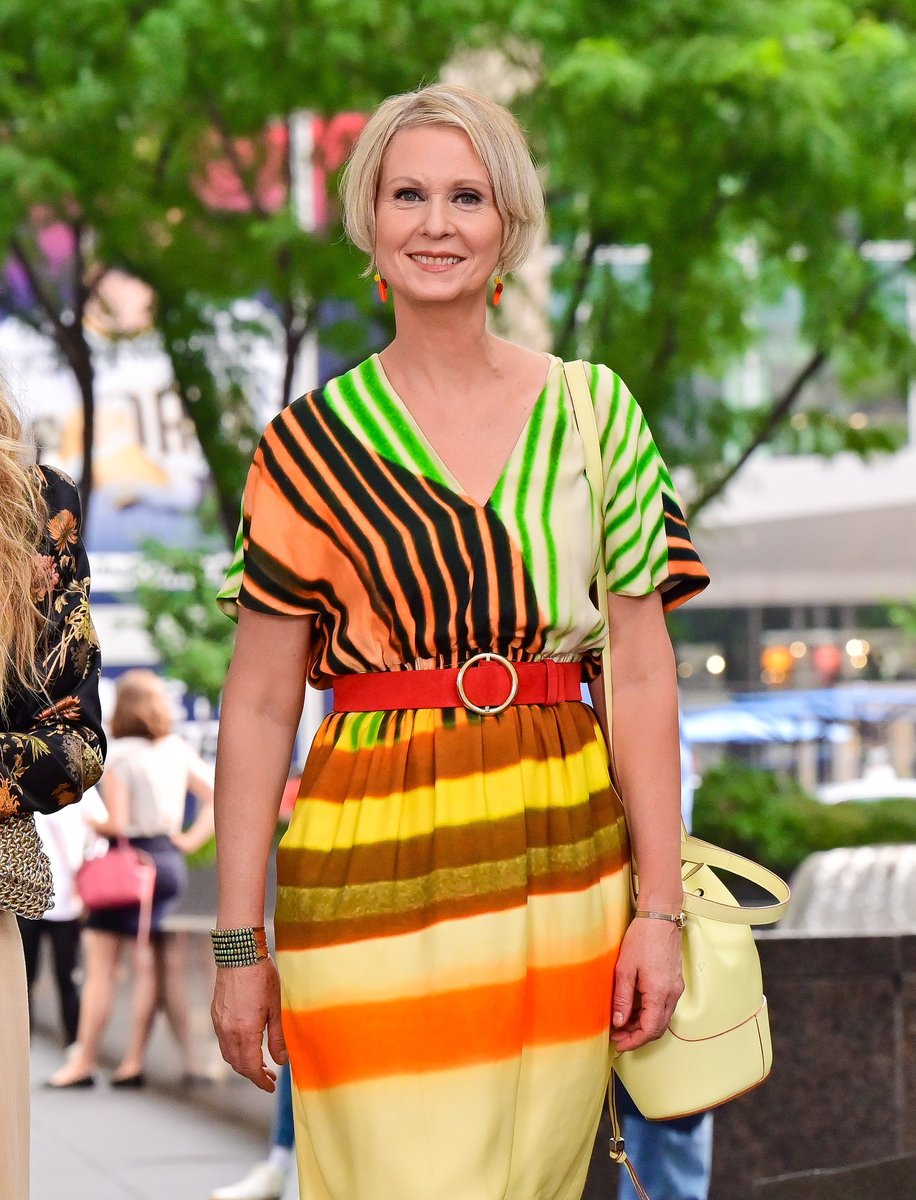 Image: Getty. The late actor Willie Garson, who played fan-favorite character Stanford Blatch, brought colour-blocking to And Just Like That.

His first outfit was a periwinkle blue suit and matching patterned shirt.

In the second episode, he wore a colourful tie-dyed shirt and yellow pants. 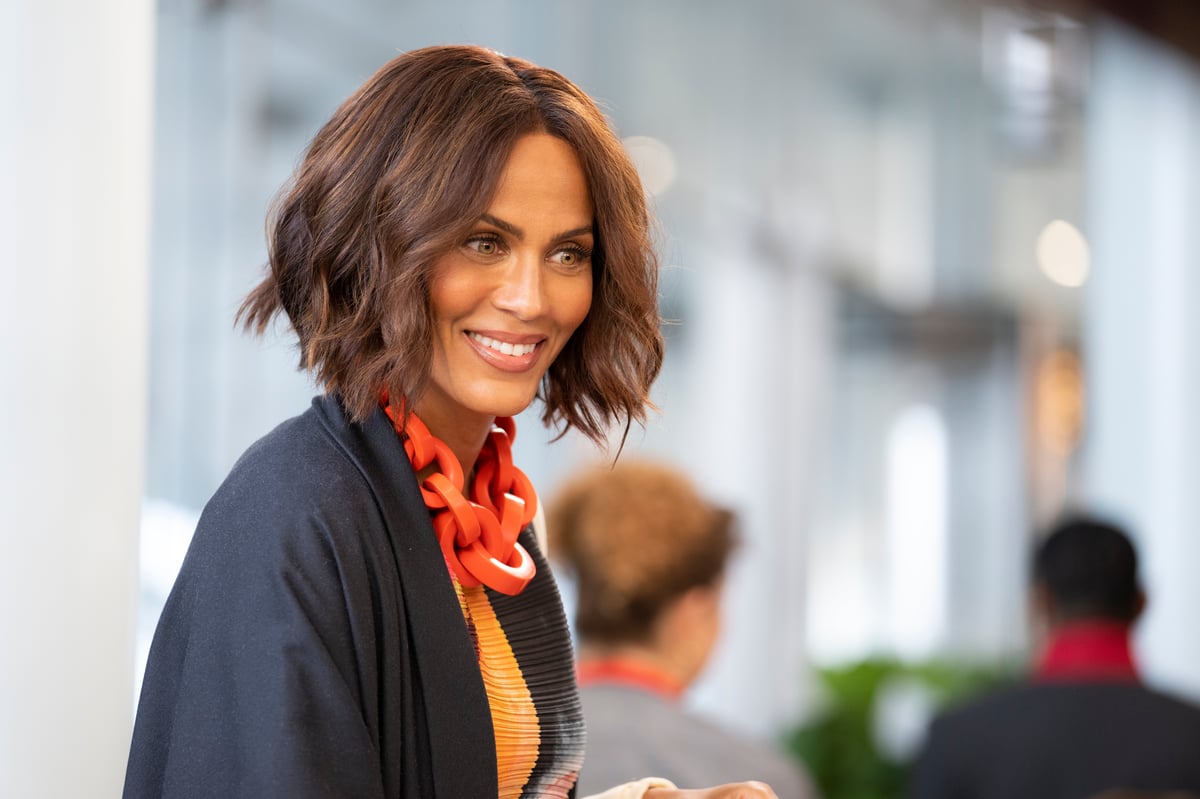 When Miranda admitted to Charlotte she was having an affair, she broke the solemn news in style. Wearing an Altuzarra wrap-waist, Mckenna shirt along with the Akris windowpane check midi skirt, she showed us the magic of a monochrome moment. She paired the look with some Gianvito Rossi block-heel suede combat boots and a leather flat bag by Gerard Darel. 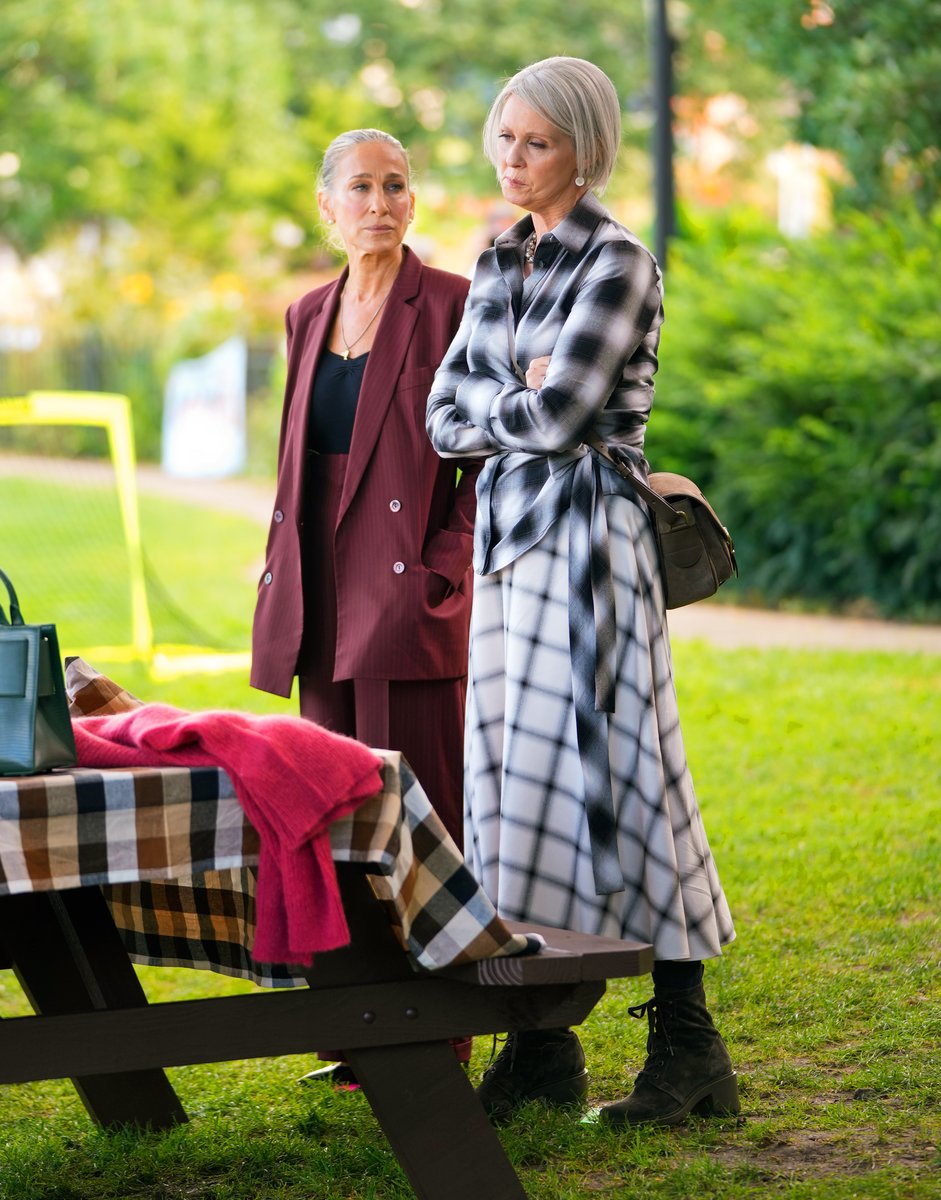 Who could forget Charlotte's matching moment with her two children in gorgeous Oscar de la Renta get ups. 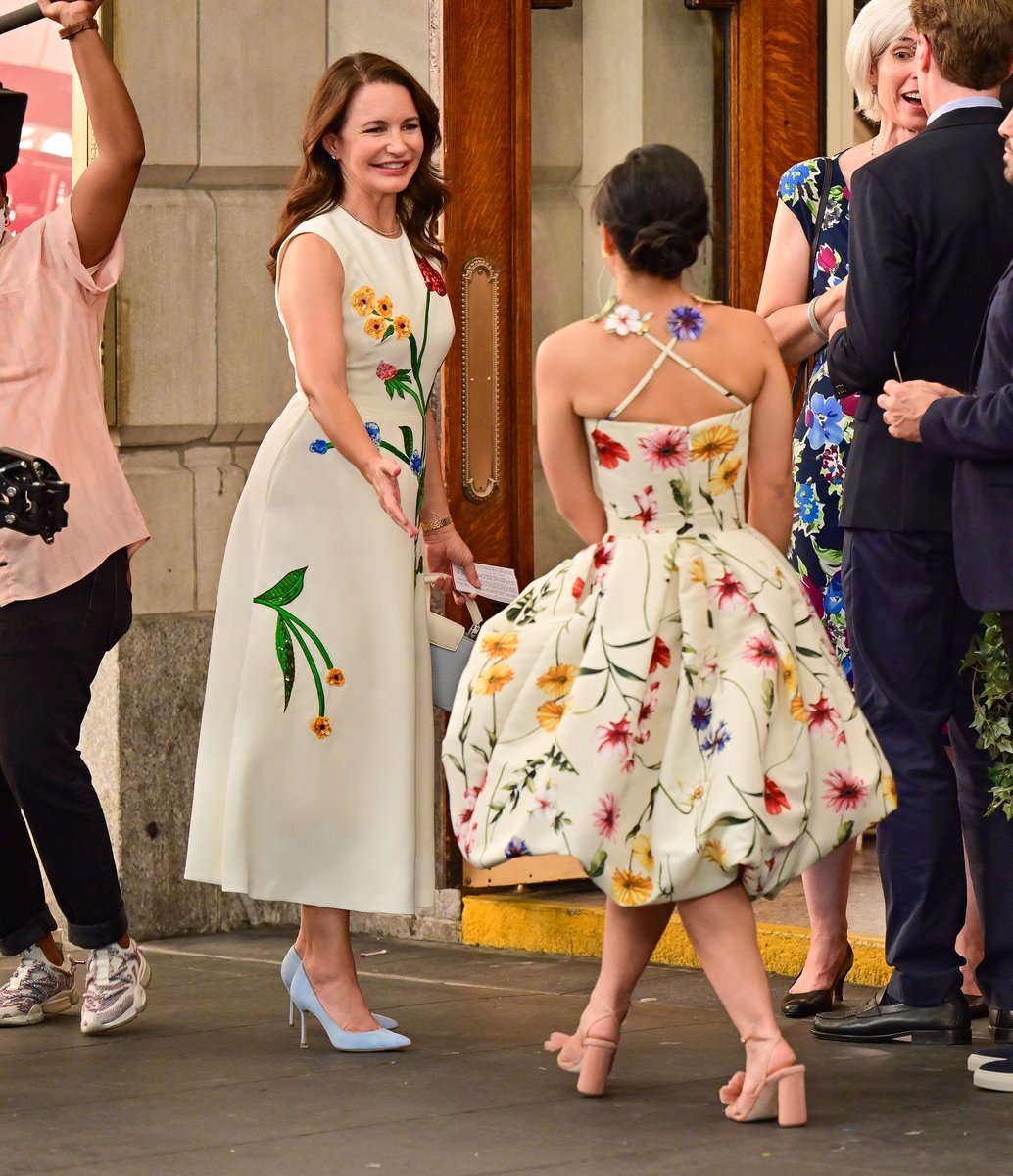 Charlotte's walking-her-dog outfit is much different to ours, as she had a Balenciaga moment in a spotted blue skirt and mustard yellow pumps. 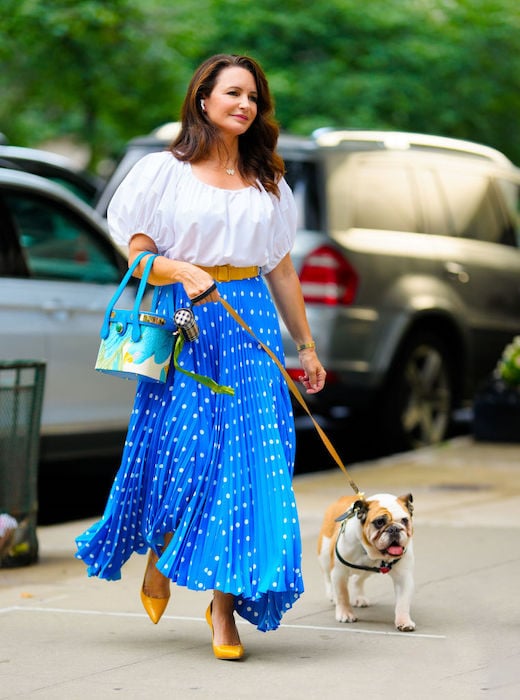 While season two is still up in the air, we can only hope a second round of the most unforgettable style moments make a return.

Reply
Upvote
I get it’s escapism and I enjoy the clothes as much as anyone but I still crave a bit of realism occasionally.  Does everyone in New York live this impossibly luxe lifestyle?  Money seems to be not an issue for anyone and I know there are impressionable people out there thinking they deserve to be living like that.  It’s one thing for Carrie with Big’s money but as you point out the other two have no resources like that or not that we’re aware of.  I guess to most people this doesn’t matter but to ever practical me it does.
M
mamamia-user-482898552 6 months ago

Reply
Upvote
1 upvotes
@webcrawler88 Carrie's always been the pauper ridiculously living outside of her means in the original series - it's really just in this spin off that her lifestyle makes sense (by way of her partner's wealth). In contrast, Charlotte has always been wealthy, and she married a lawyer so it's not hard to explain their lifestyle. Similarly, Miranda was always a wise investor with a lucrative job in law - and she bought her real estate in Brooklyn, so that mitigates the costs somewhat also.
W
webcrawler88 6 months ago

Reply
Upvote
@mamamia-user-482898552 ah there you see, I rarely watched SATC.  But in the article the author actually questions how Charlotte and Miranda can live like they do so I assumed their wealth had never been explained.  I worry about dumb stuff like people maxing out their credit cards aspiring to live like this.  And people do do that.
One thing that’s clear though is that great wealth doesn’t mean a trouble free life as AJLT demonstrates.   And often wealth brings a whole new set of problems.
And another beef I have is these programs push that the answer to everything is love.  It’s perfectly possible to have a great life without a partner.  Guess it doesn’t make good television though.
S
simple simon 6 months ago

@webcrawler88 One thing that’s clear though is that great wealth doesn’t mean a trouble free life as AJLT demonstrates.

Um, no. AJLT is a TV show. It doesn't demonstrate anything.

beef I have is these programs push that the answer to everything is love.